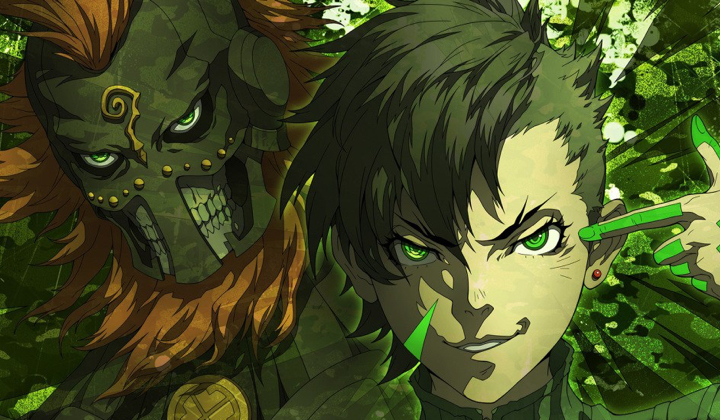 I sit here, at my desk, writing these words with my save file trembling before Apocalypse's very final boss. I have attempted it only once, but once may have to be it for now. It is a hell of a match, preempted by one of the largest dungeons to ever have been crawled and with both sections contextualized brilliantly (in most ways). My final few hours with Apocalypse reminded me of the impossible epics I always hope to find within the JRPG spectrum and I can't wait to, one day, hopefully, complete it.

These moments, among some others, were, however, sparse amidst my 100+ hour playtime. I do love Shin Megami Tensei and I may be prone to forgive it where I simply would not with similar franchises, but one can only fool me so many times before I say "Jesus Christ, shut the fuck up, Navarre!". 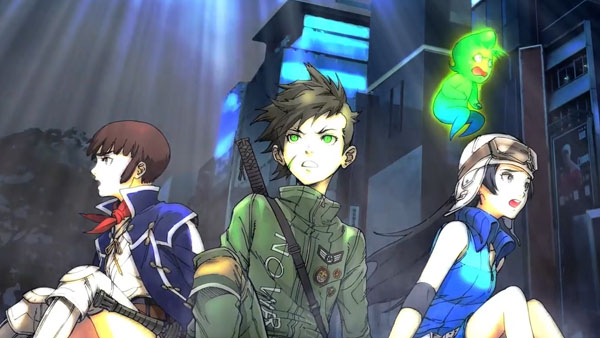 So, yes. Indeed. I haven't exhausted myself, making sure I could do all that was possible before reviewing SMTIV: Apocalypse. Had I waited until then, well, that time likely would've never come! This game is probably even longer than SMTIV proper and it's just about as difficult (if not moreso) at that. Do what you will with that information. Preferably, read on!

SMTIV: Apocalypse is, confusingly enough, not exactly a sequel, a prequel, or even an expansion. It is actually a hypothetical "sequel" that retcons some details from IV and starts you off just before IV's climatic end. Specifically, right around the time where Flynn, IV's player character, resurrects Masakado. Funny that such a concept didn't immediately turn me off to any extent, which probably speaks to how much I did love IV's narrative (clear flaws aside) and atmosphere.

In a way, for me, Apocalypse was like slipping on an old favorite pair of jeans, only now with some added chains and rips in an attempt to feel young again. Though, unfortunately, they don't fit quite as well as they used to. 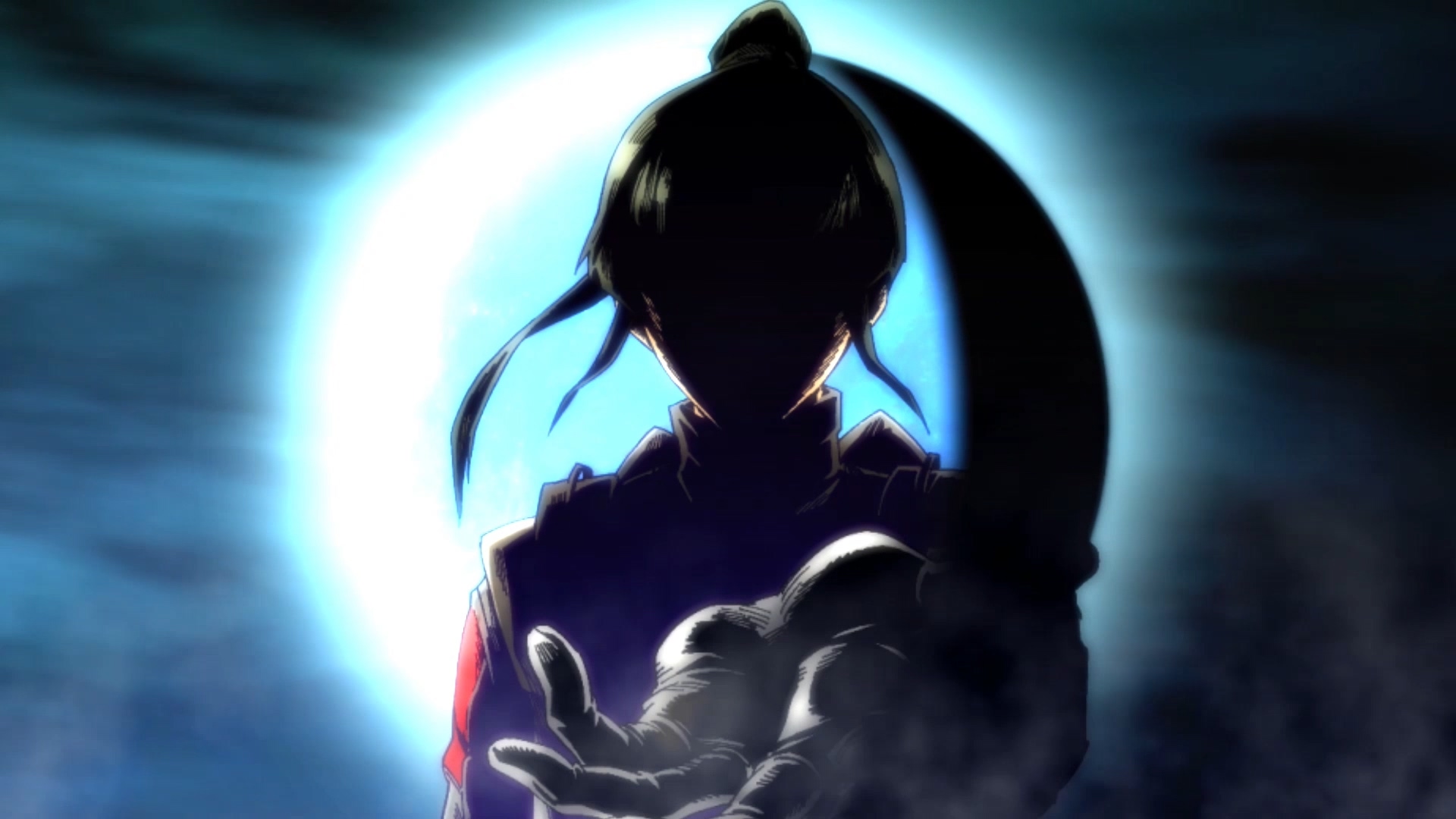 The above analogy may not be the most interesting, but it is very applicable in many ways.

Firstly, as some have already pointed out, the game's narrative is distinctly more "young adolescent male" in its appeal whilst haphazard in the execution. Much of the humor feels more clinical than natural, the characterization is dulled to about what you'd expect out of a children's cartoon, and the messaging is about as nuanced as a bullet point note stickied to the side of the screen reading "FRIENDS; UNDERSTANDING; WORKING TOGETHER".

Basically, it's Persona. But, rather than using tried and true tropes to its advantage, it relies on those tropes as crutches. Crutches that do, granted, hold up some very novel and awesome concepts. I loved the idea of Irish god Dagda keeping player character Nanashi on a leash to do his bidding, I loved the idea of a third great evil in The Divine Powers, I loved the implementation of a certain old nemesis, I actually loved many things to do with Apocalypse's narrative! I just wish they had leveraged those ideas with solid writing. 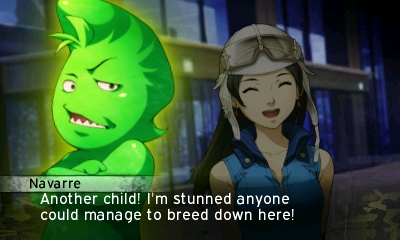 From here on, all screenshots are captured by me! (Pictured: A rare example of Apocalypse successfully making me laugh)

Navarre, an infamous favorite from SMTIV, is no longer loved to hate, but, after a point, pretty annoying. He's also now a green ghost with a cherub booty.

For having such little screentime in IV, that game proposed a character, in Navarre, that was clearly an arrogant hound, though simultaneously tragic. It wasn't so much that his characterization was subtle, but they didn't bleed his aforementioned arrogance across dozens of hours to expect us to suddenly feel bad for him when needed. Most of the time, even his more tragic elements are played for shallow laughs rather than used as anything that adds to his character. And let's not get into how they decided to explain his hilarious death.

Frustratingly, one of the new characters, Gaston, actually has a satisfying character arc! But, at the same time, he's made redundant because he's pretty much Navarre 2.0, being a blatantly self-centered Samurai of royal blood. At that point, frankly, I would've much rather seen Navarre given what he arguably deserved in SMTIV instead of bastardizing what little made us all love him some years ago in order to make way for some new douche with a fraction of the charm.

Many of the other characters don't fare a lot better, if any. Asahi, your obligatory JRPG female friend, is little more than a way to give a voice to your voiceless player character early on as she just parrots what conveniently moves along the plot. She's also there to be the one you eventually care most about saving simply by virtue of being a girl and, apparently, your friend. It's not as if there's anything else about her that sticks out besides her silly headgear. Nozomi, another older cast member, is equally as inoffensive, but with baditude. Toki, another new cast member, the same, but with even more baditude.

The only worthwhile new character is Hallelujah. He is wonderfully portrayed and even a tad interesting! Sad that his own character arc is sort of rushed along in the latter half to give us kids another super cool twist, but that twist does eventually give way to one of the better scenes throughout Apocalypse. 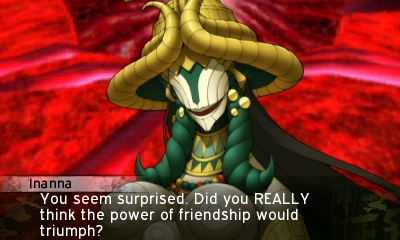 I mean, come on

I must emphasize that the story is actually not bad. Just, supremely disappointing. Thankfully, it's still nowhere near as droll as Devil Survivor or Tokyo Mirage Sessions, if only thanks to the consistently solid voice performances. I did also really enjoy Dagda, Krishna, and Odin.

However, I will give Apocalypse some up's on its pacing, which is definitely better than IV's. There weren't any mid-game lulls, nor did I ever feel like I lacked purpose in the world. This made sticking through to the better parts of Apocalypse's narrative far easier than it would've been otherwise. Had I been mindlessly wondering about Tokyo with little weight behind my actions AND with such lackluster storytelling, I would've blogged this review way sooner and observed the game with a considerably more critical eye. 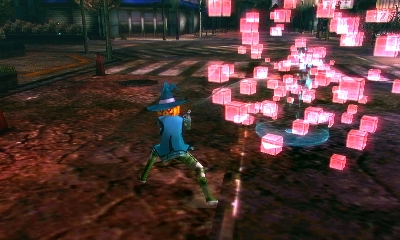 But, enough about the negatives! The good news is that they hardly ever apply to the game's other aspects.

Since vanilla SMTIV, they have made several seemingly small changes that affect the game a great deal and for the better. Things such as "Skill Affinities", which are secondary statistics layered atop the various types of demon (demons being who you use in battle) abilities. For example, one demon may have a +2 affinity for Zio attacks, but a -3 affinity for Agi attacks. It's no longer always efficient to unload just anything onto your next demon as almost all demons have at least several of these affinities.

Another great balance tweak is that you can choose a preferred human partner to fight alongside. Originally, in IV, these partners were either fixed or chosen for you, but now that design choice seems even more dumb and arbitrary! Are you dealing with higher level random encounters? You might wanna pick Isabeau or Toki. Dealing with a tough boss? Navarre can keep you buffed or Hallelujah might just save your ass in a dire pinch. These partners also free you up just a tad more to fiddle around with different character builds, even if latter-day SMT still highly encourages very strong magic builds.

I doubt mainline SMT will ever again achieve the prefered level of balance as seen in earlier titles such as Nocturne, but things were slightly more interesting this go around. 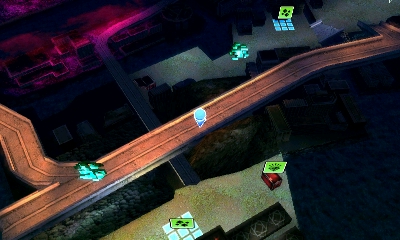 One of the more obvious changes is to the Tokyo overworld. It is approximately a thousand times better than IV's. Routes are far less convoluted and clearly laid out on the map, with you able to filter out sidequest or even relic locations. I was never once stopped in my tracks without being able to immediately correct my course and I never took any longer than a couple minutes to travel through towards where I needed to go anyway.

Though, speaking of the map, the fact that about 85% of the places you'll see in Apocalypse are places you may have already been to in IV doesn't leave a lot to the imagination. They have been reworked somewhat, with the things you'd expect like demon and loot spawns having changed, but they are practically as they were in IV. Personally, I don't find that to be an issue as a lot of the original locations were thoroughly well-designed, but others most assuredly will. Even I feel they could've explored plenty more new areas than they did. The new dungeons are welcomed and (generally) more interesting, but there are only a handful of them.

Besides that and the story, there really isn't a whole lot of bad about Apocalypse. The gameplay is still totally packed with satisfying audio/visual feedback, the plethora of additional music tracks mixed into the pool of vanilla IV tracks makes this easily one of the best video game soundtracks of all time (and I will literally fight anyone who says otherwise), demon fusion (the process of combining two or more demons to craft an entirely new one) could be considered an artform at this point, and the series staple boss fights are just as intimidating yet easily surpassed with thoughtfulness and patience (and, well, maybe a little foresight wouldn't hurt either). 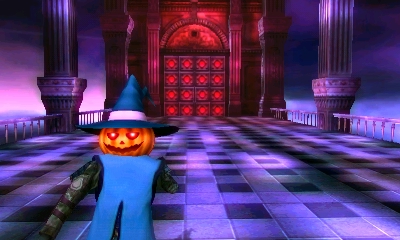 I also found the sizable amount of new armor sets to be a lot more fun to toy around with!

Apocalypse may have faltered where not many SMT games have, but that I still find it to be as good as it is should be a testament to the allure of this franchise. These systems have been honed over nearly three decades, with a definite sweet spot having been struck during the PS2 era, the ripples still being felt to this day.

To put it bluntly, there is no turn-based JRPG better than it that doesn't rhyme with "Funderhail".