3:15 PM on 08.19.2007 (server time)    0
So as most of you figured out, I survived Virginia Tech. I had a fun time. I got to get drunk with my coworkers a lot and pwn at bar trivia, played a shit ton of Guitar Hero 1 through 80's, and ate a lot of free food. I mean a lot. By the end of the week, I was fairly confident the whole thing was a front for witches who were fattening us up. I also went window shopping around town, and was disappointed to find that for some reason they don't sell VT branded rubber duckies. I can't imagine why not.

I'm not sure if it's a trick of the light or what, but look at that kid's forehead. I'm betting werewolf. And now, a rant:

With the God of War / PSTriple contest, there have been a ton of new users signing up for the site. Not only is this to be expected, this is certainly what Niero wants. There's a ton of DToid lurkers out there who haven't taken the time to join up yet. This gives them a reason to, and as a result our community grows.

We're going to see increases in both win and suck. Sure, there's a lot of people who are just joining to enter the contest. They'll probably spam the community blogs for a while, then fade away once their chance to win is over. This will happen no matter how much we complain about it. Niero's on the ball. I'm fairly certain he doesn't require sleep or know fear. The people who are blatantly blog spamming are going to get flagged, and they'll be taken care of internally. We'll also hopefully attract a lot of awesome users who will bring more awesome to the already awesome level of awesomeness.

We had a bit of a bitch fit about elitism on the forums a while back. Some users were starting to seriously rape the noobs, and as a result things were begining to go beyond friendly hazing and straight into pure asshattery. That's taking things a bit too far. Everyone new is going to take some lumps in good fun at first. But putting every new user in the same boat and attacking them on sight is going to make us look like a collection of pricks. When people are fucking up, we can offer constructive advice rather than "GTFO mah DTOID!!!" The good noobs are going to rise to the top over time. The bad ones will eventually go away on their own. Let's try to be a bit more open-minded about them, have fun, and show everyone why Destructoid is the greatest community out there.

A few other random thoughts:

- Community Blogs shouldn't have to be just about games all the time. Everyone here is connected by their love of [url=http://en.wikipedia.org/wiki/I'm_O.K_-_A_Murder_Simulator]murder simulators[/url], but that's not the only thing that defines us. For the most part, we're a group of friends who like to joke and fuck around with one another. Some of my favorite blog posts here have had absolutely nothing to do with games.

- By getting into flame wars on sucky blogs, all you're doing is increasing the user's views and number of comments. Let's not add more fuel to the fail. Also, as far as the blog stats go... We're talking about imaginary internet points here. ZOMG SERIOUS BUSINESS.

- Use your friends list, and check out the last few archive pages on the Community Blog section. There's going to be a flood of crap blogs for a while. It's unavoidable. If you enjoy reading someone's work, it's easy enough to find.

- [url=http://en.wikipedia.org/wiki/Bill_&_Ted's_Excellent_Adventure]Bill & Ted's Excellent Adventure[/url] still manages to hold up to this day as a classic comedy. Bill & Ted's Bogus Journey, not so much. Good Robot Bill and Ted are still cool though.

I'm really fucking tired, and not sure how coherent this is. I'll probably clean it up later tonight and add more random links. Anyway, I just wanted to say I want to bang each and every one of you, and thanks for helping to make Destructoid as rad as it is. Let's all work to keep it that way.
#Alsococks    #Community
Login to vote this up!

Aaron "Mxy" Yost was an admin for the Dtoid Forums, and hosted/produced the Radio Destructoid podcast with some of the other Dtoid community managers. He also has a dark secret that must never be revealed, lest the world be split asunder.

Pronunciation: "Miks-yez-pit-lik" Most people just pronounce it "Mixie" for short.

I'm a riddle, wrapped in a mystery, inside an enigma; but perhaps there is a key. That key is Russian national interest.

I am a tale told by an idiot, full of sound and fury, signifying nothing.

I'm not sorry for the things I've said. There's a wild man in my head.

I am two with nature.

I mostly come at night... Mostly.

I'm an alligator, I'm a mama-papa coming for you.

I'm the space invader, I'll be a rock 'n' rollin' bitch for
you. 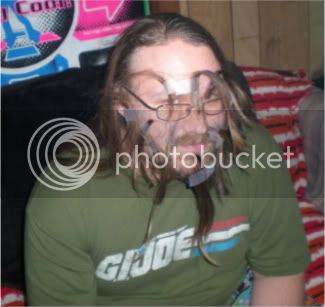 You should listen to Radio Destructoid! It's the best podcast ever, except for those other ones that are better.

You can also listen to our ravings about geek culture every week on Airport Road: The Podcast!

Much love to domataos for my cblog banner, itemforty for my avatar, and The GHost for my DToid card, as well as every single Dtoider out there for helping to make this the best community on the Interwebs.