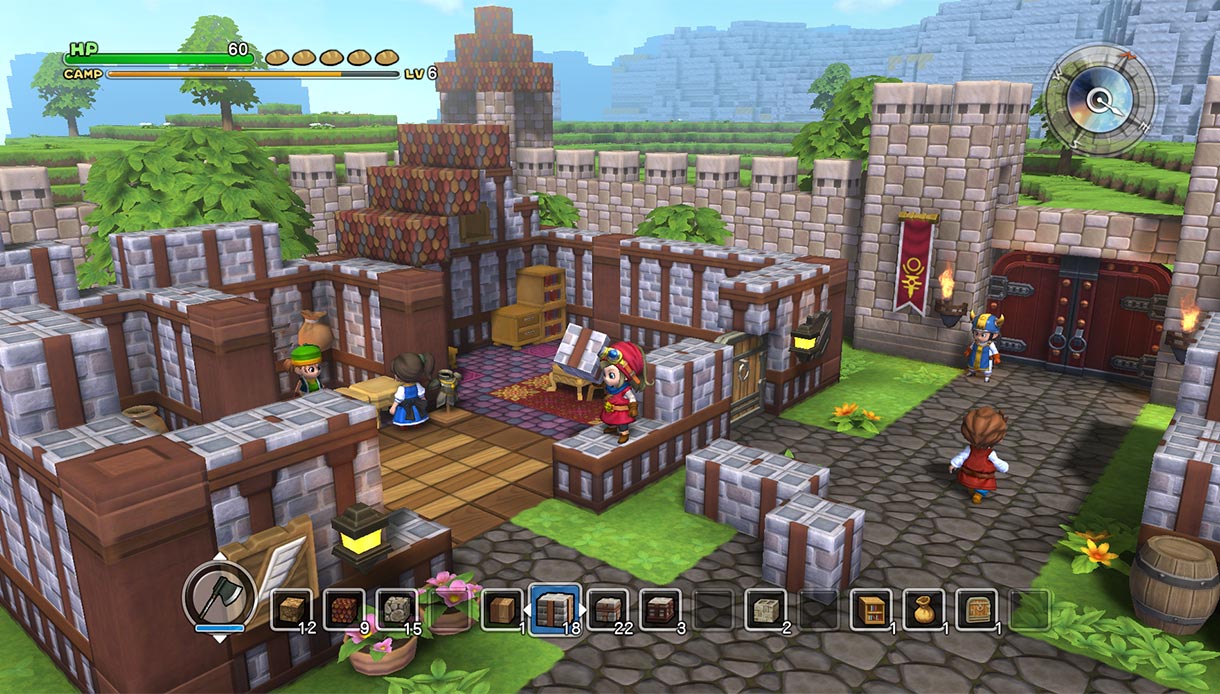 Sweet n’ savory Jesus, there have been a lot of Minecraft clones in the preceding years of that game’s rise to popularity. The unnecessary and uncreative use of “voxel” graphics, crafting mechanics, day/night systems, randomly generated terrain, and of course tree punching have flooded easy-access marketplaces like Steam. So how did I like the demo for a game that has literally every one of those boxes ticked in its description?

I actually liked it a whole bunch.

I’ve tried my hand at plenty of Minecraft clones, many of which are early access titles that go nowhere, and I’ve played some games that have clearly been inspired by Minecraft like Terraria and its close cousin Starbound. Every game in this now-prolific genre of blocky crafting games has its own focus on crafting or survival or combat or story. Minecraft itself would become more story and survival oriented, but it has its roots in an open sandbox for crafting (hence the name). So where does Dragon Quest Builders fit into this tapestry? Well, the demo doesn’t offer a whole lot for you to do, but that alone says a lot about how the game operates in comparison to other Minecraft spin offs.

Being a Dragon Quest property, the focus thus far seems to be heavily on story and questing rather than being a sandbox. For those that always wanted more direction out of Minecraft-like games, Builders will probably offer that just like Terraria did but in a big budget 3D package. Unlike Minecraft, the game gates off your ability to make things and go places by only letting you gain the insight (the recipe) to build it after some kind of quest oriented interaction. By the end of the demo, all I could do was make straw doors and beds, break and place dirt blocks, make some basic stick weapons, and other little objects like torches and pots as well as healing and utility items.

Pretty much all of those things were unlocked by talking to NPCs who would show up and give you a reason to do something like make a cooking station or a straw bed. It’s all couched in the idea that you’re rebuilding a once-great city that has been destroyed in a great calamity, and I presume you’ll go on to rebuild many different cities. This one is Cantlin and by the demo’s end I accrued three NPCs who would ask me to make them sleeping quarters and do things like fetch items or make food. It’s all quite rigid in its progression, but I can imagine this kind of structure is what a lot of people felt was missing from Minecraft and a lot of its earlier clones.

Being a console-only title and a third person game, control and block placement was a worry for me going in. But they’ve managed to do a good enough job by giving clear outlines for placement and not relying on camera position too much. Instead you hold L1 or R1 to place a block below or above you while also locking your heading so you can strafe to place multiple blocks. Holding both shoulder buttons keeps the block height at the middle level. Everything is kept on an inventory bar, which actually represents the entirety of your inventory and not just a hotbar like in Minecraft. Thankfully, items all seem to stack to 99. Weapons are kept on a separate toolbar selected by pressing up or down on the d-pad and used by pressing triangle, which works well enough except it overrides the block placement outline so you’ll sometimes have to re-select a block to gain back the outline.

Another concern with the third person perspective was how layers would operate, as every video I had seen showed houses with no ceiling. Well, unless the demo works differently, there doesn’t seem to be a solution to this. You can place a ceiling, but you won’t be able to see through it. The game will show you an outline of your character, but not of anything else, making navigating or using work stations impossible unless you angle the camera under the ceiling. It doesn’t seem to be necessary to build ceilings, but not doing so seems a little silly especially when you have NPCs sleeping in their beds in the rain. But the game doesn’t seem to care since it only “looks” at the first two layers of a room, which brings me to the base building mechanic.

Part of the structuring of the Minecraft formula employed by Builders is a rated base building mechanic that awards points for adding things to your base and eventually allows you to level up your base as shown by a big bar on top of the screen at all times. Like with Terraria, specific things are checked for by the game for an area to be counted as a valid “room” that an NPC can use and that adds points to your base. You need fully enclosed walls two layers high, a door, and a light source. Adding anything else changes it from an “empty room” to a cooking station or a work station or a bedroom or whatever else, which all award even more points. The only valid building area is within a sunny area around your base that will expand as your base levels up. Funnily enough, you don’t level up at all, nor do you gain experience points, which is something the demo goes to some lengths to remind you.

The whole thing is ushered from the start by an unseen goddess voice who speaks glibly to your apparently lazy character about being the only person who knows how to build things. The game waves the silly premise away by literally saying “what do you mean you don’t get it?” which is good enough for me. The whole affair takes itself pretty lightly, as the actual Dragon Quest games tend to do despite their flowery language and classic high fantasy roots.

The combat is really only worth touching on briefly. You swing a sword, you do damage, the enemy tries to swing back but you can step away to avoid their hit. Repeat until dead. Combat isn’t the focus, but it does play enough of a role to where I wonder if the shallowness won’t get boring. Enemy hordes will apparently raid your base and test your defenses (or your ability to fight them), and while I expect other weapons and possibly magic to enter the combat aspect, I don’t expect anything too compelling. Killing monsters usually yields materials, so unless you need an enemy’s drops, it’s not necessary to go picking fights.

I’m really curious to see how the crafting pans out as you progress in the game. The demo only gave you the tools to break and place dirt blocks, and you’re kept on an island with few resources but apparently the ability to build bridges is another thing you need to magically “recover” the ability to do. I tried digging down, but quickly hit stone. I tried swimming but you just drop through the water and lose 15 HP. Blocks do apparently float, unless some other block type doesn’t like how sand operates in Minecraft. I didn’t test the max block height since I didn’t notice an easy way to place blocks underneath you to build straight up, but I suspect the ceiling isn’t terribly high.

For my purposes, I hope the game offers a lot of fun building and crafting opportunities since that’s what I most enjoy doing in Minecraft. I can get on board with the questing up to a point, but “quests” in games like these tend to operate more like errands and feel like them after a while. I’d be interested to see if there’s a kind of creative mode, perhaps unlocked after finishing the main storyline or something, so I can just make stuff without the need to tend to a base or my own hunger meter.