Acidrain REVIEW - Where the Sky Can Kill You at Any Moment

WoblyWare is known for selection fun little platformers on the flash games scene, namely gems like Devious Dungeons, Random Heroes, and League of Evil. Albeit a smaller gem, Acidrain is still a rather solid one. It's by no means perfect, but the fast-paced skill based platformer does have a fun concept coupled with a rather fun execution. The whole premise of the game is simple, as games of its kind tend to be; the goal is to get the player character home safely in a shower of acid rain. Simple enough, right?

The gameplay is standard platforming: two arrow keys for moving left and right, and the good ol' [x] key to jump. Avoiding obstacles as you get to the next screen, and further to  your house, is the sole objective. For there only being about four of them, the obstacles themselves are decently varied. The zombies and zombie hands are both systematic and simply require timing, and the pits of acid require a simple leap, but the interesting twist is the acid rain. The rain is randomly generated, with each drop at a different place and different speed, making it a new challenge each time you try a screen. It can feel kinda cheap at times, as it sorta feels like there are times where you timed everything perfectly just to be screwed over by a random drop of rain, and can be a bit frustrating at times. 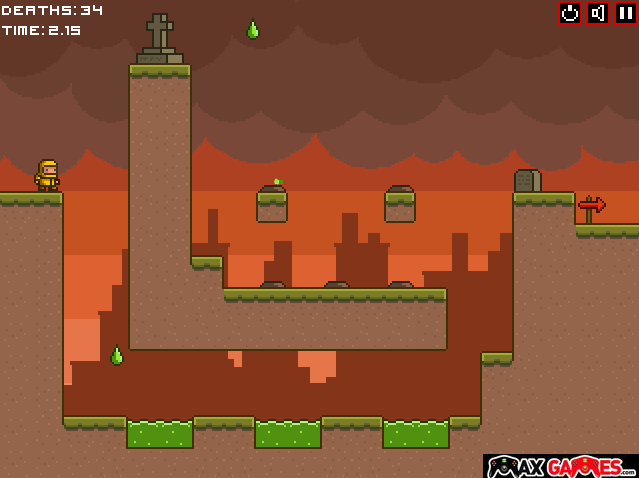 The player traverses everything on a single screen, and once you get to the next screen that beginning of the screen is your new checkpoint. This in conjunction with the instant respawning makes for very fast paced flow akin to that of Super Meat Boy. That being said, the player character moves a bit fast, and with so much going on a times it can become very easy to accidentally overstep your intended pace and get yourself killed. Everything is an instant death, but because of the aforementioned instant respawning it isn't too terrible.

There is a legitimate level of difficulty to it all. They're not exactly too memorable or anything, but the levels are well designed and fun for the short bursts of throwing yourself at the other side of the screen until you make it. Interesting ideas, like making every space you have to jump on have a zombie hand periodically coming out of the ground, works very well to keep you on your toes. While there are plenty of unfair moments with the rain and a few exact jumps, there is also a lot of deaths to be allotted to the player's ineptitude. 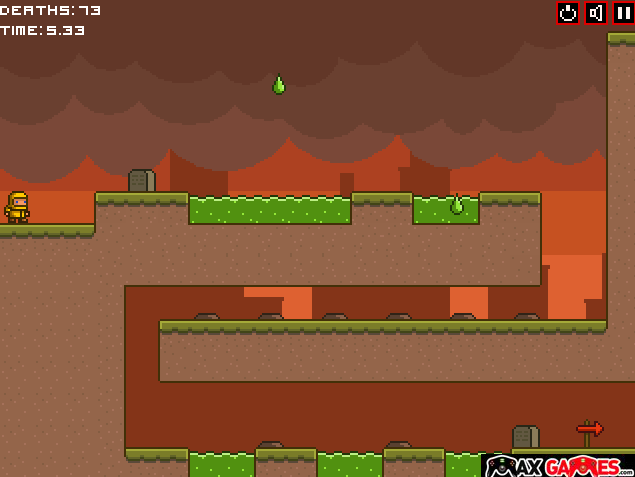 The aesthetics are exactly that of a WoblyWare game. Anyone who has played one of their other titles knows their style of pixels. The color pallet is full browns, oranges, greens, and grays, and all work well together to create a somewhat dreary visual setup. This, in turn, works well with the chip tune track playing in the background. It's serious tone works with the visuals to make things seem more dangerous, and the fast pace works well to support the gameplay's pacing. They're not things that exactly catch you off guard or anything, but they work and work well.

All that beging said, that previous sentence could be used to describe the whole of Acidrain. It's a nifty little game that does that it does well. There are a few problems that unnecessarily add to difficulty, but even so it's still fun, and quick too. More levels definitely would've been fun, but as a flash game it's enjoyable for what it is.