The Problem with the Word Video Game

You know, there are a lot of dicks in an art museum. Stroll on in, look around, and you're going to see some cock. And these cocks are going to come at you in different ways. Some will be paintings of dick; others will be sculptures of dick; you might even find a multimedia cock crafted from wires and bottle caps. And all of these can be found in the same place, under the same roof, all within this wonderful house of cock. And the same stuffy people will hold their chins and nod while staring deeply into the dickhole of these masterfully crafted examples of sexual anatomy. And you know why?

Because they're all art.

Going to the museum: A family experience.

Now, you're probably wondering what dicks have to do with video games--I'm just kidding; this is Destructoid after all. But the point here is that no matter the medium of cock-craft, all these dicks are created equally. No one wonders if these dicks are art, because art is such a vague term that discussing what is and isn't art only riles coffee shop Philosophy majors who think they have a hot take on a centuries old topic that will make us spit out our frapamocoachokaooolalachinos and realize how totally worth fifty grand that degree was. Sure, some of these dicks are good art dicks and others are bad art dicks, and that's for enthusiasts and critics alike to decide. But saying dicks aren't art is dumb. I think this is something we can all agree on.

Much like cocks, art matures; it strengthens; it grows. And sometimes it can be hard to take in all at once. Video games have been, for a handful of years now, reaching this point where artists are advancing beyond the medium. We are now experiencing our own multimedia cock renaissance in which interactive stories are becoming a part of our lexicon. These fall somewhere between a movie and a game, and we're pushing against them. But why?

Not that I'm saying that it isn't fun to push against a dick. 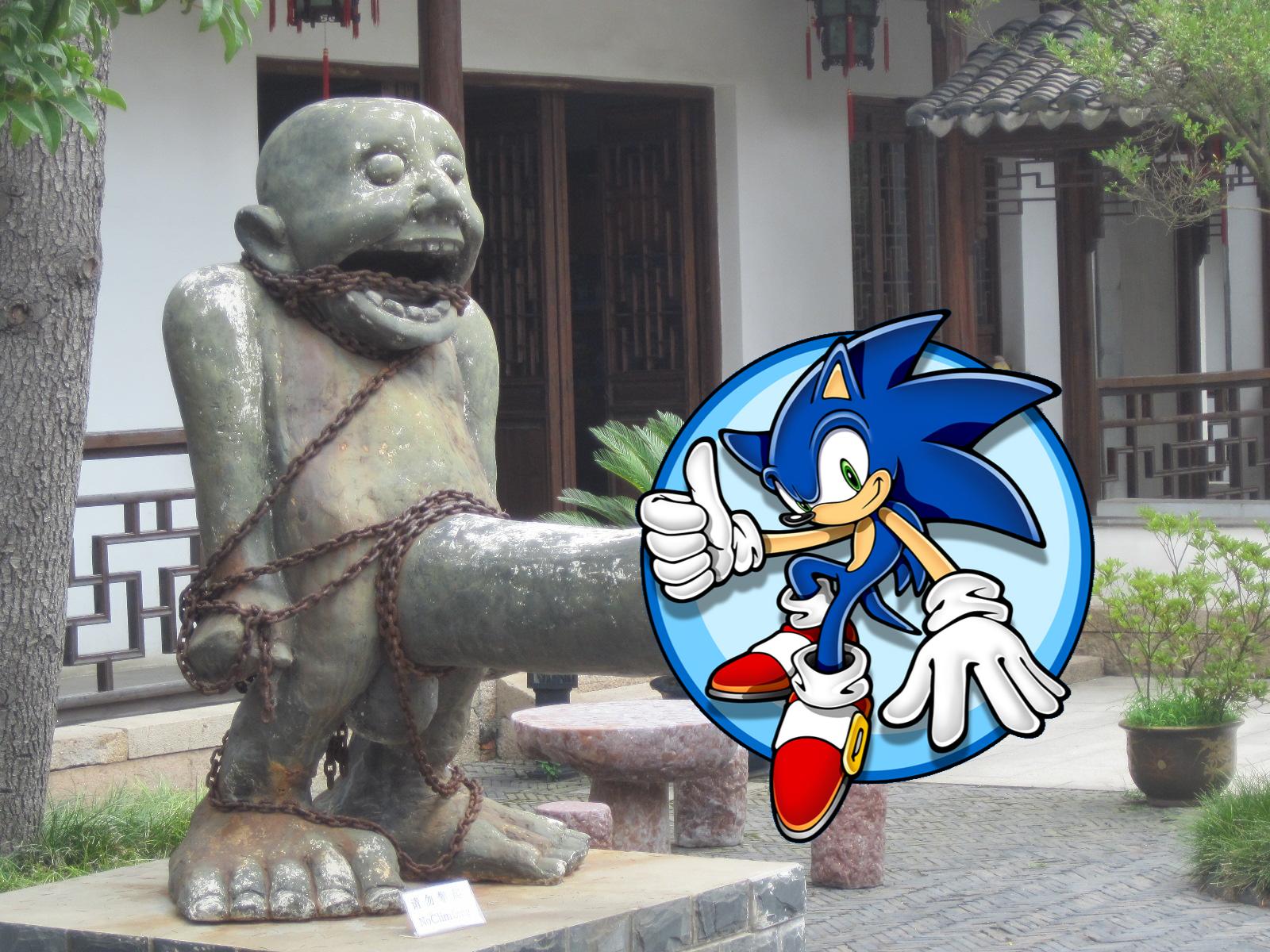 Sonic is a fan of the girth.

The problem is that we know what a video game should be. From its inception forty-odd years ago to define one bloop getting bleeped around on a piece of military equipment, video games define interactive experiences in which a person can win, get a high score, can use skills or problem-solving techniques to advance. But we're reaching a point where that definition is being stretched to its limits by experiences deemed "walking simulators." These are still great experiences that artists have poured their hearts into that deserve to exist and be apreciated by others. They're not going anywhere; in fact, they're only getting bigger. Like dicks.

But they don't exactly fall into what a video game is the same way that a painter would look over and see a sculpted cock pointing stiffly from a statue's crotch and think, "Fuck, that thing's coming right at me! That's not a painting!" And he's right. It's not a painting. But it's still art.

And these interactive stories are still the same thing as games. They're made using the same software; they're designed to be interacted with on the same platforms where we shoot bang the terrorists. They should be for sale on the same storefronts, and they should be reviewed by the same critics who review Cocks of War 86: Rough Insertion, because these are the same people who wil cry like babies playing Journey. Video game critics and enthusiasts alike, we're the people who like to interact with our stories. We're the ones who know the feeling of picking up a controller or sitting at a keyboard and getting lost in digital worlds. We are the most fitting audience for these experiences, whether or not all of us would be interested in them. Some art fans only like wood-carved cocks while others can only appreciate metal-work cocks, but that doesn't invalidate either dick's reason to exist. And that's important.

I don't know what this is or what it's made of, but we can all agree that it's probably a dick.

Maybe video game as a word is outdated, archaic. Maybe we need a new word, a bigger word, an umbrella term for all the interactive experiences on the continuum between Gone Home and Space Invaders, something that will tie everything together, so we won't need to discuss what is and isn't and focus more on only what is good and bad and what we like and don't. Or maybe we don't need anything at all--but if that's the case, then everything I just wrote is a huge waste of fucking time, and we're not about to go down that path.

So, what would be our new word, our umbrella term? Something to let the walking sims, the visual novels, the point-and-clicks, the RPGs, the shooters, the hack-and-slashes, the fighters, and the arcade bleepy bloops all live in harmony?

eArt? Maybe? I thnk that if you put an "e" in front of something that makes it all cool, futuristic, digital, and shit. eArt. Yeah, that's a word I can imagine some business suit dropping three hundred times at the next E3 conference. I'm sure you guys and gals will be able to think of much cooler and hipper words than I can, and I look forward to seeing them.

So, I refered to male genitals like thirty times in under a thousand words. I'm going to consider this a success.