Hindsight is a fascinating thing. I enjoy looking back at media from the past, such as articles, news, and video speculating on topics from both the near and distant future. Whether it is the outcome of an athletic event, national event, or hype for a movie, it is interesting to see just how people predicted the future. Sometimes, people were so confident on the result of something, just to turn out completely wrong. 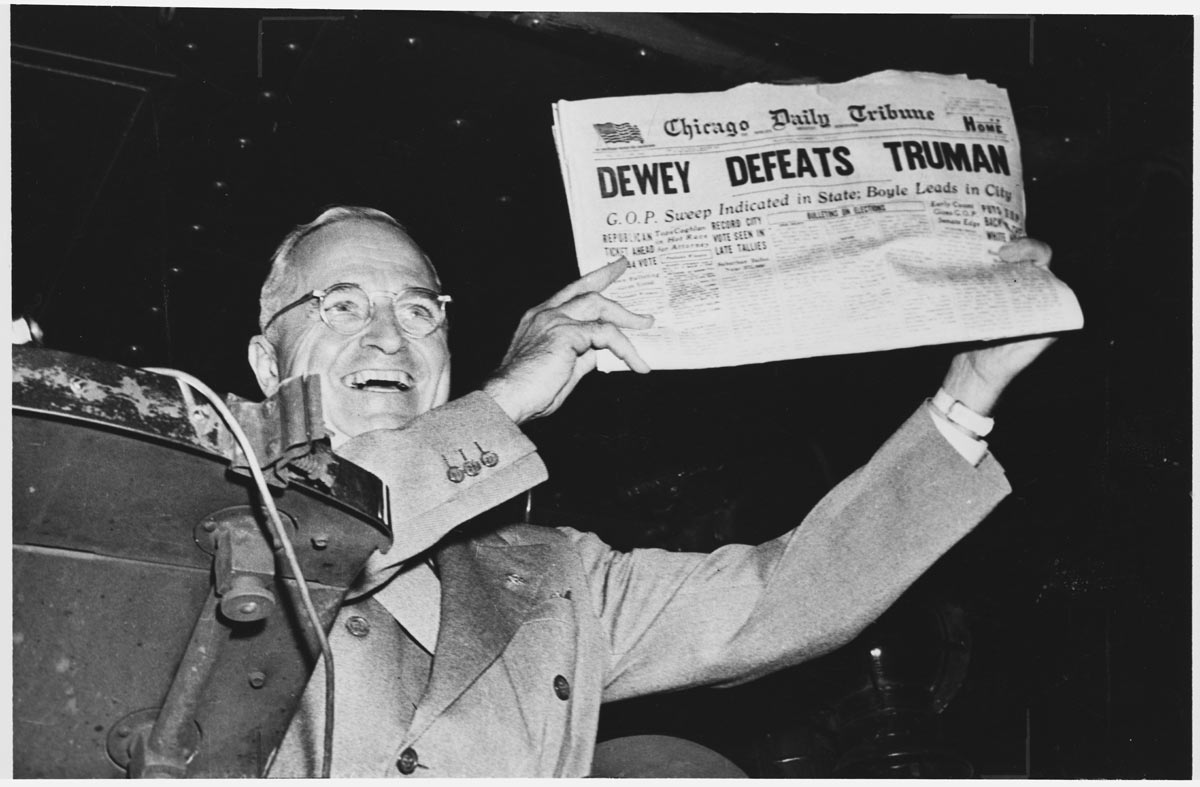 The video game industry is certainly no stranger to hype. Companies hold press conferences at expos such as E3 and often drum up publicity years before a game is actually released. Sometimes, a game is never released, or changes so much during development that the final product looks nothing like what was initially presented. There is often so much speculation on games and systems shrouded in mystery. When the product is finally released, it is amusing to look back at fan theories based on limited information to see what could have been.

This is the third installment in a series where I have flipped through old issues of Nintendo Power to view big announcements and hype for upcoming releases with the benefit of hindsight. The first installment looked at beta/unreleased versions of games for the SNES and N64, while the second installment focused on cancelled games for the SNES. Today, I would like to show you what I found on hardware and accessories while flipping through issues of Nintendo Power. 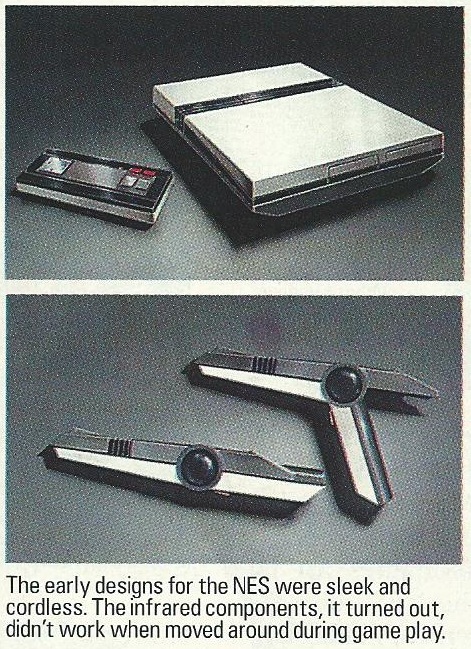 The first example comes from a retrospective on the 10th anniversary of the NES. Sort of hindsight with hindsight, if you will. It featured concept art of an early design of the NES, which was intended to be cordless and use infrared technology. It is interesting that, transitioning from the Famicom to the NES, the system could have gone from hardwired controllers to completely wire-free controllers. 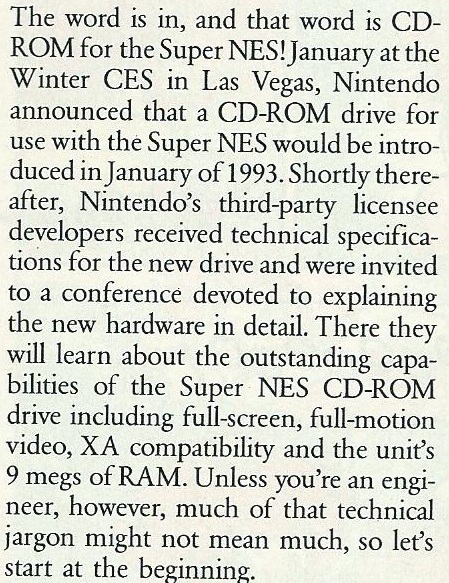 Some of the earlier issues of Nintendo Power in my possession covered the upcoming SNES-CD, a CD drive add-on to the system. One article went into depth on the advantages of CD-ROMs over cartridges as well as how the technology worked. 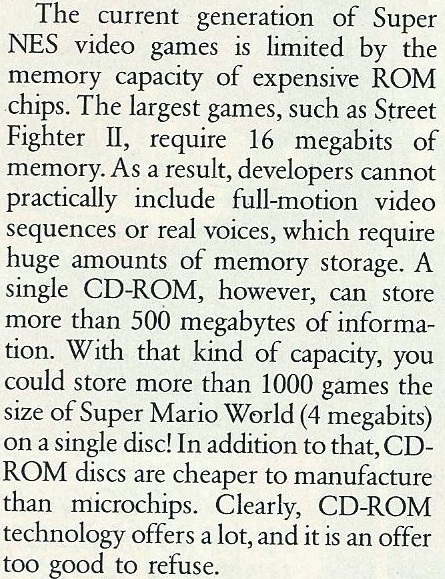 The article claimed that SNES games would feature full motion video, voice acting, and enhanced possibilities for both video gaming and learning. It even discussed then-current PC games such as The 7th Guest and digital encyclopedias.

Interestingly enough, the game is referred to as Guest here.

For $200, much cheaper than personal computers at the time, the SNES-CD could be yours. The article mentions that the peripheral was produced in collaboration with Philips, with no mention of the previous intended collaboration with, and break from, Sony. 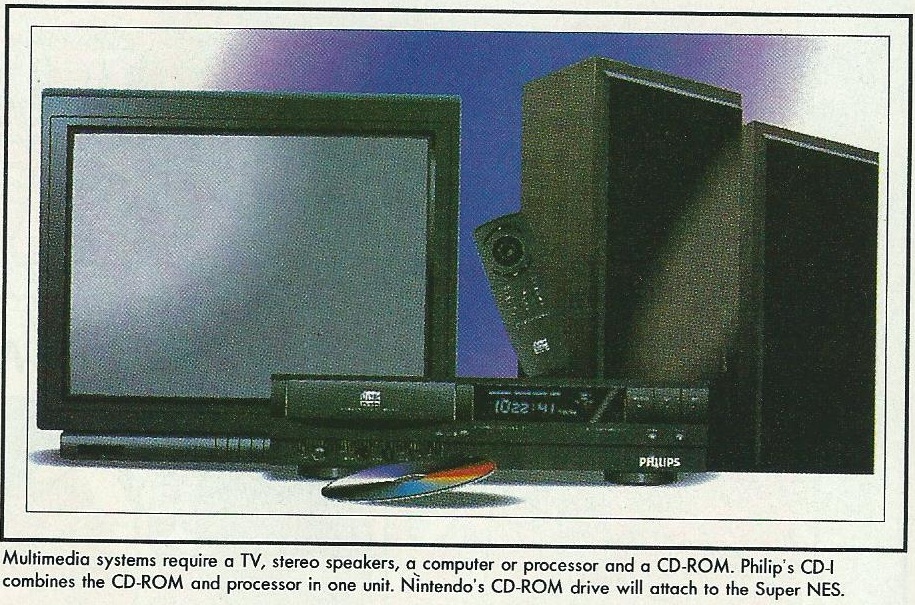 At the writing of this article, the Philips CD-I had just been released. 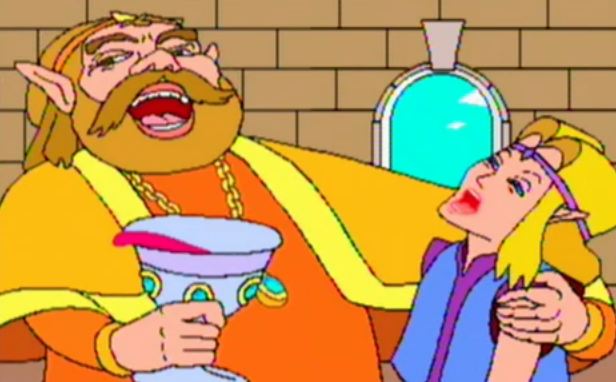 And we all know how well that turned out.

A few issues later, a notice at the beginning of an issue claimed that the CD add-on would feature a 32 bit processor and that details on the system would appear soon thereafter. 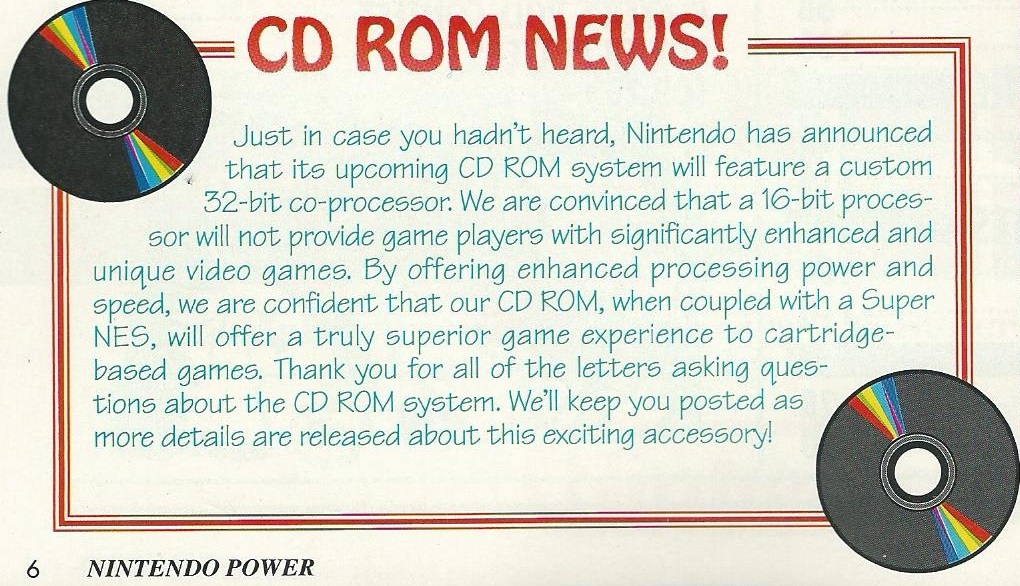 I am not sure if the cancellation of the system was mentioned, as I have a yearlong gap in my Nintendo Power issues after that. But fear not, Nintendo fans, there would be plenty of SNES accessories on the way! 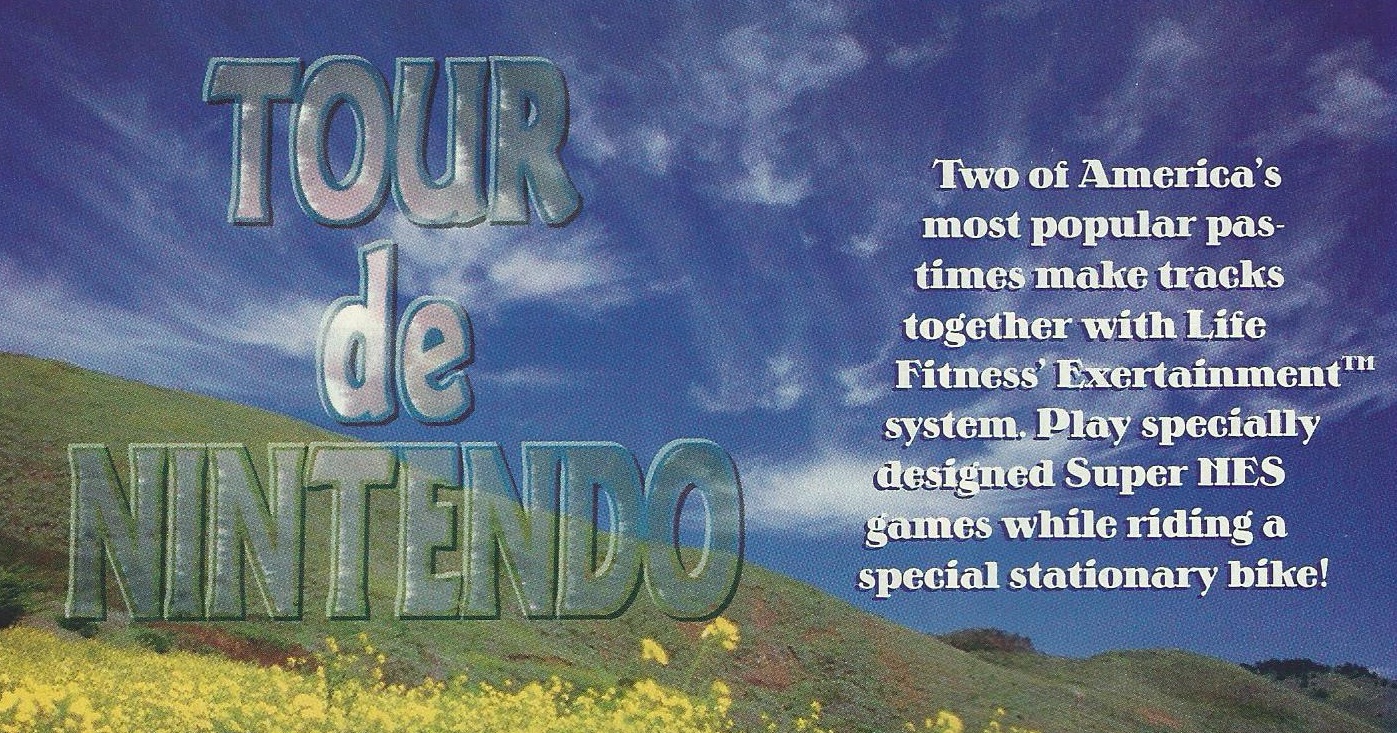 Combining exercise and gaming is the Nintendo Life Fitness Entertainment cycle, a full-sized stationary exercise bike. Instead of pushing or holding down a button during a racing game, you could instead pedal to build up speed. 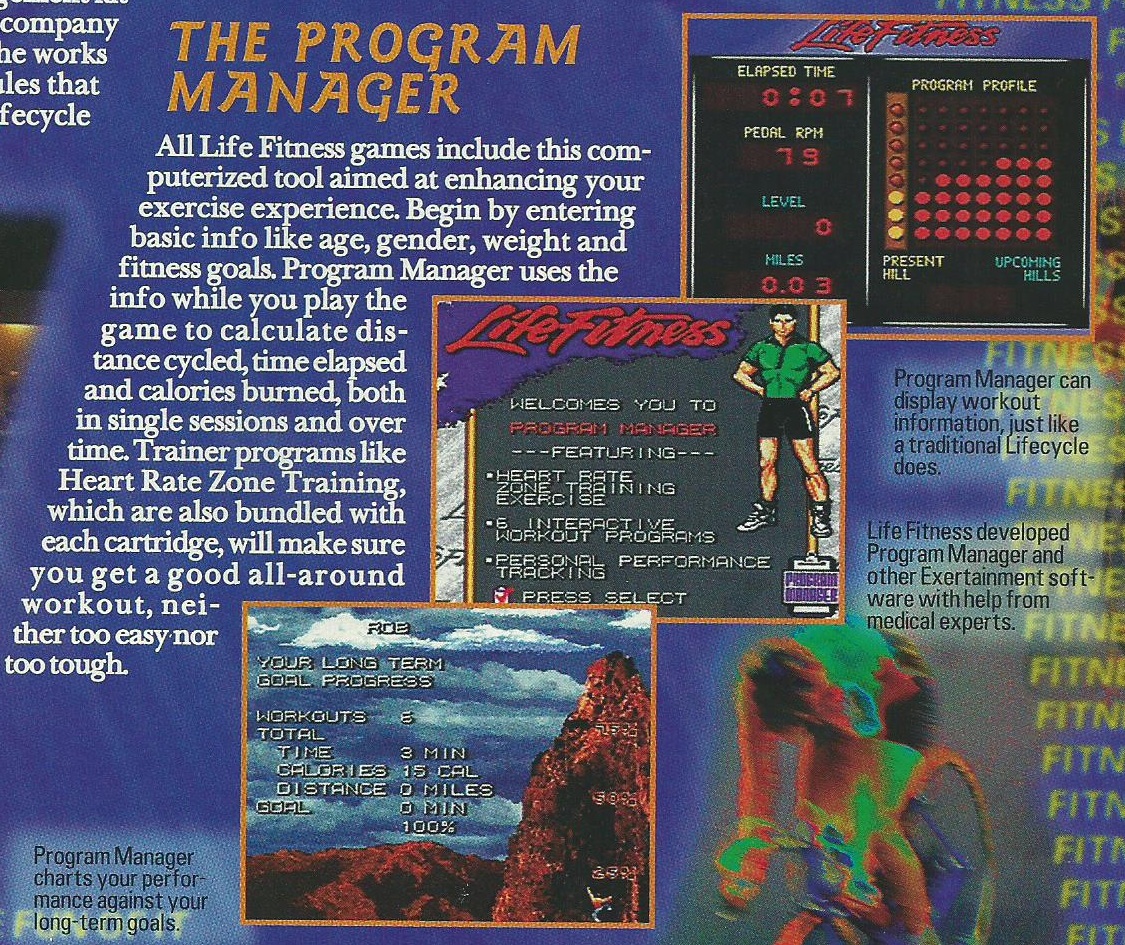 The system was bundled with two games, the first being Program Manager, an exercise tool used to measure distance travelled, calories burned, and keep track of your fitness goals. 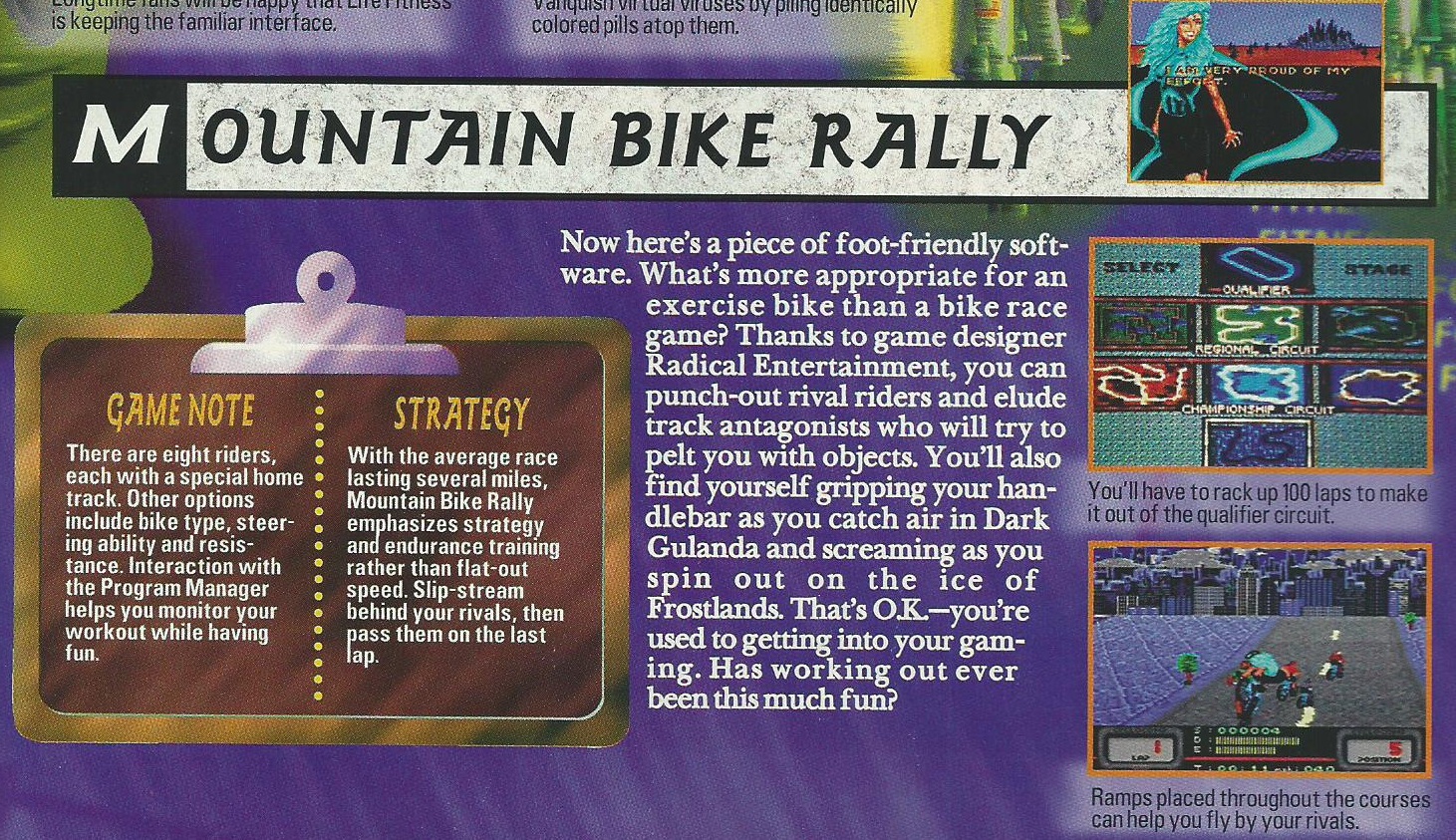 The second bundled title was Mountain Bike Rally, a more traditional sports game made to show off the gaming capabilities of the bike.

Several models of the cycle were to be sold, including one with a television built into the bike, and one which could be used independently of an SNES. The article also mentions that an SNES treadmill and stairstepper were also being developed.

Partly due to a hefty price tag and limited selection of compatible games, the Life Fitness cycle did not sell well and is considered a collector’s item today, with games and cycles easily selling for over $1,000. 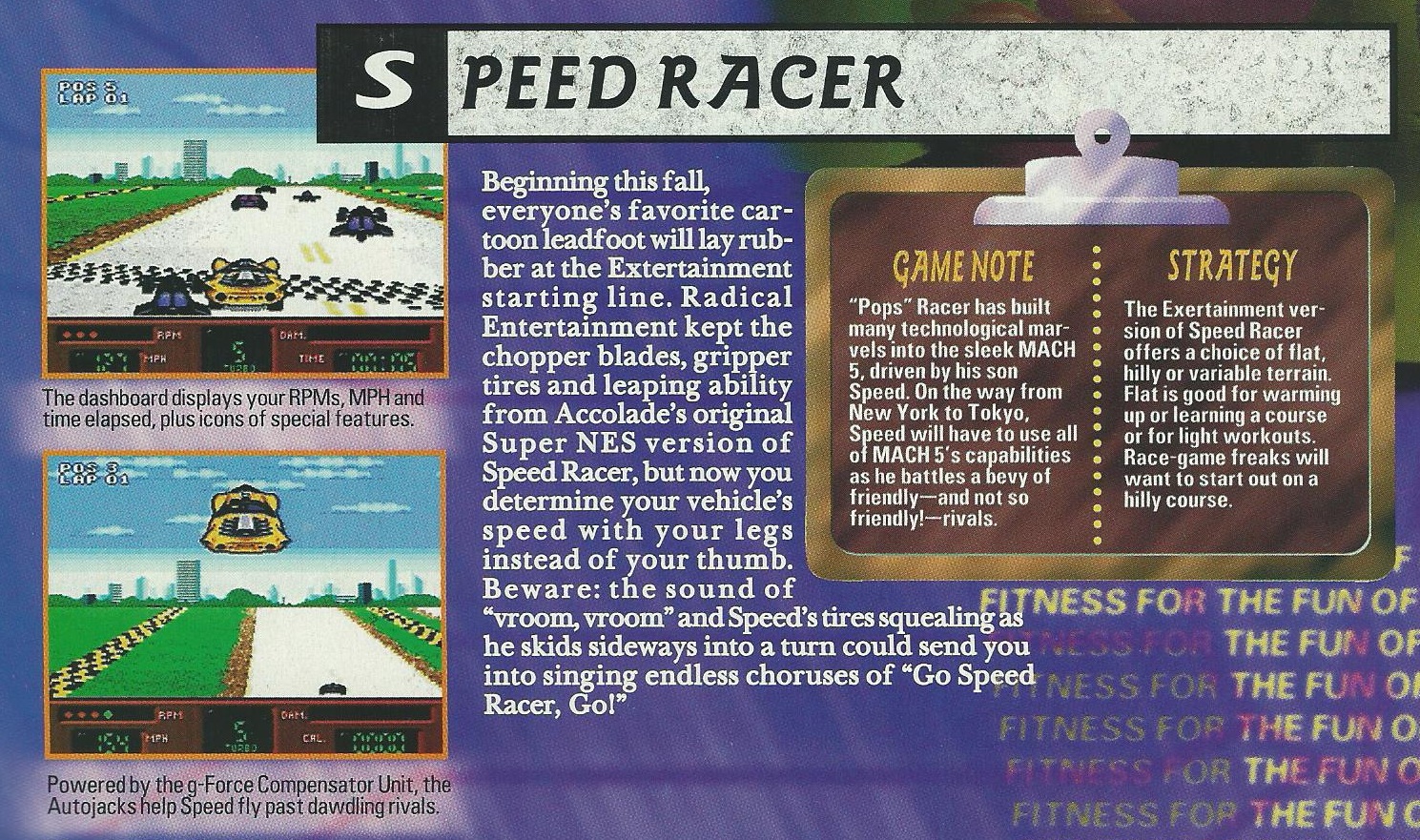 Only one other game was developed for the cycle, a bundle of Mountain Bike Rally and Speed Racer. 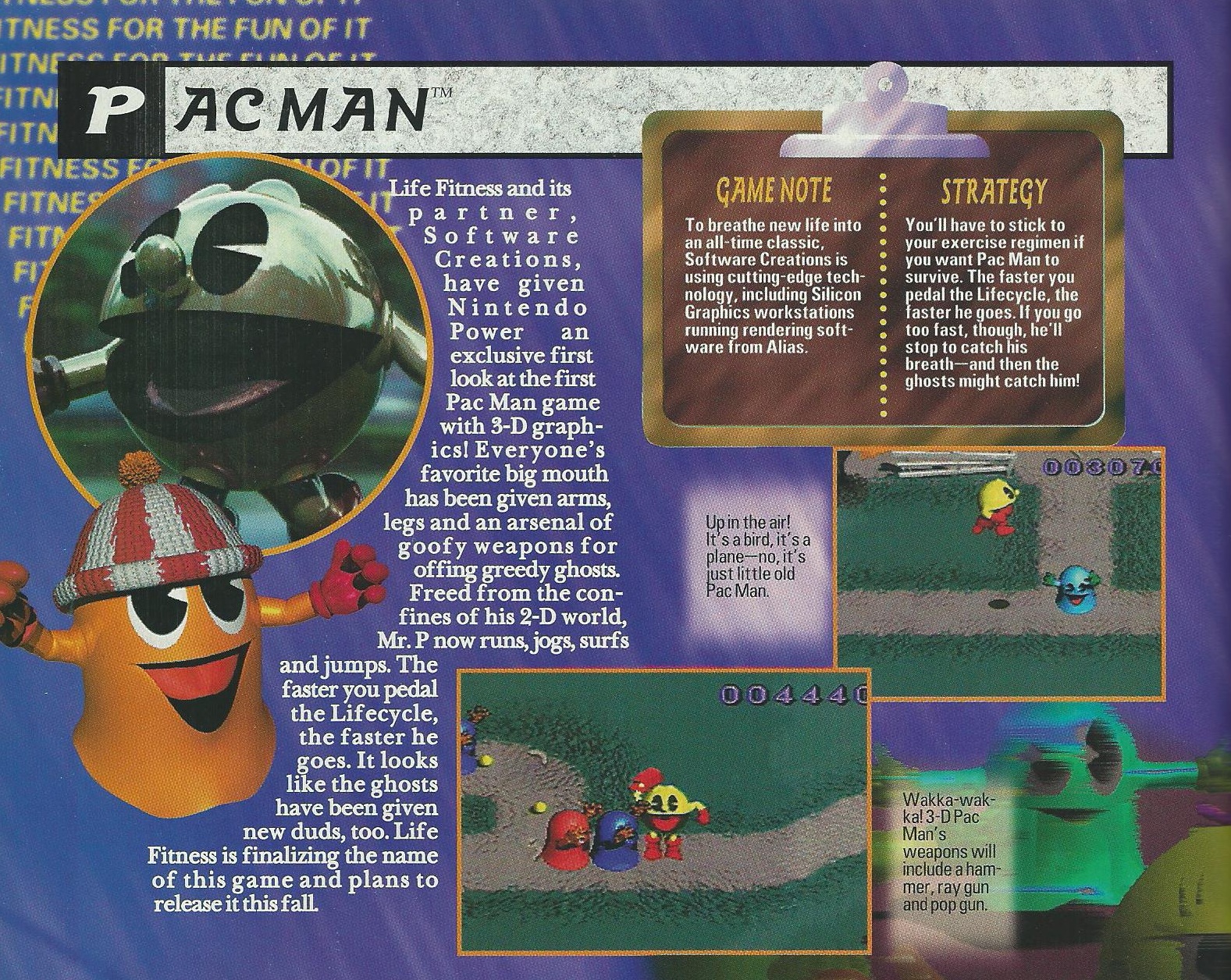 However, in the article covering the cycle, two additional games were mentioned. The first was a 3D Pac-Man title that looked like a type of platformer. If pedaling controlled Pac-Man, I’m not sure how quick turns and sudden stops would be measured. It was also mentioned that pedaling too quickly would cause Pac-Man to stop to catch his breath, an interesting gameplay mechanic. 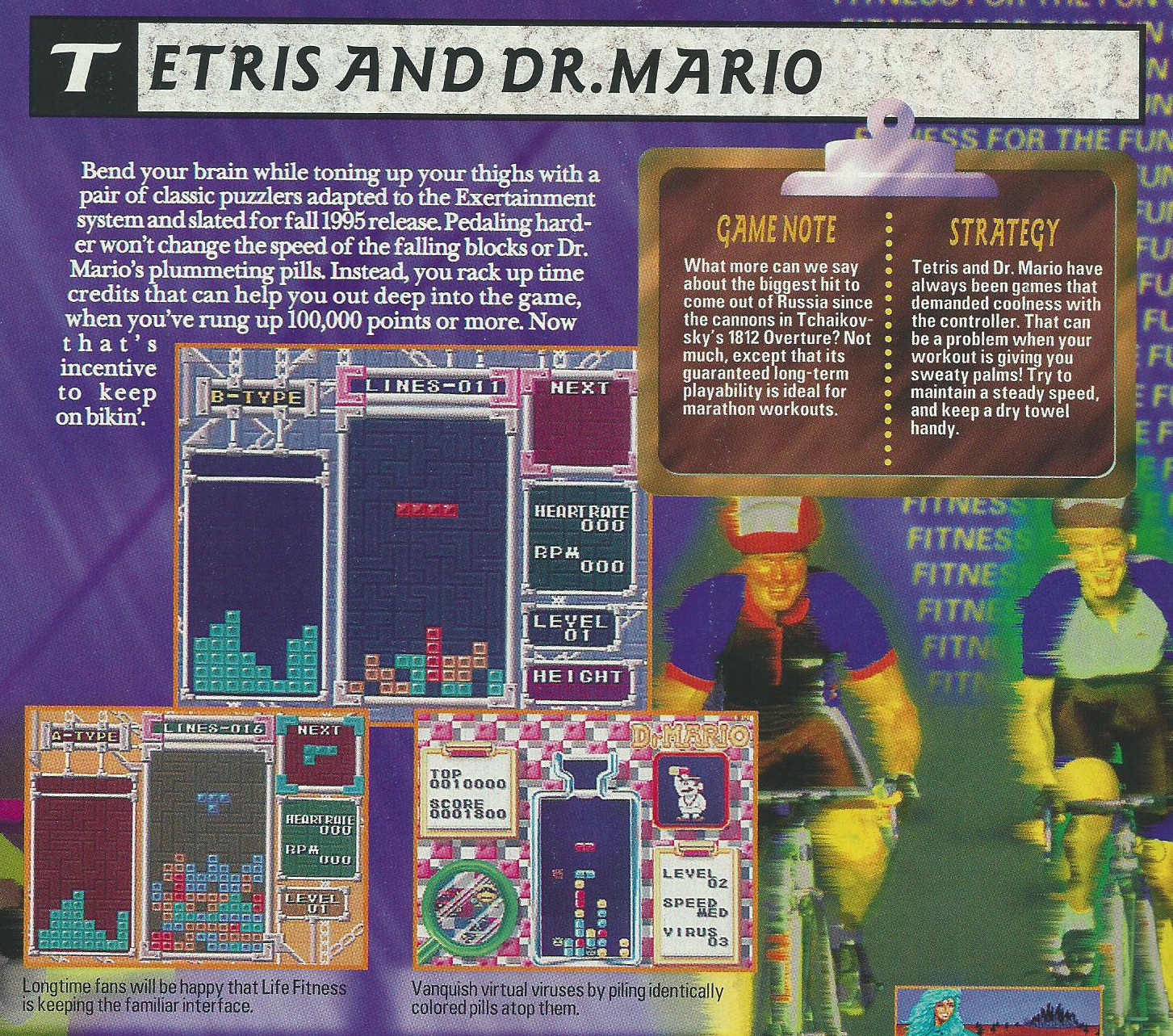 The second game mentioned was a Tetris/Dr. Mario port.

Next up is a fascinating piece of hardware I had no idea existed until recently. When I went on family trips as a kid, I sometimes saw Nintendo 64 controllers in hotel rooms, with the cords attached to the back of the TV. On the TV’s menu, you could rent N64 games for a brief period of time. 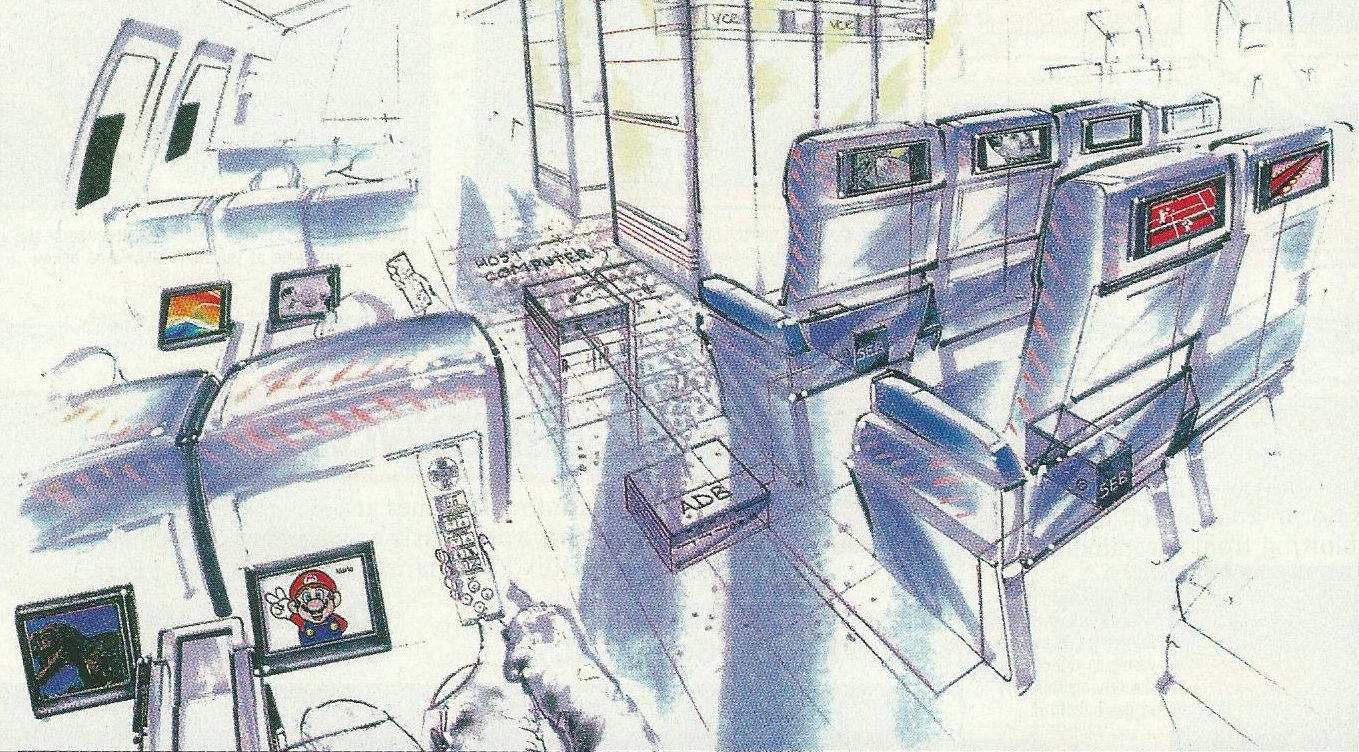 Now, imagine playing video games on an airplane and you have the Nintendo Gateway System. Available on certain airlines in the early 1990s, the Gateway system was incorporated into TV screens on the backs of seats, allowing console gaming in flight. Instead of cartridges, every game was stored on a host computer hidden beneath the center aisle. 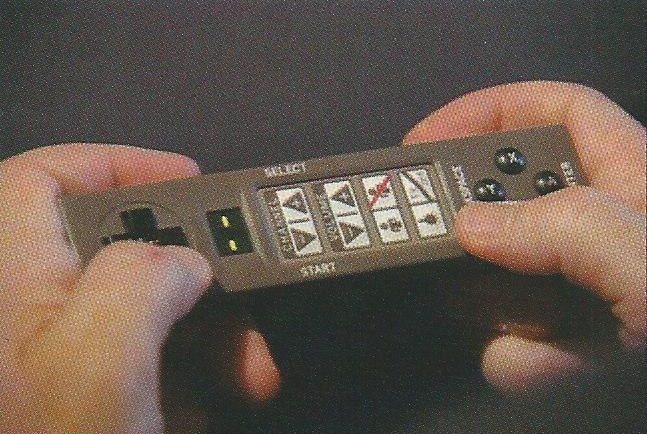 The remote used to make selections on the screen was also used as a game controller similar to that of the SNES. 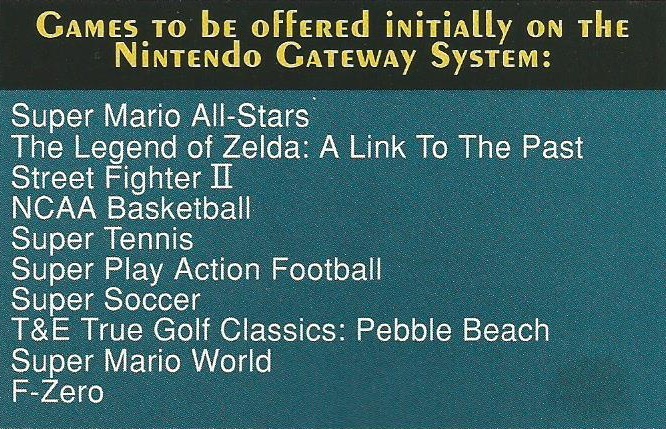 Ten games were initially offered for the service and I am not sure if any additional titles were added. 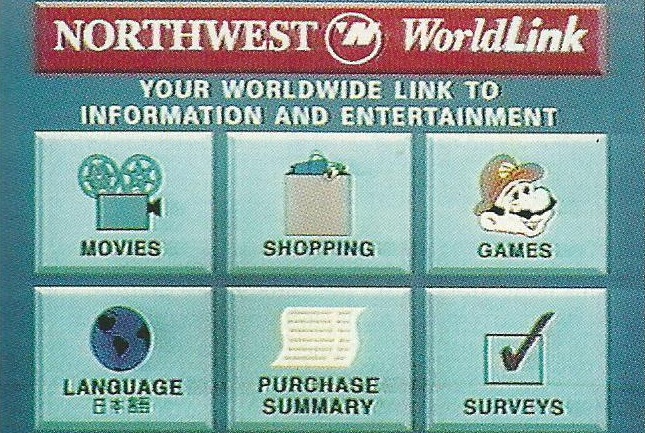 Additionally, you could rent movies and even browse through a shopping service. 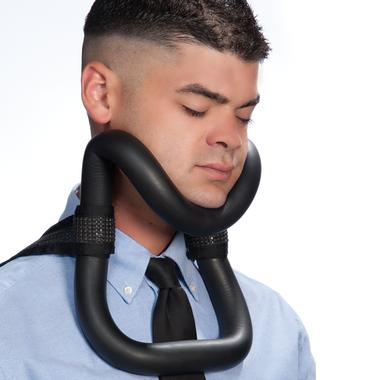 So, thankfully, you could order something wonderful from Skymall and speedrun A Link to the Past at the same time. 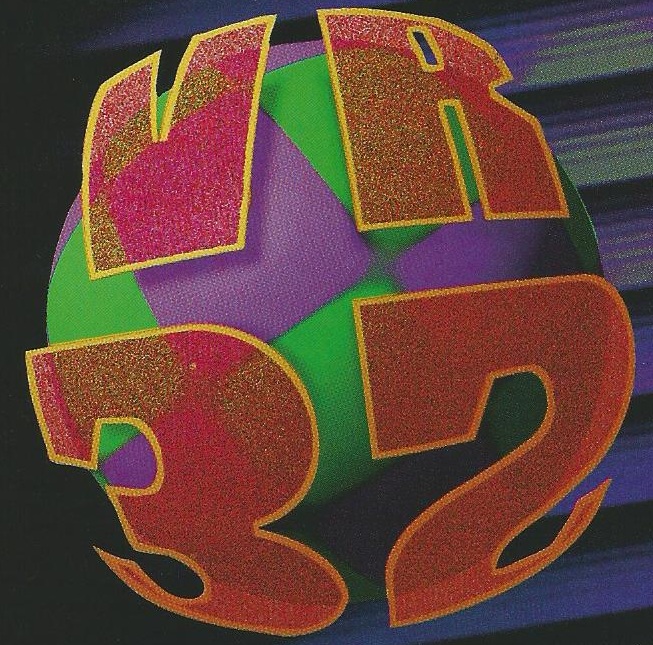 Next up is the prototype portable system known as the VR 32, which would come to be known as the Virtual Boy. The system was hyped as a cost-effective virtual reality experience featuring real, three dimensional depth. The article goes into depth describing how the technology would enhance gameplay in a variety of genres, such as sports titles, platformers, and shooters.

Of course, it is impossible to reproduce 3D visuals on a magazine page, but the article tries to explain the experience as enthusiastically as possible.

Meet that Wario in person? No thank you.

Reading the article reminds me of the hype surrounding the 3DS when it was first announced, of how it would revolutionize gaming. At the time, I thought a lot about how the 3D effects would enhance gaming and make it more immersive. Now, I have never played a Virtual Boy, but I’m well aware of its headache-inducing reputation, something the article fails to mention.

Or that it sends you to Rome to fight against faceless business persons.

Next, I’d like to talk about the progression of my favorite gaming system of all time, the Nintendo 64. The system was given the tentative name of Project Reality, signifying that the games to come would be ultra realistic and the clear choice for the next console generation. In ‘Pak Watch’, the section at the end of Nintendo Power issues dedicated to revealing and speculating on upcoming releases, Project Reality was elaborated upon. 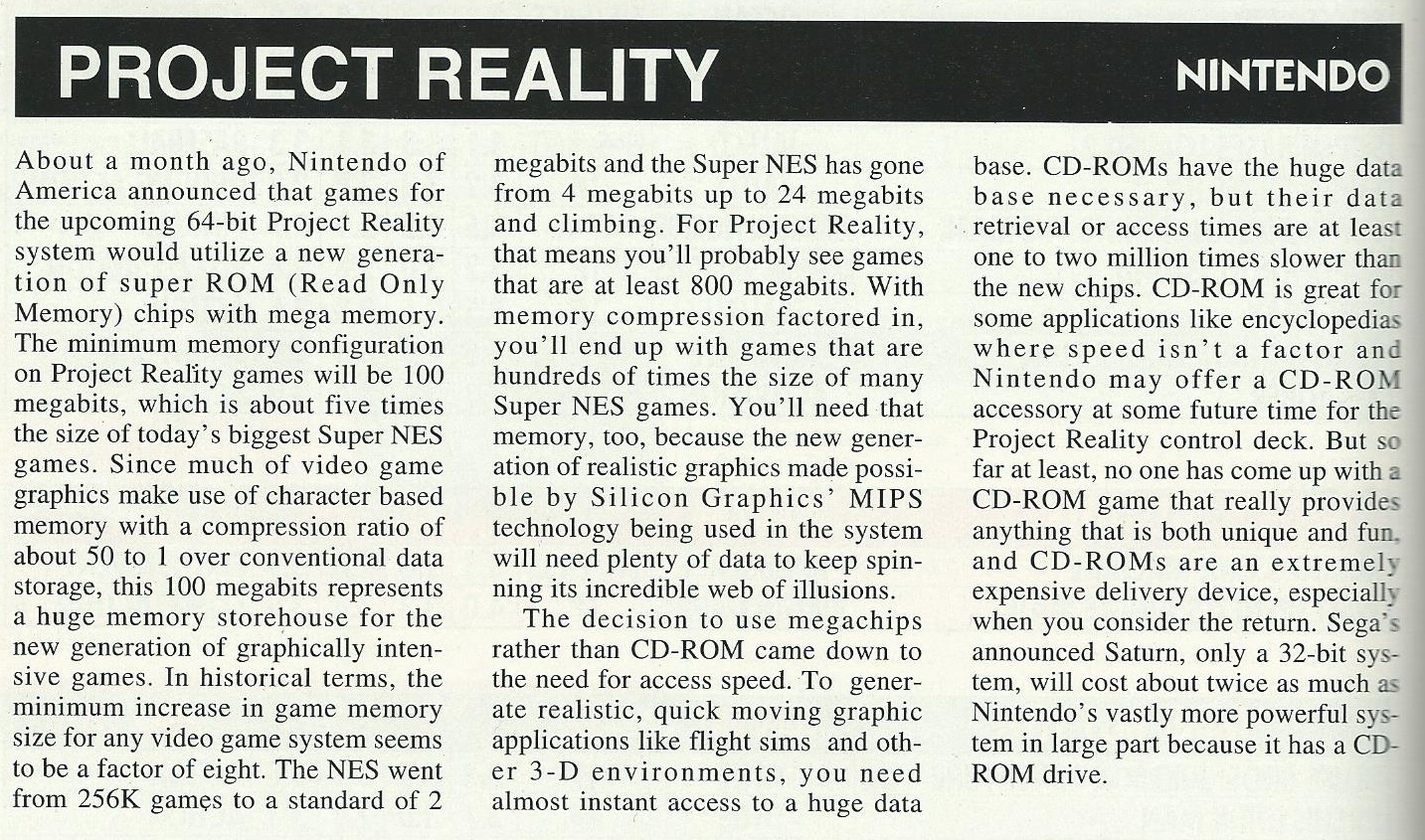 It was announced that the system’s games would appear on cartridges instead of CD-ROMs, a clear break from the trends at the time. It also seemed like a 180-turn from the position in the SNES-CD article a few years prior. Now, CD-ROMs were considered slow, expensive, and boring, with the most prominent titles being encyclopedias. As quoted in the article, “So far at least, no one has come up with a CD-ROM game that really provides anything that is both unique and fun.” 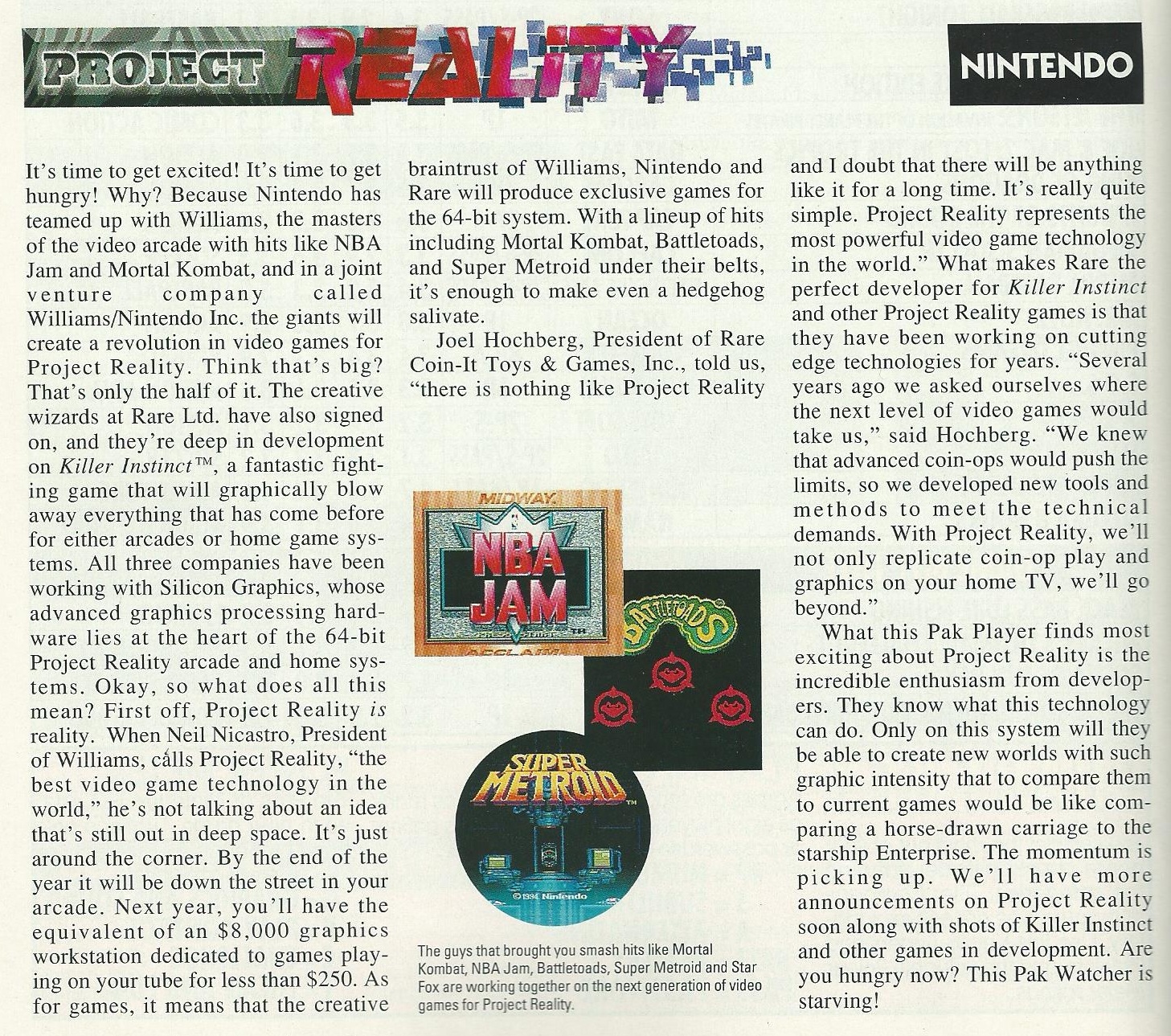 A later ‘Pak Watch’ discussed partnerships between publishers and cried the virtues of the Silicon Graphics technology used to create Project Reality. The technical details behind the project weren’t quite laid out, but it was claimed that it would be the most advanced gaming system at the time. 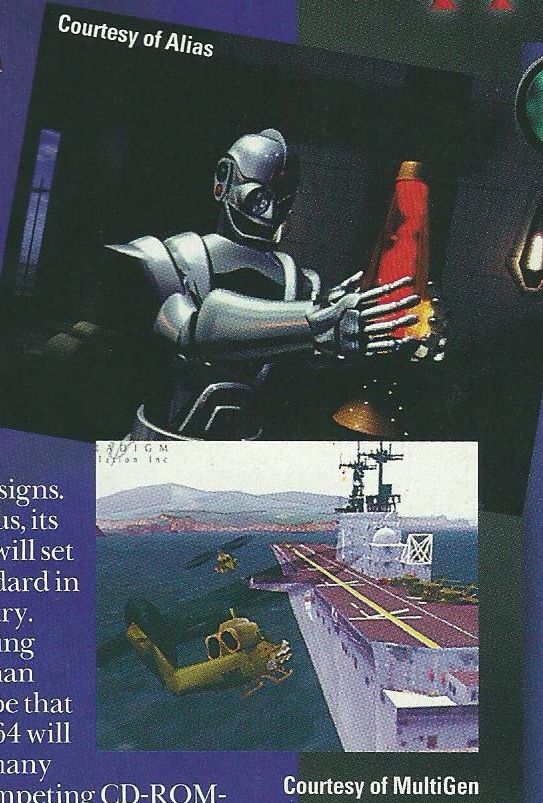 A later issue went into detail on the technical aspects of the NU 64, the next name for the system, describing the processors and ROM chips used to create the system and giving particular praise to the system’s speed. 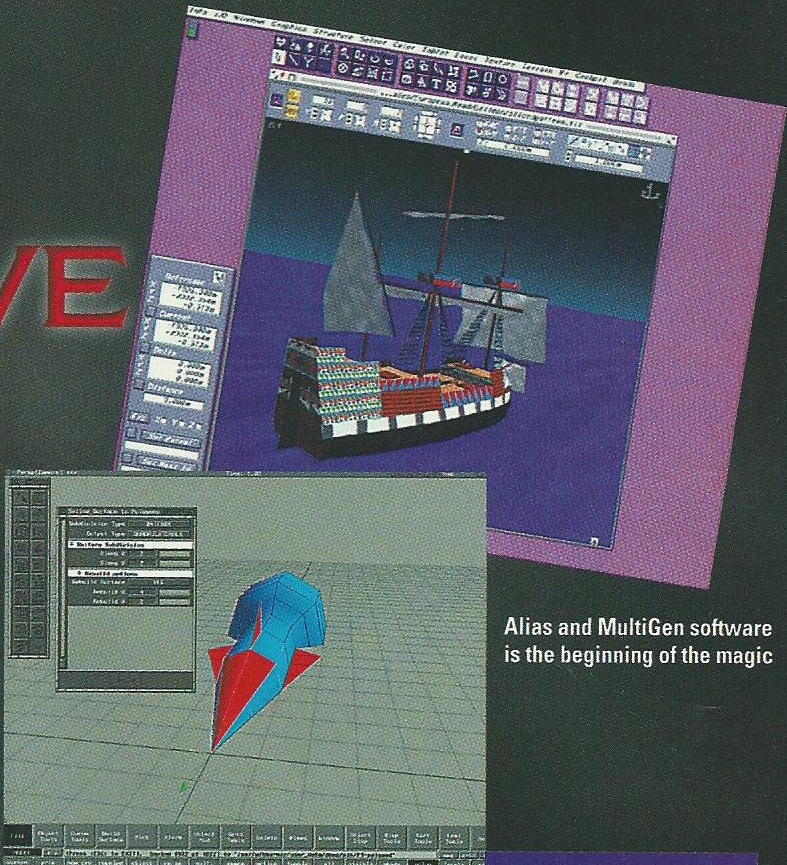 Test visuals from different developers were also showcased, showing what games on the system might look like. Software used to make games was also shown. 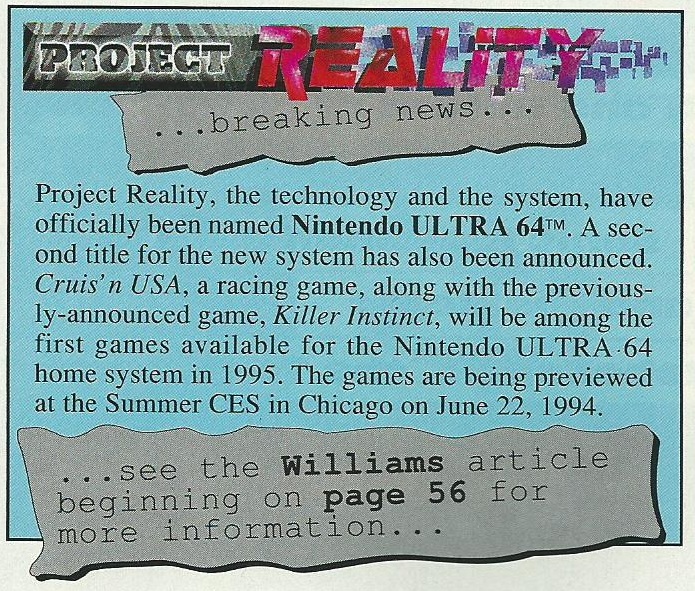 Next, Project Reality was given the name of Ultra 64, featuring games such as Cruis’n USA and Killer Instinct. The system would boast arcade-quality games in the comfort of your home. 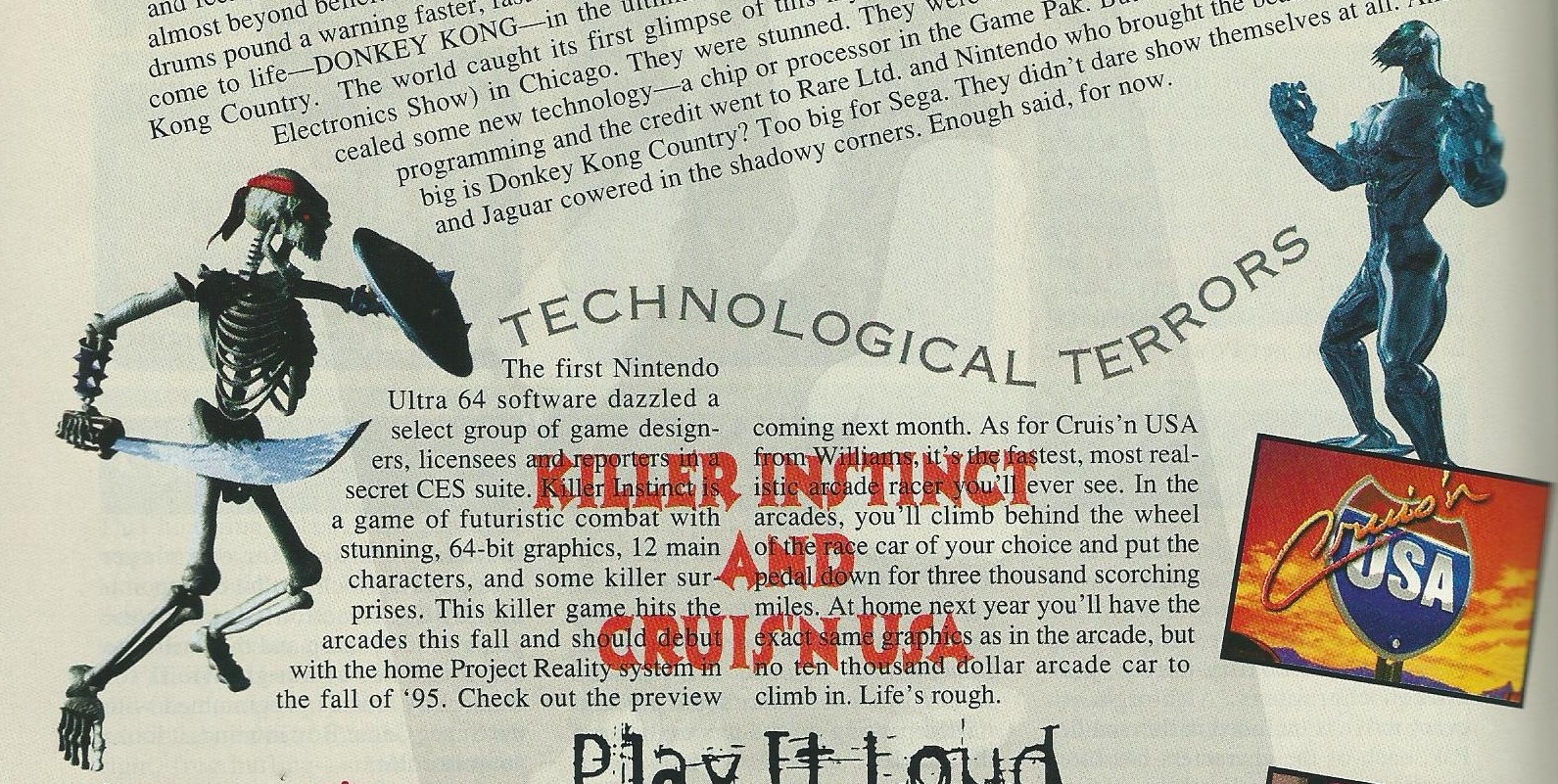 Both games were heavily featured in upcoming issues, both with multi-page previews. It was claimed that the Ultra 64 would launch in the fall of 1995, with both games accompanying the release. 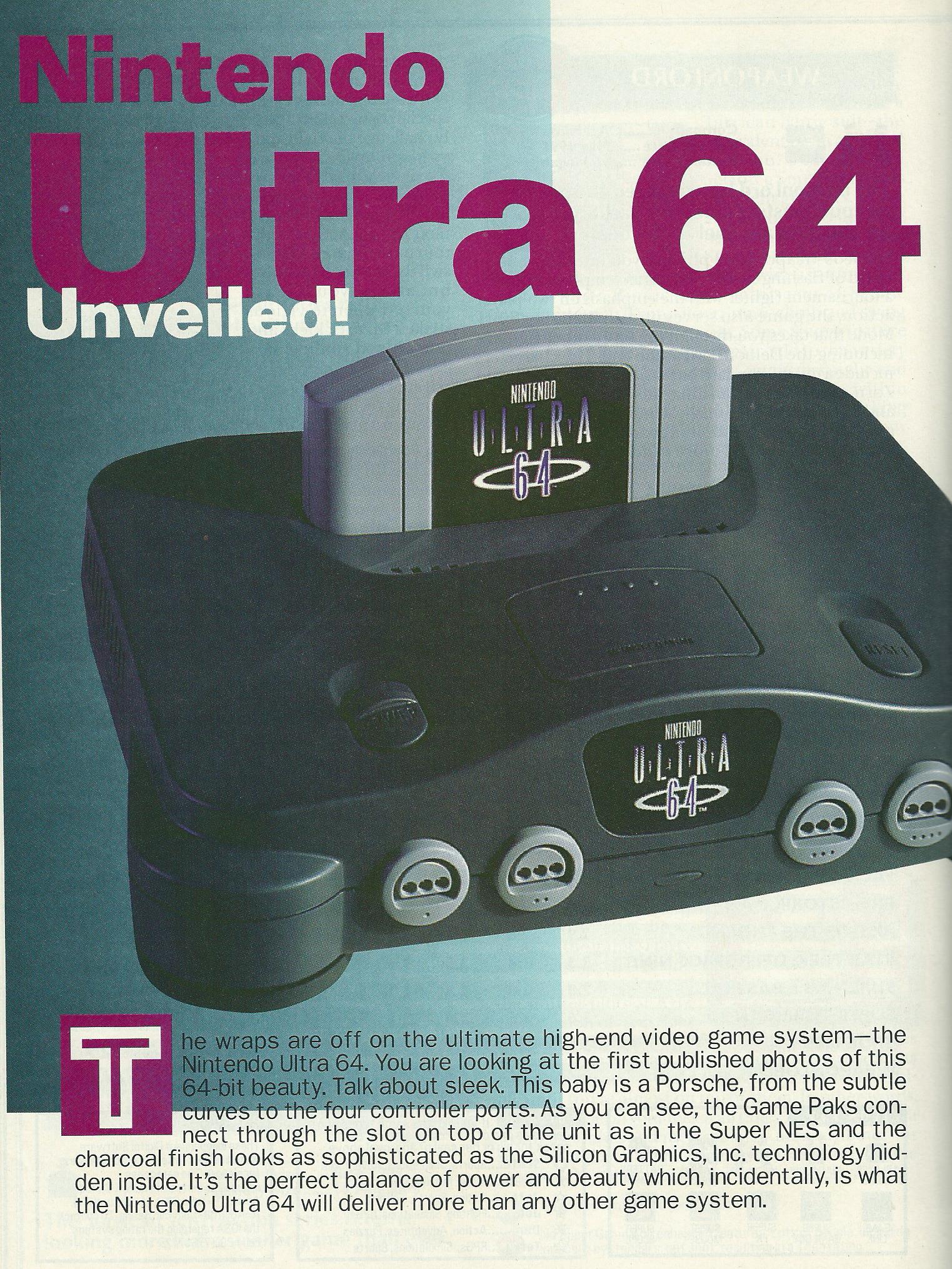 The system itself was revealed several issues later, still retaining the Ultra 64 name. To me, it’s strange seeing the familiar game system with a different title. Though only the title is different, it almost looks like a totally different machine.

I love the hype in the article, that the system would be “the most awesome, mind-blowing video game hardware on the planet.”

I hope you enjoyed this look back at hardware and accessories from the pages of Nintendo Power and maybe learned something new. I’ve had a lot of fun reading through these old issues and putting this series together. I don’t have another installment planned, but if I find any other back issues, I will definitely try to share what I’ve found!