World Building: Final Fantasy XV's party IS unique, and so is Eos

There's been a lot of heat surrounding Final Fantasy XV lately. Don't believe me? Take a quick sec and hop on over to Dtoid's   various   FFXV-related   comment   sections--go on, I'll wait. What did you see? Positivity, of course, but also a large helping of negativity. The top two comments are usually polar opposites of one another, to a T. Really, it's extreme either way--some says it's already their GOTY, while others are already carving a spot for it on their biggest gaming disappointments. While I'm not hear to defend a company that often makes terrible decisions, nor am I hear to convince you that Final Fantasy XV is going to be the best RPG of the year, but I will talk your ear off (read your eyes off?) about just how great the world building already is thanks to the (over)abundance of multimedia projects the game has already spawned.

And it's all thanks to Prompto and this weirdly good short anime series.

I decided to finally sit down and watch the half-length episodes without much thought. I'm free, I thought, I won't be doing much else than playing video games today and checking back on Dtoid so often I think I might actually have developed a problem, so I might as well take Square up on their offer of what has reportedly been quality anime. So far, I haven't been disappointed--between the consistently good animation, well written characters, and as-always solid Japanese voice acting, it has a lot going for it. I pray the main game carries the same levity and sweet bro-fists.

By the end of episode two, the one that deals with Prompto's past and his meeting Noctis, I was hooked. This isn't a review of the anime, mind. You can watch it yourself, it’ll take only 40 minutes or so. This is simply a take away and retrospective on what I feel has been the best characterization of any RPG game yet--and the fucking game isn't even out yet.

You see, Prompto was fat. No, that's not a characteristic in and of itself, but Prompto's childhood consisted of eating fast food everyday due to living alone, obsessions with a camera, and not a whole lot of self esteem. The episode lays it out pretty plainly: Prompto is carelessly driving the Bro Car on a road surrounded by a densely wooded area while Ignis is scolding him to "turn down that blasted youngin' hippidy-hop". Without warning he slams the breaks, rushes to the aid of a precariously placed puppy (a wild one, at that--the mom is a fucking gigantic Mononoke monster) with a thorn in its side and we get a kind-of-too-perfect flashback to a similar scenario involving another pup with a hurt leg and yadda yadda. 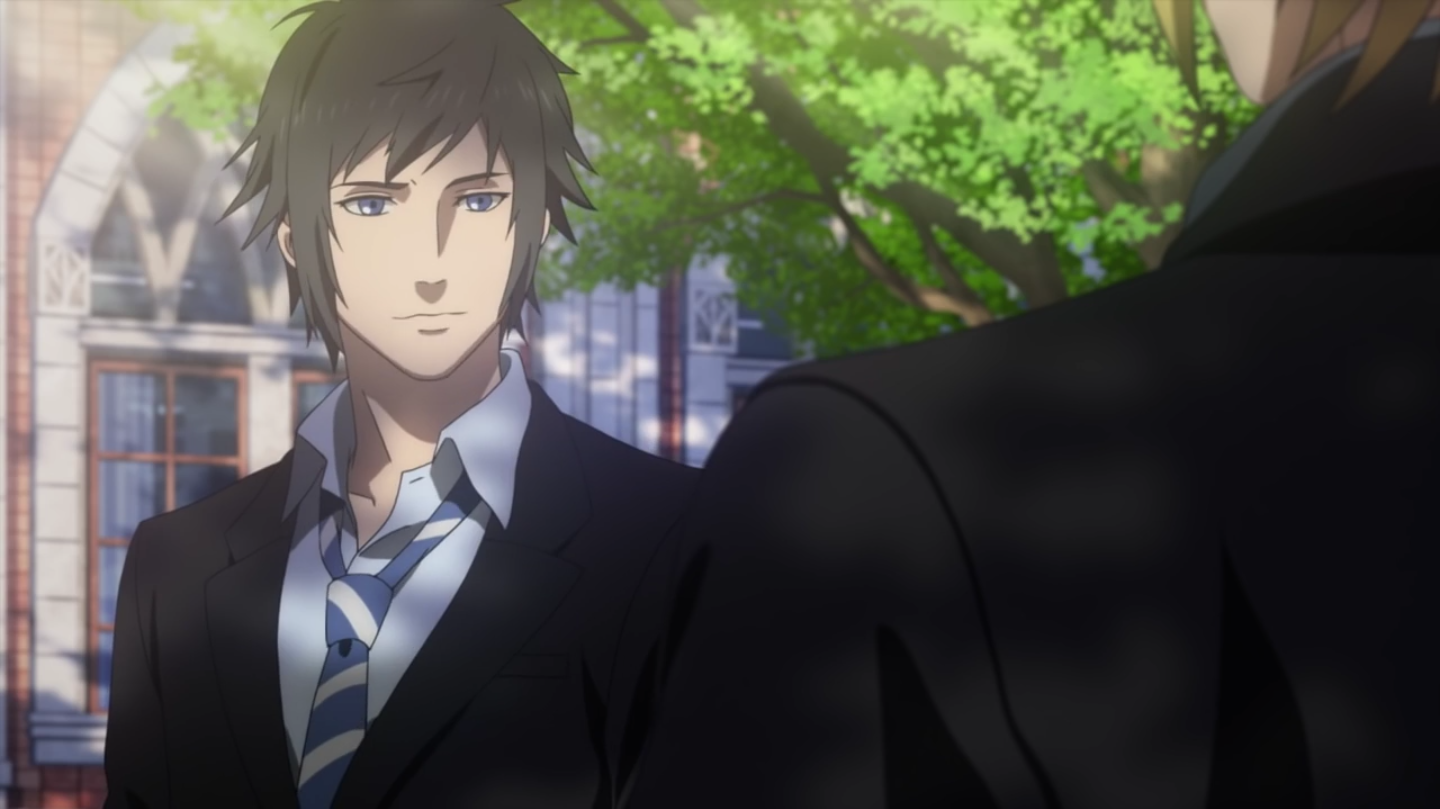 I'm also going to break here and just say that THIS EPISODE IS SET IN JAPAN. Like there's literally a road with "stop" written in Hiragana and they attend a literal modern Japanese anime high school and what the fuck?? I'm all for this weird juxtaposition of cell phones and behemoths, video game arcades and whatever the hell a mesmerize is, but come on. You can't have JRPG Fantasy Town With A Fruit Stand and fucking suburban Japanese anime neighborhood 23-19. What, are gonna take a subquest to the Bronx maybe? Pick up some fucking maple syrup from Toronto? Catch strep throat because the guy behind me at the airport won't stop coughing and I sit in the cheap seats?

Moving on, Prompto is a fat, photography loving antisocial kid and I adore him. It took me a solid two minutes to realize it was Prompto at all. Throughout the eleven minutes we see how he pseudo-met Luna and entered Noctis's life as his best friend, see him struggle with his weight and eating more greens, and come to understand just a little bit more on why he'll be taking a lot of pictures, I assume, during our time in Final Fantasy XV.

It’s this picture (above) that really convinced me that, yeah, this party is made up of real people. Square could have taken so many paths here--the rival turned friend, the childhood friend, the guy Noct and co. meet during their travels, the guy who "gets wrapped up in this" and tags along--but instead they chose a more relatable, actually living character with a sad story and a not-so-great childhood. We see him grow into being a more social, probably-way-too-sexy-but-still-not-girl-savvy guy. That goes a lot deeper than artificial cuteness or "haha this clumsy character" I anticipated him to be.

That goes for all the characters in the (current) FFXV party roster. Gladiolus actually detested Noct at first, and learned to understand why young Noct acts the way he does. Ignis is still mysterious, but he’s Noct’s caretaker with an obsession of baking the perfect puff pastry. Noct is still a bit of a punk, but his life as a (poorly) hidden prince and the stress that comes with knowing his father will die very soon makes him all the more compelling. This party is full of dudes whose tiny, inconsequential personality quirks propel them above many if not all JRPG tropes and turn them into characters. There’s no rainbow haired amnesiacs, or big-breasted dedicated priestess healers—there’s just Noct, Gladios, Prompto, and Ignis. They’re friends, caretakers, brothers, held jobs, sleep on long trips, have to push cars when they break down. 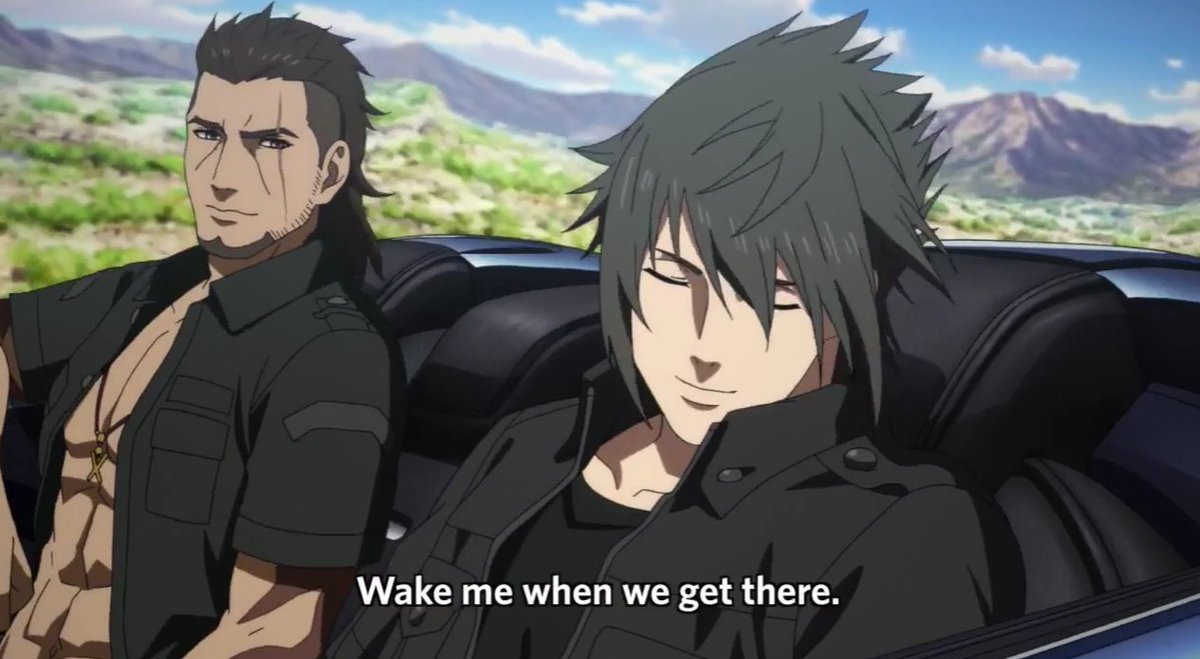 In a realm of RPG, anime, and movie tropes, you can’t get much more unique than four dudes road tripping. I can’t wait to delve into Eos and count how many bro-fists Noct and co. pound.

Yo! Hoosier born and bred, but you won't catch me shootin' hoops or going to the Krogers. I've been playing games since I can remember, will play them until I die, and let's just try to not to be dicks in the comments, yeah?