What's Inside Inside? Are We Asking the Right Questions about Inside? 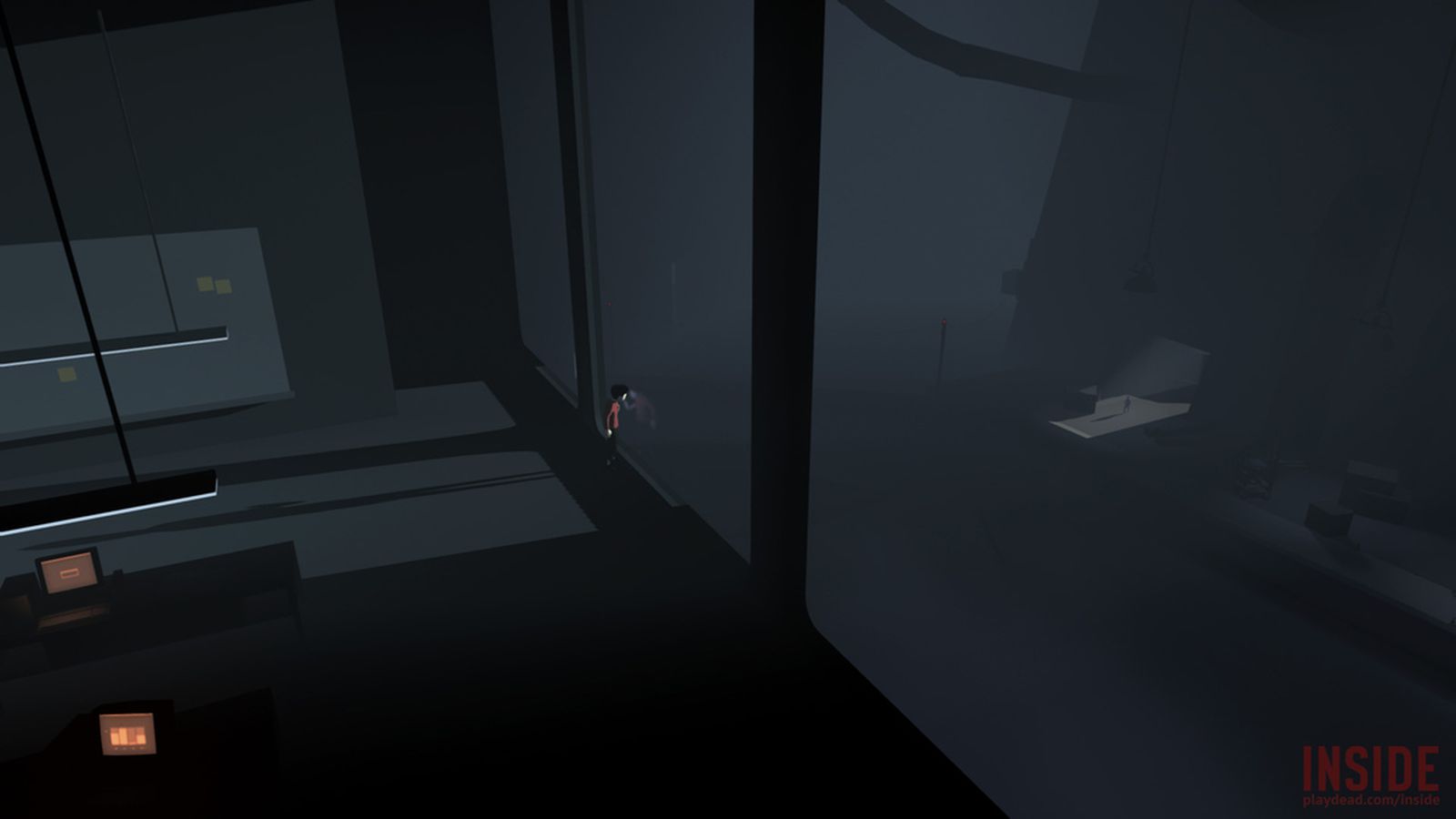 By now most of you have either played or heard enough about Inside for you to formulate a firm opinion. If you haven't seen or played the game all the way through, I'd highly advise either playing or (as a second option) watching a let's play without commentary. And now you probably have a lot of questions. But are you asking the right questions? In my observation, few people are and few people did with Playdead's previous game, Limbo.

I believe that, in order for you to get set on the right course when thinking about this game, you first have to know what you're even seeing. Since the game provides hardly any explanation and never once directly informs the player with dialogue or text of anything at all, it leaves you wanting to put forward explanations of your own to fill in all the gaps. A lot of these explanations seem to be taking the wrong route, however, by looking very literally at all of the events of the game and trying to string a narrative from ordinary cause-and-effect. For various reasons I think this is the wrong approach and isn't likely to lead to any satisfying conclusions. The game isn't sci-fi, with logical explanations for all of its phenomena. It seems to be that odd cousin of fantasy: symbolism. Like a fantasy world, the symbolic world plays by rules that intentionally lack a solid explanation. But whereas fantasy plays by its own set of fictitious rules, symbolism respects neither consistency of rules nor a need for justification.

It sounds like a license to just write gibberish, but it isn't. Symbolism asks the viewer (or player, in this case) to key in on the moment-to-moment visuals, take the importance of the themes and string those together. Inside's world is not constrained by logic, it's layout and geography make absolutely no sense. The player begins outdoors in a wooded area, descends through buildings into an ocean, more buildings, more ocean, then finishes by popping out the side of a tall mountain. That should be the first big clue that the events of this game are not meant to be taken literally. The boy we control in Inside is not so much a character with an objective as he is a vehicle for showing us the presented themes. He can still have a goal, but it's not something as tangible as some things I've heard suggested.

I can't fault anyone for coming to that conclusion, however, since the game gives no hint at what it's trying to do until much later. The biggest indication is probably the ending sequence that seems to offer absolutely no resolution. But along the way, as I mentioned, it should be clear to anyone that's receptive to this kind of abstract storytelling, that the game is far from a literal exercise that would offer players any kind of concrete certainty on who anyone is in the game or what any of their motivations are.

So it begs the question, what's Inside supposed to be about, if not the plight of this boy escaping captors or trying to free some science experiment or being himself controlled by an outside force (as seen in the alternate ending)? Well, that's a tough question, and one I don't have a completed answer to, I'm afraid. There are a lot of themes being strung together here, but I've yet to come up with a cohesive message. I assume in all of this, of course, that this game isn't just a pretentious nonsense pile. As of this writing, I have no conclusive proof that it isn't a pretentious nonsense pile, but I'm willing to give it more than just my own time and attention to make that claim. 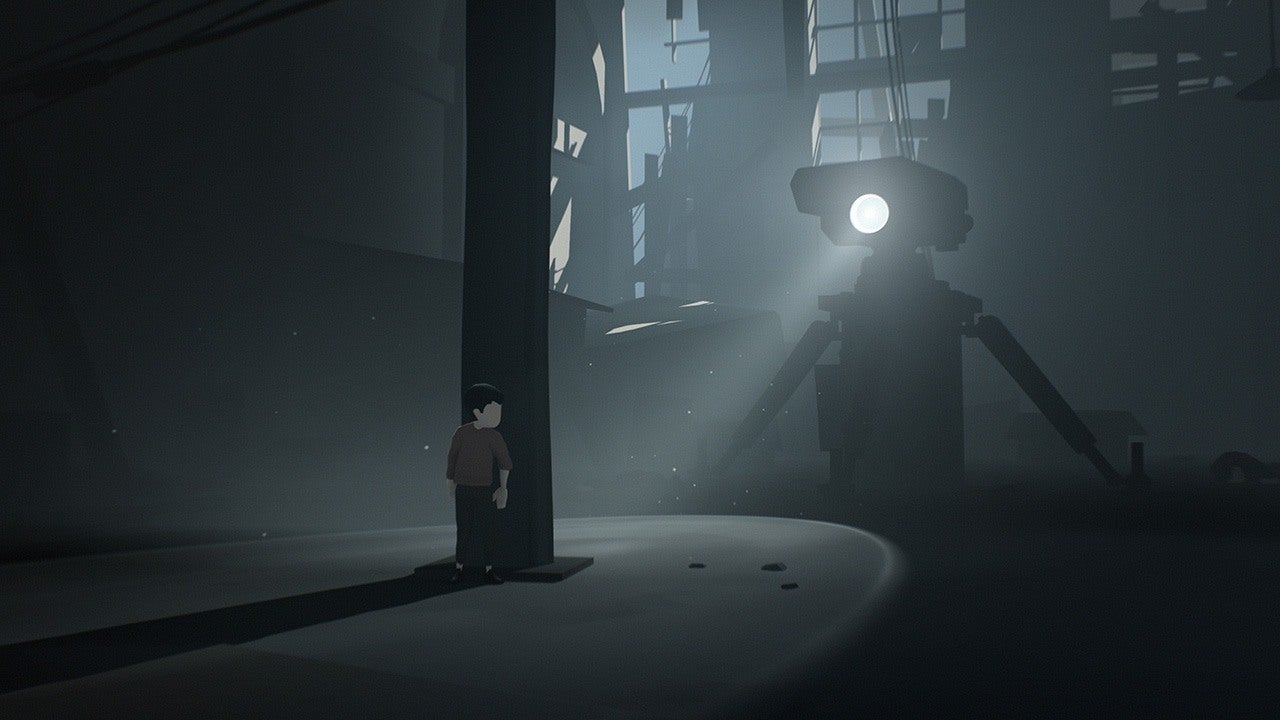 Among the themes I can pick out from Inside are the following:

Group Mentality and Leadership. We witness several examples of animals or people following you or others around as a group. The chicks in the intro, the captured workers, the fish after you've been drowned, and the science experiment people are all examples of this.

Mind Control and Integration. An obvious one is the mental control of others remotely by overt technological means, but, as mentioned previously, also by willful following. Are the animals under your control? They don't seem to be. The assembly and union themes come to a head in the final scenes when the boy is physically melded with a blob of other human test subjects that begin exercising a singular will.

Facelessness. The captors in the opening of the game are all wearing expressionless masks and the boy we control also lacks a detailed face. With the boy it strikes me as more than just a style choice since other characters of similar size on screen have decernible facial features. And when faces can be made out, they're often quite blank.

Scientific Corruption. Much of the game's scenes are dominated by lab settings with wires and testing chambers all over the place. The mind control parasite worms seen in the opening in the pigs and near the end erupting out of some of the human test subjects are made only more disturbing by the imagery of scientists casually monitoring these subjects, with some accompanied by small children watching curiously by their side.

Rebirth. Things seem to be given new life by the mind control effects present in the game. Nothing is ever unwillingly possessed, instead we see only idle subjects being controlled that would not act on their own. The pigs seem emaciated and nearly dead in the opening and the humans are all limp, perhaps deceased, when not being controlled. Toward the end the boy is drowned by one of the underwater girls (another apparent test subject seen plugged into machinery) and is seemingly reborn with the ability to breathe underwater and control the minds of some test subjects without use of a helmet previously needed for the task.

Escape. While the major theme of the game is union, assembly, and control, the protagonist's trajectory and the closest thing to a desire we have for him is to escape contact with others. Through the events of the game, his success in this regard actually traces a rather traditional story arc of rising action up the the climax of being subsumed by the blob to the "resolution" of breaking out of the facility. In this regard the protagonist seems at odds with the title of the game itself.

So, this was as much my attempt to explain the game to you as it was an exercise for myself to further understand the themes and structure of the game. As I mentioned, I still can't be completely sure this game truly has the deeper meaning I'm pursuing. It may just be obscure writing with no substance, it's at least possible for that to be true. But I doubt a team of people would let something that farcical be worked on for so long. At any rate, those have been my findings. I don't think it's meant to be a literal story with explanations for every occurrence. What's that giant sound wave room? How does the water float on the ceiling? Who's the scientist guy you crush as the blob? Well, if the game is meant to be as symbolic as I think it is, then I don't think those answers even exist.