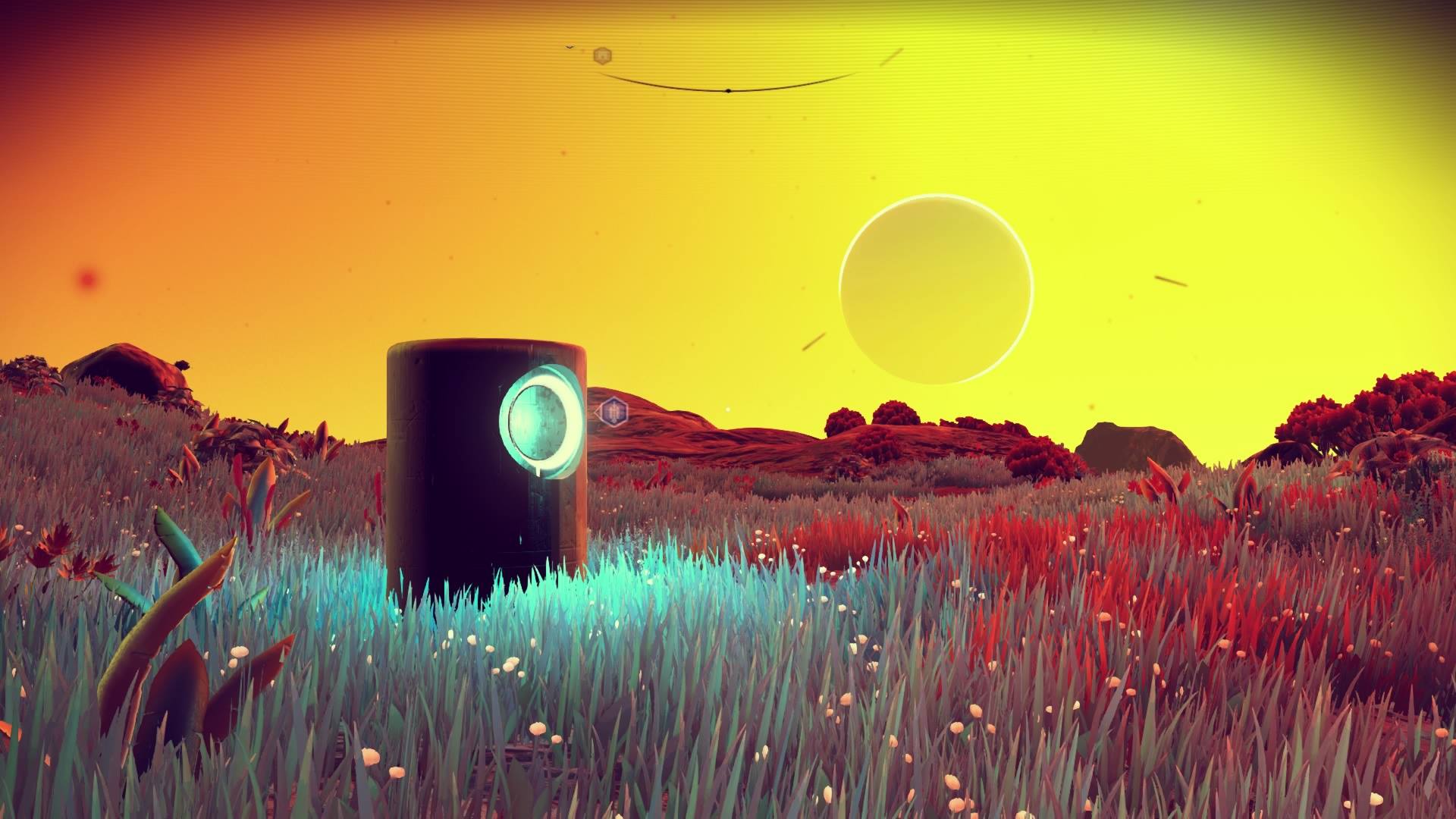 I've seen dogs that move like cats. I've seen trees that look like cotton candy. I've seen plants resembling the Marker from Dead Space. I've seen bears with fungus on their butts. Basically, I've been to a little bit of here or there, having looked at lots of things and felt very small (not just down there, but generally).

This is No Man's Sky in a nutshell. You see things. Yes, you can fight sentinels and mine resources, but they're merely there to offer a short break from seeing all the things. Sometimes, things can be very pretty! Sometimes, scary. Sometimes awe-inspiring. Although, occasionally, they can feel "uniquely", um... producedurally-generated. Vegetation being cut off and hanging from nothing, floating geometry, and demon goat raptors with green spots, no arms, and elephant feet. *shudder*

But, for now, let's make the game shine! 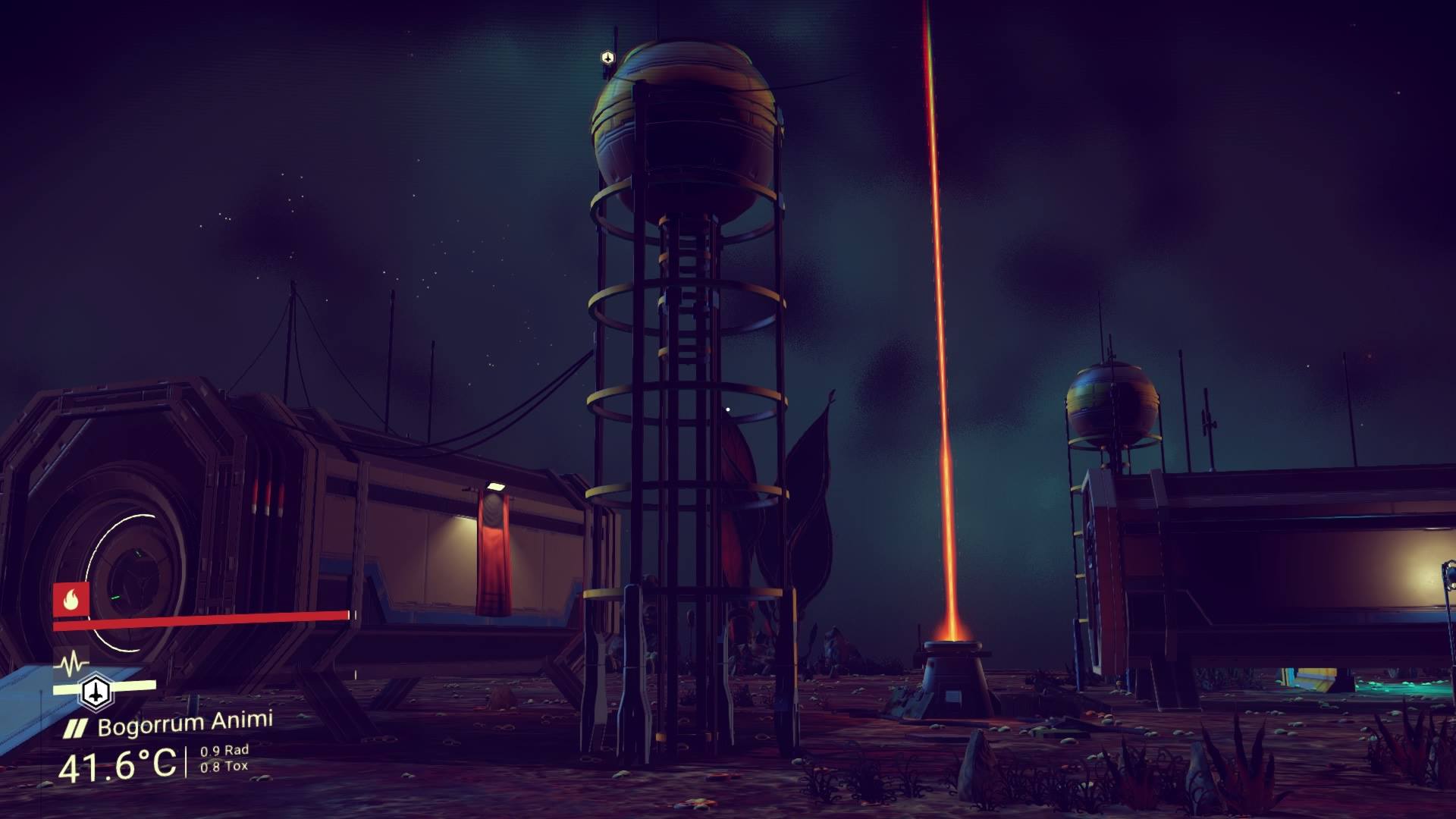 My very first outpost! I'm not sure if there's dynamic weather, but those were some pretty stormy-looking skies for a bit! 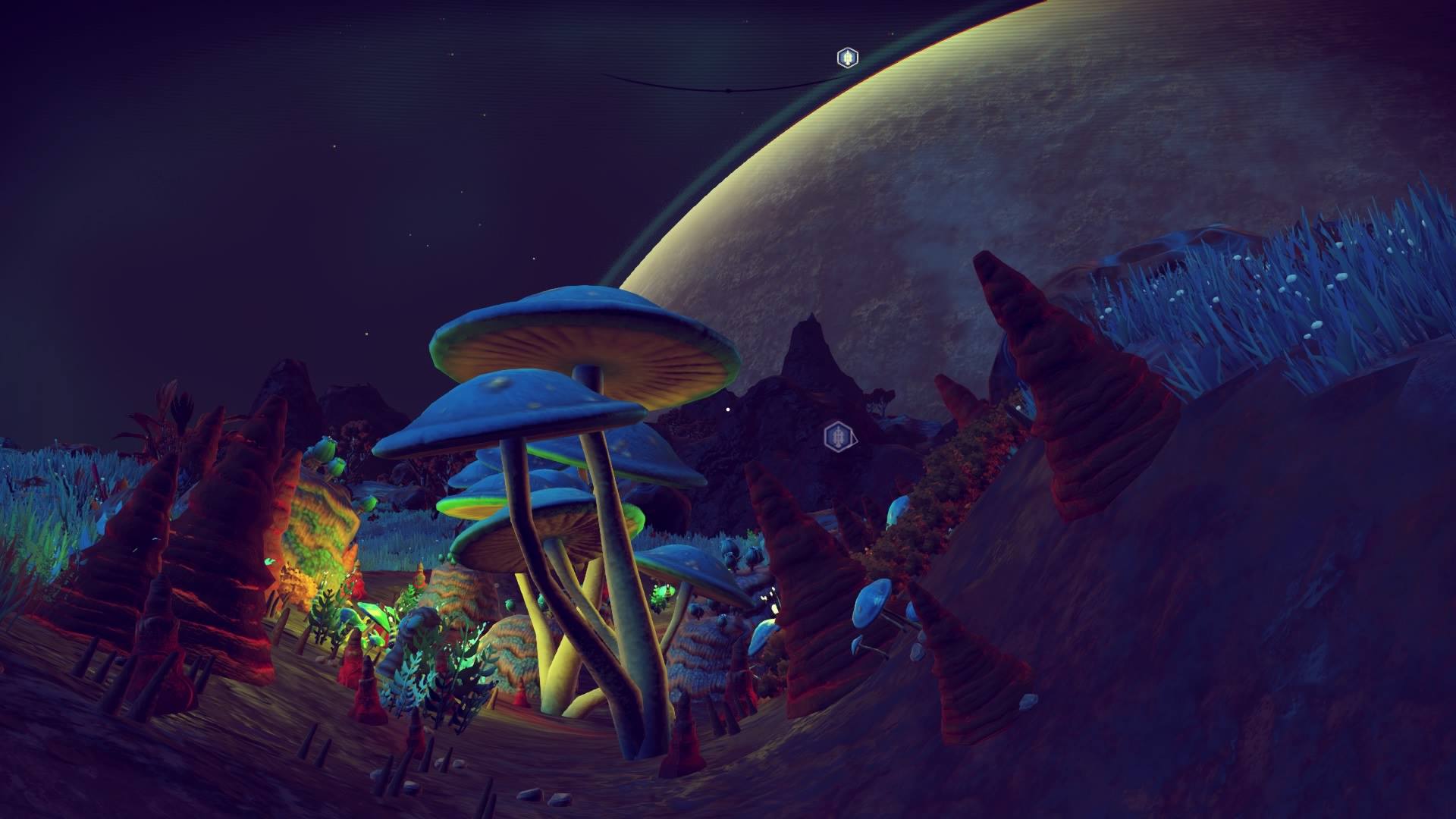 Looks like nature vomited into this crevice, in a beautiful way. 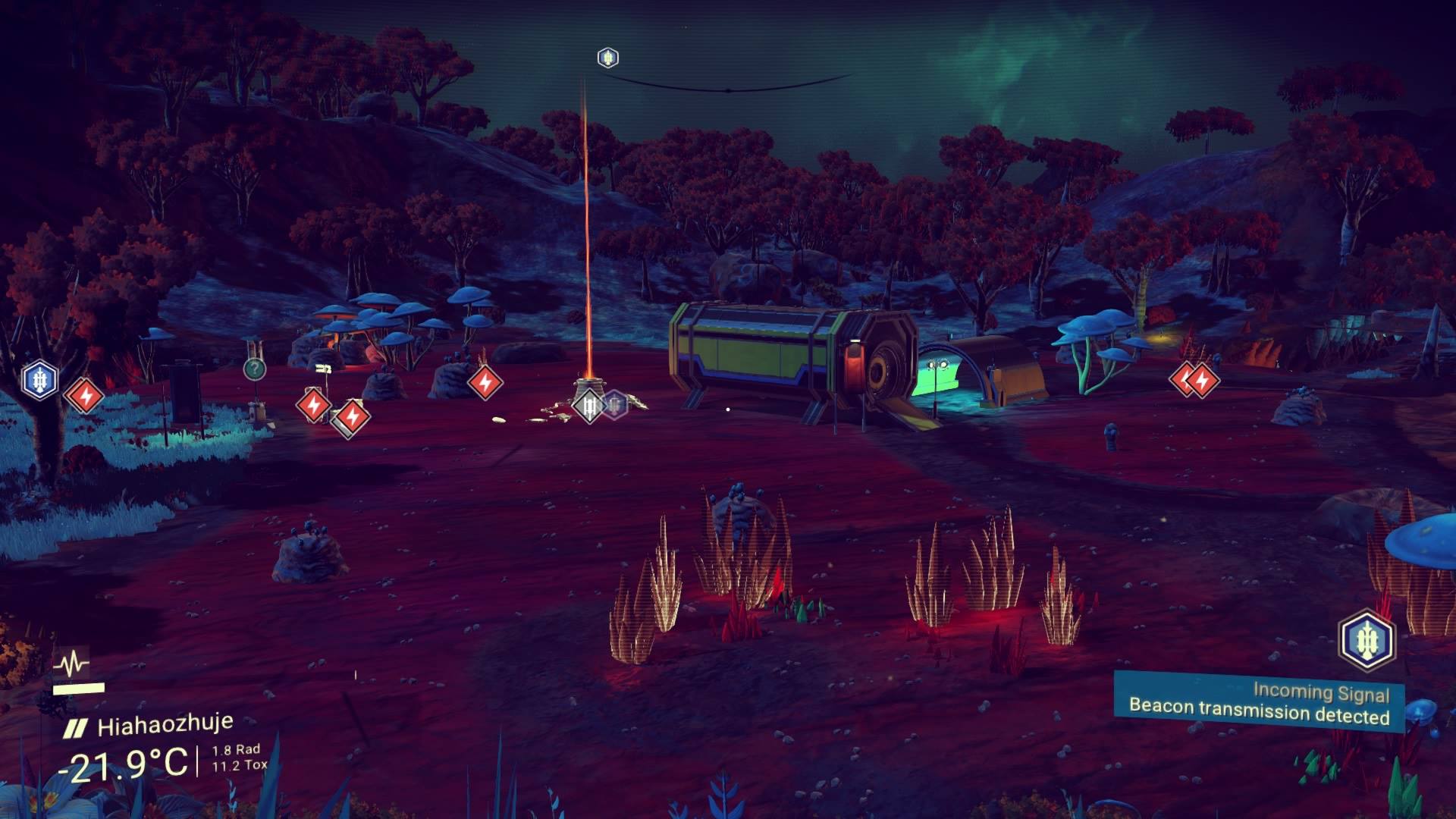 The second outpost I found was RICH with Plutonium! It's pretty cool how outposts are often, sensibly, stationed near caves or a lot of resources. 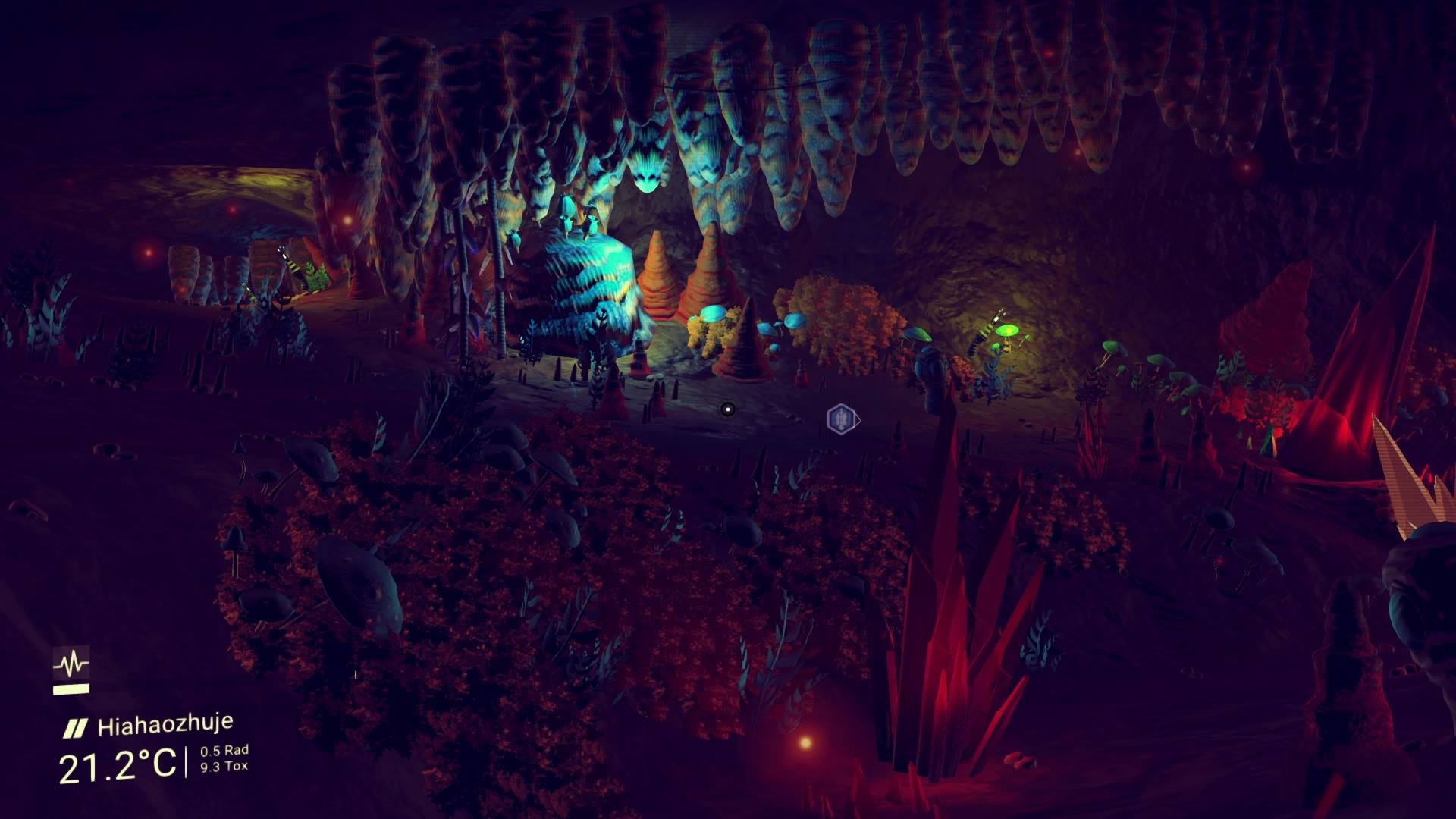 Speaking of which, here's my first cave! I probably spent a solid 15-20 minutes in just this one. It was that big. Even got lost one or two times. 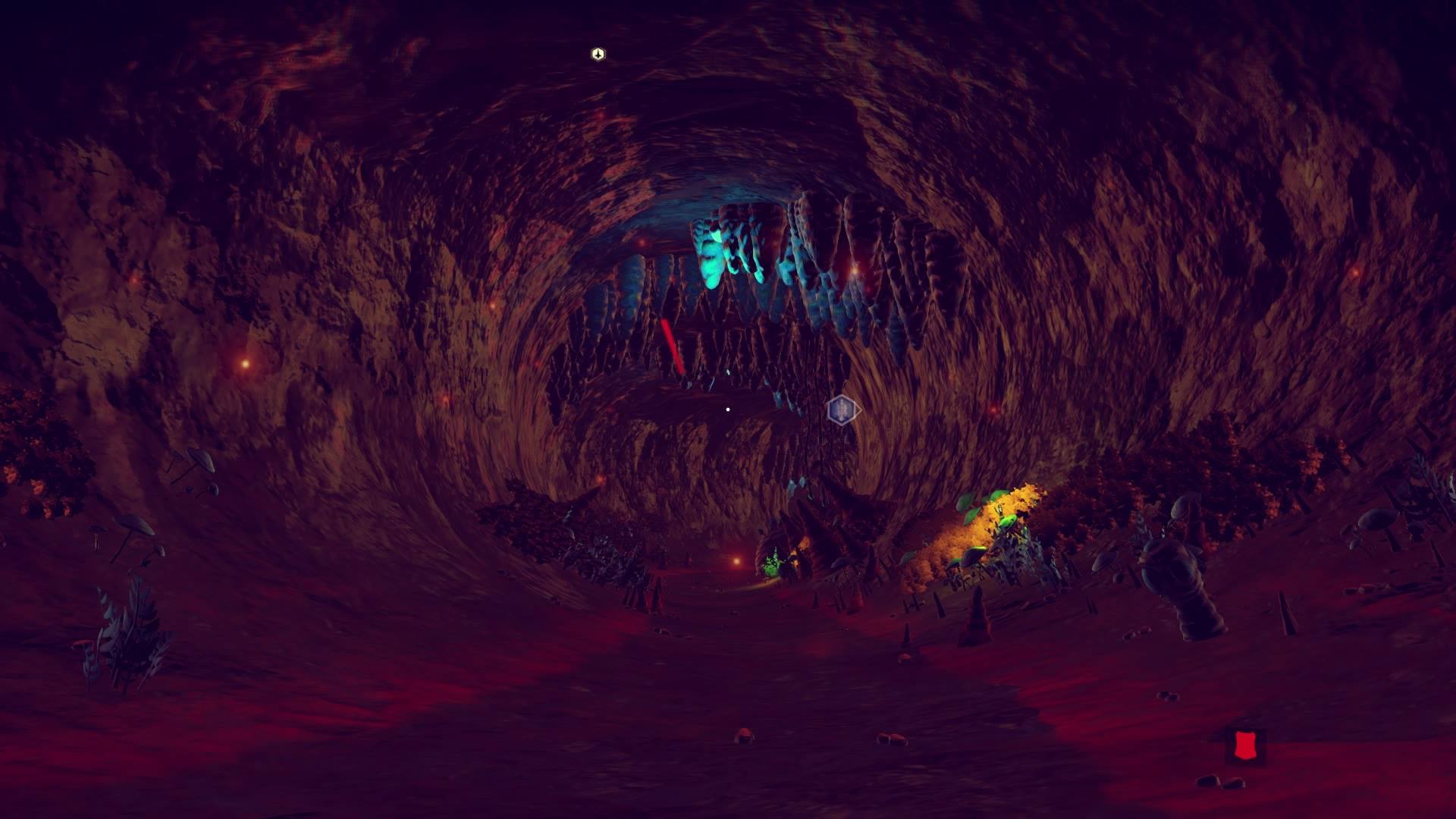 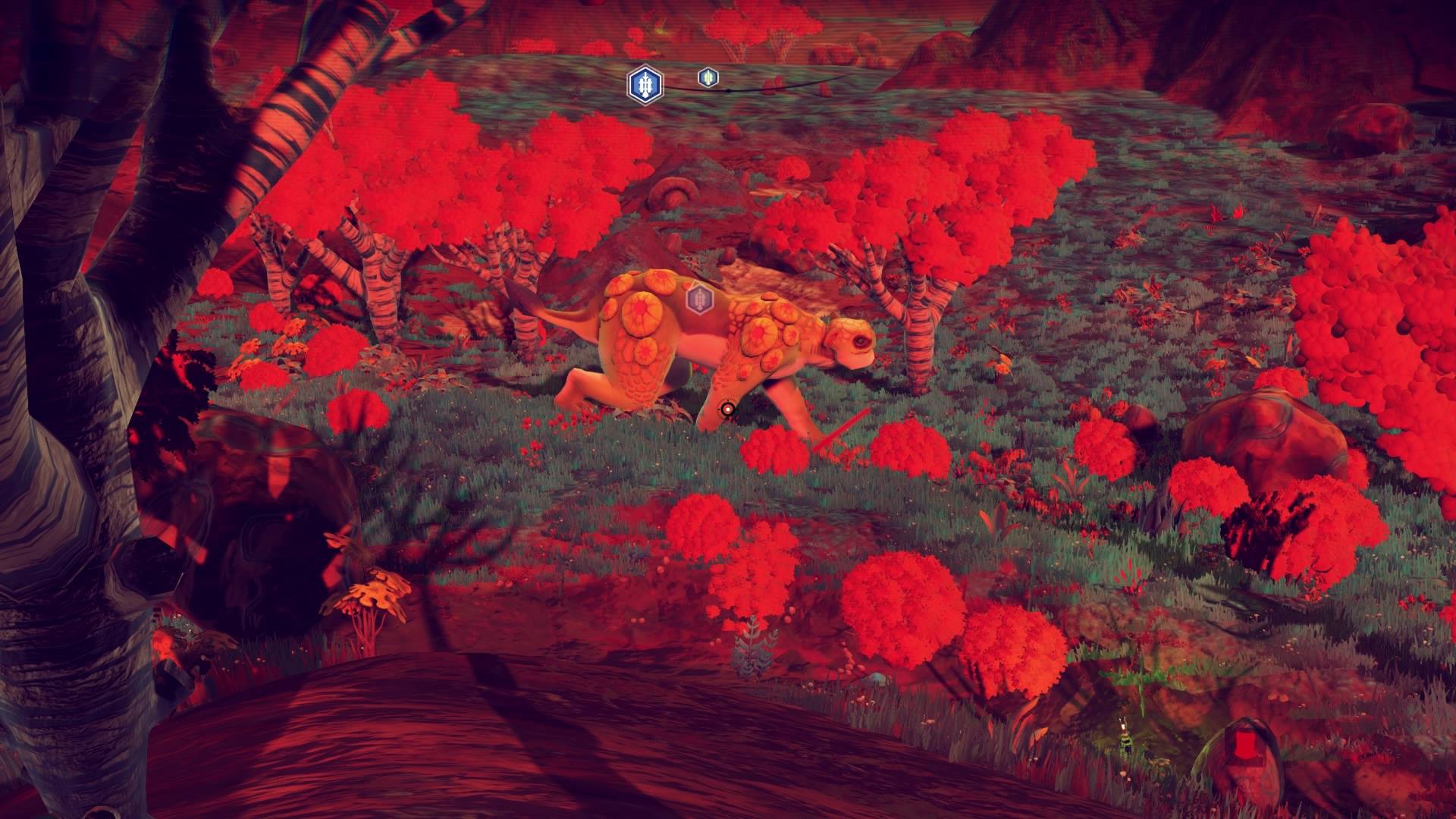 Didn't expect to find a creature this large so early! I called him Heinz, because everything around him is an obnoxious ketchup red. 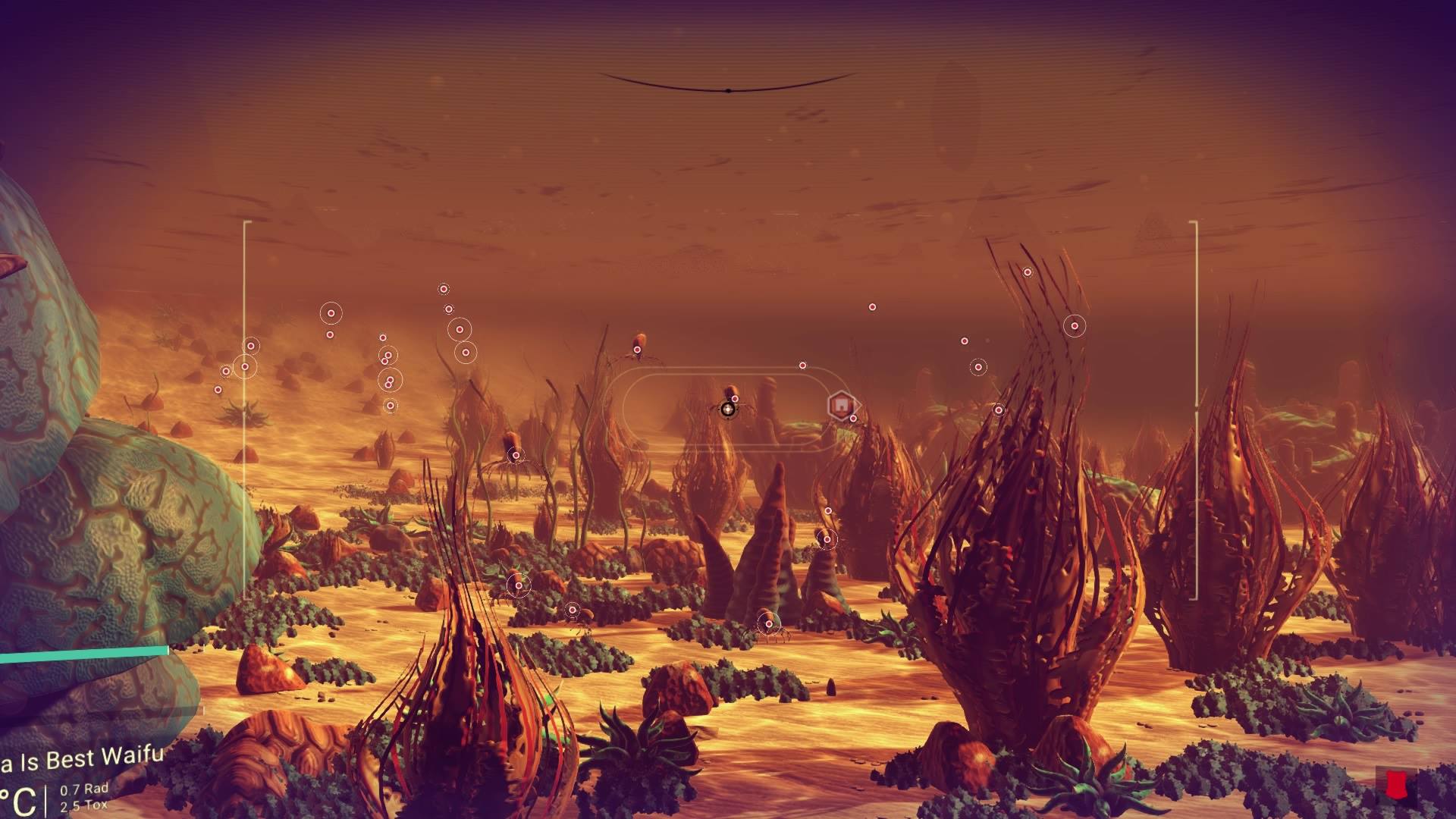 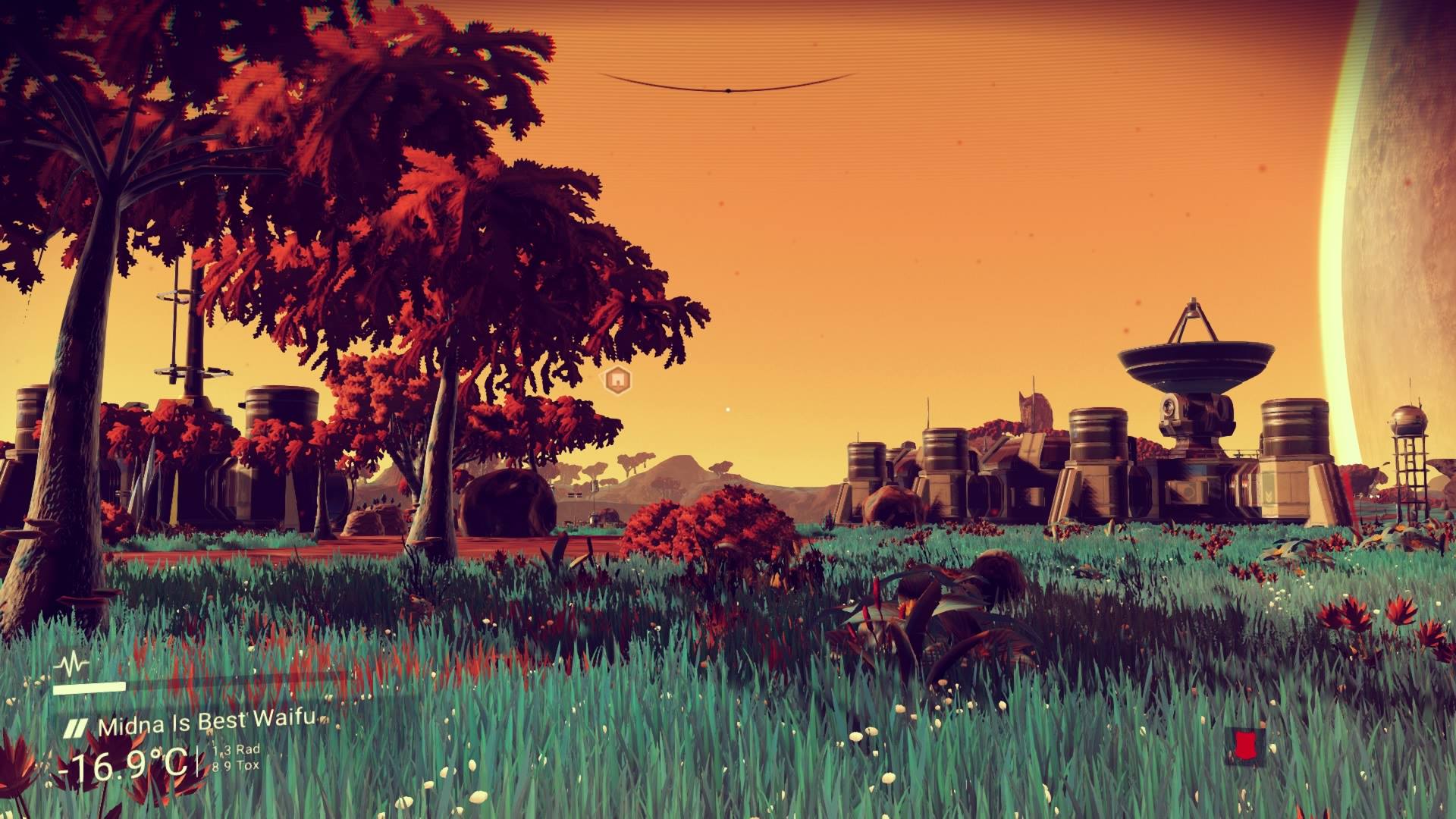 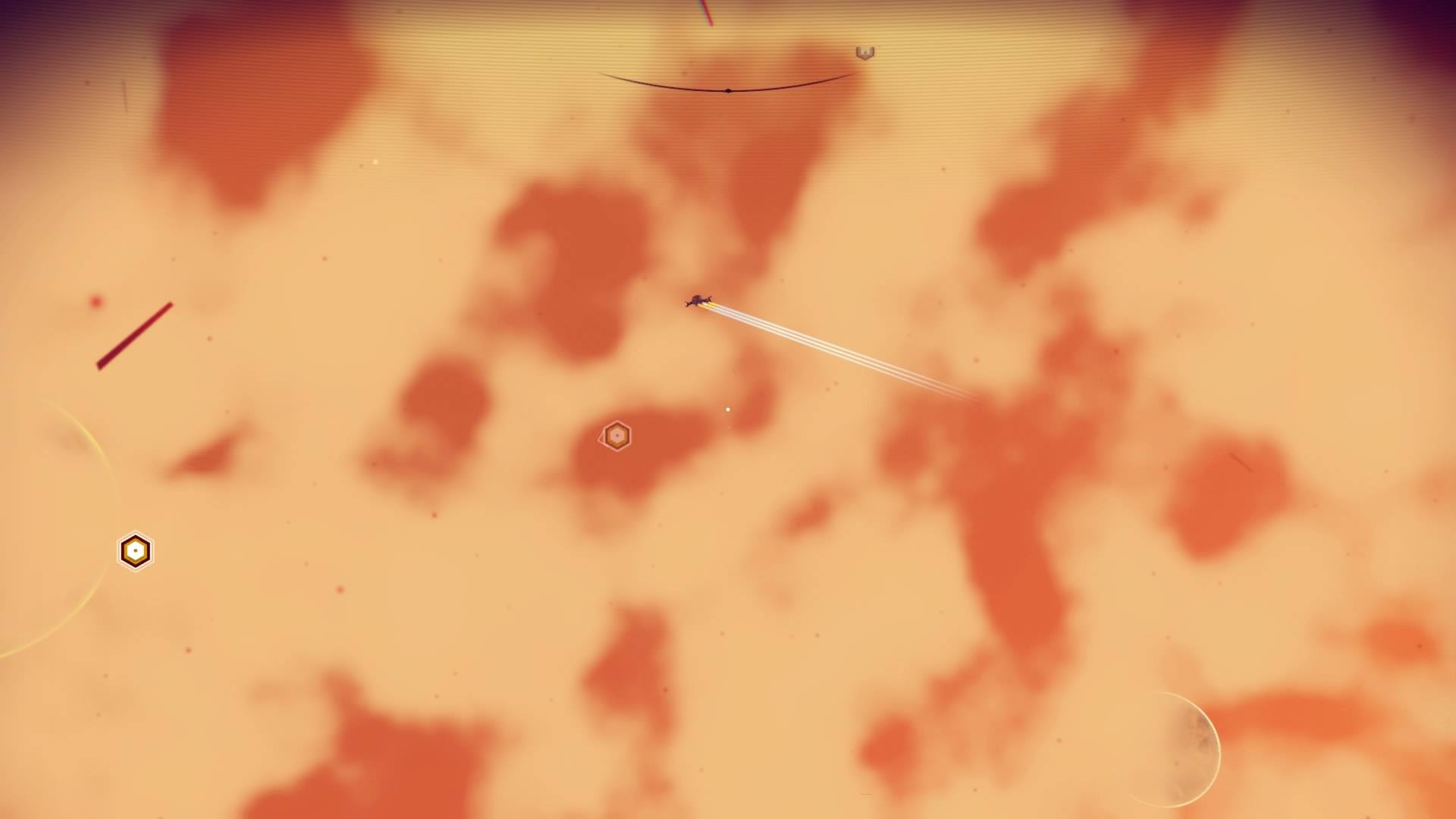 I'm a stickler for optimization of my inventory space, so I spent a good load of time with this same trader. Here he is flying away to tell all his friends about this lovely, naked human he met on "Midna Is Best Waifu". 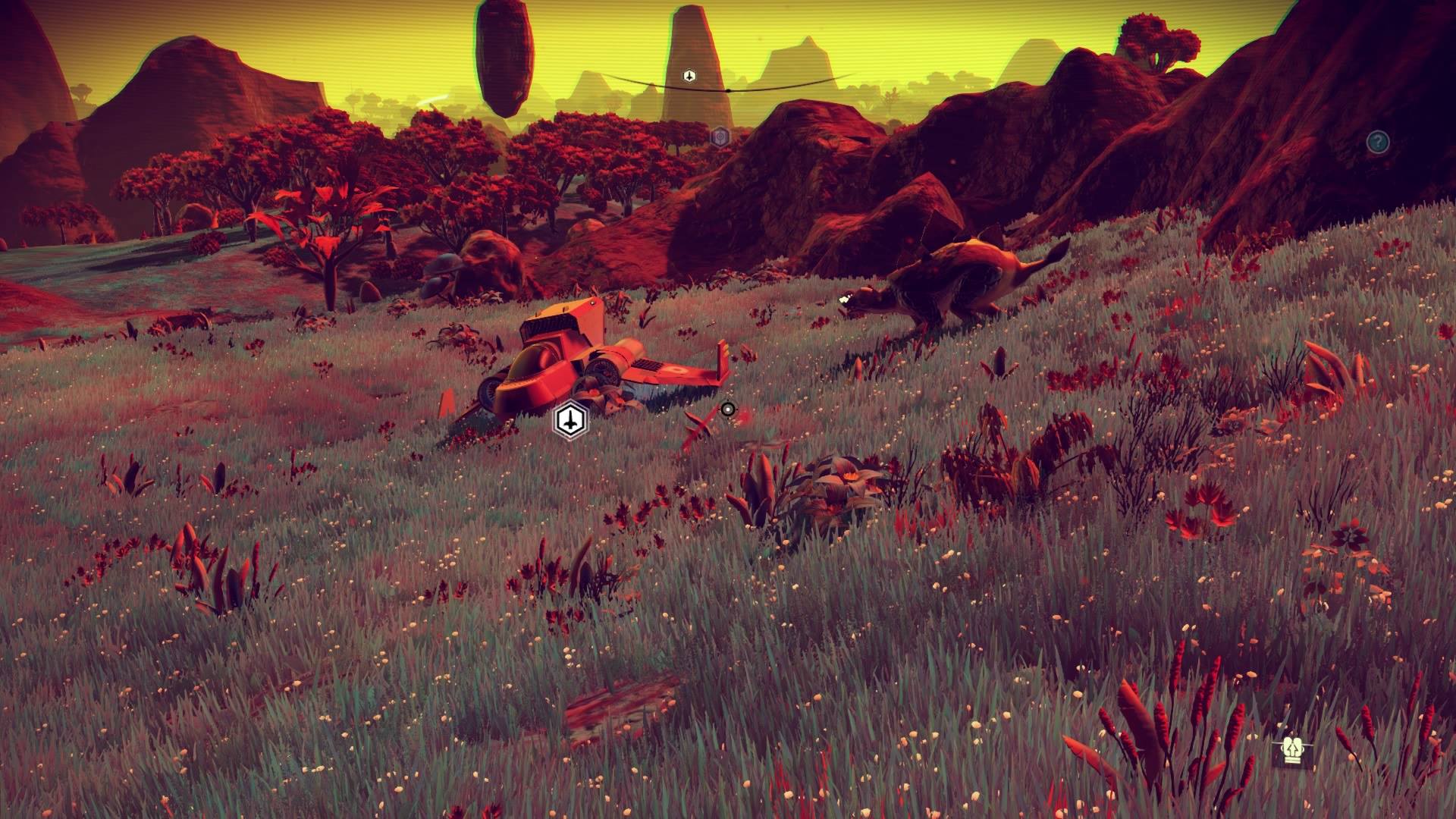 Hey, Heinz! Get away from my ship, you hozer! 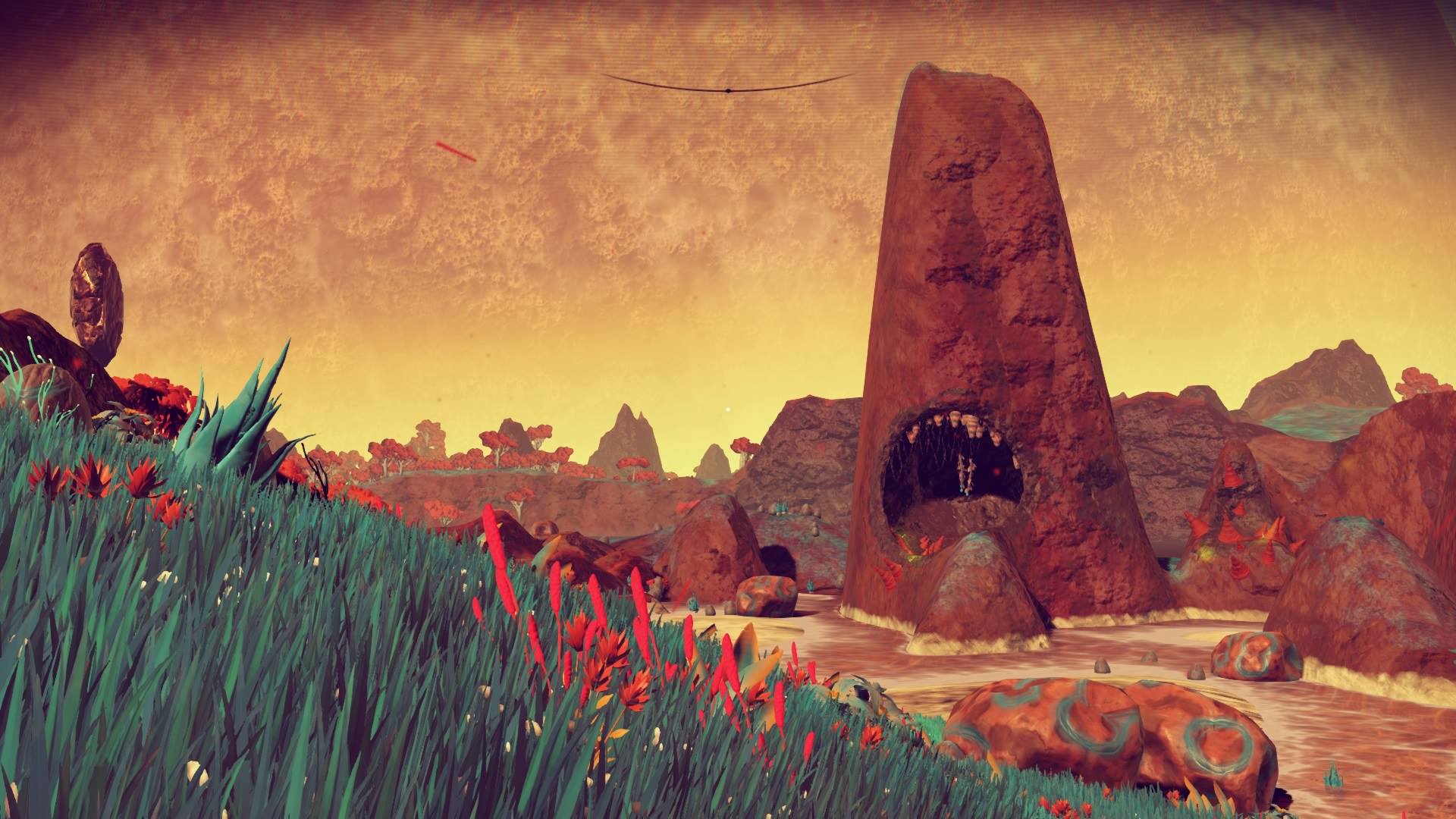 A mountain screaming a hearty "Hello!" to me. 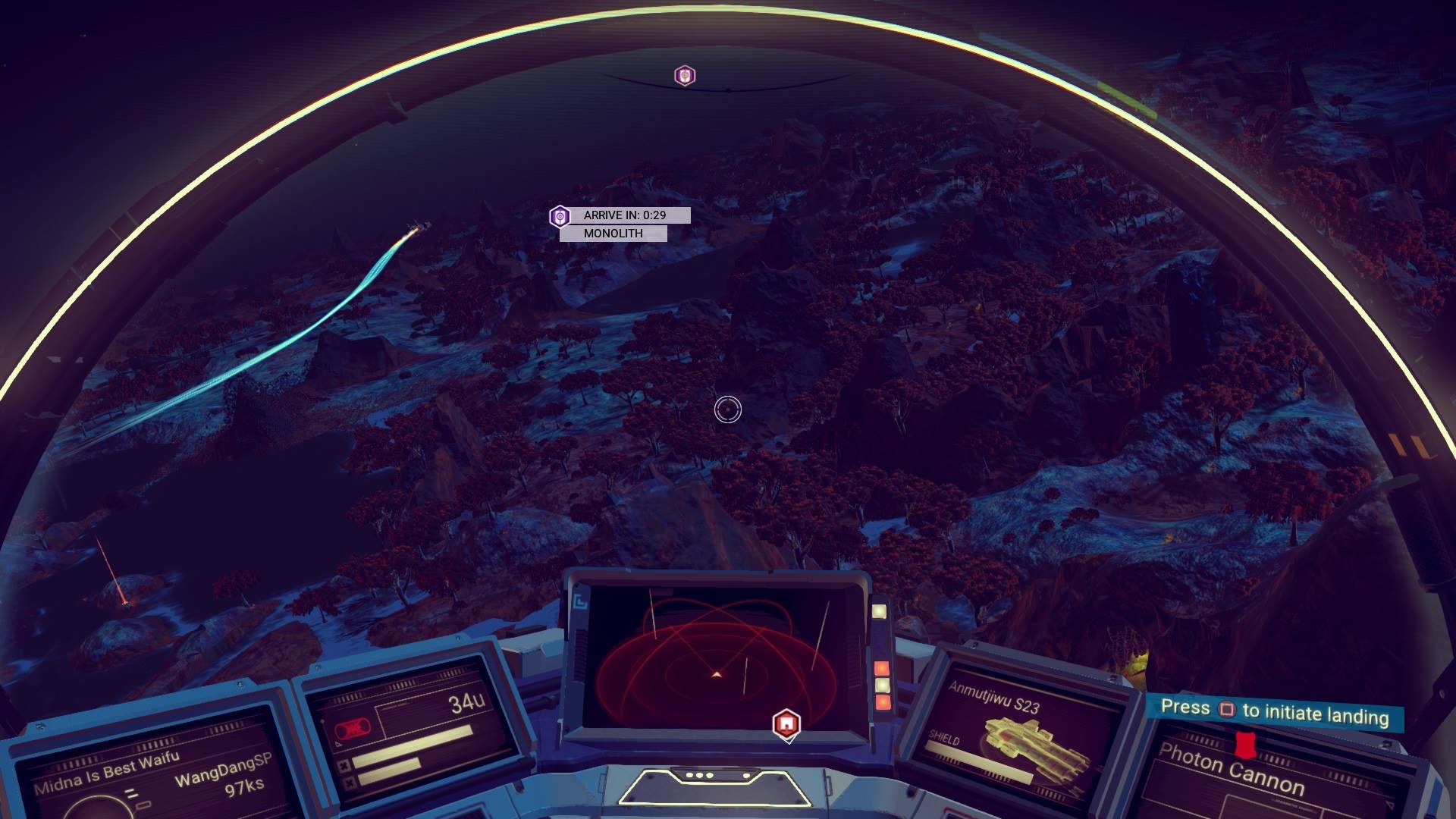 Off to new horizons! 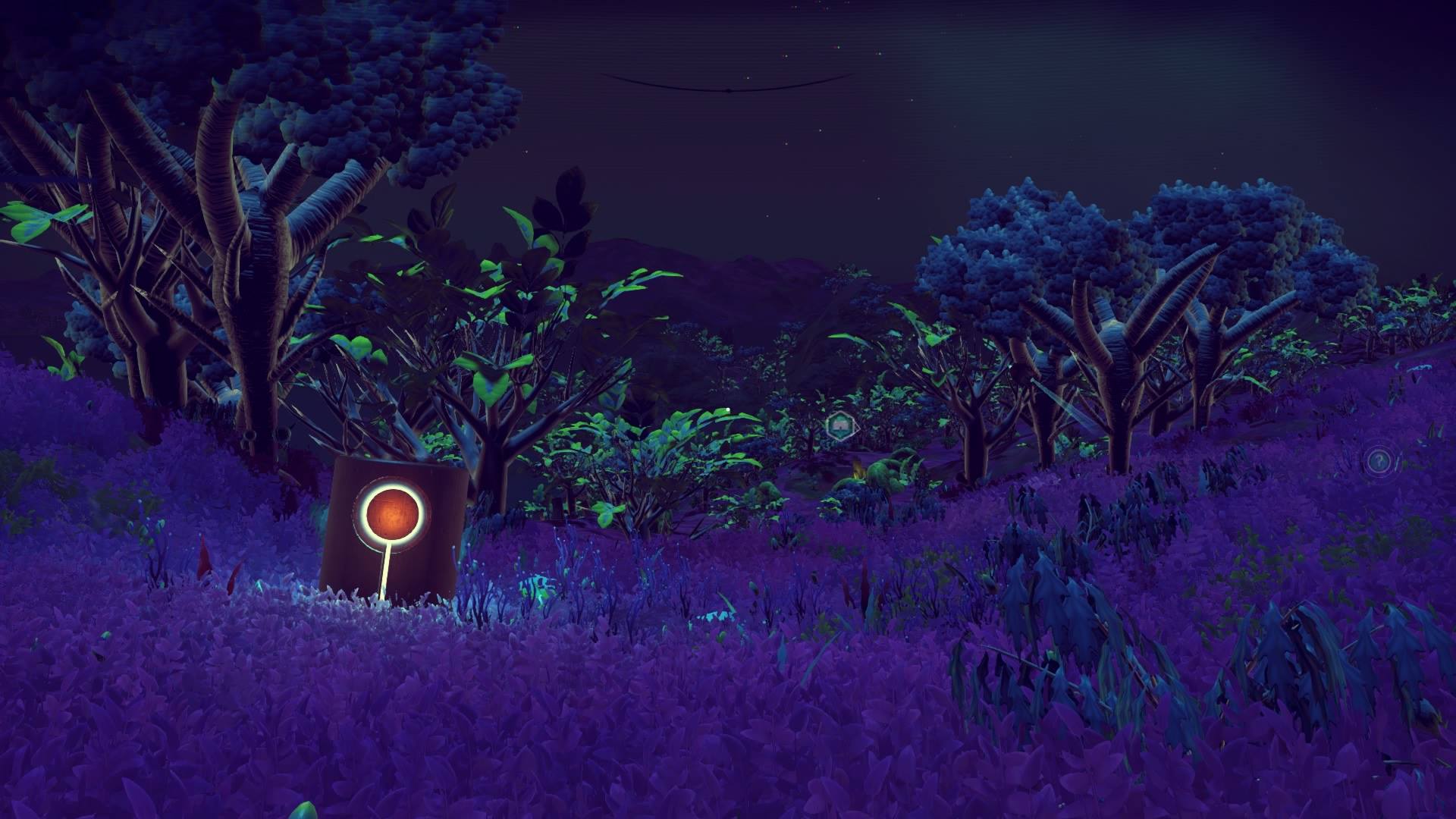 There may be a lot of visual trickery afoot to make these scenes work, but the game can occasionally look absolutely gorgeous. 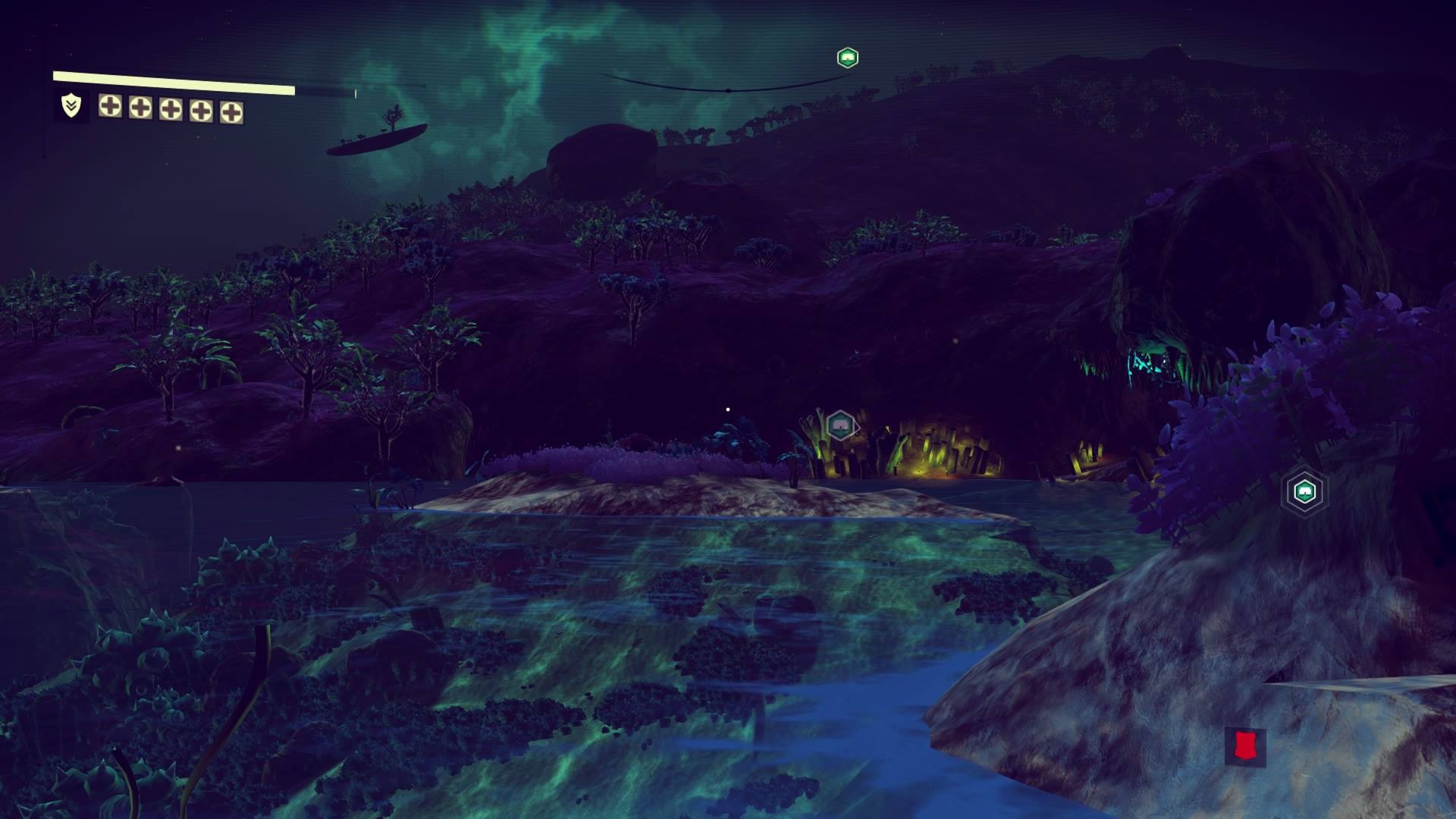 I'd build an outhouse on that island. Seems like a relaxing place to take a shit. 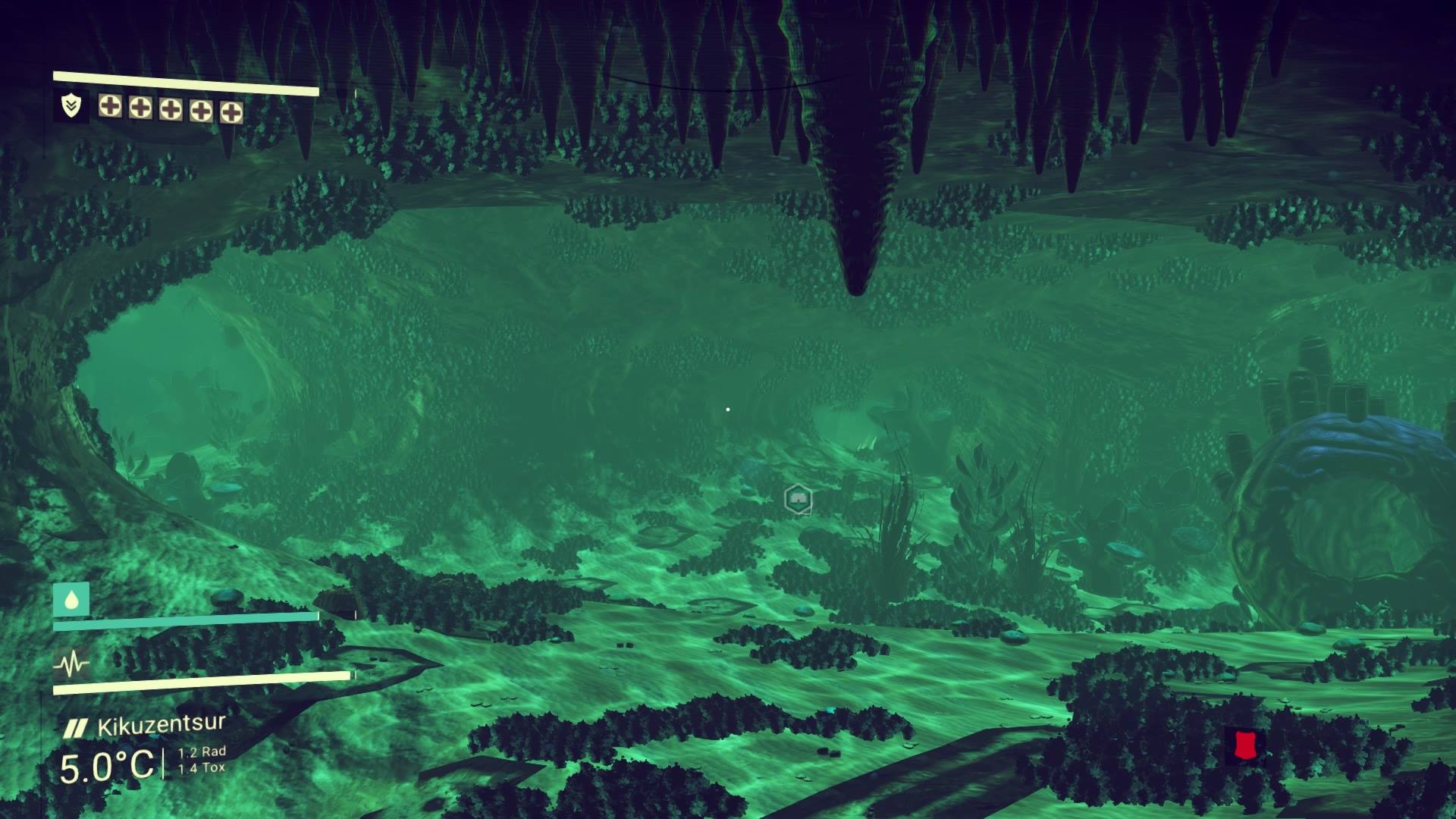 Some of them seemed impossible to spelunk without an upgrade to my oxygen tanks. I assume those are a thing. 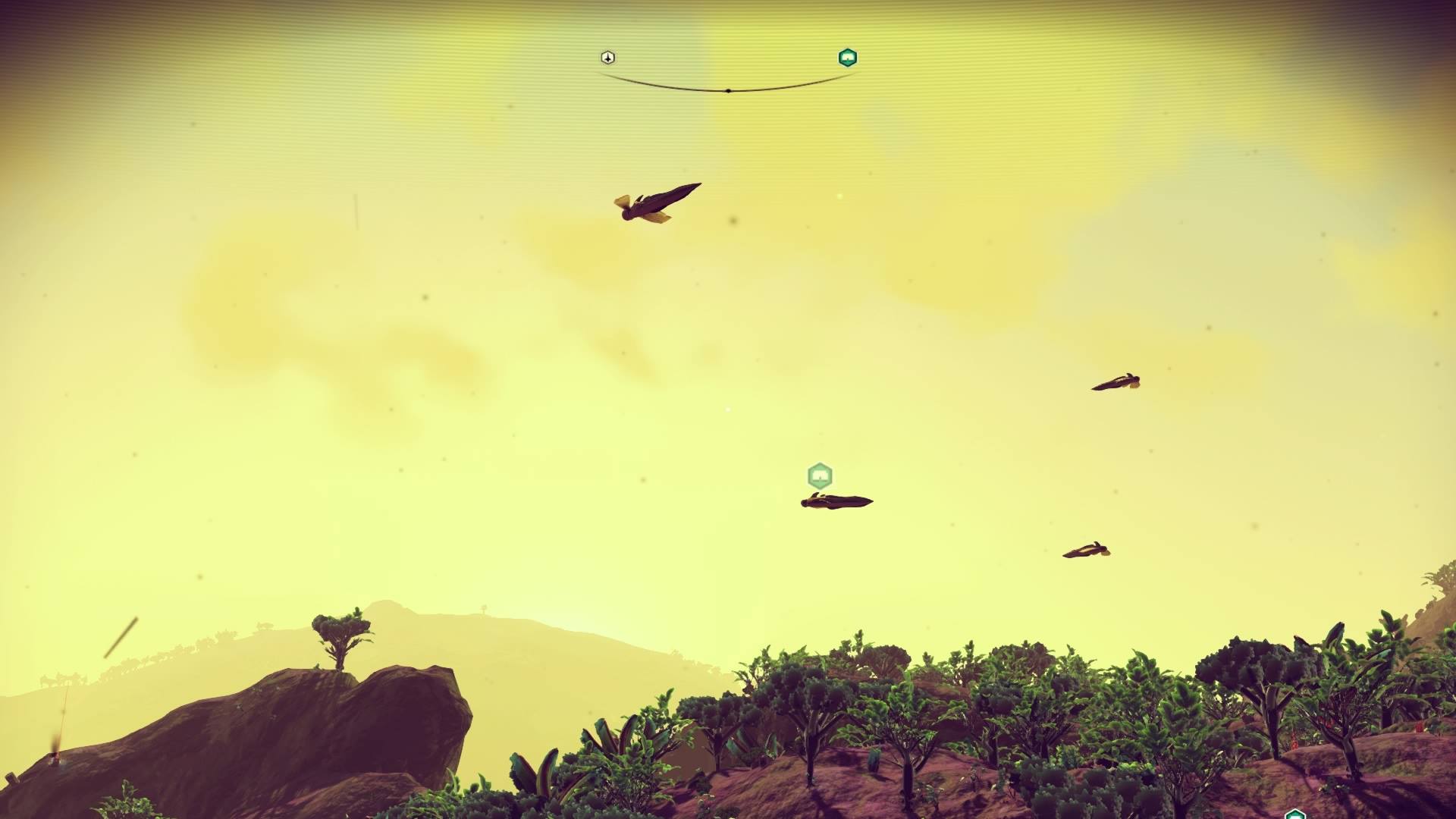 It might be hard to tell from the viewpoint, but these things are sort of like flying fish eels with leech faces. Thaaaaat's procedural generation! 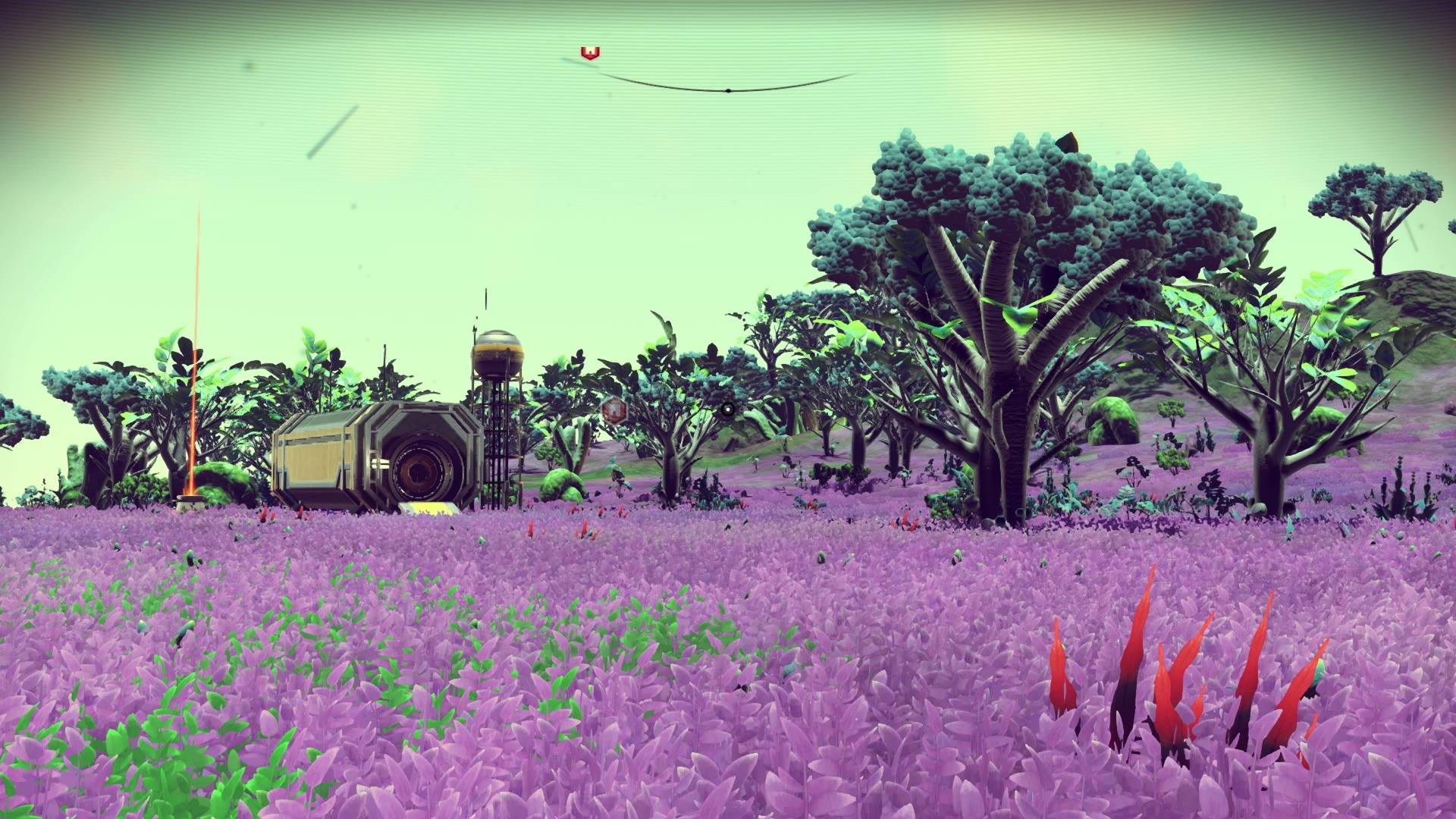 Once more with the high density vegetation! I really really liked the color palette of "Fasteayk". 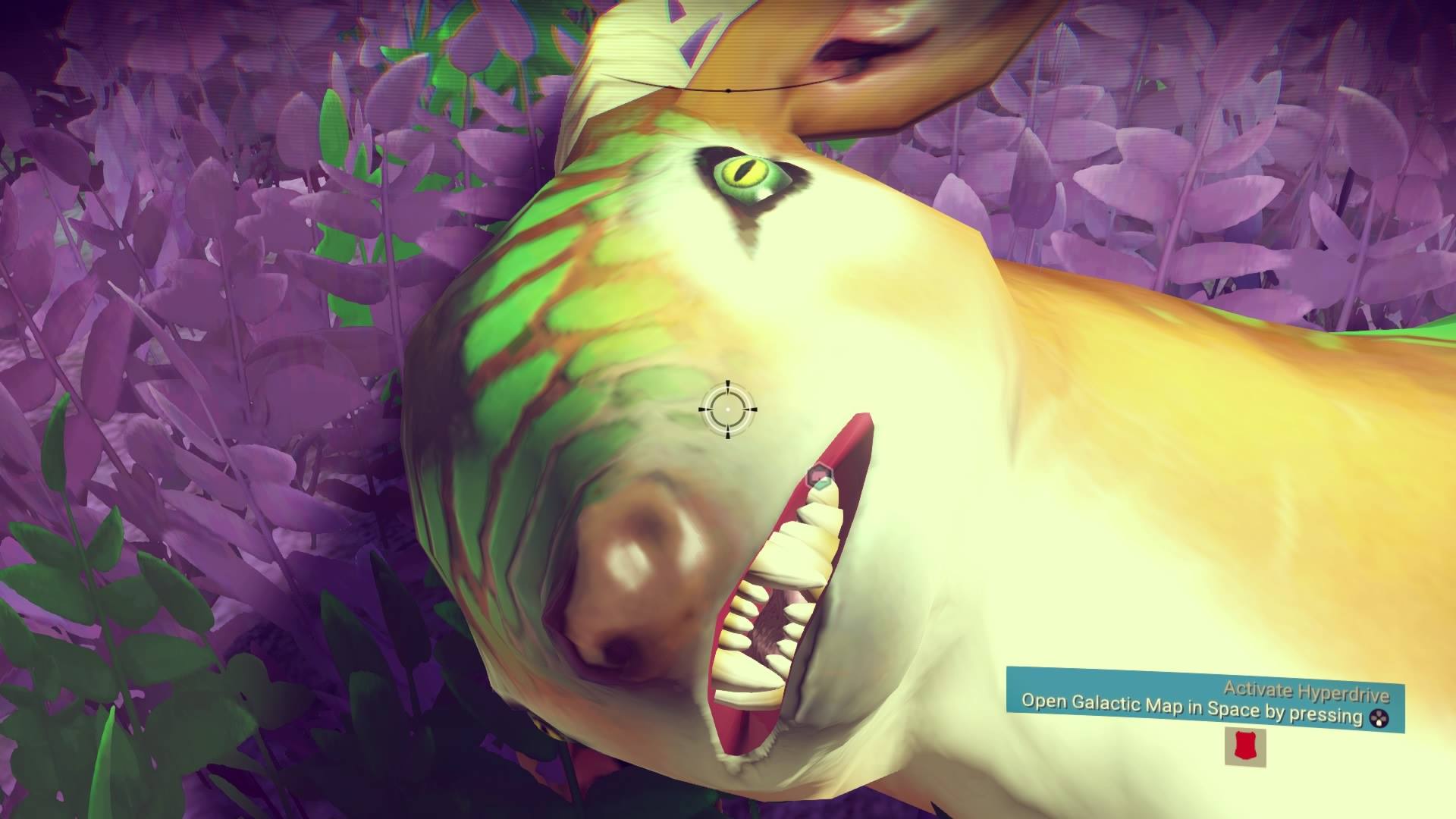 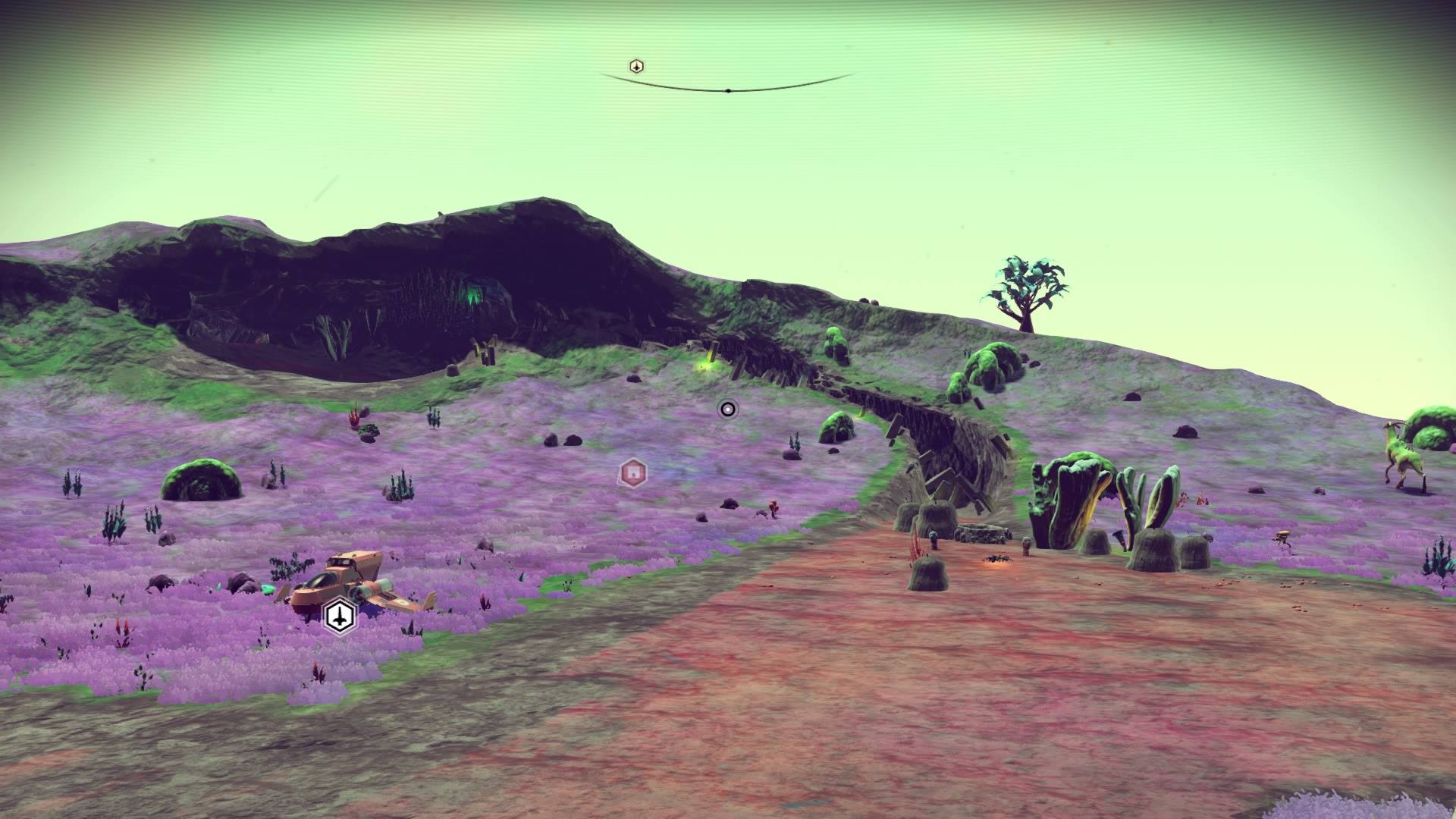 Some of these formations look explicitly handcrafted. I'll be keeping an eye out for this one again! 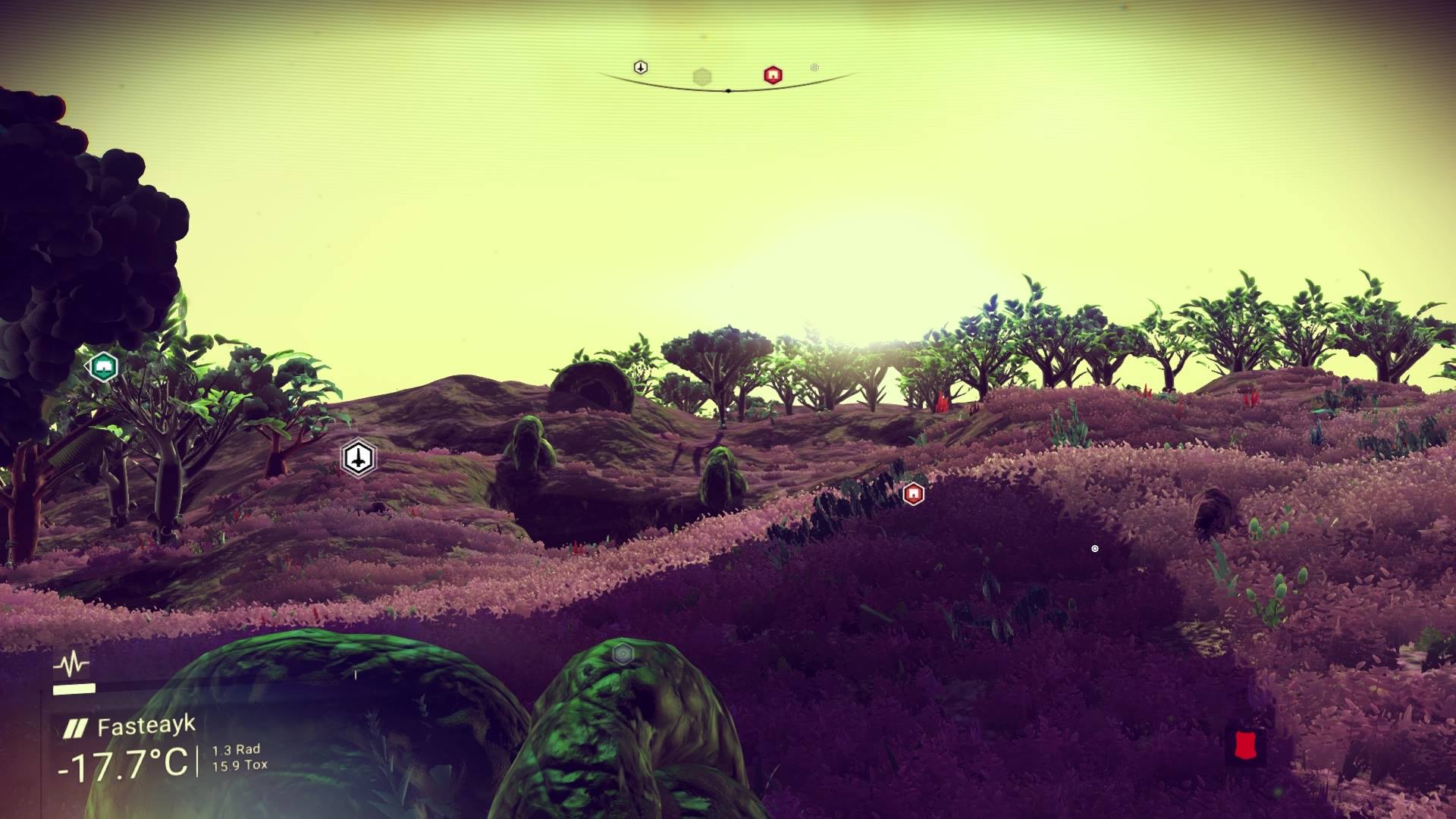 A sunset throwing me a farewell

Now we venture back to Planet 1, "Nekronia"! There must've been some nifty schlock I missed there whilst I was busy trying not to choke on the air during the tutorial.