I was a big fan of Doom growing up in the 90's, but I somehow missed out on all of the "Doom Clones." I had a demo CD for the Mactintosh version of Star Wars: Dark Forces and I played a lot of Goldenye 007 on N64, but I never really played anything else like Doom.

One of the friends I made in middle school introduced me to Heretic and HeXen, but I couldn't find copies for a reasonable price. Instead of borrowing or bootlegging the game, I decided to just wait until I had enough money in the future (which never seemed realistic at the time).

Flash forward to today and I've somehow managed to have Heretic on my Steam account for 5 years without playing it. I had forgotten about the QuakeCon pack from 2011 that included every iD title from that moment. Much to my surprise after having a Doom craze, I had some more Doom to explore. 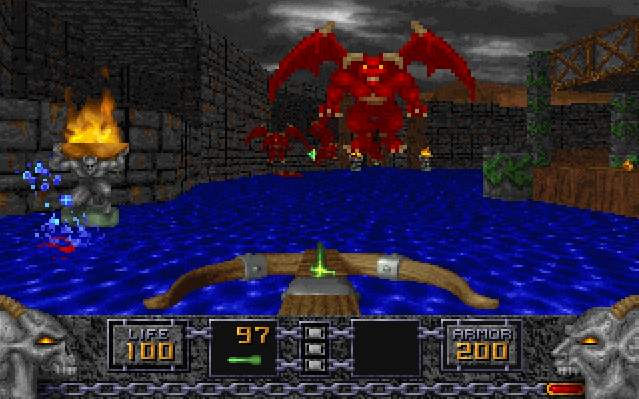 Calling Heretic a "Doom clone" is doing the game an injustice, but it certainly has a lot of game feel similar to Doom. Almost every weapon is a reskin from Doom 2 and most of the monsters share similar properties to enemies seen in Doom. The designs are incredibly different (and really diverse), but it's hard to initially get out of your mind that Heretic is just Doom with a different coat of paint.

Eventually, you start to pick up on some of the changes that developer Raven Software has crammed into Heretic. For starters, this is the first FPS I can think of with an inventory system. It allows for the level of challenge to be ramped up since the player can constantly hold a source of health on them.

Not only that, but you can carry around various power-ups to use in sticky situations. Other shooters at the same time forced you to utilize anything you picked up then and there; Heretic puts more control into the players hand with the inventory system.

It is a bit annoying how you need to scroll through and additionally select an item before using it, but I'll let that slide due to the release date (1994). That something so genre bending was even pulled off on the Doom engine is just awesome, let alone how chaotic it makes combat feel.

Each weapon has a different ammo type. It solves the mini issue Doom suffered with having the pistol and chaingun share ammo; getting the chain gun made the pistol redundant. In Heretic, every weapon feels valuable at any given time. Even the dinky starter mage staff can become awesome with the correct power-up. 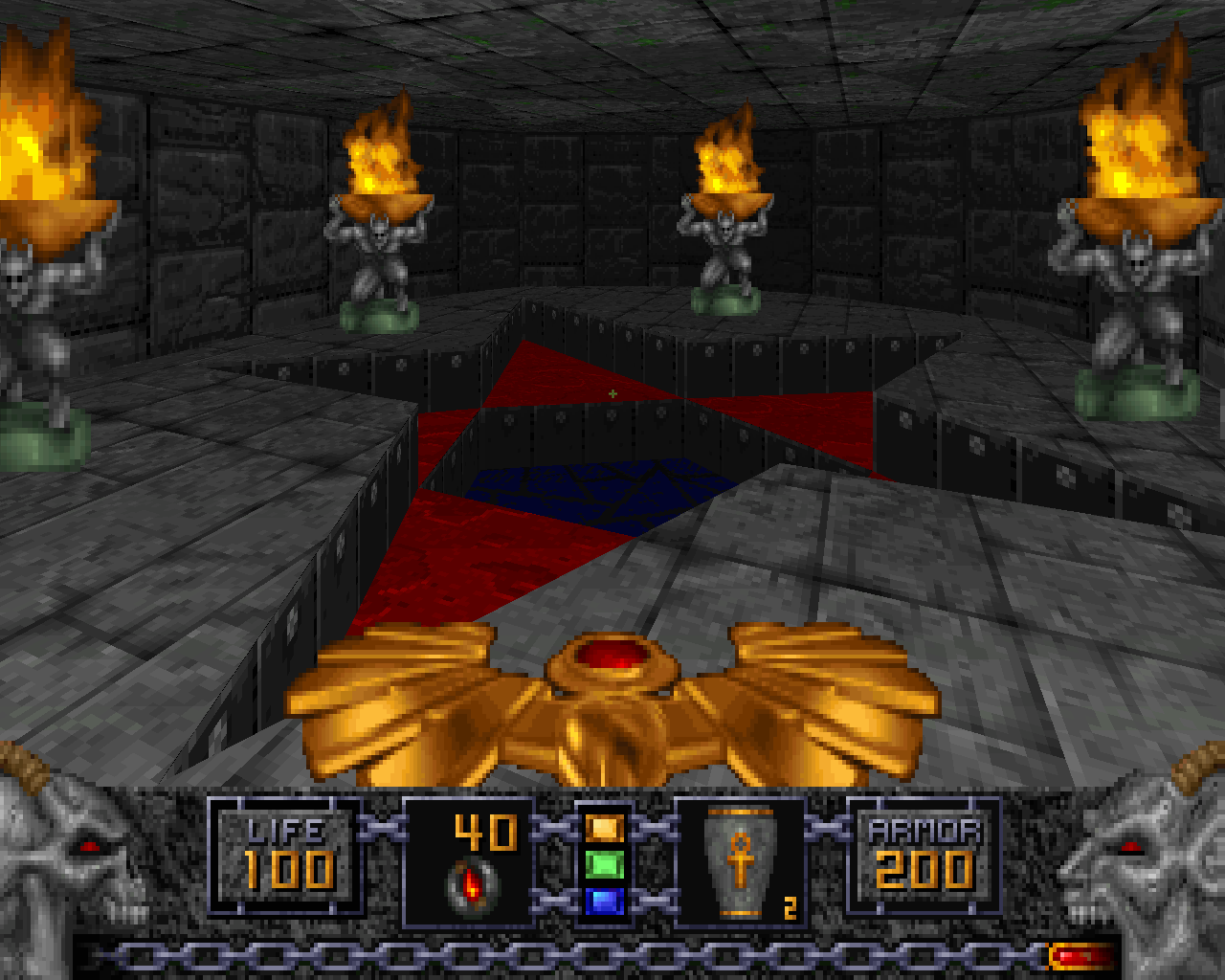 What isn’t so hot is how predictable the game becomes. At first, you're not quite sure where to expect enemies to spawn from. Walking down corridors has walls dropping and enemies flying at you from all sides. By the time you reach the third episode, you've seen basically all of the tricks Heretic is ever going to throw at you.

That may have more to do with the original game only being 3 episodes, but episodes 4 and 5 really suffer from a lack of creativity. They are definitely difficult and well built (better than the rest of the game, even), but it feels dull after having played through 24 maps with similar layouts.

This is coupled with how the level design tends to have a lot of dead ends that require you to return to a centralized location. I'm guessing this was a precursor to the level design in the sequel, HeXen, where every map has a hub world. It does lend to some insanely confusing layouts, though.

The sound design is also pretty lackluster compared to Doom. On its own, the music is okay and the monsters sound like monsters, but nothing is distinct and most of the enemy sounds play at the same volume. It doesn't feel as immersive as Doom, nor does it help the player distinguish which enemy is in an area with them.

The overuse of the first boss is also pretty lame. Maybe that is down to me playing on the second hardest difficulty, but I do wish there was more diversity in the boss encounters. Facing three of those floating giant skulls level after level becomes grating. 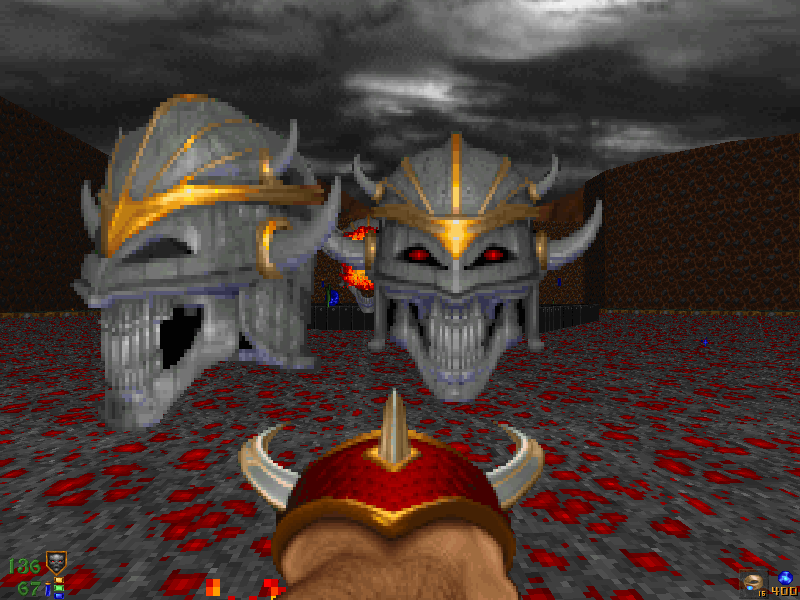 With all of that said, I still found Heretic to be really enjoyable. It contains enough originality that any comparison to Doom sounds nitpicky. Sure, Doom may be an overall more polished and enjoyable game, but that doesn't make anything done in Heretic not worth seeing. Heretic is also considerably harder, so Doom veterans will be in for a treat.

Getting the game running on modern operating systems is also a breeze. Since id Software released the Doom source code a long time ago, any modern Doom source port works with Heretic. You can boot up zDoom and get Heretic going in any manner of resolution you want. Full mouse look is enabled and keys can be rebinded to whatever your fancy is. There is even support for internet play, which is pretty damn awesome.

It also doesn't hurt that the current price is exceptional. $5 for a game that will take around 6-8 hours to finish is just solid value. If you want to spring a bit more, you can get the rest of the series on Steam for $5 more. That includes Heretic, HeXen and HeXen II. That's a lot of classic first-person shooter action for a small chunk of change.

However you slice it, Heretic is pretty good. There are definitely things that Raven Software could have done to distinguish it from the crowd, but for a first attempt from an unknown developer, you could do worse. For the price, you'd be hard pressed to find much worse, though.

A solid game that definitely has an audience. Might lack replay value, could be too short or there are some hard-to-ignore faults, but the experience is fun.