So I made a couple more destructoid cards

It's been a while since I made my Destructoid-themed Magic the Gathering cards, and since I was in the mood I figured I might as well get another batch of five ready. This time around, I went a bit crazier with abilities, while trying to stick to the themes of each associated community member. On top of that, I went with creatures instead of planeswalkers, in order to make these cards feel more unique compared to the previous bunch . As always, feel free to make your own if you have Magic Set Editor installed. It's very easy to learn and use, and you can just download the first set of cards I made as a tutorial or guideline of sorts.

As a quick recap, first Magic the Gathering has 5 colors of mana, each with different playstyles: blue, red, green, white and black... Wait, now it has a sixth one! Colorless mana is now its own color, and some cards require mana without color (instead of being able to be paid with any color) exclusively nowadays. Still, this is an old school blog with old school rules, so no special snowflake colorless community member today.

A tale of Neps and Souls, eternally retold.

I don't know if you've heard, but Gundy's been playing a lot of XCOM. These strategy games feature permanent death, so poor planning or bad RNG can cost you a soldier forever... And Gundy has unfortunately gone through a lot of his army of Nep clones and Destructoid users trying to defeat the alien invasions. I felt like this cycle of life and death worked very well with a card combining white mana and black mana. White mana tends to be more about protection and large armies over single destructive monsters, so Gundy has the ability to regain life when damaging things (lifelink) and killing creatures in one hit (deathtouch) while also being fairly frail himself. 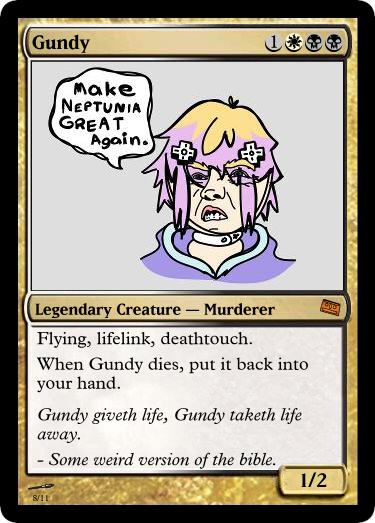 Not only that, but like in real life it's very difficult to get rid of him... If he dies, he'll just go back in your hand!

The Angriest Carp you know.

Red is the color of rage in the world of Magic. Red creatures tend to have low mana costs in order to play them quickly on the battlefield, and they don't tend to last long... More expensive red creatures tend to be able to attack as soon as they're put on a battlefield (with the Haste ability) just like a berserker, and often have more damage than health which means they're destructive but also frail. Blue is mostly known as the color of annoying players since it's less about battling and more about messing with the game, by drawing more cards, returning enemy creatures to the opponent's hand, preventing other players from casting spells, etc. As such, my objective when making Carp's card was to be something that's powerful, self-destructive and versatile... A bit akin to Carp's explosive character! 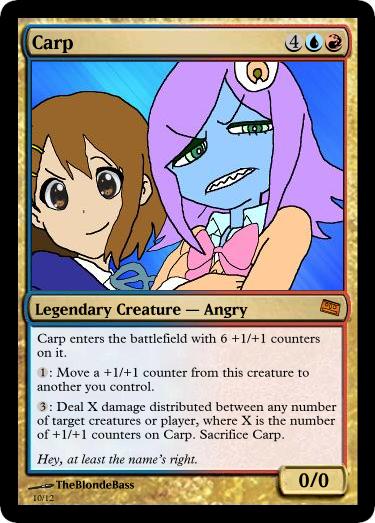 With 6 power and 6 defense, Carp is already a pretty strong creature... And having its strength determined by +1/+1 counters means he can easily buff up by using cards with the proliferate ability, which adds counters to creatures that already have counters. All of Carp's abilities cost him his own strength and defense in order to mess with the battlefield, either by distributing strength around at any time to change the outcome of combat (first ability) or by sacrificing carp entirely to deal just the right amount of damage to just the right targets to finish the game. Being able to distribute 6 damage as you like is a very, very scary ability indeed, and your opponent will definitely play differently once they see this card in play... Especially since you'll be able to use it right as carp would normally die (by an opponent spell or combat). Thus, he's able to pack a mean, angry punch while messing around with the battlefield, a fun mix of both blue and red archetypes.

Blue, the most human color.

You know the drill now. Blue's about being annoying with mindgames, and white's about creating lots of little creatures and being less about destruction... But see, this card about our very own hitler, Malthor, so these color take a very special meaning here... His card has to be the most diplomatic indeed! 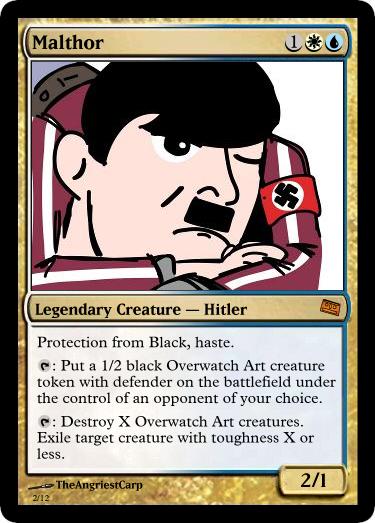 Malthor's very fun to be around in a group chat, being one of the rare voices of reason... but you don't want to get him started on overwatch art! He can fill up a chat with pictures of Gremlin D.Va in seconds. As such, his gimmick is to give poisoned gifts to the other players, giving them weak creatures that can only be used to defend themselves... but also get rid of them at a moment's notice to exile the real threat on the table! I think he'd be at its most fun to play in free for all battles between 3 or 4 players, with diplomatic decisions over who gets the creatures becoming a factor.

While haste isn't associated with either blue or white particularly, I felt like it'd be an important ability to add in the case of a mirror match up. Being able to play Malthor and immediately destroy the Overwatch creatures on either side of the battlefield to get rid of an additional monster could make all the difference in the world.

Green creatures tend to be able to fight flying creatures and ground creatures alike with their far reach... Similar to Malika's grasp you can't escape from. And while red is the color of rage, it's also the color of emotion, so lewd definitely counts as a red-associated ability... Plus Madoka's pink and pink is kind of like red and shut up, I'm the one who makes the cards. 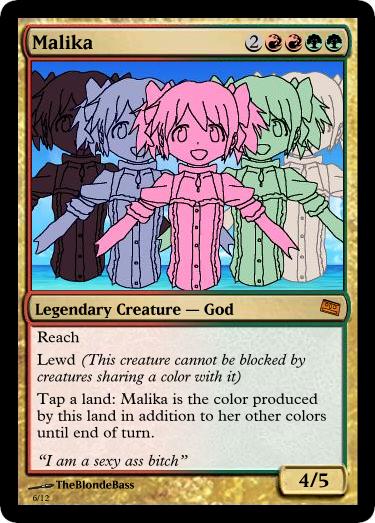 A bit of background... The Intimidate ability means a creature can only be blocked with creatures sharing a color with it, except if it's an artifact creature... the reasoning being that artifact creature are less emotionals compared to the rest, I presume. Thus, the lewd ability would do the opposite! If you share a color with a lewd creature, you're too shy to defend against them. Thus, Malika can already prevent being blocked from two colors in the mana pie, which is fairly powerful...

In this case, however, Malika isn't restricted to the colors of mana life has given her. Indeed, if you play a deck with multiple colors of mana, you can tap lands of the remaining colors to grant Malika the ability to avoid being blocked by said colors for one turn. As such, she can end up being just what your deck needs to deal damage to a more defensive opponent. 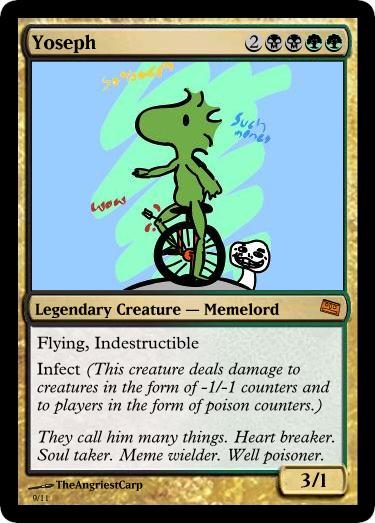