When we talk about Vanillaware games, it is fairly common that the discussion veers towards aesthetics and presentation. Pretty 2D art, nice music and whatever character has the largest breasts seem to be the primary talking points. Discussing the actual gameplay mechanics of Vanillaware's games seems to rank last on the list of priorities.

Should you see an actual discussion on a Vanillaware game's gameplay mechanics in the wild, even that sometimes seems to miss the point since the common gripe is the games are too "grindy." Grinding, to me, is just killing stuff over and over. Vanillaware seems completely obsessed with my characters characters sitting down and stuffing their faces with food. They want you to see this happen often and your chaeacter's progression is tied to it as well. 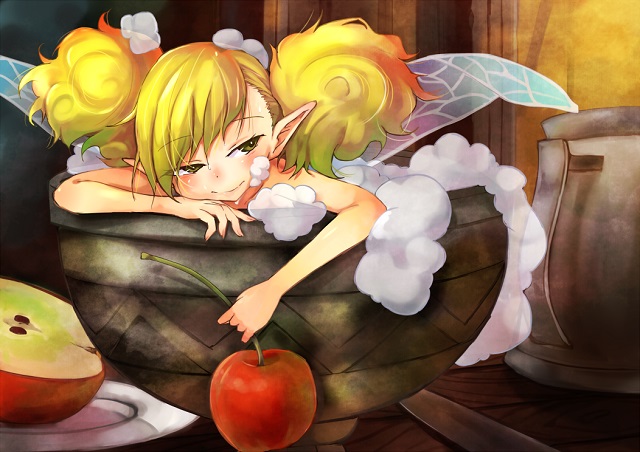 What's interesting is that buried in the mechanics of these games, there's actually something of a message about which means of eating food is the most pleasureable and fulfilling.

Let's start with Dragon's Crown, since it has the most traditional, video-gamey way of approaching food. Hell, the game starts in a tavern and the character selection screen has our adventurers gathered around a table full of food. Before we even start the game, we know these people are well-fed and, man, the Dwarf is just chowing and chugging it all down. 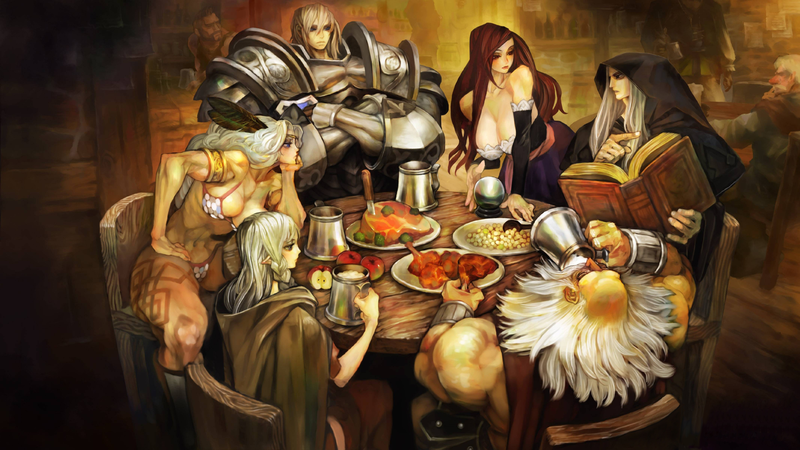 From there we go into the game and you bash boxes which may contain weapons, gold or food. Apples, pears, pretzels - if it was good enough for Pac-Man to eat, Dragon's Crown leaves it in old, musty boxes for you to find.

That and nobody questions the potential for food poisoning here. Simon Belmont didn't question the meat he found in walls. Cody, Guy, Haggar, Blaze, Adam and Axel never questioned the apples and turkey they found in gas canisters and stacks of tires. Given Dragon's Crown comes from the school of Final Fight and Streets of Rage, health restoration is just this simple. Eat food, get back health.

Though Dragon's Crown does require you to stop taking other actions before your Dwarf or Sorceress noms that apple three times and it disappears. Odin Sphere does this, too, though you must select to eat the food first. Either way, you're at risk of being tagged by the nearest monster if you're not too careful about it. This, I believe, was taken right from the Monster Hunter series. There, if you eat cooked meat or chug a potion on the field, you are totally open to getting tagged by any beast you've upset. Totally fair, considering when the monsters go eat or try to sleep, you can wail on them. Every action has an equal consequence.

Muramasa goes for the more traditional instant consumption of food and this food can be bought from merchants or found on the field. The reason for this design difference is sometimes parts of Muramasa's levels are locked off during random battles and getting tagged by enemies for eating while trapped isn't terribly fair. The only catch to instant consumption is you must have your feet on the ground to eat. It's usually where you don't want to be, so that's the way they added the risk back.

Here's where we say goodbye to Dragon's Crown for now and turn our attention to Muramasa and Odin Sphere for a bit. In both games, food serves a function beyond health restoration and also serves as a means of progressing your character. In Odin Sphere, the act of eating food grants EXP and, initially, the fastest and best way to level up is growing food in a safe place and eating it.

Here you "water" plants with the souls of the fallen in the form of Phozons. Feed the seed enough Phozons and you can grow all kinds of fictitious fruit and even sheep.

Yes, sheep. Video games! It begs the question why you must still hatch chickens, but whatever, you grow sheep like fruit in Odin Sphere. 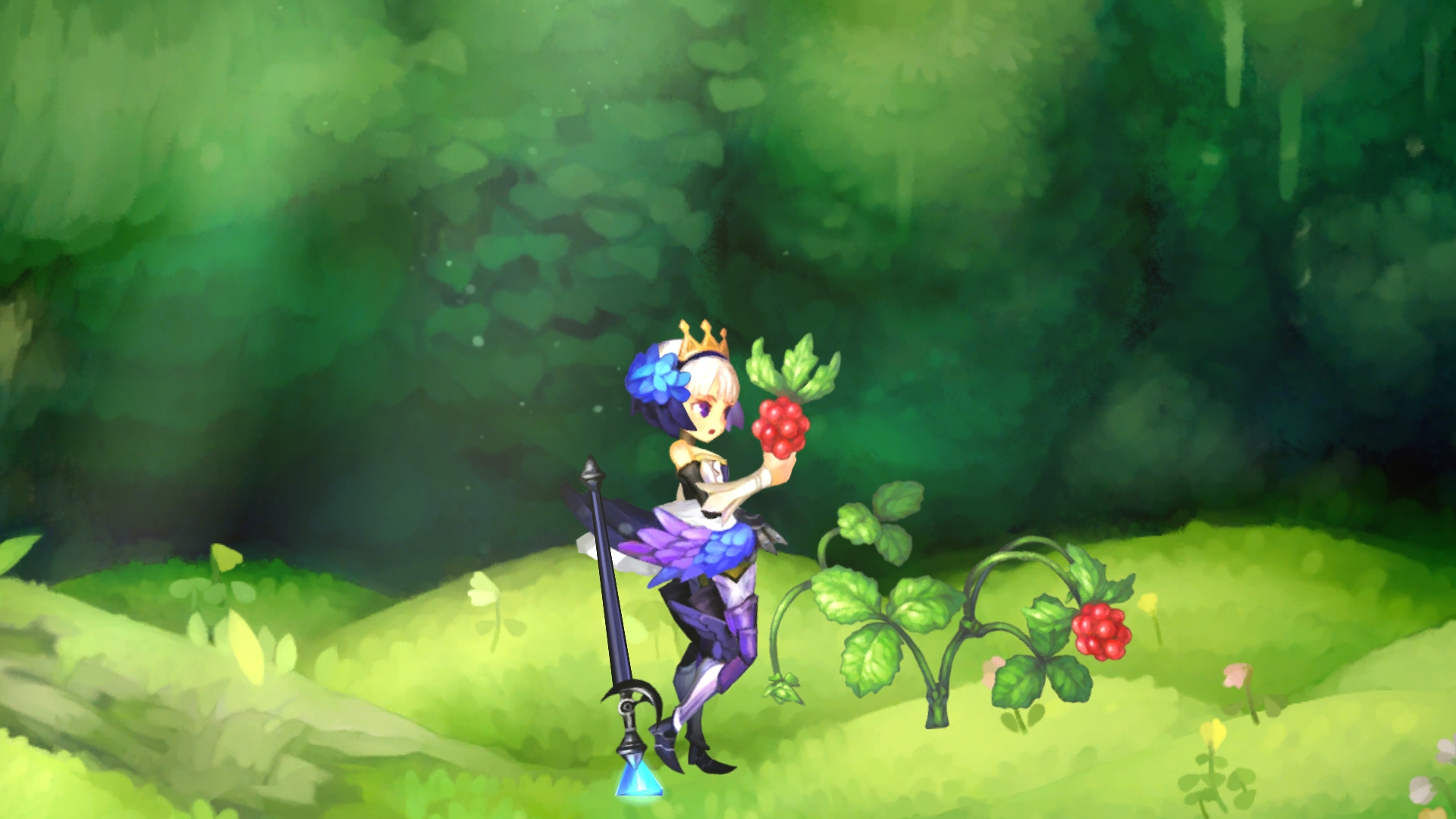 Anyway, early on you want to take a break from the grind to grow food and eat it. Or you can save it for health restoration in a pinch. I'm not your mom. Still, this method has diminishing returns for EXP gain within the first twenty levels and alchemizing potions is much more effective for restoring health even early in the game. Even so, you want to at least grow this food at times and store it away for a later, more useful purpose.

In Muramasa, you have three forms of progression. You have you bog standard "kill shit for EXP, level-ups and stat gains," but there's a bit more to the progession than that. See, by obtaining a Muramasa-forged demon blade and being a master of the Oboro fighting style, you're able to forge a contract with Hell's Blacksmith, the titular Muramasa.

Muramasa only asks two things of you: He wants his blades to feed on the souls of your enemies and for you to keep your spirits high. Do this, and he'll keep on banging away in the forges of Hell to make new swords for you. So souls are another currency and, naturally, you'll be killing lots of people and demons to this end.

Spirit is the other currency and you only get that by only by eating and drinking. The most accessible food be found from traveling merchants. It starts simple with simple fruits, medicine and sake, but later on the most spiritually satisfying and best portable health-restoration comes from peaches. Good choice for feudal Japanese snacking.

Welcome to the shortest section of this blog. Going out to eat is the middle tier of food consumption and character progression in Muramasa and Odin Sphere. In Muramasa, you will find many humble roadside dining establishments all across glorious Nippon. Here you will gain more substantial quantities of Spirit from food for what is honestly damn steal compared to some of the snacks you pick up from the traveling merchants.

Similar to the merchants, though, they only deal in limited quantities. If you want more, you'll have to go run around Japan and kill enemies for a while -- especially if the restaurant has some really potent Spirit returns. 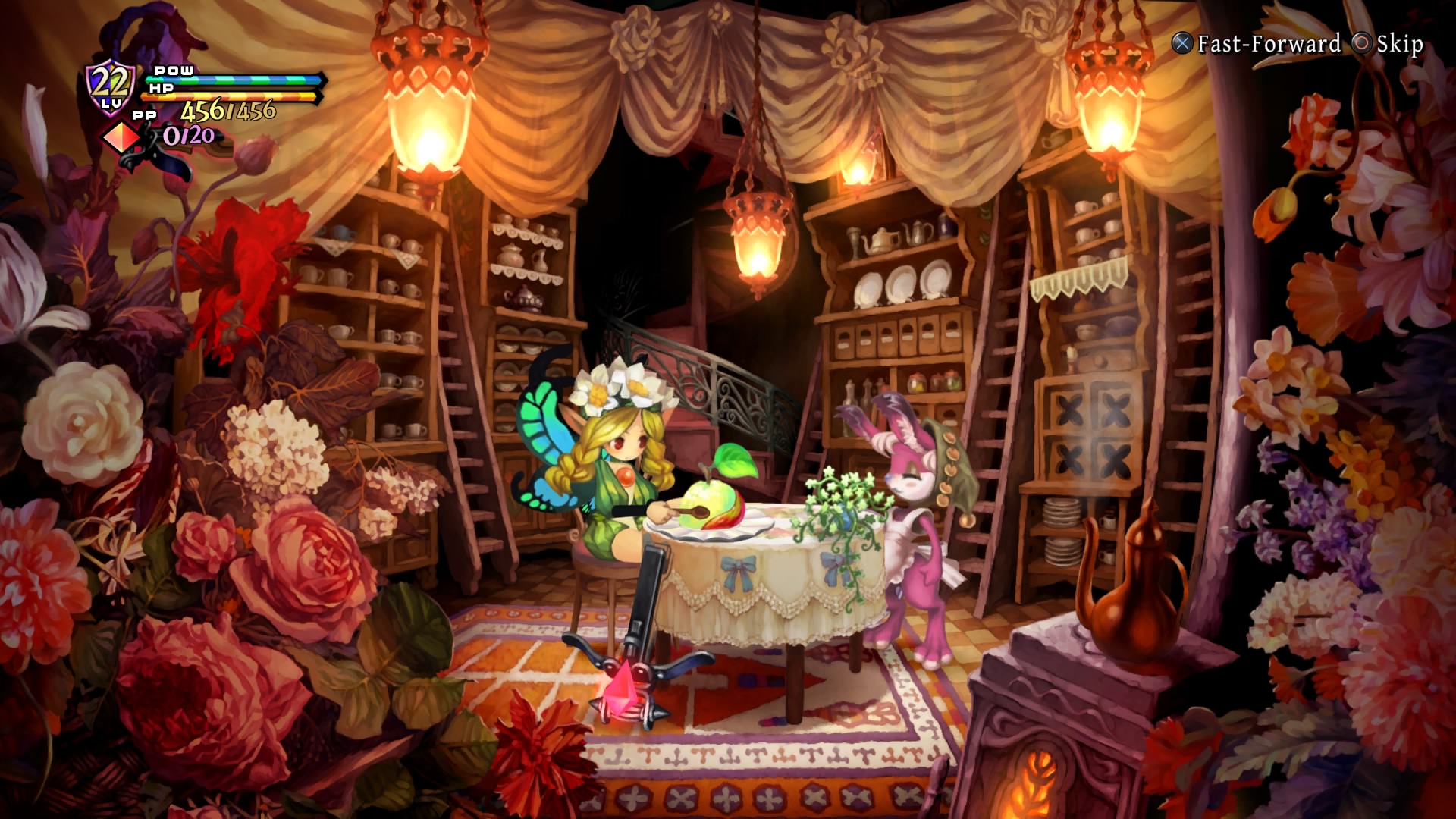 in Odin Sphere, you'll obtain rare Titanian currencies that cannot be spent anywhere else than with the culinarians in the Pooka Village. Again, here you will find more satisfying EXP returns than with fruit and snacks on the field.

Plus, after a day of hard work, it feels good to go out for shushi or churros. And as with munching on the field in Dragon's Crown, here you will see your heroes sit and chow down. Muramasa goes for a more detailed first-person view of scarfing down food in which the finely detailed meal wobbles as its consumed.

Over the course of both Odin Sphere  and Muramasa, you will have the opportunity to collect recipies and ingredients from vendors and for completing various map objectives. And while you might grow some fruit in Odin Sphere, every now and then a random encounter in Muramasa gives you the opportunity to hunt for the meat of pheasants and boars. Various shiny item pickups may also be food to-go or ingredients.

With Odin Sphere, you will hand over the foodstuffs you grow, buy or collect to a traveling Pooka chef known as Maury, who seeks to grow in his craft by seeing the world and discovering new dishes to prepare. Better still, he'll prepare your meals at no added cost.

Not only do these meals yield some of the highest EXP values you can gain from food, if Maury is feeling really inspired, additional EXP is layered into your meals and repeat visits may inspire him to create newer dishes with bigger EXP gains. So long as you have the goods, Maury makes the best meals possible for you. 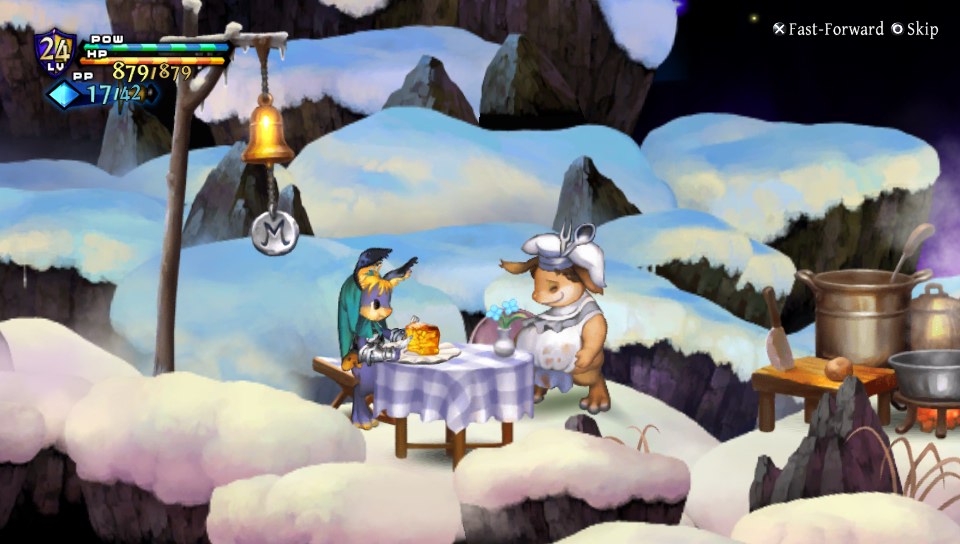 Similarly, in Muramasa, cooking meals on your own with the ingredients and recipies you collect will ultimately grant the greatest amounts of Spirit found in the game, making it much easier to access many of the swords in the game (provided you meet the other boss defear or challege shrine requirements). In my original playthough on the Wii, I neglected to keep up with cooking and found it hard to progress to new swords late in the game for it. I did not make this mistake with the Vita version, nor have I neglected it with Odin Sphere.

And just to go back to Dragon's Crown for a moment, should you set up a camp during your adventures, you can prepare meals that offer various stat boosts that remain in effect for the next quest . Each character has a food preferences as well, but overall this is another concept pulled from Monster Hunter and can be found in many games from Japan today. Still, it's a morale boost and the path to more efficient fighting, higher scores and more level -ups. It's consistent with what we've seen in Odin Sphere and Muramasa, just executed as a stat buff.

So looking back through this, it's almost as if the designers of the game are telling us how they feel about food.  Back on the snacking tier of Muramasa, sake is all well and good but fruit is more fulfilling and it's oranges and peaches that offer the most spirit. In Odin Sphere, growing fruit early on is satisfying, but saving it for larger dishes is even more rewarding.

Eating out is treated as a very satisfying luxury. It's fulfilling in its own way, especially with family and  friends, but not the most rewarding thing.  The most rewarding meal is a meal made by a friend, family or on your own. When you think about your holiday meals with family or that kitchen experiment that went right, it rings true. It does raise spirits and add experience.

That three games from the same studio seem so fixated on the act of eating and tying it so deep to progression, well, it certainly is hard to ignore a set of beliefs guide the mechanics. And, personally, I see progression by eating as more of a break from the rest of these games than a grind because, well, it''s how I see food. Eating is taking a break.

All this makes me curious to know what goes on at Vanillaware during lunch, to say the least. I'm suddenly imagining people having potlucks and eating incredibly well there. And I see bowls full of oranges and peaches. And fairies bathing in wine.

Also, are you hungry yet?