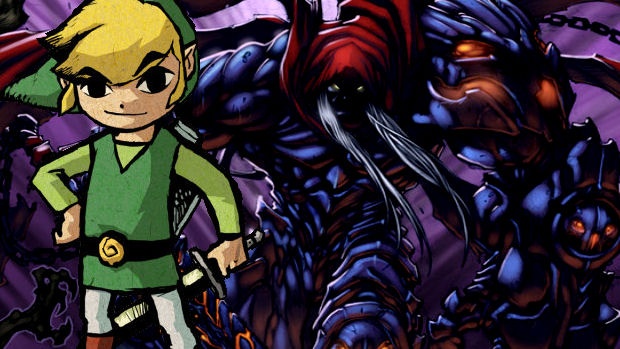 Odin Sphere is a 2D action adventure game that was originally released on PS2 in 2007. It follows the unique stories of five different playable characters and is hand drawn in the customary luscious style of its developer Vanillaware. I played the original briefly all those years ago and really fell in love with the beautiful sprites and engaging combat. For one reason or another, however, I never finished the game completely, so when I heard of the Leifthrasir remaster for Vita and PS4 I knew I’d have to have it!

The five different stories follow a group of warriors as they battle their way towards different end goals using powerful weapons called Psyphers. Similar themes are present in the five different stories: friendship, betrayal, overcoming self-doubt, and, most evidently, love. Gwendolyn, for example, seeks the attention of her father but no matter what she does he never appreciates her the way she desires. Cornelius is cursed by an unknown party, transformed into a beastly Pooka and cast out of his kingdom; he must fight his way back to his rightful place against all odds. Mercedes’ mother is slain in battle and, unready, she must take her place as Queen and fight to save her kingdom against treachery and aggressive onslaught from neighbouring tribes. All the stories intertwine to some extent and the differing viewpoints offer an interesting insight into what lies behind the protagonist’s and antagonist’s motives.

The sphere in the title of the game relates to the stages in which most of the game’s battles take place. Instead of being linear, most parts of the map loop back on one another in a spherical fashion. This makes the battles more intense as there is only a certain amount of distance that can be put between the player and the foes they are facing – this plays an important role in weighing up critical choices as things like eating food to regain lost health take time and can lead to the player being wiped out if too little distance is put between them and the enemy. Regular linear sections are mixed in amongst these spherical stages, many of them acting as rest areas where the player can buy items and equipment from travelling pedlars and bolster health and levels by providing ingredients to the chef at Maury’s Kitchen.

Characters can be developed and toughened up in a number of ways. As the warriors fight their way through the onslaught of tribulations they face, they can level up their weapons using Phozons which are released upon defeating enemies and from certain plants and butterflies that can be found hidden with stages. Each character’s level can also be upgraded by killing foes and eating food items either bought from shops, cultivated from seeds found in chests, or by accessing the numerous kitchens available in the game. Rare Phozon Prisms can be obtained from especially difficult battles or from well-hidden chests and are used to unlock powerful attacks and supporting abilities to help you overcome the many seemingly insurmountable encounters. With each acquired level up, skill level orbs are given to the player and can be used to enable additional supporting abilities which lend latent assistance such as additional EXP from food, protection against status effects and an increased possibility of dizzying enemies.

Special attacks consume either PP or POW. POW is a bar that sits above your health and steadily recovers itself over time. PP is much harder to recover and can only be refilled by collecting the floating phozons dropped by downed enemies. Abilities that use PP and POW must be used tactically as spamming a move continuously will expend the available energy very quickly and leave the player vulnerable to attack, especially during boss fights. Equipment can be worn which lessens the speed in which these powers are consumed but they only prolong the inevitable by a moment or two longer.

The game contains the PS2 original and a modern, ‘refined’ version on one cart. Although both games boast the exact same retouched HD sprites, there are differences between the two versions in the gameplay department. Some of these changes are subtle, some less so. In the PS2 original, for example, phozons would not be automatically absorbed and treasures dropped by enemies would not open of their own accord and would disappear after a short period of time if not attacked. The grading and combo systems have undergone an overhaul in the ‘refined’ mode that vastly improves the fluidity and functionality of the game. Characters have received additional TLC and now have a range of specialist attacks and support abilities that are relevant to the way they approach combat. If you collect all of the character’s Phozon Prisms you are now able to unlock a devastating ultimate attack which wreaks havoc on the battlefield and looks damned pretty into the bargain. Upon completion, new modes and boss rush options become available that were absent in the PS2 release and trophy support has been implemented. Of course, purists can ignore these changes if they like and stick with the original imagining of the game but I honestly think these tweaks have improved Odin Sphere and made it more approachable and, most importantly, more enjoyable to play.

The game does have a few issues which are worth noting. Strangely, the game is far harder at the beginning than it is in its latter stages. I’m not sure if this is down to developing a mastery of the game’s mechanics and character combos as you play through or if it was an intentional design decision. Whichever it is, I played on hard and found Gwendolyn’s Valkyrie chapter by far the most difficult. That said, I do feel the difficulty of the rerelease has been worked down from the original as I had a much easier time of progressing than I did on the PS2 all those years ago – this can either be seen as a pro or a con depending on which way you look at it as the original was tough as nails!

Upon the completion of each chapter, you unlock a new tome which can be accessed from the attic that serves as the game’s main screen. Each book puts you in control of a completely new character which can be jarring. You can spend hours mastering one character’s move set and levelling up their abilities only to be thrown into the deep end with a completely new character. This can lead to you feeling as though your hard work was for nothing when you have to start completely anew with a fresh and totally undeveloped character at experience level one. The hardest transition is from Cornelius’ chapter to Mercedes’. Mercedes is a ranged attacker working with a bow and her new attacks and the approach one needs to take when using her are vastly different to the two preceding melee characters. Additionally, she must occasionally stand still for a brief moment to reload her bow, something that isn’t explained very clearly in-game and can lead to frustration until properly understood, often by accident. Still, with dedication and a little practice these alternating styles can be mastered and the change in tactics can be seen to freshen things up and break the monotony of button bashing through the entire game with a singular character.

Another slight issue is the repetition you will encounter. From one chapter to the next you will be required to battle the exact same foes and bosses from previous chapters and traverse the same handful of stages many times over. This repetition can take some of the wonder out of the game as facing off against the same attack patterns in the same locales can make it seem as if you are stuck in some sort of loop.

Additionally, when encounters become particularly frantic there can be instances of slowdown. Although I didn’t run across many occurrences of this issue, it does happen, especially on occasions when the screen becomes busy with enemies and items. This was most noticeable for me when activating special attacks against the giant ooze enemy that uses mitosis to replicate itself when damaged.

Overall, however, I found my time with Odin Sphere Leifthrasir to be extremely enjoyable. I have been through a sort of trial separation from gaming over recent months and this game has helped me patch up some of the issues that almost had me filing for divorce. The game is beautifully designed, challenging, and, most importantly, extremely fun. Its nods towards gaming mechanics of yesteryear are welcome, with this gamer at least – there really is no better feeling than the elation of besting a colossal foe having spent a few fruitless battles learning his attack patterns!

Despite Odin Sphere feeling decidedly old school, it came as a breath of fresh air for me amongst the dearth of originality in recent big name releases. Anyone who has a yearning for a tough, 2D beat-em-up should definitely consider picking up Odin Sphere: Leifthrasir. Recommended.

QUICK PROS:
+ Beautiful to look at
+ Many, many hours of game time available
+ Options added to original to increase replayability
+ A great sense of achievement when besting the giant boss battles
+ The refined combat and game mechanics are a joy to behold

QUICK CONS:
- Can be overwhelmingly difficult early on
- Repetition creeps in when redoing stages and fighting the same foes over and over
- Jumping between new characters in each chapter can be frustrating
- Some infrequent but annoying slowdown issues