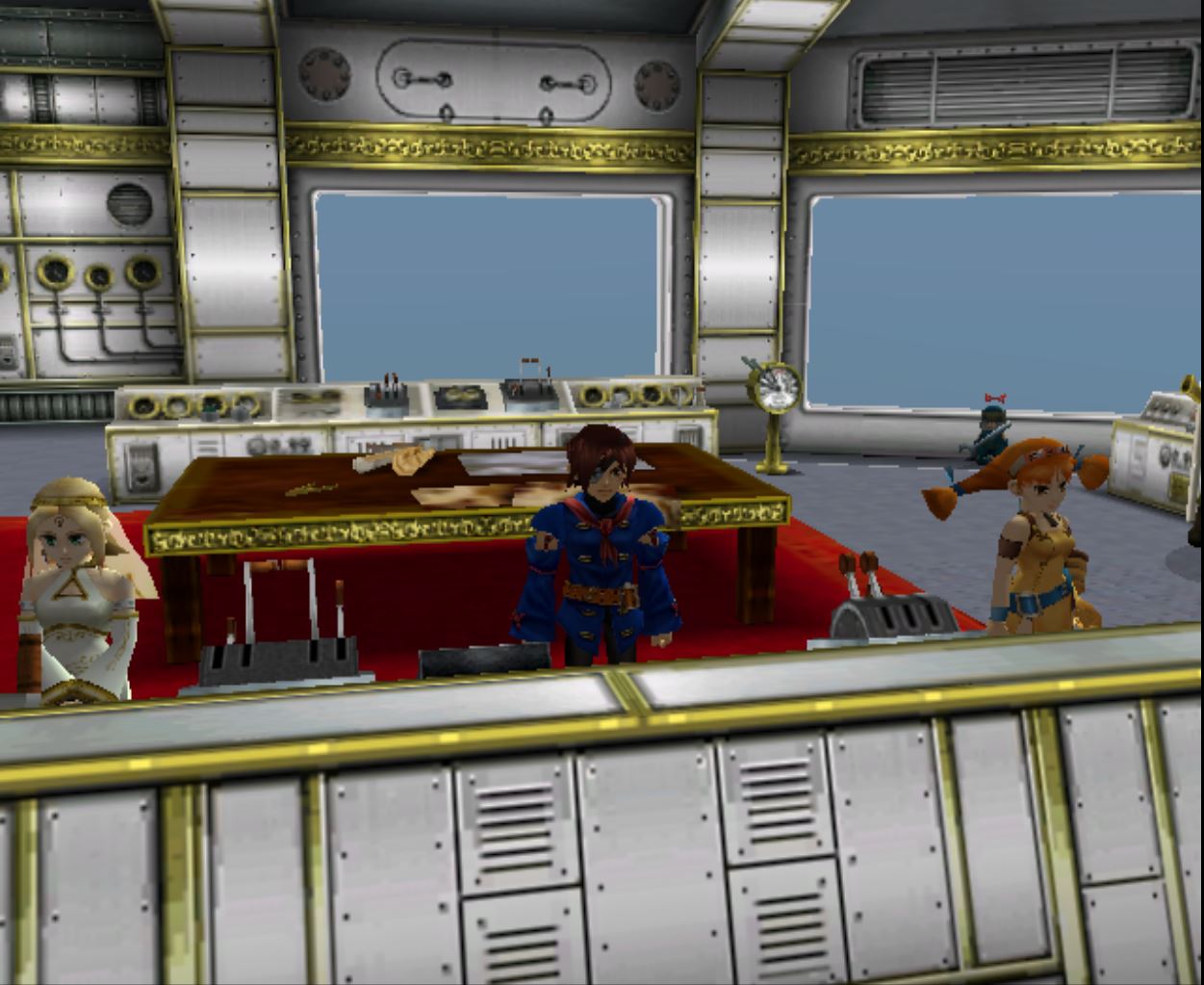 Dtoid ran a story a little while back about a fan-made patch for the GameCube version of Skies of Arcadia, the Dreamcast RPG with the diehard cult following. The Legends version, released some years after the original, added a bunch of sidequests and changed a few other mechanics around to make the experience generally smoother and more robust. But as an unapologetic lover of Skies who has played and replayed the Legends version more times than I can recall, I must admit the game has its share of flaws. If you don't like the world setting, the plot or the characters then I can't really help you, but if you take issue with the magic system and the cost of some Super Moves and the overall challenge of the game, then I can totally sympathize.

Thankfully a lot of these issues were addressed in some way or another by the user Maeson who posted a patch file for the Legends version of the game that can be applied using either a softmodded Wii, Wii U or the PC Dolphin emulator. Initially I was let down by the news because I had tried running this very game on the emulator and the results were pretty poor. Emulation of anything other than SNES-era consoles actually requires pretty beefy CPUs since those original devices could throw all of their CPU's weight behind the game process and not have to split it with something like, oh I dunno, an operating system. 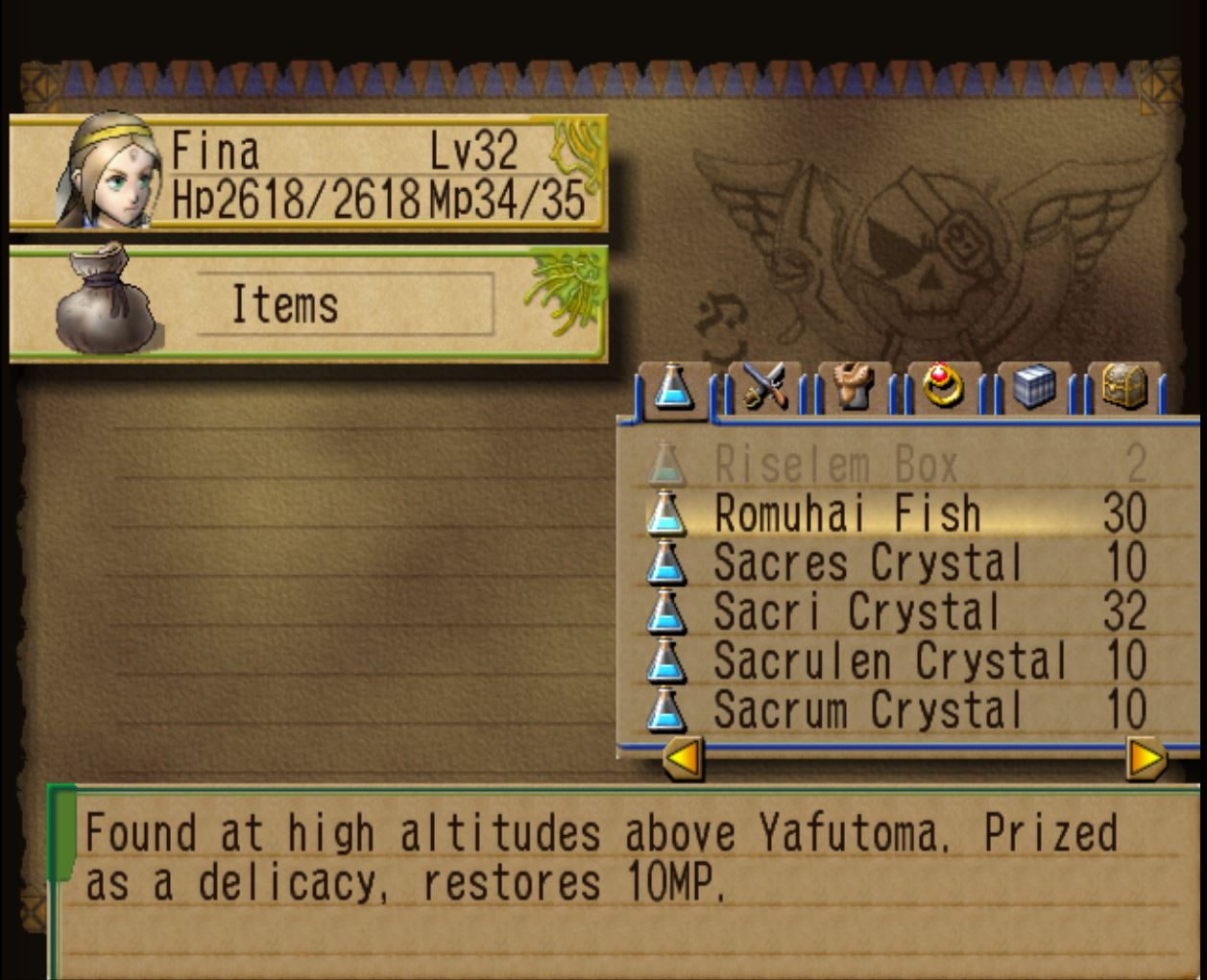 However, the stars would shortly align! Not long after I read the news about the fan patch I also read about a new and more optimized version of Dolphin, version 5.0, and decided to give it another shake. Success! The game ran perfectly on the same system it ran so poorly on just a year earlier (and that was after I fiddled with a bunch of emulation settings). So I immediately followed the simple steps to patch up the iso file (that I ripped from a legit copy of the game like a good boy) and it was smooth sailing for this air pirate! Well, almost. As of this writing, I've gotten through roughly half of the game (up to the Blue Gigas ship battle).

So the original Dtoid references the mod page that also contains the Readme file for all of the changes that Maeson made to this game. Essentially, he beefed up the difficulty and resistances of the enemies while also buffing a lot of the near-useless abilities of your own party, broadening your options for taking down each encounter. The original game starts with an oddly steep difficulty curve until you round the corner and the game becomes a bit of a cake walk. This time around, the difficulty in the beginning is even steeper (I was using up nearly all of my recovery items in every boss fight) and it levels off much less abruptly and still at a decent incline. 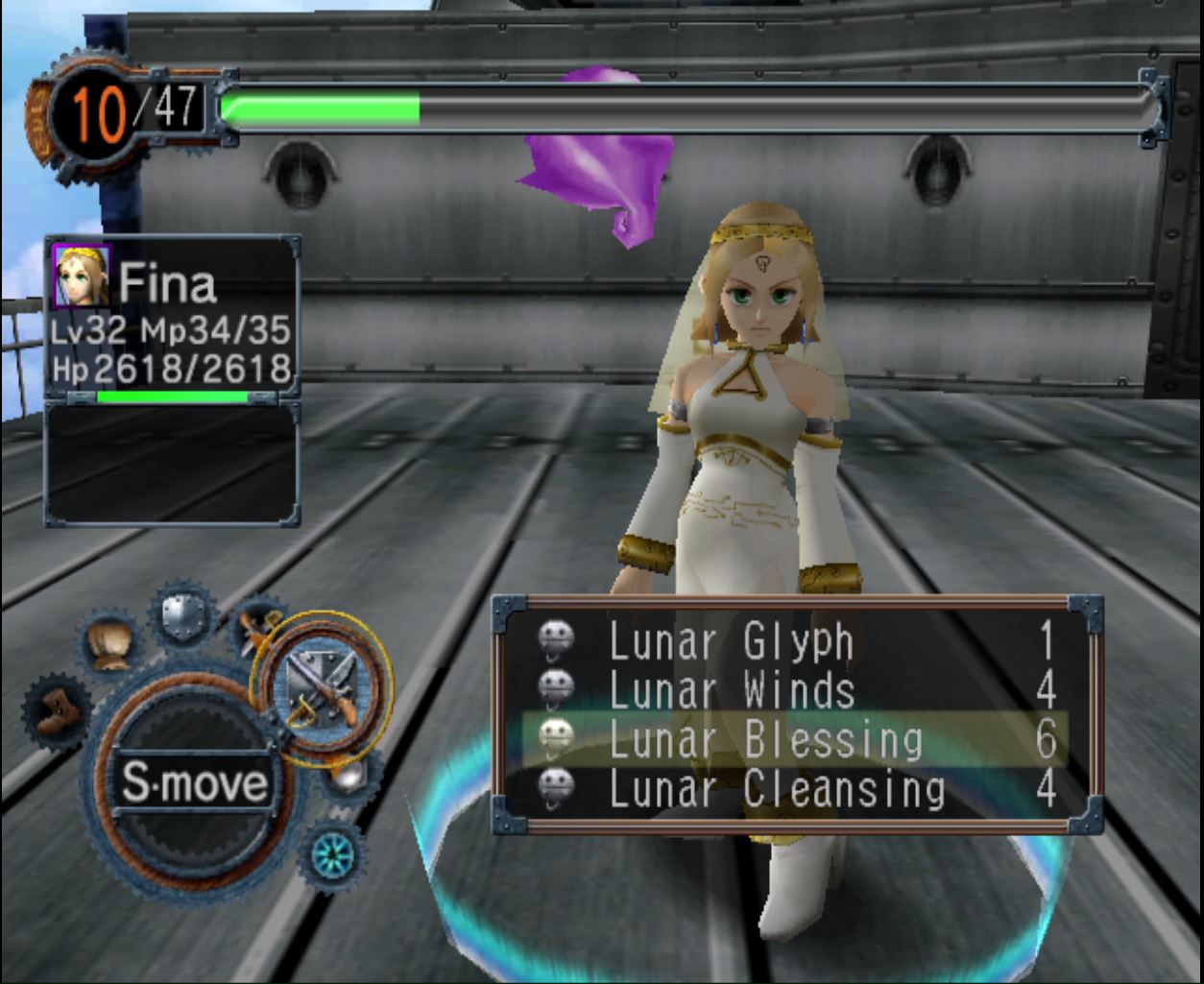 Whereas you could rely on a few key Super Moves from Vyse and Aika (Lambda Burst, Delta Shield, Rain of Swords, Cutlass Fury and a few others) the SP cost of other moves have been reduced so they're much more usefull without having to spend time using Focus to gain enough points. That time would have been better spent using the other moves I listed before, but now you have much more incentive to use things like Lunar Winds and Skull Shield. Maeson has also recalibrated how the magic works in Skies by upping resistences as well as weaknesses to opposing magic elements. The cost of certain magic spells is lowered, magic growths have mostly been increased to hasten your access to better spells, and I believe magic scaling has been increased for certain spells to make them better options over just using an item that would ordinarily do the same thing.

A few other changes were made to the way some spells, items and equipment work to add more functionality and balance to the game. The Skyseer goggles Vyse starts with act like a random encounter reducer (much like the White Map accessory, but less potent), sky fish now have a use as healing items or MP replenishment outside of battle, character restrictions for most accessories have been reduced, and some extra effects have been added to a lot of weapons to make them a little more interesting. It's now worth your time investigating all of your options in a battle rather than going down the very simple min/max route of the original game, and that means you get to see a lot more of the game as it may have been originally intended. 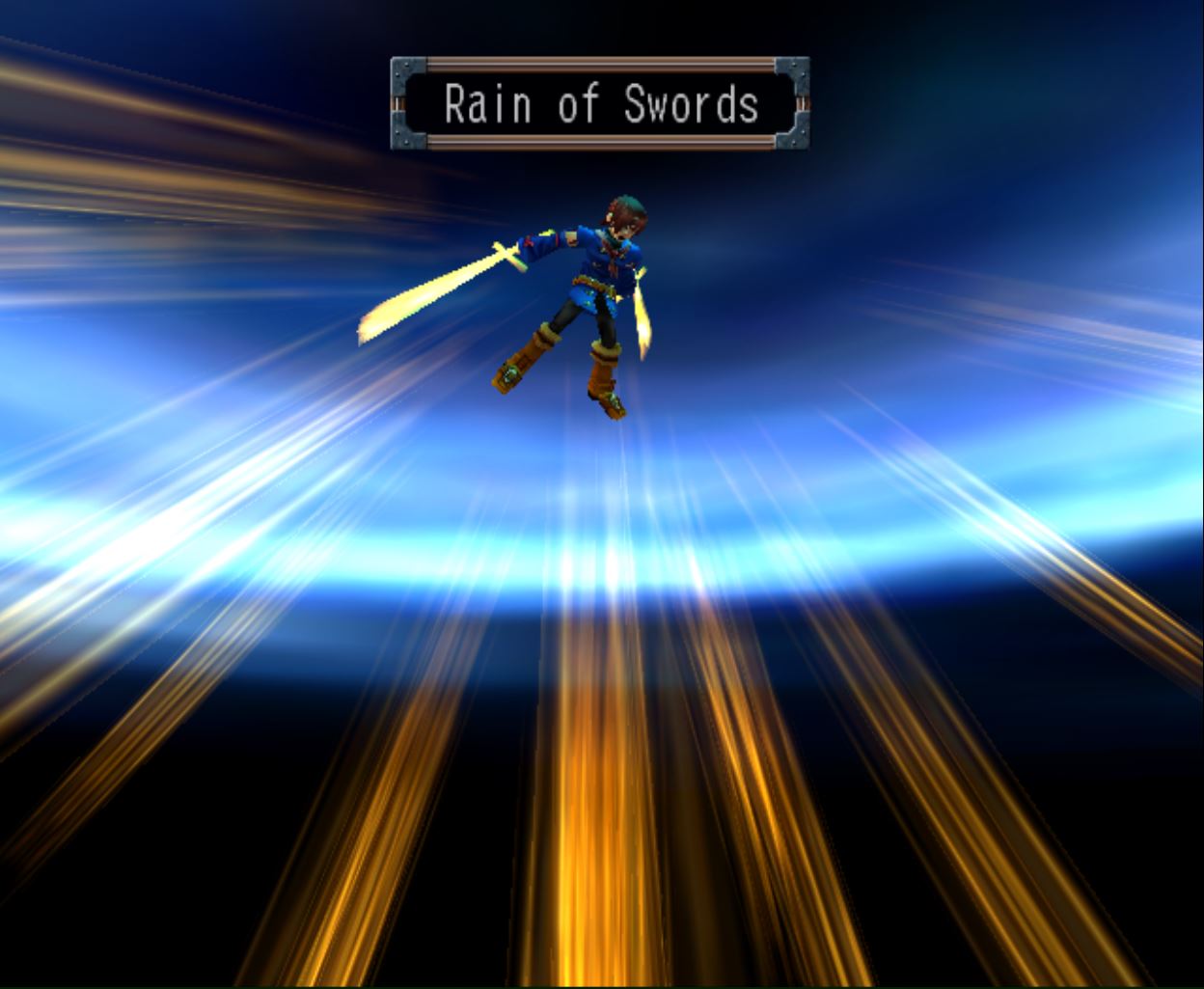 As for the difficulty, most of the normal mobs have gotten a few HP buffs to prevent you from mindlessly wiping every encounter with a field-wide AoE spell but most importantly he's done some clever things to the boss fights. Some bosses with be incredibly resistant to physical attacks, further encouraging use of the game's magic system. Most bosses will be accompanied by one or two additional mobs where previously they were alone (one boss was straight-up multiplied by two!) and the result is surprisingly difficult without being overwhelming. The Executioner boss, for instance, is now accompanied by two spell casters that can heal and buff the boss -- I got through that fight with just Drachma alive, I said "screw the lost experience points, I survived!"

Bosses have also received some substantial buffs to most of their stats, which means they hit like a truck. Expect the more powerful boss attacks to one-shot weaker characters like Aika or Fina if they aren't defending. As a result it is now imperative that you pay attention to the tells built into the original game that would signal when a boss was going to unleash a powerful attack next turn. Previously, you could ignore or heal through those attacks. If you try that now, you'll just end up restarting the fight, I promise. Ship battles, and boss ship battles, haven't been quite as dramatically changed but the adjustments to the magic system carry over. You'll be using Aika and Fina on that Magic Cannon like you've never been using them before since damage scaling has been buffed considerably for things like purple (ice) magic and overall magic spells have been reduced in SP cost. I actually find myself using magic in ship battle to attack more than I do physical attacks, which was never the case before. It's also generally more important to buff yourself properly, in both ground and ship battles, to give yourself what ever edge you can. 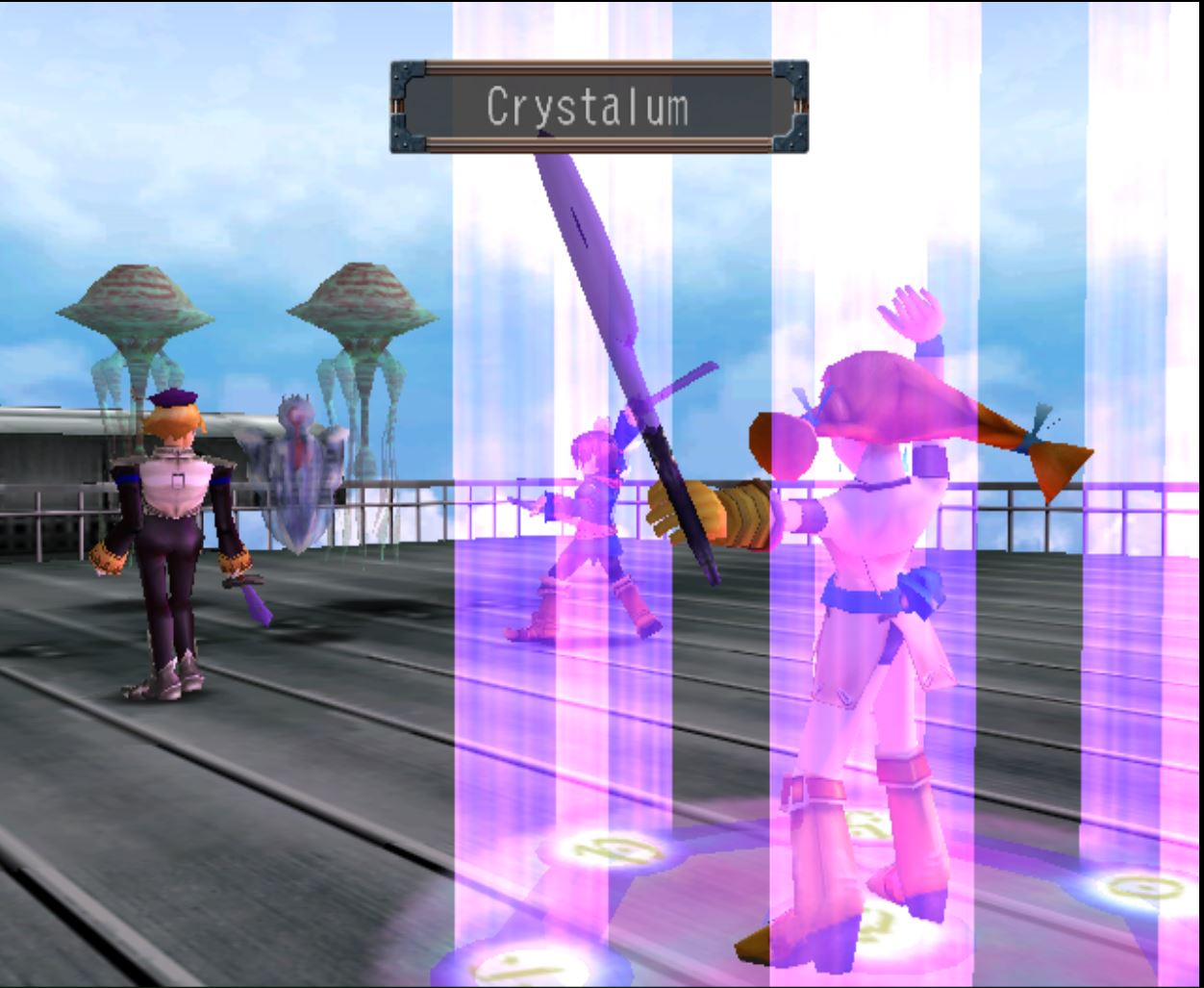 So far, this patch (or mod, if you prefer) has managed to breathe life into a game I once knew backwards and forwards and once played religiously on a yearly basis until I finally got bored of the same old experience. The mod isn't without its flaws, though, and I'd be dishonest if I didn't point some of them out. Aside from a few spelling errors on the revised item descriptions, the patch file I initially used came with a few bugs. Curia crystals seem to be infinite in supply for some reason and the Risan spell was supposed to be modified to work 100% of the time (up from only 50%), however that change doesn't seem to have actually taken effect. It's not a bug, but some sky fish will increase your max MP when consumed outside of battle and they're not exactly difficult to farm. I could have easily given my entire party 99 MP within an hour or so of farming, but I didn't want to ruin the experience.

There was also a game breaking bug with a boss in a later area that may have been a result of the Dolphin emulator, the mod's addition of extra enemies in the encounter, or something else entirely. I was stuck on this until I spoke directly with the mod author who very quickly and kindly offered some advice and even reposted the patch file with that boss fight reverted to its original state. I got around the problem by loading my save with an unpatched iso file, finishing the fight and then continuing afterward with the patched file. At this time I haven't tested Maeson's re-released patch file, but my method should work for anyone else who has encounter the problem since save files are forward and backward compatible with patched and unpatched versions.

At any rate, I'll continue on with the game since I've been having a blast reliving an old classic with a twist. My thanks to the mod author for his time on this patch and his responses to my questions. I'd say give this fan patch a try if you're an old Skies fan like myself!