Here's a fun fact for ya! I'm actually a fairly decent musician. Picked up the piano when I was six, the guitar when I was 14, and even wrote some of my own music every now and then. I don't have as much time to do all that stuff as much now that I'm going back to school for a degree that means something and working as a part-time IT Support Tech, but it's something I still really want to do.

So as you could imagine, I was all over the music-rhythm craze back in the mid-2000s. I was a guitar hero boy for the first few games before switching over to Rock Band. But we’re not talking about those games today. Instead, we’re going to be talking about UbiSoft’s tepid attempt to cash in on the craze: Jam Sessions. The North American commercial for this game was your standard bland video game commercial that most companies use today.

The first commercial shows a young boy’s birthday party. The mother directs a girl over to him so that she could give him a present. The boy thanks her and opens the present, which turns out to be Jam Sessions for the DS. The mother then walks into the room with a cake and singing happy birthday. It’s at this point that the boy turns into the most spoiled little shit I’ve ever seen!

He interrupts her, straight up smacks the cake right out of her hands, and drops F-bombs all over the place! UbiSoft seems to think this is rock star material, punctuating that with a caption that says “Instant Rockstar”, followed by the Jam Sessions box art with sparklers going off on the sides. It’s a very different message than the North American commercial, for sure. But they didn’t stop there!

The second Australian commercial they made featured another kid’s birthday party with his family. It starts out innocent with the kid blowing out the cake, her modestly hot Aunt giving him a present, and him opening it up. His mother whispers to him to thank his Aunt for the nice present. He shows his gratitude by playing a game of Tonsil Hockey with her. He does this for a solid five seconds before his mother pulls him away.

Yup! Not content with promoting temper tantrums and swearing as rock star material, they go with straight up incest. This is punctuated with the “Instant Rockstar” tagline from the previous commercial, ending in the same way. These commercials seem to be less concerned about promoting the game as they are about talking up how awesome John Phillips was. Which, as a reminder, are for a game that's rated E 10+ in North America and G in Australia. Makes you wonder what UbiSoft's Australian marketing department were smoking.

And that’s about it. I know this week’s COMMERCIALISM is kind of a short one, but there’s not really much to talk about here. Just two fucked up commercials for a mediocre music game for kids. What else could I talk about...

Oh yeah! Today's 6/26! Also known as Stitch Day! Also known as the anniversary of the vote to legalize gay marriage in all 50 states! There aren't any commercials for games with prominent LGBT stuff that I can think of, so I guess I'll talk about Stitch, who's one of my favorite Disney characters of all time. Stitch actually got his own game for the PS2 a while back. I never played it, nor am I in any rush to do so, but it did have a pretty neat commercial.

It starts out with a guy watering his lawn when some pet obedience class van hurriedly drives into a neighbor's driveway. After retrieving a dog crate out of the back of his truck, he drops it off on the porch and rings the doorbell. At that point, he just bolts from the house shouting "You're on your own" to the recipient before driving away as fast as he can. The commercial shows said dog crate is completely chained up and snarling on the front porch before cutting to gameplay. Apparently, the obedience class didn't go very well. Someone call Cesar Millian.

That's it for this week. Happy Pride Day, everybody. 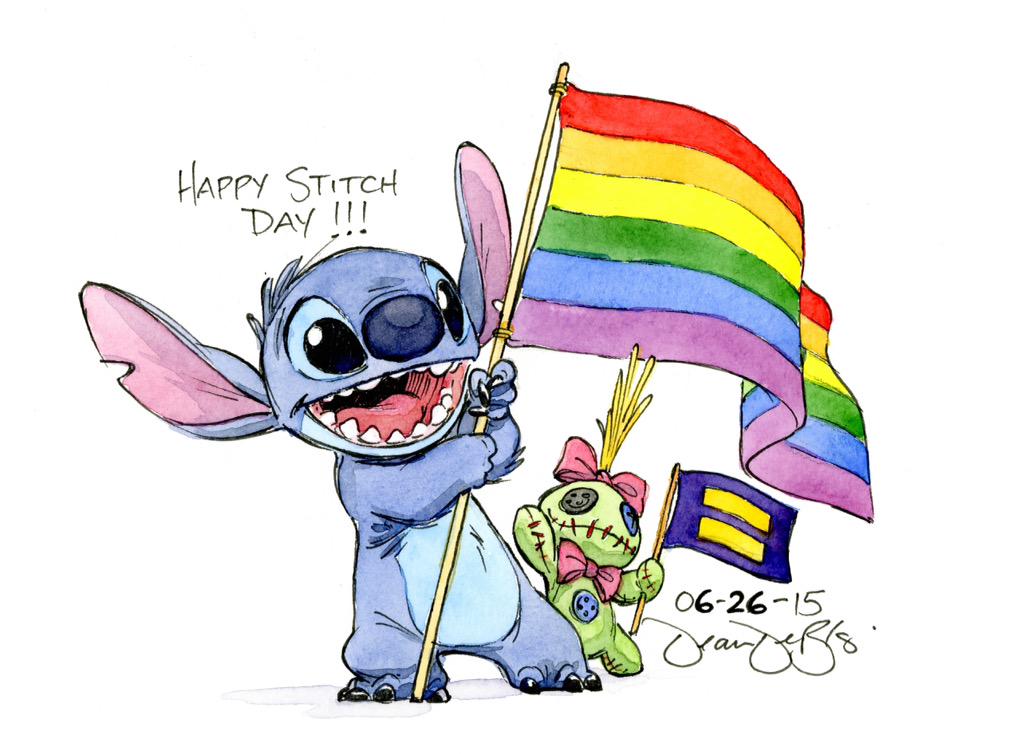