The Wrong Satisfaction of Being Right 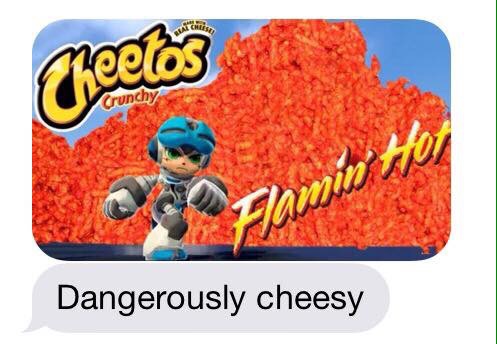 So Mighty No. nein nein nein released recently. Much to the chagrin of fans the game bombed. Frankly for a game that racked in over 3.8 million dollars, MN9 looks like a second year student project. I will disclose however that I have not played the game, and frankly probably never will, so the gameplay could still actually be good, however review scores seem to indicate otherwise at this point. So the game is bad... and I'm happy about this? Everytime I see an article or a post or someone else who shits on the game I become a little happier. Why am I so happy about the failure of a game which would make fans disappointed? Furthermore this is a game I very much wanted to see succeed. Shouldn't I be sad to see how poorly the game is made?

Well it's all about me being right, isn't it? You see early on in the development Comcept and Keiji released a little video. I don't exactly remember when the video was released... in fact it could've been part of the kickstarter campaign. It was to show off some gameplay footage of MN9 and I believe some conceptual ideas. One thing stuck with me though. In the video, Keiji was speaking with an employee who was showing him the gameplay. Keiji said something to the effect of, “Oh a dash? That's a cool feature, that could probably be useful..” At first I thought it may have been staged, like he really knew but this was their weird was of revealing that feature. However it set of red flashing lights in my mind. The way he sad it and the way he continued to act through the video led me to believe... he actually didn't know that was in the game at all. He was being genuine. Which then set off flashing red lights in my head. Later, There was a controversy over some member of the staff, and all the delay just further propitiated my feelings. I began to tell people everywhere that, I had a bad feeling about the game and that it probably won't be good, Though I hope I'm wrong and it's good. However, I think somewhere that latter part of the statement evolved into me processioning ill-wishes upon the game. At some point it was more important to me to be right about this game being bad, than it was to enjoy a good game.

The Human ego is a funny thing, isn't it? I mean, a game I really really wanted to be good had transformed into being a game I really really wanted to be bad. Just so I could be right. Here's a game many people had poured money into believing it would be great. Here's a game that people poured hours and hours into creating fan content even before the game had released; and here I am enjoying it's failure. Revealing in it. I was right, I was right, and you all are fools. You should've believed me!

The wrong satisfaction I had gotten in being right.