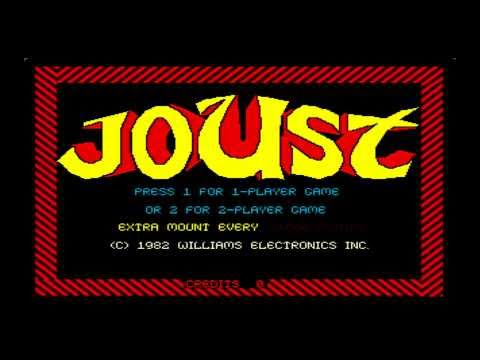 Just as a disclaimer, I’ve never actually played Joust in my life. The closest I think I’ve come to playing it is Balloon Fighter on the NES. It’s kind of like Joust in the same way that Digimon is kind of like Pokemon. It’s on my list of games to try out at some point in the future, for sure. In the meantime, I have these commercials of the Atari 2600 version to enjoy.

What with Atari graphics being what they are, most people had to use their imagination to understand what was going on in the game. Most people would've imagined the protagonist of Adventure being some handsome, muscle-bound hero instead of a block. Fortunately, Atari had thought to make commercials to help fill in some of the blanks. Or, in some cases, just raise more questions. But we’ll get to that.

There were two different commercials for Joust. The first one is your standard early 80s commercial. Well, about as standard as a game involving ostrich jousting can be. It portrays a world that is somehow in the distant past and the distant future. Either the perception of time is irrelevant in this world or this commercial desperately wants to be Star Wars. Joust, this isn’t BioShock Infinite. Just pick a time period!

This commercial actually does the best job of explaining what Joust’s deal is. Evil knights are jousting on large birds over a pool of lava, where being struck turns you into an egg. Obviously, the commercial uses more stylized cartoon graphics to represent this world, while inviting us to experience it from the other side. Naturally, the view from our side of the TV looks completely different to what their side looked like. If Warner Bros. remade Joust today, maybe they could use those 80’s style graphics in the commercial.

It starts out somewhat normally. A dude comes downstairs to the living room and shows his pet bird his copy of Joust. He pops the game in and starts playing, showing us some gameplay footage. For some reason, this causes the bird to start spazzing out. Before we know it, we see two knights on puppet ostriches bursting out of the floorboards.

What follows is a solid minute erratic camera angles showing the knights jousting against each other in the dude’s home, destroying everything in their path as things explode all around them. This includes the pet bird, which is eventually deadified from this insanity. Eventually, one of the knights explodes after being struck, causing the dude to cheer. The other knight then crashes through his window and leaves.

You'd think that'd be where the commercial ends, but there's more! As the dude watches him leave, he spots a large ostrich egg on the floor. He then does what any rational human being would do. He swallows the entire egg whole and starts turning into an ostrich person. I’m sorry, did I say rational? What I meant to say was The-Coroner-From-Jason-Goes-to-Hell levels of batshit. Seriously, this moment blows the rest of the commercial out of the water for how bonkers it is.

Then again, it’d be hard to top swallowing an ostrich egg whole and turning into an ostrich-man.