You didn’t think I’d forget about this little gem, did you? Noooo, I’ve been saving this one for its own COMMERCIALISM. Something this lengthy and…magnificent deserves an entire article dedicated to it.

For those who may not be aware, Nintendo Power used to send out promotional VHS tapes to Nintendo Power subscribers during the Nintendo 64 era. One of those tapes was a promotional video for the then-upcoming Star Fox 64. And boy oh boy, is this video a treat. It’s got everything you could possibly want from an old school video game advertisement: hammy acting, a silly plot, gameplay clips, dissing the competition, and more. All this ad needed were Star Fox puppets and it would’ve been absolutely perfect.

Let’s not waste any more time! Today, I present to you the Star Fox 64 VHS ad from Nintendo Power.

We open up with a pilot parachuting into work at the Nintendo of America offices, which I’m sure is how all Nintendo employees get to work every day. But unbeknownst to him, Sony and SEGA goons are watching him with a nefarious plan in mind. After alerting SEGA about the arrival of the Nintendo employee, Sony jumps out of their van for ”diaper service”…whatever that’s supposed to be, and distracts the Nintendo employee long enough for SEGA to knock him out. After a big evil laugh, they bring the Nintendo employee back to their hideout for an interrogation.

Sony and SEGA want to know more about the competition’s upcoming games for the Nintendo 64. Specifically, they want to know about Star Fox 64. The Nintendo employee isn’t going to budge that easily though, so Sony and SEGA show him what will happen if he keeps silent. They pull a sheet off of a Mario doll’s head in a vice and proceed to squeeze it, which causes untold amounts of panic in the Nintendo employee. What would Nintendo do without their stagnant, trite cash cow?

Alas, this is enough to get the Nintendo employee to start talking about the new, “highly advanced combat game” for the Nintendo 64. After explaining the story to the goons, they ask what kind of vehicles they drive, assuming that they just have some “beat up B-52”. This leads into the Nintendo employee talking about the vehicles in the game; the Arwing, the Landmaster, and the Blue Marine. This, combined with the chatter in the game, is enough to leave the goons floored with how cool it is.

But the Nintendo employee taunts that they only know half of what makes this game amazing. He’s not telling them what, because his employer Bob would not be happy if he did. So Sony and SEGA decide to kidnap Bob and make him spill the beans. They do this by masquerading as pizza delivery boys, using the pizza box to spray Bob with a knockout gas. With another evil laugh, they bring Bob back to their hideout, with the Nintendo employee, who we now know is named Peter, sitting on a couch munching on some pizza. Why exactly Sony and SEGA decided to untie the Nintendo employee and give him pizza is beyond me, but whatever.

The goons demand that he start talking about the Rumble Pak, which Bob accidentally mentions to Peter. Like Peter, Bob refuses at first. This prompts Sony and SEGA to torture the Mario doll once again, this time by hooking it up to a car battery and electrocuting it, laughing maniacally at the doll’s unnatural spasms while Bob cries out to make it stop. He eventually relents and reveals the Rumble Pak, a device that’s designed to let players “feel the game”. Sony and SEGA are pretty skeptical of Bob’s claim, so they hook the Rumble Pak into the N64 controller and start playing the game to find out for themselves. Sure enough, the Rumble Pak’s various vibration settings are enough to impress Sony and SEGA.

After being amazed by this new technology, Peter challenges the two to a multiplayer match. The video then cuts to all four of them on the couch playing Vs. mode together. The goons ask if you can play this amazing game on the SEGA Saturn or the PlayStation. “Nope! Only on Nintendo 64!” Bob brags that Star Fox 64 is only one of the cool new games coming out for the system, which leads into a short montage of additional games in development. This includes Goldeneye, Yoshi’s Island 64, which was later known as Yoshi’s Story, Mischief Makers, and the next Legend of Zelda game, which was called Zelda 64 at the time. 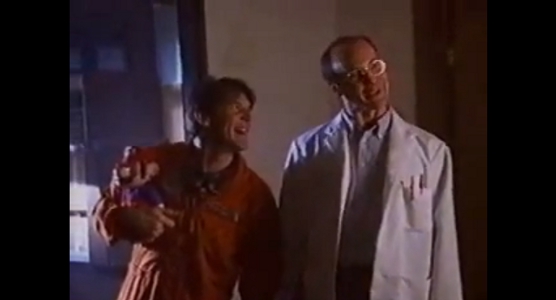 This leaves Sony and SEGA in a slump. There’s no way SEGA was going to beat Nintendo’s rock-solid line-up. And what about Sony? What games did they have on their system that could possibly beat Nintendo’s line up? Before Peter and Bob leave, they show off one last thing: the Star Fox 64 Player’s Guide, which had all the tips and tricks to mastering the game. Sony tries to take a look at it before Bob yanks it away, telling them to just buy it at the store. As they leave, Peter and Bob have a nice laugh of their own, taunting the embarrassed goons on their way out.

This promotional advertisement is everything I love about retro video game commercials, and then some. It’s one of the corniest, silliest ads I’ve ever seen for a game, and I love it. It has Nintendo making playful jabs at the competition, idolizing their latest game as the Second Coming, and it has a bunch of people hilariously overacting to everything. Most importantly, it has a Mario doll getting tortured in cartoonishly violent ways, which I will never not find amusing.

And thus ends our coverage of the Star Fox commercials for now. I can't keep dwelling on one of my favorite properties like this. Not when there's a wide, wide world of wild and crazy commercials out there. This bizarre odyssey is FAR from over...