Avatar: The Last Airbender VS The Legend of Korra

Ok I know it is silly to talk about a show that came out over ten years ago, but come on this one is a classic. I have been thinking about what to do for my next blog so I thought I would start off with something that I know very well. I am a very big fan of Avatar: The Last Airbender. I watched the first episode the night it aired. My family had just moved into our new house, my little brother and I found the tv and set it all up, got some bean bag chairs and some snacks and watched the pilot episode of Avatar. It was awesome. Each week it became a ritual for my brother and I to watch the new episode of Avatar. So naturally when Avatar was over and a couple of years later when Legend of Korra came out I had to see what it was all about. I was not as impressed by it as I thought I would be. 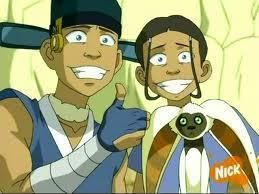 First off Avatar is a classic coming of age story. Aang runs away from his problems but finds a great group of friends to help him along the way. He finally figures out who he is and ends the war. All the characters in Avatar have great depth to them. You really get to know and love them. Sokka and Katara are probably my two favorite characters in the whole series. Sokka is super sarcastic. While Katara is very loving and motherly. Sokka shows you throughout the show that you don't have to have special powers or ablities to help when in a fight. You can just be you and that is enough. Katara teaches you that you don't ever have to be alone in a fight, it is ok to ask for help. I love that each character does a little bit of personal growth throughout the show, and teaches the watcher a small lesson. It gives kids something to look up to and strive for. I also enjoy how the show has one main point, end the war by killing the Firelord. Boom. That is it. Yes they have little problems along the way, or they have random episode that don't have a lot to do with ending the war or helping Aang learn all the elements but for the most part each episode, each season is about the bigger picture. Defeat the Firelord. Now Legend of Korra on the other hand was good but not as good. (in my opinion) Yes it is cool to have a female Avatar be the main character, but if the show isn't has good is it really worth saying that having a female avatar was cool. Yes Korra did have some personal growth, like Aang. She had her struggles and had to keep the peace. But I think the writers knew they were going to have a pretty big fan base when starting this show so they tried to go too big too fast. Each season of Korra had a new BIG BAD threat that she had to deal with. First is was the bending revolution with Amon. Then it was her uncle trying to take over the spirit world. Which that season was cool. It was nice to learn more about the spirit world and the first ever avatar. (they should have started with this season and not done the bending revolution) Then season three we learn about this secret society called the Red lotus with the leader Zaheer. We also get airbenders back which is pretty cool. Then in the fourth and final season Kuvira tries to take over the Earth kingdom. Each of these plot lines could have been taken and made into their own three season show. Just too much too fast. It is almost like you could have watch any season in any order and not have been that lost as to the storyline because they barely connect with eachother. Korra and her friends don't stay friends throughout the whole series. They lose contact.

Each show did have its high points and memorable moments, but Aang and his group of friends will always have a special place in my heart. I have rewatched the show more times than I can possibly count. On the flipside I have only watch Legend of Korra just once and I don't think I will watch it again. It didn't have enough pull for me to want to rewatch it. 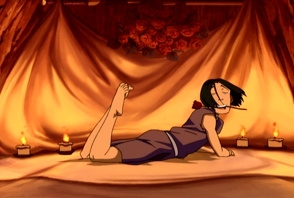 Thanks for reading, hope you enjoyed it! Let me know which show you liked better!! And may you find someone like Sokka to greet you with a flower in their mouth :)