Dark Souls (1) Servers are Back Online! (Mini-blog with Invasion Story)

Yesterday, I jumped back into my second playthrough of Dark Souls. And lo and behold! The world was populated again. Orange messages littered the ground, ranging from useful to “Try Fall.” There were bloodstains that showed the recently dead. And summon signs, both white and gold, that shone so very comfortingly. I could have just made this into a quickpost but something else happened that I wanted to describe.

I got invaded by a supremely incompetent dark spirit.

Just to give some background, I started my second playthrough sometime mid of last week. My first one was Dex based (I don't care what the rest of you say, I loved killing enemies with Iaito). For my second one, I decided to build more Int. It really surprised me how easy that made the game. (I also started with Pyromancy class, and the fireballs made short work of the early bosses.) The worst experience was the Capra Demon because of the cramped quarters and those annoying dogs. But other than him, I was able to defeat all bosses in three tries or fewer. Also, once I was equipped with 3 types of soul arrows, Blighttown was a cake walk (a single death throughout, including boss and Mildred).

Anyway, I had just arrived to Anor Londo and lit the bonfire when I read the news on Destructoid that DS servers were down. So I decided to take a break from it. Then I read yesterday that the servers were back up. Welp, time to jump back in again.

Got past the gargoyles, the stupid knight archers (1 death), go to the inner bonfire. Cleared up the area and opened all the shortcut doors (1 more death :( ). Invaded and defeated Lautrec, which was my primary purpose of coming to Anor Londo.

I took a look around and realized that the ledge might actually be a good place to fight (or duel). So, being a good host, I cleared out other enemies, then took my position by the ledge facing the only direction my invader could come from. 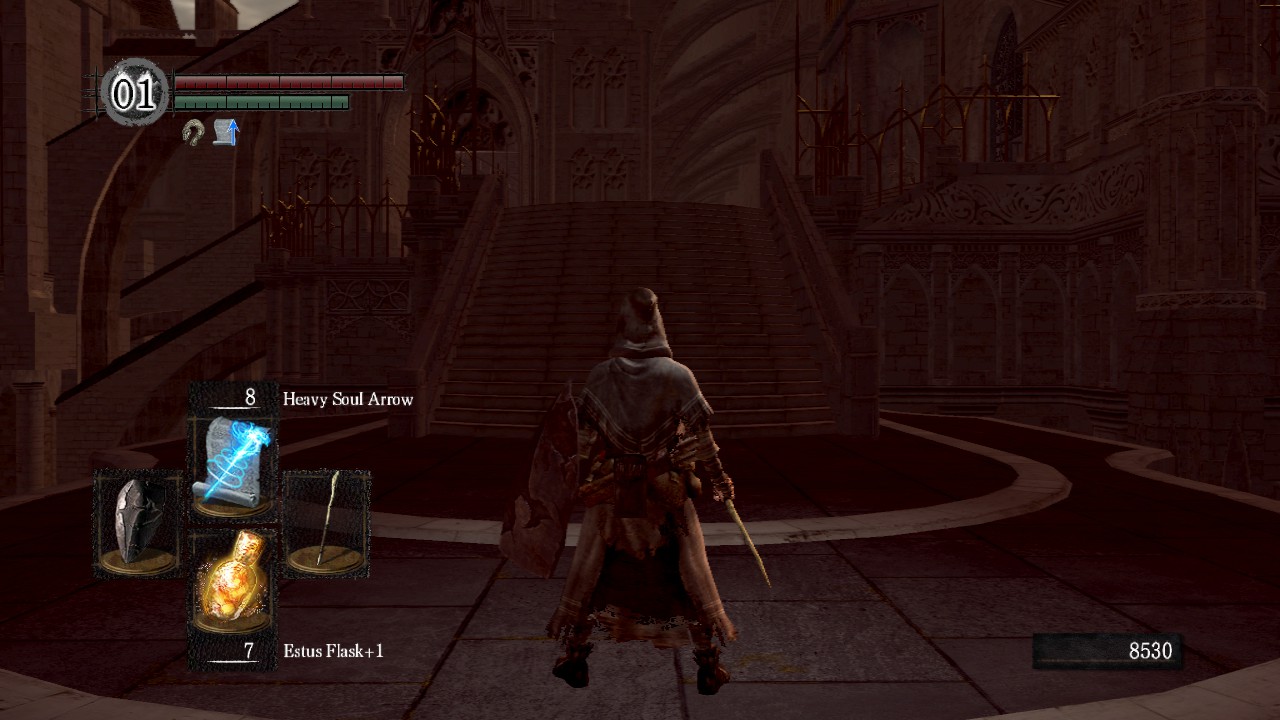 I was fully prepared to die. All my invaders in my first playthrough had killed me. I didn't expect my first invader of this playthrough to be any different. So I stood without moving, trying to look imposing in my starter Pyro armour, a Hollow shield in my left had, and a Sorcerer's Catalyst in my right. 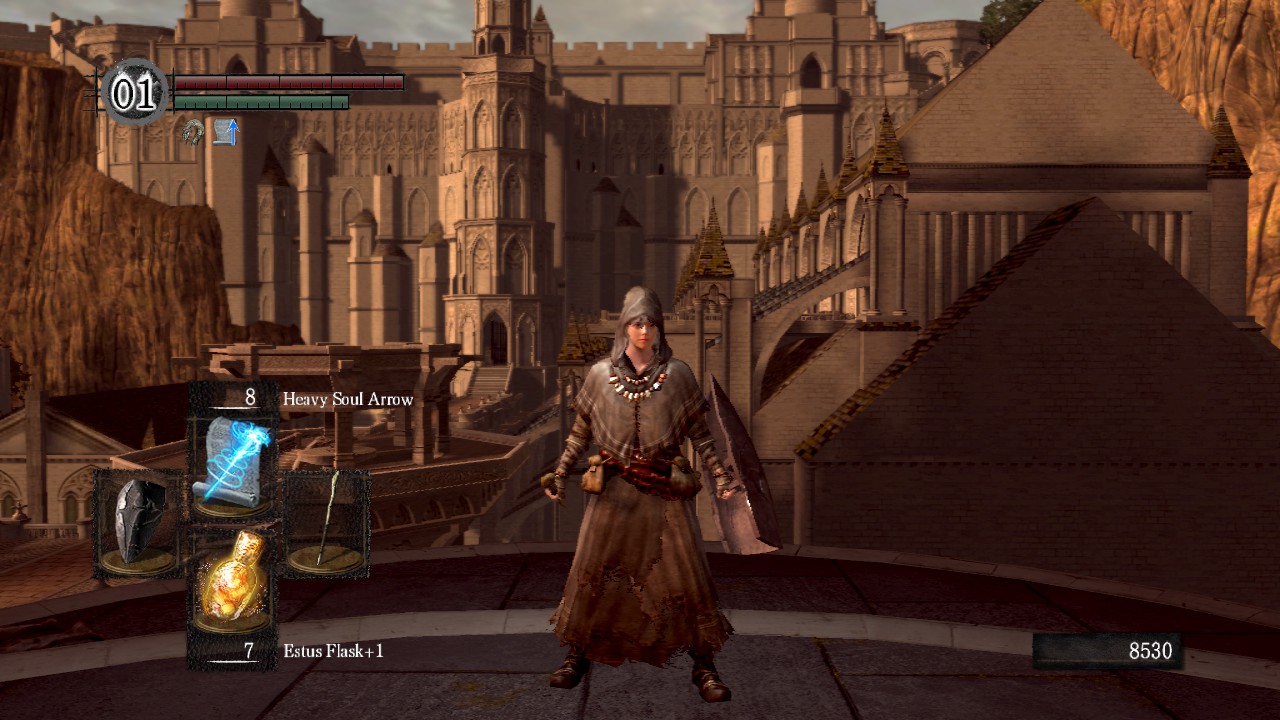 I first caught sight of my poor, bumbling invader as he fell out of a window. Plop! From the broken window atop the boss building, down to the entrance ledge. I saw that fall chunk away 60% of his life. Still, he was far enough away that I figured he would heal up. 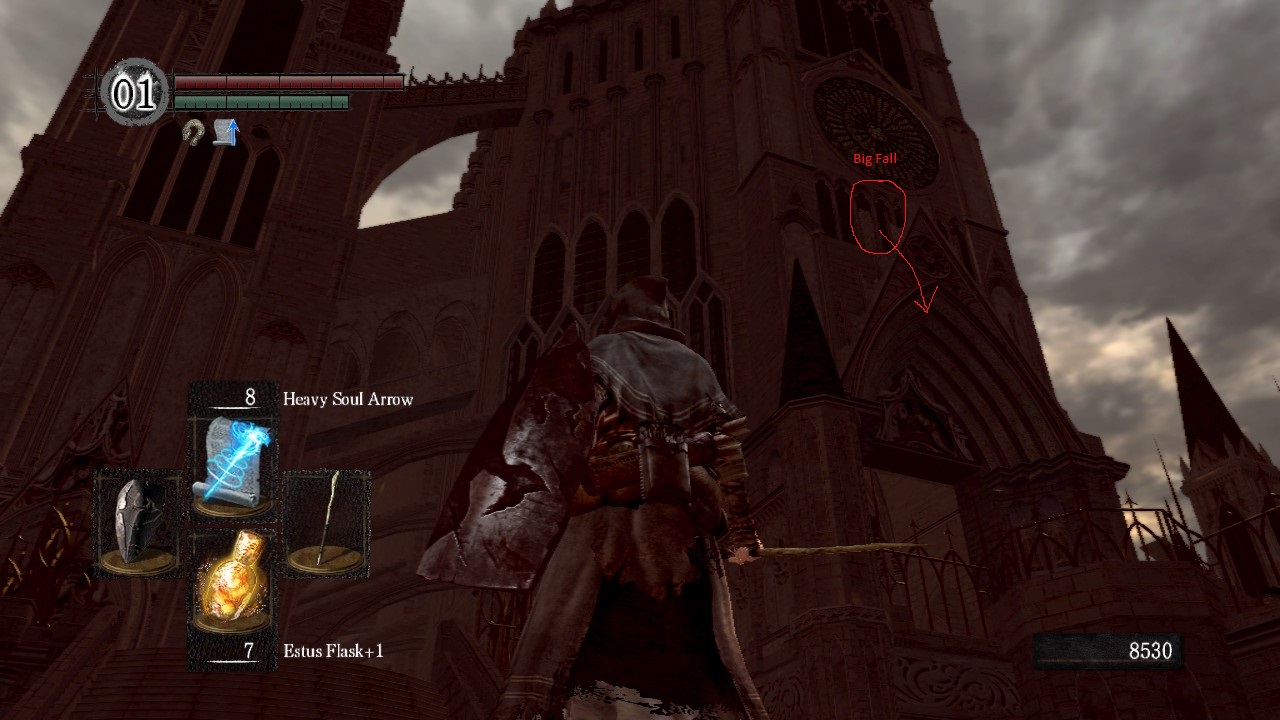 I had the base version of homing soulmass, but I didn't want to cast it in case this invader was a proper duelist. He wasn't. He came rushing towards me with his shield and spear up and immediately went behind me for a backstab. Now I was just as annoyed by his rudeness as I was amused by his incompetence. So I rolled away and cast homing soulmass. The missiles hit him AND KILLED HIM!

Turns out, he hadn't bothered to heal himself up after his fall. So I just shrugged and walked away feeling more smug than I have ever felt in Dark Souls.