So, this week ‘Bamco’ tweeted that there would be exciting Dark Souls related news  going live… then quickly backtracked to quell the tide of excitement over something like a current gen remaster of the original game. No, instead what it turned out to be was some truly abysmal clothing line! These meme-ridden monstrosities are yet another in a long line of f**k-ups regarding the marketing of the ‘Souls games that Bandai Namco have under their publishing wing, and the very fact that the games continue to attract a cult following speaks wonders for the actual videogames themselves; the marketing having much the opposite effect of often making me wish I didn’t like the game so much!! Imagine being a teenager and your parents reveal that they’ve bought you tickets for the hottest new gig in town, a concert that you *know* all your friends are going to, and you *really* want to go to. Then you curl into a ball of embarrassment when you realise that those same parents have also bought tickets and are coming along for the ride. This is Bandai Namco and Dark Souls. 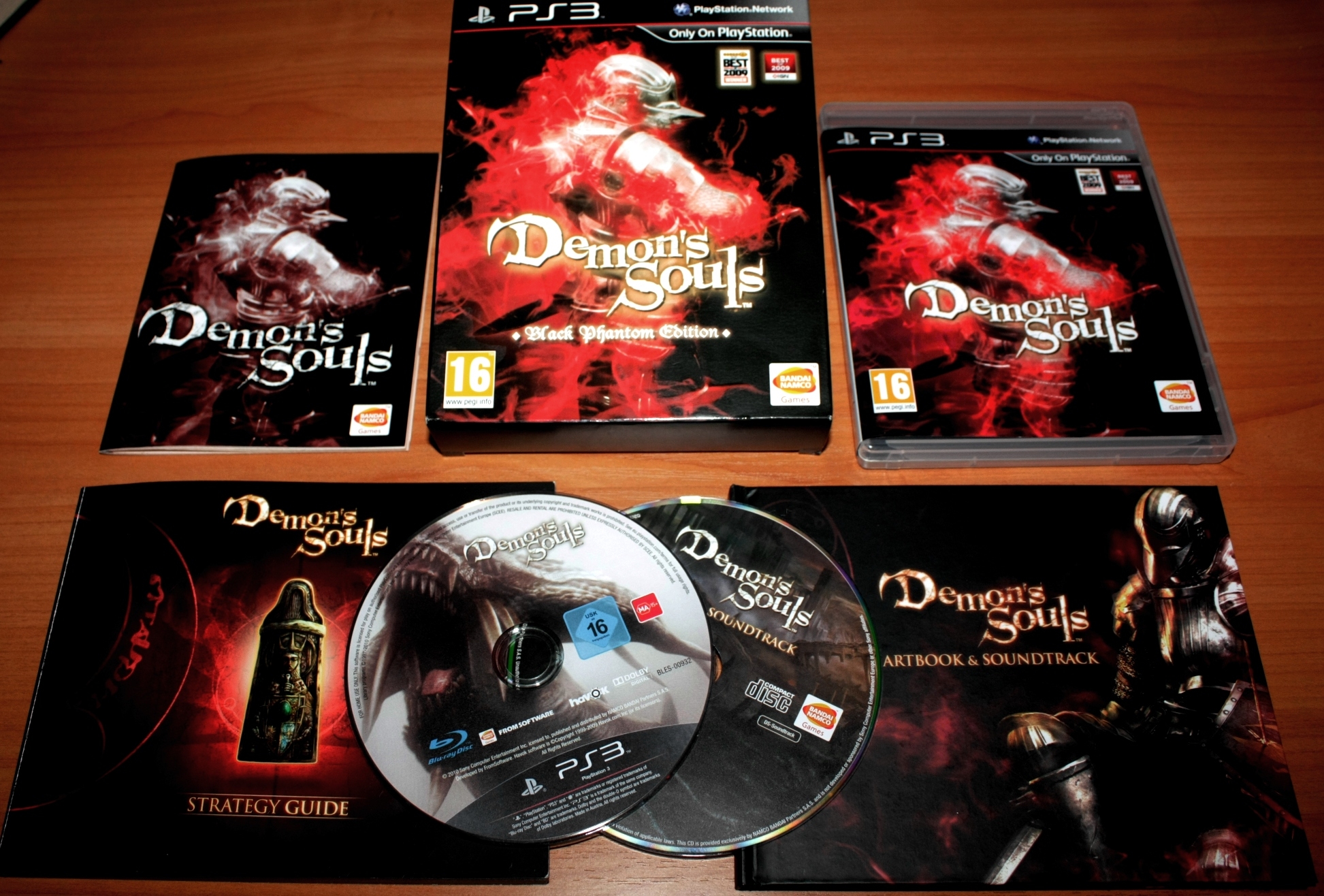 It might not be common knowledge outside of Europe, but ‘Bamco’ started their journey with this franchise when they picked up distribution of Demon’s Souls on PS3. That original entry in the now iconic series was I believe published by Sony in Japan and by Atlus in the United States, but here in the UK it was given a lavish ‘Black Phantom’ edition release, including an artbook, strategy guide (culled from pages on the Wiki), and a soundtrack CD. This was obviously a winner for the publisher as they quickly set about bankrolling and picking up publishing rights for the spiritual successor, the original Dark Souls, and here in the UK this was also given a similar limited edition release, with much the name content as given away previously but also with a “making of” DVD. The thing is, this didn’t actually cost anything extra - *all* the first editions of Dark Souls came with this wealth of physical extras in a fancy box. This marked the last time that Bandai Namco would competently release a game in the ‘Souls series, as from here on out it starts to go downhill.

The first alarm bells started to ring when they called the PC (and subsequent console) re-release the ‘Prepare to Die’ edition, cashing in on the ludicrous catch-phrase they had coined to sell the idea of Dark Souls where the number-one selling point is apparently its difficulty curve. Then they began advertising the games with their own trailers using contemporary music, instead of the subtle and dark ques used by From Software in their own advertising (subscribe to their YouTube channel and you’ll see the difference). When the sequel Dark Souls II started to emerge it came complete with all of the above – cheesy music trailers, bad catch-phrase advertising, etc. Also, there wasn’t a first-print run of limited editions for die-hard fans, instead just a steelbook ‘Black Armour’ edition, and a ridiculously overpriced collector’s edition with a statuette that no one wanted. Dark Souls III has sent this into even more ridiculous territory as there is not one but two collector’s editions, with different statuettes in them, with one being almost twice the price of the other!! Compare this with Sony’s release of Bloodborne, where for a little extra over the barebones retail fans could grab a special edition with artbook, soundtrack, etc.

Then there is the travesty of the Dark Souls III strategy guide. Starting with the original game, and running right through to the Bloodborne ‘Old Hunters’ DLC, strategy guides of impeccable quality have been produced by Future Press. These guides not only contain useful information regarding the enemies, areas, bosses, etc. but also had a lot of good info regarding the lore, interviews and artwork, and were often created with contributions from prominent members of the ‘Souls community (like EpicNameBro). As far as I’m aware, these guides by Future Press have been universally well received by ‘Souls fans, despite the frequent delays in their publication, and they’re definitely among the very best videogame-related books that I own. For the final game in the series ‘Bamco’ decided to s**t on this though and give the guide over to Prima Games, who are *VERY* hit and miss. They’ve already taken a leaf out of the publisher’s book by releasing a super-collector’s version of the guide that retails for around £100, as it contains a replica Estus Flask, and some sort of letter opener – otherwise it’s the same as the hardback edition which is currently £13 on Amazon! Urgh. And now these new t-shirts and hoodies. *shakes head* In an effort to correct the mistakes of Bandai Namco I’m going to present some links below to ‘Souls related things that are awesome and do a much better job of not only providing merchandise for fans but also content that should be appreciated by any ‘Souls aficionado.

‘Crowsmack’ - http://sparklycrow.com/
This is one of the best websites for ‘Souls artwork prints and posters, available direct or through Etsy, they also do t-shirts (available from their website as well as from Redbubble) and various other original merchandise.

InsertCoin - https://www.insertcoinclothing.com/bloodborne/
At the moment, Insert Coin only have Bloodborne merchandise, which is a shame as until now they had also produced Dark Souls clothing that was excellent (such as the hoodie here -https://www.insertcoinclothing.com/hoodies/warrior-of-sunlight.html), so keep an eye on the brand incase you see it pop up again somewhere.

VaatiVidya - https://www.youtube.com/channel/UCe0DNp0mKMqrYVaTundyr9w
In terms of lore and the storytelling of ‘Souls, my personal favourite YouTuber is Vaati. Not only has he made lore videos covering all the videogames thus far, but he also does series exploring  often overlooked incidental detail, and his mesmeric voice is very listenable. DeadEndThrills - http://deadendthrills.com/gallery/?gid=100
For photography from the first Dark Souls, you can’t do much better than the pictures supplied from Dead End Thrills; they exhibit fantastic framing and some beautiful captures of action.

MoonlightButterfly -https://www.youtube.com/channel/UCI_QectaF7CrE7iIzq-7G1g
Ever wanted to watch the ‘Souls games edited into movies that you can sit back and watch? No, well you should! The ‘full movie’ videos by MoonlightButterfly (previously known as SunlightMaggot) are absolutely fantastic at recapping the stories of ‘Souls and lets you hear dialog from characters that you may have missed or never seen.

Videogames have come a long way since the 8-bit and 16-bit days of old, and it is now one of the most interesting and constantly-evolving storytelling mediums. I started blogging about videogames a few years ago because I am very passionate about certain experiences I've had, which I don't think could have existed outside of our unique hobby, and I wanted to share this with other like-minded people on the internet.

I'm based in the UK and my favourite videogame of all time is probably still Shadow of the Colossus, but other more recent games such as the impeccable Dark Souls and Journey have given it a run for its money. My other interests, and things I have blogged extensively about, are board games and Japanese anime. I've got a degree in Media Communications and Film, and I'm currently a Teacher of ICT.

I post fairly regularly on my personal blog at https://n0timportant.blogspot.co.uk/, so please visit there for legacy videogame reviews and articles on anime, boardgames, etc.