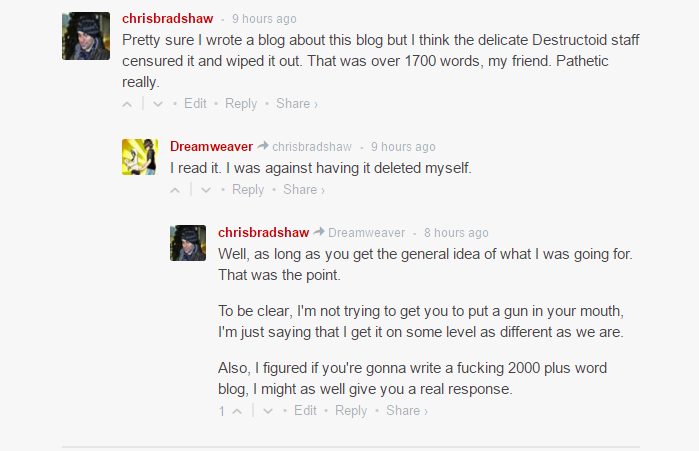 Oh boy, here we go, I can almost hear the mouse clicking and the moderators flying over to this blog for a potential terms violation on my behalf. Don’t worry fellas, everything is under control, put the weapons down nice and easy. No problems over here officer.

Now that they’ve bit addressed, a little context. For those of you who don’t know, yesterday, I managed to write something so controversial (or edgy) that I came face to face with a Terms of Service violation of Destructoid. My goodness, and here I was just running rapid for the last couple weeks. Hell, I didn’t even know this site even had this loosey-goosey constitution of anti-dickery.

Circumstantially my words were taken down. I won’t go into the content of the matter of the blog post and I’m sure I can’t really expand on the sorry state of the logic behind this maneuver as we wouldn’t want ‘to violate the Term of Service of Destructoid. As stipulation ten, paragraph two says, “If you create threads encouraging people to complain about mods or members of staff, they will be removed.”

Alright so I won’t be moving in that particular direction but I’ll definitely push the lines a little bit as usual if you’ll bear with me, (wherever those malleable lines decide they want to be tomorrow.)

Because I wanted talk about the concept of the censorship a little bit and how it’s doing nothing good for our gaming community.

You know, the most significant lessons I’ve ever learnt in life have come from conflicts and pain. I’m not saying it’s comfortable or ideal but they made me mature into a person that has a pretty good grasp on things, even outside of gaming. You take a look around the gaming community and lots of them haven’t even lived outside of their bubbles of anime marathons and their 13 button controllers, so when something in life finally hits them in the form of, I don’t know, relationships, socializing, business, money and a verity of other things, they’re awkward ass is hopeless.

Now, I’m not suggesting I’m any remedy for the latter but I’ll say this, it ain’t gonna get any better if we start censoring controversial speech. I understand speech that goes against illegal activity but I’m writing this blog today to advocate more freedom in people’s opinions.

Folks, to be honest, I wouldn’t be writing shit if I didn’t think in different terms from the status quo. If I felt like what I was saying was more prominent, I wouldn’t even bother having the blog in the first place. That being said, as disagreeable as I am to this community at times, I’m asking people to just have the self-respect to banish me to the ‘failtoid’ section of the blog recaps and call me an, “idiot.” If necessary.

Don’t start censoring my blogs and outright wiping them out. It’s a disservice to free speech and it speaks volume about the community at large. Has Destructoid become a place where it’s become so guarded and sensitive where can’t allow for controversy and bad language? We’re all grownups right? We must have heard worse than me. 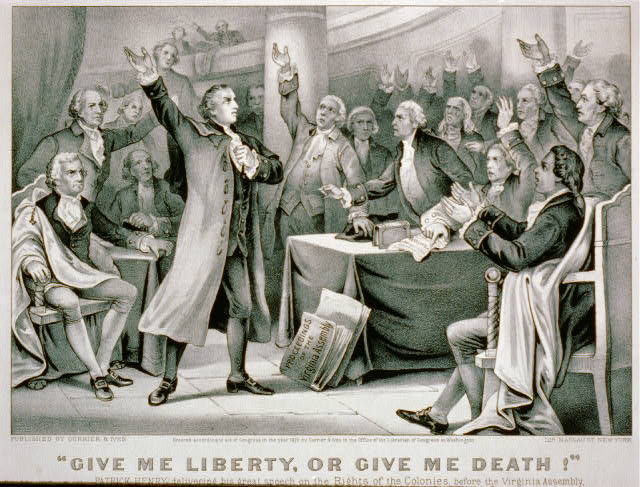 I understand to some extent though that the censorship on Destructoid is means to keep a certain environment, what I’m arguing though, is the case that this logic doesn’t work. The power of speech and communication is founded in our disagreements and our diversity. We don’t have the internet so we can exclusively talk about the weather.

Banning particular sets of subjects of topics or language, I would argue, does a disservice to the gaming community and suggest that the viewership doesn’t have their wits about them to dismiss content they feel disagreeable to them. I get the intention but I don’t think that banning topics that make people feel uneasy has any benefit for the gaming community. It just keeps people typical.

You can say whatever you want about my topics or person but the greater risk, in my view, is having a community without tolerance for attitudes that don’t fall in step with introverts and sensitive people.

It’s just words on a screen from a fellow gamer with an attitude problem, don’t dismiss the totality of who I am because of a disagreeable piece.

We’re all gamers here. Regardless of how at odds I may be with people on this forum, I think that I have something to contribute here but it’s simply not going to be to everyone’s taste, not even to that Terms of Service sometimes either. Censorship doesn’t benefit anyone ultimately and I’m hoping the community at Destructoid can consider this moving forward.