For those confused, I’m just going to do the same thing as for mirror’s edge and take a look at the things known about this hopefully lovely game, and also the things I want and don’t want. So why the this title instead of the generic “what we know”? I just like it better. 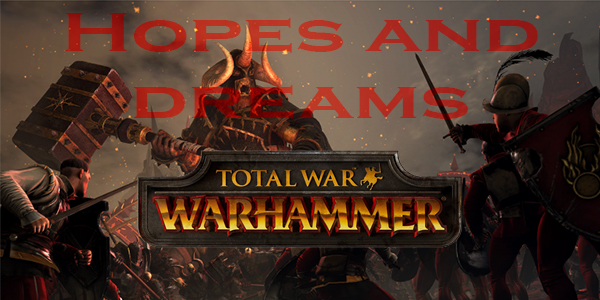 So before we get into discussing the game, I’m going to explain my history with these games, so you can decide for yourself how this may differ my opinion from yours, and of course if I’m just completely biased towards a particular game. So total war. I’ve loved the total war games ever since I played the original Rome. I also extremely enjoyed my time with medieval 2, but I can’t really say the same for the empire and Napoleon total war games, which left a lot the be desired. Then I kind of skipped shogun 2 which I still kind of regret, and played some of Rome 2 at friends’ places but it couldn’t grasp me the way the original did, but was still a good game in its own right.

As for the Warhammer franchise. I sort of got into the 40k side of it after the amazing space marines, and then just kept reading the wiki’s and lore books I borrowed. But as for Warhammer I’ll admit I know absolutely nothing of it, but I see this game as a good chance to maybe get into it.

So total war Warhammer AKA total Warhammer. The first thing I’m most excited for is definetly aerial combat, it’s the first time we’ll see this implemented in a Total War game and I’m really curious to see how they will tackle this. Aside from that we are promised some absolute game changers. We will get SPELLS. Doesn’t sound exiting? Well you’re wrong. Imagine for example to skies opening up and a giant foot of an orc god stomps on the battlefield. Or a shaman creating a moon on the battlefield with its dark energy just killing soldiers left and right. Of course this brings some concerns in terms of balancing, but in an interview with Angry Joe last year the battle designer told us a little more about how they were going to go about it. 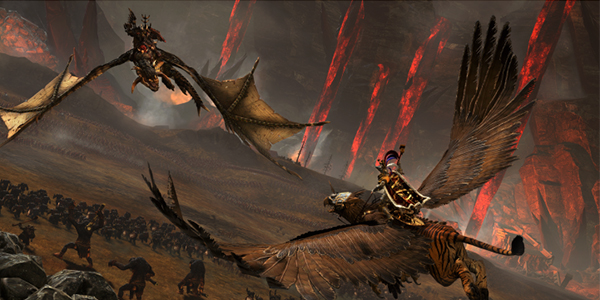 First off, these spells are going to vary based on the locations in which you fight. They implemented a system called “winds of magic” which will affect you’re mana bar. The strength of these winds will vary depending on where you are fighting on the map. This will more than ever give you a reason the pick the places in which you want to make your stand very carefully. Aside from that it will also depending on which faction you fight, for you to either spread out your troops more or form tighter formations varying on what spells they have. So basically if your army is built around the usage of mana you may not be able to use half your troops if you fight in a disadvantageous position. 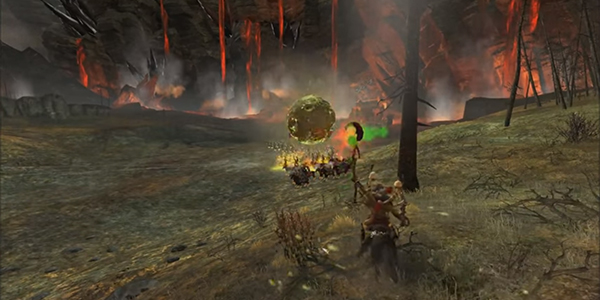 However, as for the multiplayer I’m not too sure how they will handle it there. Will the allow players to choose the strength of the winds of magic? which doesn’t’ seem a great idea. That’s like allowing people in the original Rome to pick maps build around a bridge and then just spam Spartans.

But let’s move on from spells and talk about the units. They really seem to have gone all out here. There are tons of units to choose from but areal and ground units. You’ll encounter tanks, trolls, griffons, your standard infantry, arachnids,… There is definitely a lot to like here. However I’m sort of wondering about the variation in fighting styles between the classes. Because a lot of games seem to handle balancing by just give every class some light units, a couple of heavy hitters some cavalry,… In the end this results in a balanced game, but also results in all classes feeling exactly the same. This is something I’m hoping they will take in to account, and will give every faction its own strengths and weaknesses and deliver a really tactical and dynamic game. 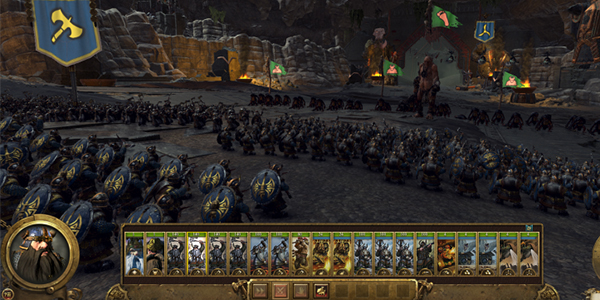 Aside from all the above, we also have to take the state in which they launched Rome 2 into account. That was an absolute mess, ridden with bugs and glitches, several connectivity errors,… Basically everything we’ve come to expect from AAA games at launch.  However when you take a look at the passion these guys radiate when talking about their game I’m willing to put some of that scepticism aside. That’s not to say we should all start pre-ordering the game, but I’m willing to give them the benefit of the doubt.

Now you know my opinion on the game, and I would very much love to hear yours. Do you look forward to it? Will it be terrible or maybe game of the year contender? Feel free to let me know.