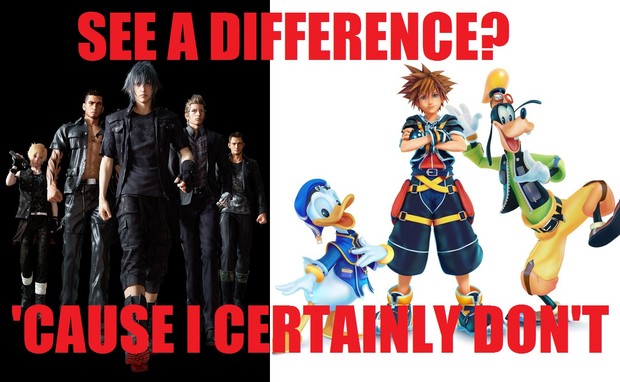 I was about to write a killer blog about the state of RPGs but there’s a couple things that have to be said, folks.  First of all, about Platinum Demo, what the fuck are we playing exactly? Square, have you no shame? I can’t be the only one who thought the whole time, “KINGDOM HEARTS, I’M PLAYING KINGDOM HEARTS.”

I honestly don’t know why I was thinking that it would be anything different, I just did. With the exception of the boss at the very end of the demo, was I the only one that was holding the controller with one hand just smashing the attack button? How convenient, the fuck even MOVES without your guide! Unbelievable. 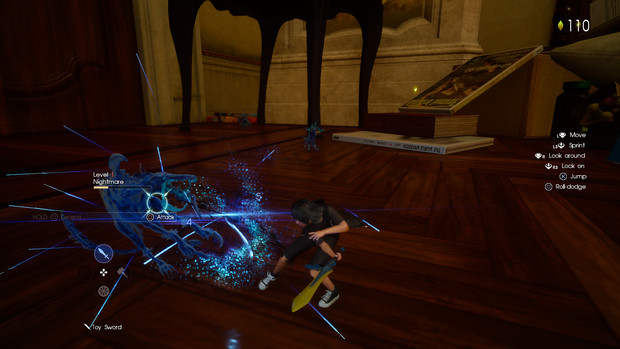 This is what the Square RPG has become ladies and gentlemen. And that’s okay I guess, but boy oh boy, fuck strategy, am I right?

I’m honestly not sure whose fault it is, but all indications point to Kingdom Hearts. Why is God’s name do we elevate this crappy game, Kingdom Hearts, to such a pedestal? So much so, that it sends the signal to Square to let that game’s crappy design bleed over into its core franchise, Final Fantasy.

I’m still convinced that gamers, are so mesmerized by the angst ladened anime or nostalgia ladened Disney broken narrative, so much so, that they cannot see Kingdom Hearts for the crappy franchise it is. Ether that, or gamers have flexible standards or a short memory.

If we can take a step back for a second, and remove the fluff, the angst and the Disney, what are we left with at the core of the game, Kingdom Hearts? Because it seems to me that it’s just a narrow pathway with checkpoints and cut scenes. And when you encounter battles in the games, the fighting is about as sophisticated as it was Platinum Demo. 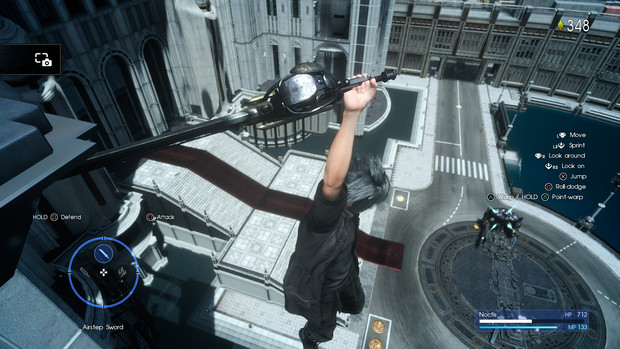 As you can probably tell by now, I’m not a big Kingdom Hearts fan. And if you think I’m bad now, you should have seen me when it was actually happening. “Kingdom Hearts is a terrible game and moves the ball backwards.” I would declare. I still remember sitting on a high school bench with my friends while they were singing the praises of this mess Kingdom Hearts 2. I continued, “This is the end of RPGs as we know it.”

And these geniuses would turn around and say, “What are you talking about Bradshaw, Kingdom Hearts 2 is one of the best RPGs I’ve ever played, and it’s almost as good Final Fantasy 10.”

“No, Final Fantasy IV, Lufia II and Chrono, those are fucking RPGs, not this shit. This is shit is Dynasty Warriors with a Disney plot. You barely even play the game when you think about it!”

Naturally, they blew me off but readers, look where we are now with Final Fantasy 15, what are we playing here? Compare this to Final Fantasy VII even, or even X, it’s not even the same game anymore, not even Final Fantasy. So yeah, like I said, I guess it doesn’t matter but consider this, if this game was called Heavenly Sword it would be a completely different ball game.

I guess it just bothers me mostly that people look at HP, MP, EXP and LVL and immediately categorize it RPG. Because back in my day, there was an association with RPG and it meant strategy. It was the element that derived from the turn based nature inherent in its battle system.

Kingdom Hearts and Final Fantasy 15 might be great games, (not the former in my opinion) but we gotta get rid of that RPG pedestal it’s crowned with because really what we’re playing here is an action adventure at best and a beat’em up a worse, with RPG elements. And guys, if that’s the genre it’s wants to fuck with, then sorry, it’s up against one hell of a competition like… I don’t know… ZELDA. (or Beyond Good and Evil, but that’s a minor detail.)

There’s no way in hell that Xenoblade and Final Fantasy should coexist in the same bracket anymore it just makes no sense. Xenoblade, especially the one on the Wii, was probably one of the best RPGs I’ve ever played. It hit the mark perfectly and while I can look at the footage for the new Final Fantasy and can see the Xenoblade inspiration, trust me folks, not the same animal. If I’m not rocking the menu like a fiend when I get a new loot and readjusting the stats, equipment, ability and perks. It’s no longer an RPG. Like I said, the differential is strategy. When we finally get around to completing FF15 it’s going to be Zelda with poorer level design, less puzzles, and artificially propelled by an angst laden story with some key Boss battle moments, mark my words. This is no Final Fantasy 6.

There’s definitely so much more than needs to be said about the great Kingdom Heart swindle and RPGs in general but we’ll save that for another time. But what I will say is this, RPGs, as it pertains to the mainstream, are a wrap. They simply don’t resonate with the core of the gaming community like they used to. Myself, I’ll always be an RPG fan but it’s clear as shit that Final Fantasy isn’t anymore.

Play the Platinum Demo on PS4 or Xbox One with one hand and tell me what you think in the comments below.