Why I pass on the divisions season pass

So The division has a season pass, because of course it does, well do we get anything else, you ask? Well apparently a good chance of micro transactions. So let’s all take a moment to thank Ubisoft for the extra “options” they provide us with. 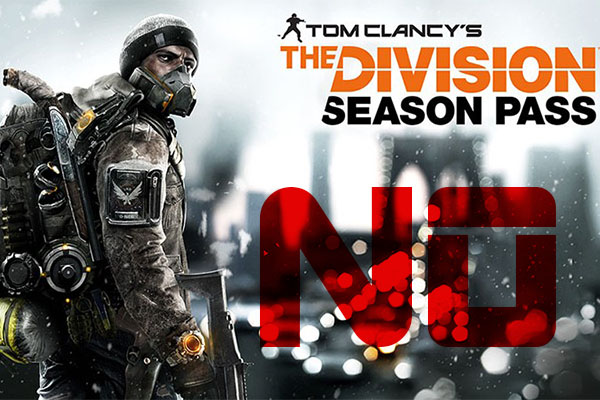 So yes the season pass for the division, now available for 40 dollars on steam. When I say steam I really mean, you can buy it on steam, and then activate it with your Uplay account if you actually want to receive your stuff. Why? Cause f*ck you that’s why. So what do you get for this pass, let’s review shall we? You get a “unique,  powerful sawed-of shotgun on day 1” skins, cosmetics, but also extra in game events that the people who only paid 60$ don’t deserve. Always a smart idea to start carving up your player base as soon as possible,… Aside from the above, you’ll receive 3 future expansions, of which we really don’t know all that much yet.

So yeah, I’m really not sure why this even disappoints me, we all knew it was coming. But there may be even more although I can’t confirm this as of yet. But it’s also possible we’ll get some extra microtransactions cause lord knows we need those as well. At a press event earlier Euro gamer asked them about future plans for microtransactions, and received what may be the dodgiest answer in recent years. "It's definitely just the one - the DLC, I don't know if there's a globally agreed definition of the word microtransactions, but you don't pay to win or advance or anything like that. We have DLC plans - which we're not talking about now - and obviously you'll pay for that, but in addition to that there's no microtransactions, as I define them." Do take not of those last 4 words as they are pretty important. So the only thing I can conclude from this is that you won’t be able to buy power in game, but then what’s the deal with this “unique powerful sawed-of shotgun”, you get with the season pass, One could argue that’s also a form of buying in-game power.

But no worries there is even more. When Eurogamer asked for some clarification of this confusing statement he got the following response. "Magnus's statement is correct, there will be no microtransactions at all. Not even for vanity items. Vanity items will be sold as DLC, through the regular first-party stores." So the only thing I can conclude from tis is that they’re still going to sell cosmetics and all that stuff, but just slap the name DLC on it.  Let me tell you know that you can call it whatever you want but these are microtransactions, and I don’t personally think this is ever acceptable in a full priced release unless you can give me a damn good reason that doesn’t begin and end with “we just want more money”.

So as for the game itself, I have not yet played it myself, although it looks fairly average from what I’ve seen so far. If I do turn out to be completely wrong about any of the statements above please do let me know, or not, it’s your life. But it would be appreciated.

#ThedivisionUbisoftUplay
Login to vote this up!