They Call Me Spooky: Fear the Phantom's Manipulations

Greetings and welcome everyone. Today, for this month's Bloggers Wanted assignment, I wish to share a special game with you. This game is without a shadow of a doubt the most terrifying game ever created. It is a tale of such great horror that you will curse yourself for ever having played it, as you shall never again sleep soundly at night. Indeed, the sheer terror of this game is beyond anything that has been described since the macabre tales of the mad Arab Abdul Alhazred in his damned book.


I must warn you. Under no circumstances must you, dear reader, scroll ahead to the end of this blog. For if you look upon this game without first preparing your mind for what is to come, there is no telling what might happen to you. There are some things that mankind was not meant to know, and even an premature glance at this game could cause one's very soul to crumble to dust.

Heed my warnings. Let us begin.

- You may hold my hand if you're too scared.

In this particular game, the main character is not exactly what one might call...human. While other games put you in the shoes of people trying to get away from ghosts and monsters, this game isn't nearly so kind. This game wants you to feel the horror within your very bones, and it does so by having you play as an indescribable, eldritch, creature. More dead than alive, your character is an wretched amalgam of a ferocious feline and a vengeful spirit of a man, yet not wholly either. To look upon him is to know fear, but I have not even begun to describe the things that he can do.

Not even the main character himself truly understands what he's after, but one thing's for sure; he's got the arsenal to do it. Powers fit for a murderous ghost. The most important of these powers is the ability to possess almost any object and bend it to his will. He does not seem to be able to possess living beings, but who knows...maybe there's something out there, just like him, who does have such power. Even lacking that one particular power, this guy could kill you when you least expect it, in many different ways. He could possess a gun to make it go off in your face, he could possess a wrecking ball to drop it right on top of your skull, he could direct you to a trap door and drop you down a pit, his options are endless. If he sees it, he could use it to kill you. Now, you might think that all you need to do is keep your distance from him. After all, as long as he can't come close to you he's harmless, right? Wrong. There is no escape; this thing can cross the greatest distances in an instant. All he needs is a phone line. You've got your cellphone on you? You're fucked. He'll get you. Even right now, he could be possessing some inconspicuous object right behind you. He could be anywhere. Watching. Waiting. Contemplating your imminent death.

But that's not even the worst of it. The main character of this game has vast power over life, death, and even time itself. 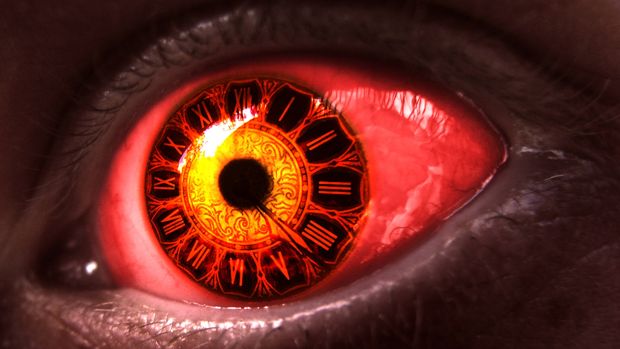 Our 'man's most terrifying power of all is that he can resurrect the dead. Corrupting the very laws of nature, he is able to essentially create zombies from the recently deceased. This blasphemy is not even limited to a single death. Every time his zombie minions die, he can bring them right back. His most prominent follower dies five times over the course of a single night, yet he was able to use his satanic rituals to bring her back every time. It is not just his female minion who meets her demise over the course of this game. In fact, she brings more death than anyone else. Everywhere this undead woman goes, people die. Sometimes by gunfire, sometimes by a freak accident, and sometimes by random heart failure. It's enough to make even Light Yagami cringe in fear. Yet even she is not enough for our demonic main character. At one point in the game, he resurrects a convicted murderer who has just been executed, bending him to his will. After helping the undoubtedly dangerous criminal escape from death row, we now deal with a zombie-convict on the loose. All so the main character can achieve his twisted goals.


It gets worse though. I haven't even told you the most disturbing part about our guy's 'resurrections'. Here it comes: whenever you get resurrected, you retain all your memories of death. That's right; you'll remember dying, going to limbo, meeting him, all of it. That woman I mentioned earlier? Over the course of the game she gets shot with a shotgun, a sniper rifle, a handgun, she gets crushed to death by debris twice, and she can potentially drown. She will carry those memories with her forever. Every second she spent in agony before the cold embrace of death is now deeply engraved in her mind. It is enough to turn you into a whimpering mess, and all because the main character of this game decided to play God with your life. Sickening.

And then it happens. Just when you thought you had everything figured out, just when you thought of a way to escape your horrible fate, our main phantom becomes even more powerful. He gains a mighty undead familiar, a great ballistic hound with powers rivaling his own. Rather than simply manipulating objects, this fearsome beast is able to swap objects of the same shape. Surely you can see the potential for death and destruction here. That toy car your kid just sent flying your way? He could swap it with a real one in a flash, crushing you instantly while leaving the poor driver stranded in the middle of the road.

Combined with the main character's power of manipulation, there is nothing these two cannot do, and they are always on the lookout for your life. Indeed, between the phantom creature and the undead hound, no one is safe.

With that, I have prepared you for the game as best I could. I told you about the abominations in this game, and the horrors they could inflict upon you at their whim. I'm sure that if you're still with me in mind and soul, you'll understand my warnings about the terror of this game.


Now, the time has come for me to reveal to you all the name of this game. Once again, I feel the need to warn you that you look upon the most horrific game in existence, one which may well scar you deep within your very soul. If you think your mind is strong enough to withstand the horrors that are to come, read on.

The title of this, the most spoopiest of spoopy games is...