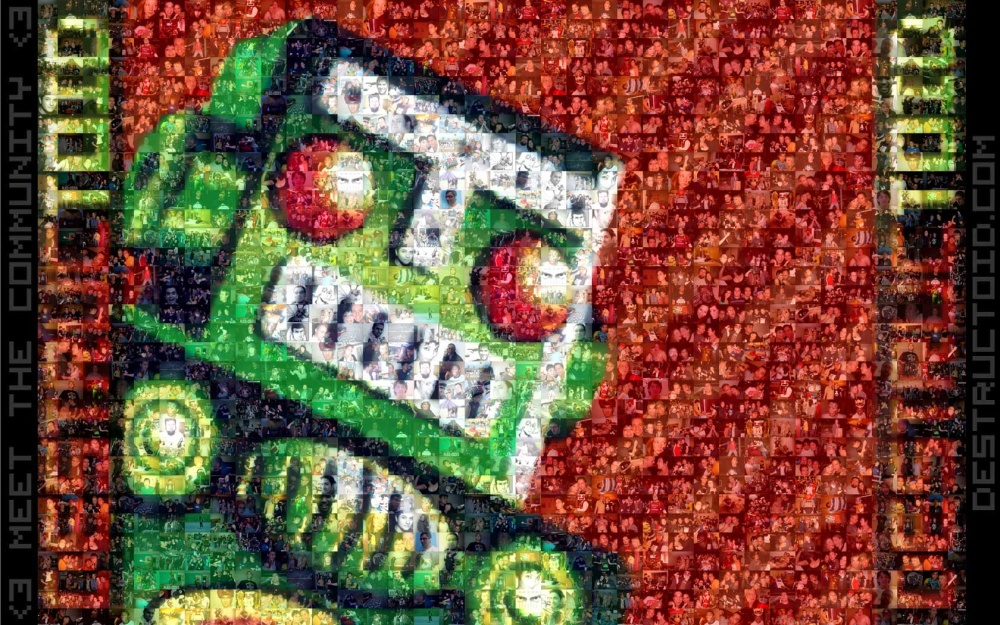 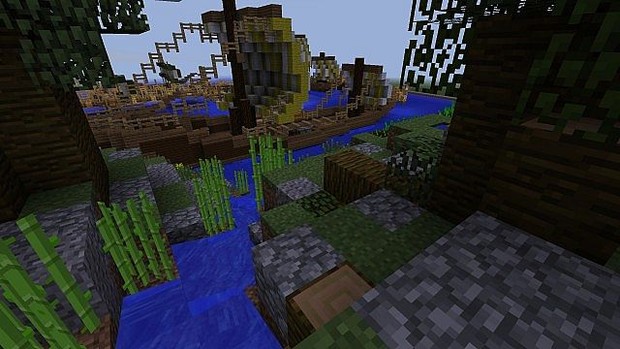 In the long, long ago – 3 years to be precise – I developed a new hobby. The art of minecraft builds. In the space of a year I placed tens of thousands of blocks by hand, and hundreds of thousands more by WorldEdit. As the needs of the education system called I had less and less time to build. I started doing speed builds, seeing how much I could do in the time I had, but eventually it was not enough and I stopped entirely. I got on with more important things, but looking back, I rather miss it. So join me as I reminisce on the history of Minecraft art.

Let’s start with motivation. What drives a Minecraft builder, like many artists, is the pride of putting something worthwhile into the world. For Minecraft, that tends to mean being able to show off your creations and skill, and to develop a style of your own that others will recognize. For people to look at your project and go ‘oh, it’s another [insert name here] build, awesome!’ – as of 3 years ago a building team called Sunfury opened a building server, and I joined in the hopes of building some nice stuff. I didn’t have a huge amount of ambition, I initially just wanted to build an adventure house with puzzles in it but I was hooked on blocks once finished. There is something about 3D pixel art that has a charming style of its own, one that compels you to make something better, so I kept building, trying to climb the ranks of the server. Those that reached the top got to join the team. And Sunfury built some awesome stuff, like this: 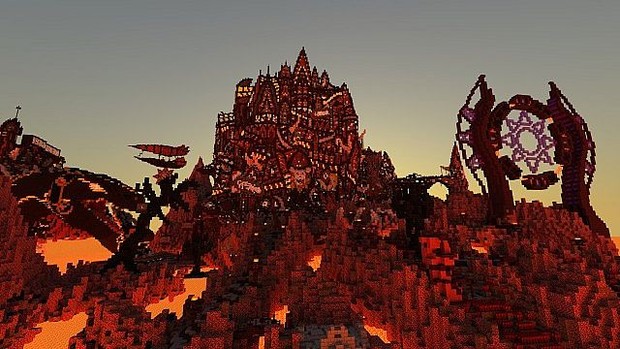 At the same time many building teams opened servers, though my place was on Sunfury’s. I reached the rank of Inferno on the server, where we were given a 300x300 plot to build in. That sounds like a lot, and when you stand in those plots they seem gargantuan – and we had to fill that space with an area of 90000 blocks with incredible art. Art to be judged by the leaders of the build team. That is where I stopped, my builds were not considered good enough by the leaders of Sunfury to move to the next level (Corona – and after that you were trialed for membership) and I couldn’t be asked to put in the effort required, and frankly I lacked the skill. For reference, this is what I built: 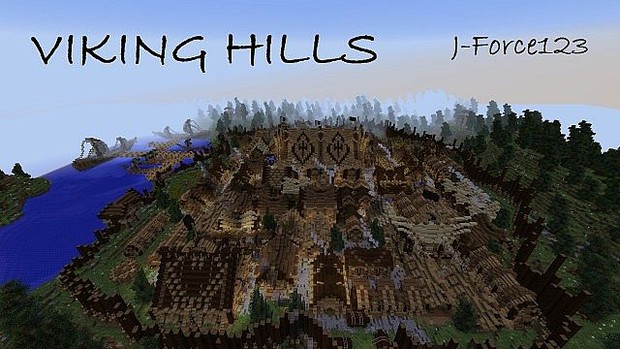 And in truth, that was the second Inferno build. The first (which was also rejected) was this: 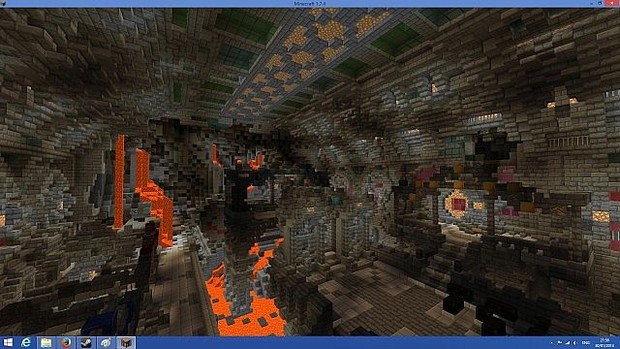 The point is, I was a good Minecraft builder – but the standard was greatness. As I worked on my comparatively little village, Sunfury themselves worked on gargantuan projects like this: 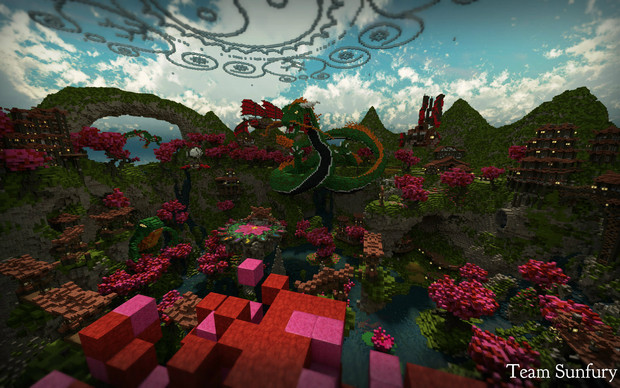 Just look at that. The curves, getting good curves from blocks is hard – try doing it with Lego and you’ll appreciate the genuine artistic skill required to do that. Minecraft’s artistic, architectural side has long flourished since the introduction of Creative Mode many moons ago. Around 1.5 it grew rapidly and there was much buzz about 1.7, and with good reason. The 1.7 update brought coloured glass and frost white quartz, nothing short of a revolution. It also brought a greater variety of browns in the form of dark oak wood, allowing artists to highlight patterns and edges, something I was sure to make use of. Compare the following two images of Viking Hills, the top one is pre-1.7, the lower image is about 1 month later (1.7 had a barney with Bukkit as I recall so servers took a while to update) and the difference at the time was incredible. Those in the higher echelons of the server were awash with creativity, trying out the new shades. 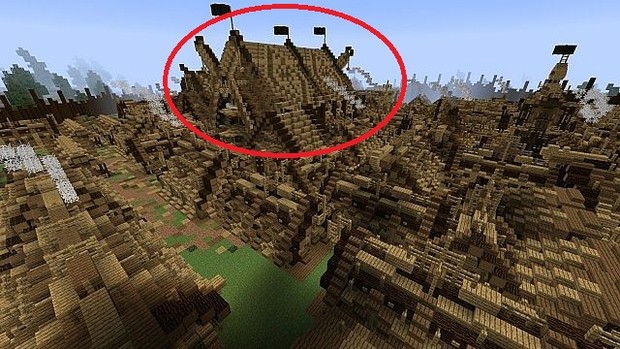 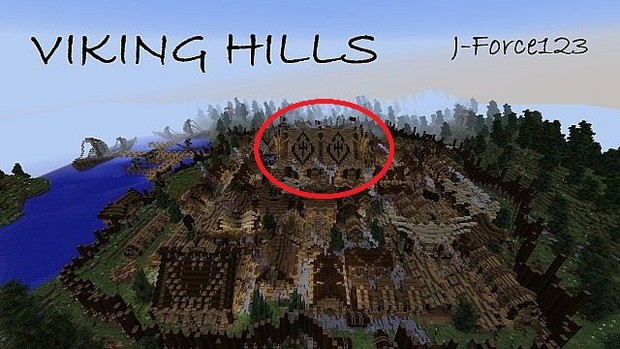 Whilst I was doing that, Sunfury built this: 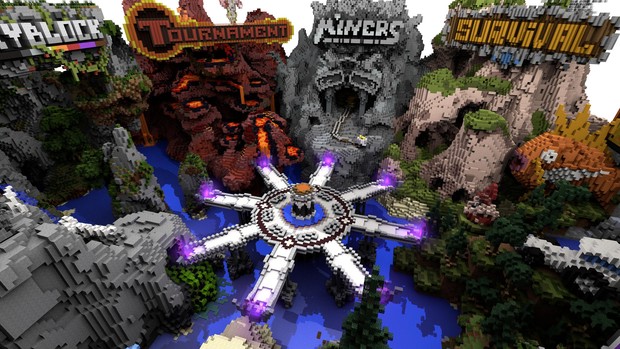 *sigh* makes my efforts look like crap. Though bear in mind that they boosted colour saturation and general brightness via photoshop. Who am I kidding, the original was incredible beyond words. Anyway, back to 1.7.

Imagine trying to paint something without having the colour white, and then having white, but it coming in a big crate full of watercolours too - that is what 1.7 was.

And it wasn’t just epic buildings that were considered the pinnacle of Minecraft art – occasionally a builder would show true artistic merit, something to make modern art critics all fuzzy inside. One builder, and I regret to have forgotten their name, used their Inferno plot to build a still sculpture of a golden stopwatch being thrown into the ground. The watch, now slightly broken, was suspended in the air as dirt was thrown up in a ring around it. It’s chain frozen in time as it flailed, the mechanisms part way through rattling their way out of the watch casing. All built out of about 300,000 blocks. But all good art needs a spot from which to appreciate it – and the creator knew this too. He built a little viewing platform with a sign that simply read ‘The Fall of Time’ – referring to both the falling stopwatch and the fact that the moment was frozen in time. How artsy. Meanwhile I just built a spaceship: 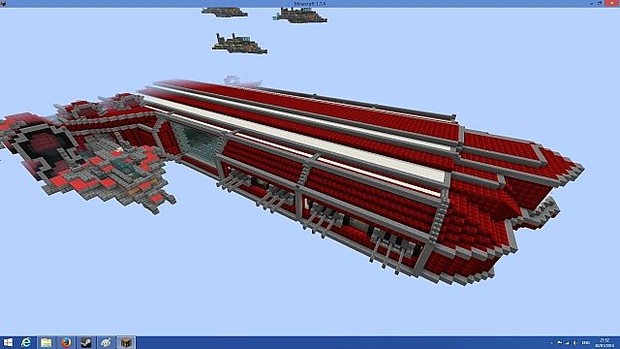 The great thing about Minecraft art is that unlike a Monet painting you can walk right up to it, touch it, and scrape away the layers without destroying the art (well, you do destroy it, but you can download a fresh copy). You get to peel back the layers until you find the wireframe of the structure, invariably made of colour coordinated wool. You get to see all of the intimidating Redstone and Command Block work that is slowly teaching 14 year olds how to program stuff, though that can be risky. It does go wrong of course, I once saw a builder try to make a set of magic portals – he mistyped something and got stuck in an infinite loop for 10 minutes as a crowd of builders gathered to admire their mismanaged handywork. That’s just about the only part of a Minecraft build you cannot usually get to admire up close: the cock-ups.

As builds grow in size and complexity a tool called WorldEdit becomes necessary. In the long long ago, just as I was starting out, WorldEdit was some new thing, considered to be cheating. It placed, changed and copy/pasted blocks with the click of the mouse. Work that would have taken days (such as the lovely kraken I’m about to show you) now took about 5 hours. Rather than building an entire castle you could build a small part of the wall and copy/paste it about until the full wall was complete, assuming there was a regular pattern to said wall. That’s the one thing WorldEdit did negatively affect: it discouraged working with curves as WorldEdit at the time didn’t know what to do with them. Stairs would get flipped, slabs would get misplaced – ornate curves became a rarity, though they are still popular with the bigger build teams who have the time and manpower to construct them by hand, or as the case often is, WorldEdit them and fix them afterwards; which can actually take longer if you use a lot of stairs.

I believe I promised you a kraken, so drink it in. 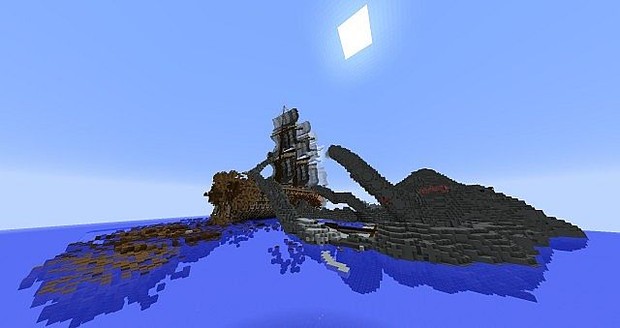 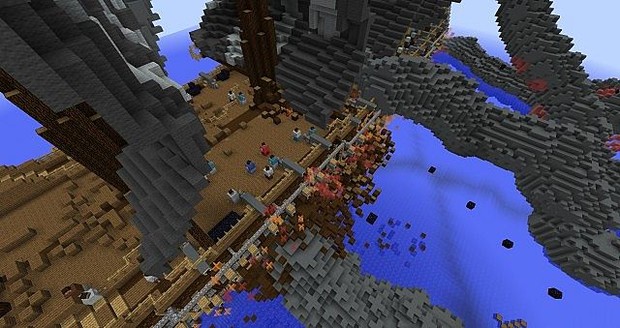 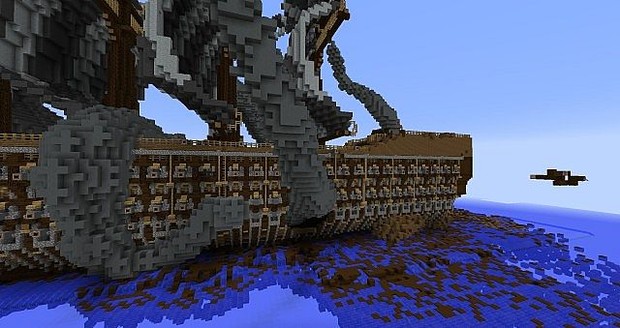 But Minecraft art is at a stage where it doesn’t really need more. The 1.8 patch was met with a certain amount of trepidation among the server, as crafting crude little details was always part of the fun. But 1.8 presented pre-packaged detail. The blocks gave us limitation – a challenge to be overcome. Now we have armor stands and banners, when before we built large banners from cloth which in turn allowed us to model the wind direction. Such little details are great for interior design, but when I see them on the outside of a grand structure I look at them and think ‘you could have done better, you could have done some ornate cloth patterns, or at least kept it consistent with the wind’ – such things inspire laziness amongst architects, though are certainly a boon for interior designers.

For us architects, 1.8 could be seen as a great shame, considering some of the innovative ways in which artists have used the blocks for unintended uses. Damaged anvil blocks are pretty standard on bridges; they are a good railing that gives a nice pattern on the top (due to the anvil texture) and arch-like features that look like a proper bridge, as far as Minecraft goes.

Taking your limited palette and turning it into art was simply fantastic, working out what textures complemented each other. Trying to get a ‘medieval’ look using quartz, wood and stone. Or using materials typically found in the depths of Minecrafts near infinite worlds to build a spaceship in the sky. It was a challenge, but now that we have our whites, our sexy red glass and some armor stands –nothing else is necessary. No more blocks are really needed, they would only serve to complicate or dilute the artistic challenge. Many of the newer blocks go almost completely unused, a shame, check out the stained glass in one of my more detailed builds: 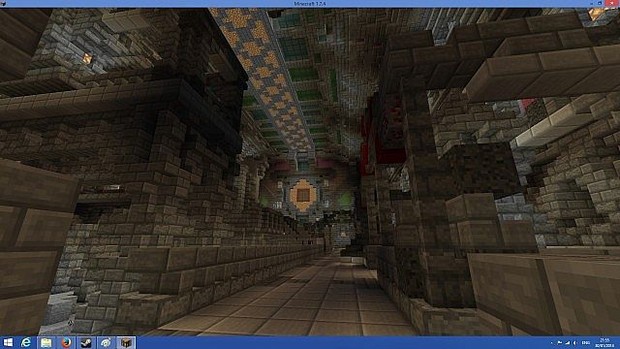 So as Microsoft unleashes Minecraft anew for Windows 10, I worry for the artistic scene. Obviously great art will continue to be made, buildings too fantastic for reality will be built, spaceships that couldn’t fly will be held aloft in their blocky form, but it will be harder and harder for new builders to learn the ropes and that will lead to fewer and fewer great artists. Look on the Planet Minecraft projects page where many such creations can be found, and at the time of writing there are very few sweeping curves. There is little use of stained glass. Whilst the long time artists toil away with their new palettes, newer ones appear to be struggling with the huge number of shades available. It’s not like we can just copy reality and go for the best likeness, Minecraft art tends to abide by its own rules that do not mesh well with the huge choice. The challenge is gradually diminished and replaced with a whitewash of intimidating colours that simply clutter my paintbrush. It’s great to give people choice, but not so much it confuses them. Minecraft is no exception, and it’s affecting creativity.

Maybe now isn’t the best time to get back into building.