Retro Terror for the Future

It was about 2:00 am in the morning and I heard someone or something that sounded like a wounded satanic gorilla; at least that’s what I imagined the cursed primate would sound like if it were roaming around Mars.

I felt like I was eight years old again, staring at a monitor and gently tapping the keyboard with sweaty fingers, hoping I didn’t wake up my friend or his family in the nearby rooms.

I swear I heard the satanic gorilla again, but where was it?

All of sudden, I caught a glimpse of something poking its head around the corner of a wall, next to a glowing barrel of toxic waste. I was pretty sure I saw something.

CRACK!!! I took an insane amount of damage from behind; reeling from the fierce blow, I attempted to get a round off with my shotgun, but by the time I saw those demonic yellow eyes it was too late. I cried out in agony and the world went red. 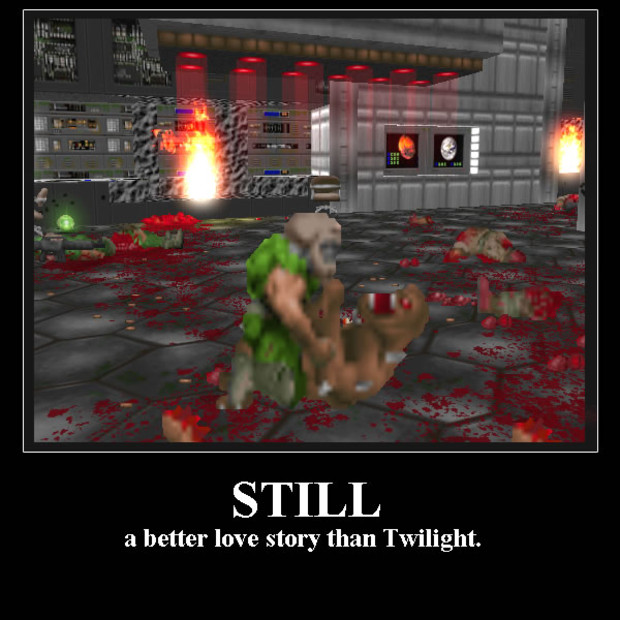 P.S. I’m new to blogging, but I’m going to aim to post something every week.

As far as focusing on a particular subject or series, we’ll see what happens. I’ll also being updating my gamertags as soon as my desktop and consoles arrive!

Addicted to writing, gaming, cute fluffy things and being out of my comfort zone.

Favourite Genre: I play all types of games, but I love platformers, RTS and first-person shooters.

Favourite Game Designer: It's another tie between Chris Seavor and Edmund McMillen. Lame! I know, but it's too hard to decide sometimes!

Favourite Developer: Bungie. No, wait! Blizzard. Bah! I suck at this.

All right. Enough with the favourites.

Other Stuff: I'm currently learning everything I can about writing for video games. If anyone else is interested in game writing, Professional Techniques for Video Game Writing by the IGDA / Edited by Wendy Despain is a fantastic book on the subject.

I think what I find most interesting about game writing is attempting to strike a balance between narrative and gameplay.

I'm a trained screenwriter, but I would also love to write for games someday.

I think that about covers it.

Thanks for stopping by and take care!