To conclude my series of blog posts about my collection of things, I’m going to show you my manga, comics and other books. I really want to read more, but I also want to finish some games, catch up with a lot of anime, make some terrible music, appreciate my figures, play some board games and card games, and write some stuff. There’s only so much time I have I’m not spending working, eating, and sleeping. But anyway, enjoy a look at the things made of paper I keep on shelves and in boxes. 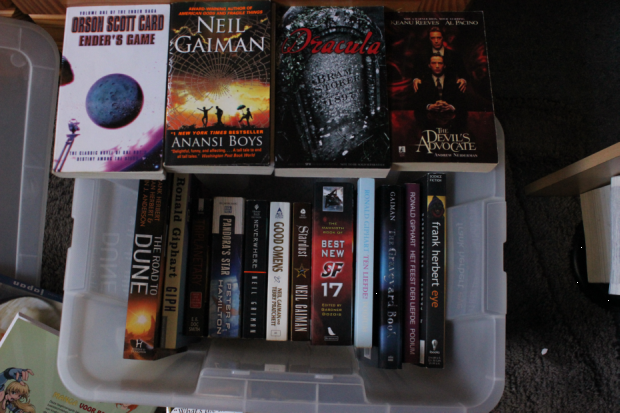 I like the work of Peter F. Hamilton, Frank Herbert, and Neil Gaiman, so they’re bound to show up a few times in my collection.

My favorite science fiction book of all time is Frank Herbert’s Dune. Sadly, his other works aren’t quite up to par.

Tidbit about The Devil’s Advocate: the literal translation of the title in Dutch is “Advocaat van de Duivel”. There’s a book with that exact same title released in the Netherlands, but it’s actually John Grisham’s The Firm. 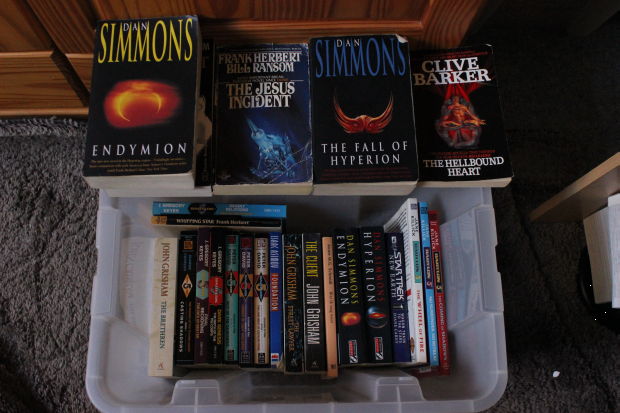 Some Babylon 5 novels — which are surprisingly good — and a few Dan Simmons books. Man, I love me some Endymion/Hyperion. You can bet your ass I’ll re-read those a few times the coming years. 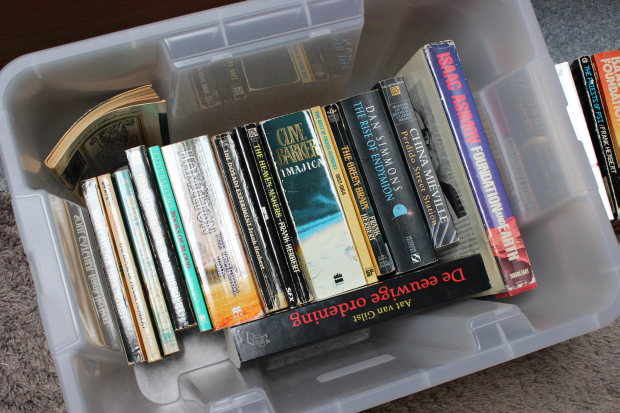 A bunch of older novels — mostly second-hand ones. 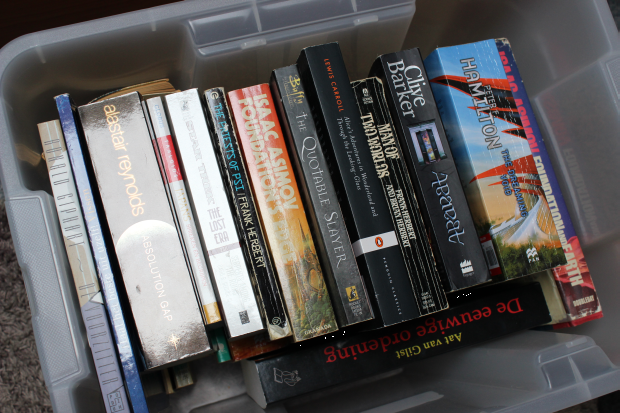 And a second layer of books in the same crate. 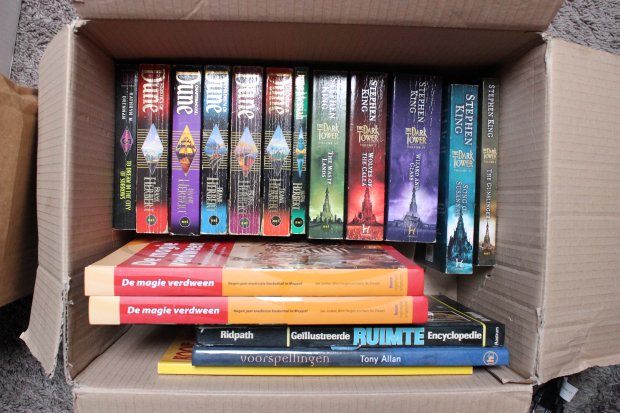 The entire Dune saga — I refuse to see Frank Herbert’s son’s work as part of the canon — and the first five parts of Stephen King’s The Dark Tower series. Both series are great. I still haven’t finished the last part of The Dark Tower, though. For some reason, I lost interest after encountering a character named Stephen King. But, for Susannah’s sake, I will finish reading the story. 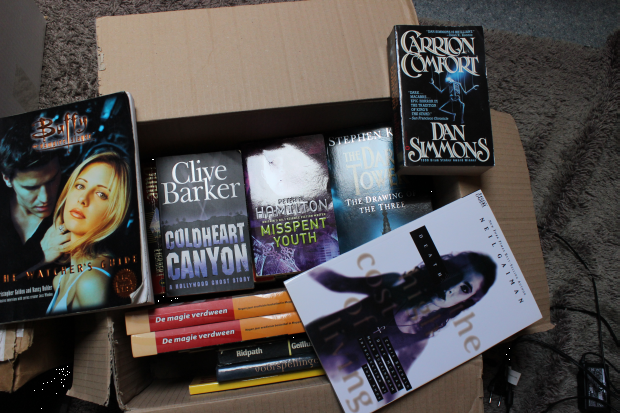 A second layer of books in the same box. That Gaiman comic on the right I bought twice. Once in this version and once as part of a bigger collection. That one will show up later in this blog. 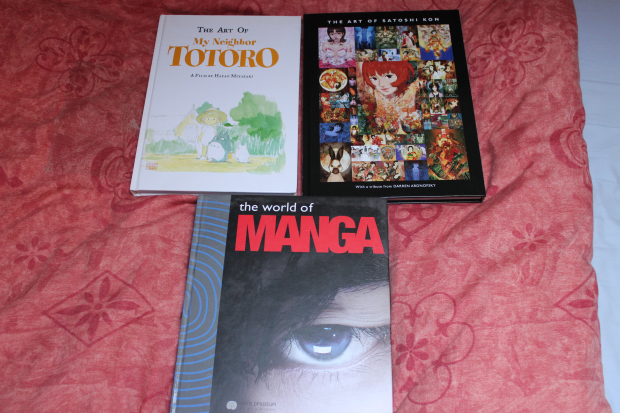 I don’t spend much money on art books. While liking them, they’re rather pricey. My Neighbor Totoro is my favorite anime movie, though, so I couldn’t pass up on this one.

The Satoshi Kon one was fairly cheap and I really love his movies. It’s sad to know there will probably never been another Satoshi Kon movie, as the project he was working on when he passed away will likely don’t get enough funding to be completed.

The World of Manga is a book I bought at some manga exposition in a Dutch museum. It was fairly cheap and actually offers a lot of content. 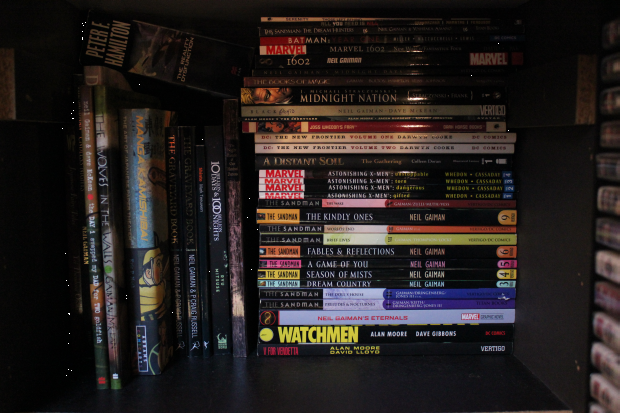 Here's most of my comics. V for Vendetta, Batman Year One, Watchmen, Astonishing X-men #1-4 (Joss Whedon), Fray, DC the New Frontier, 1602. Not a really extensive collection.

My absolute favorite comics among the bunch are the Sandman ones by Neil Gaiman. I absolutely love this story. Heck, one of its characters — Death — is inked on my left arm. There's a comic in there somewhere (hidden behind other books on the left) that's all about her and has some truly great art work. The comic I mentioned earlier is also in of this bundle.

There's also some other books here, by the way. Some children's books by Gaiman which really have terrific art work, and also a copy of The Art of Japanese Paper Theater. 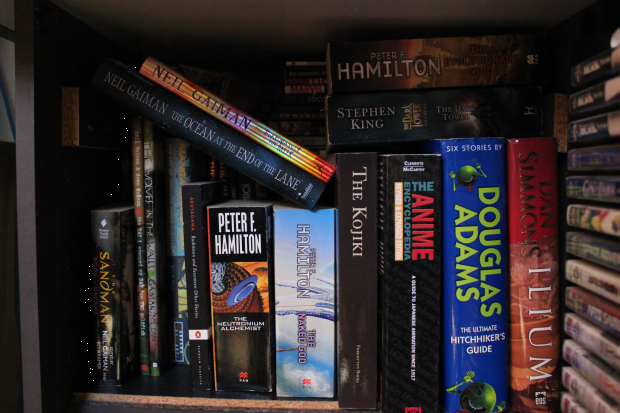 A layer of books in front of the comics. Books I still have to read. I did start in the Hitchhiker's Guide, though, and it's hilarious. Might even finish it one day.

The Kojiki is like a Japanese history book. I really need to start reading that one. 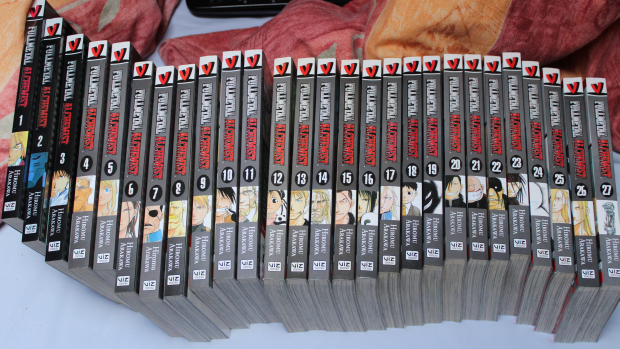 All right, time to switch to manga. I loved the Fullmetal Alchemist anime, so it was almost a foregone conclusion I’d buy the manga too. There’s 27 parts in total and of course they’re all present. 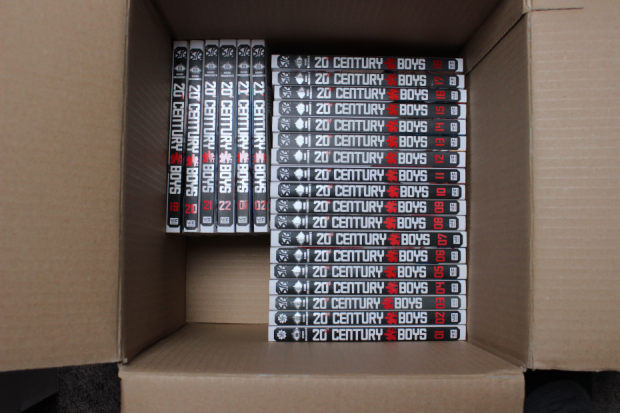 Probably my favorite manga I’ve read so far: 20th Century Boys and the two parts of 21st Century Boys that conclude this epic story. Heck, I loved them so much, I had a tattoo inked on my left arm that’s from this story. It’s the symbol I use as my profile image here and pretty much everywhere else. 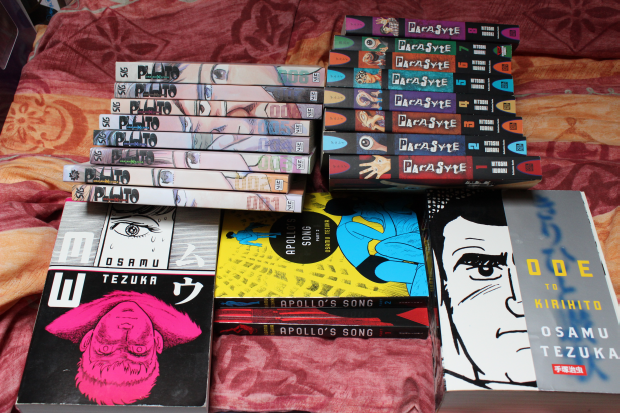 I’m not the biggest Osamu Tezuka fan, but he did write some notable stories. Both Ode to Kirihito and MW are well worth one’s time. The biggest problem I have with most of Tezuka’s work is the pacing, though. Sometimes stuff just feels too rushed in his manga and Apollo’s Song suffers from it as well.

Both Parasyte and Pluto are great manga, in my humble opinion. 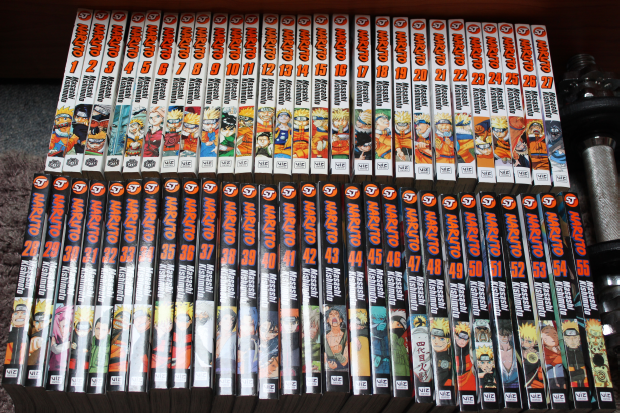 Yes, Naruto. The anime was my first real introduction into anime and despite all the fillers, I did enjoy it. The manga’s obviously a bit better since there’s no fillers, but it does take its sweet time to tell the story. As you can see, the color of the spines changed after part 27, which was right at a time skip in the story. 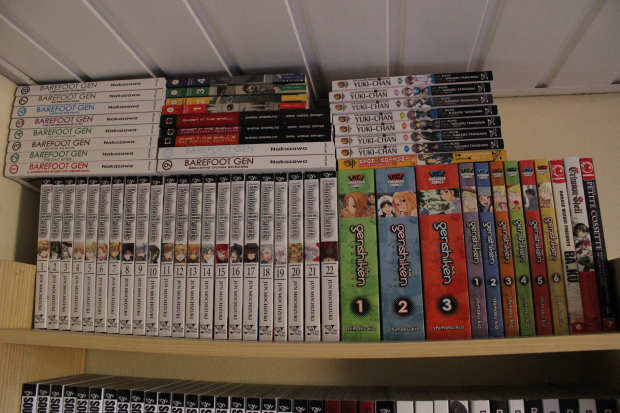 Barefoot Gen is a touching story about the aftermath of the a-bombs. I highly recommend this series. It even has a little bit of criticism on Japan’s role during World War II and that’s something you don’t see all that often.

Also pictured are Pandora Hearts, Genshiken, The Disappearance of Yuki-Chan, Ghost in the Shell, and a few random manga. 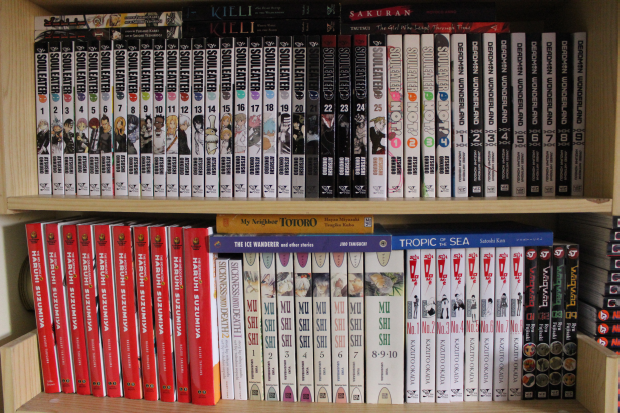 As you can see, the spines of Soul Eater turn black toward the later parts and I wonder if it mimics the story. The last part, 26, is white again, but the color of the lettering changed. I just started reading it, so I’ll be able to tell you in a few weeks. After I’ll finish the series, I’ll read the four parts of Soul Eater Not!, witch (no, not a typo) is right next to it.

I bought the first five volumes of Deadman Wonderland when it was still being published by Tokypop, but had to switch to Viz Media’s after they rescued the license. The covers differ greatly, so I had to buy them again. On that note: Deadman Wonderland 1-5 for sale. OOP!

On the shelf right beneath it, the Haruhi Suzumiya light novels, the great Mushishi series, rather smutty stuff in Sundome, and some other titles.

All of Berserk. Years back, I bought the first ten parts and sold them off when I didn’t feel like investingall that much money in an unfinished series that might never even see a proper finale. But at some point, I just wanted to read the story anyway, re-bought them and added all the other volumes as well. The story’s so gloriously dark and gritty. I love it. 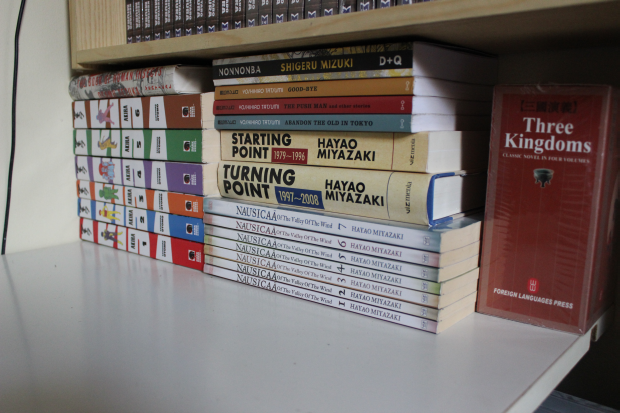 Now we get to something that I hate to show. Because I lack the space to properly store them in a way I can easily get to them, I have to stash a whole bunch of them on top of and in front of each other. This is phase one.

There’s some great titles here: Akira, Nausicaa, some Ghibli books, and a few manga released by Drawn & Quarterly, which are more adult titles. Not in the sense of them containing nudity or sex, but simply because they have more mature themes. Onwards Toward Their Noble Deaths is a recommendation. It’s a World War II story and it’s certainly not about the great Japanese Empire, but rather about a few pawns in the Japanese army. Good story and this one also contains a fair bit of criticism.

The Romance of the Three Kingdoms novels I bought so one day I might get all the anime that are inspired by them. 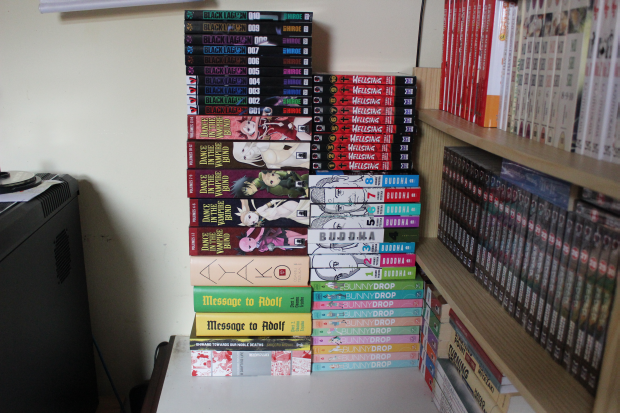 Also, every time I see that Buddha collection, I cry a little. The spine of part four is way different and I can’t get ahold of the one that completes it. 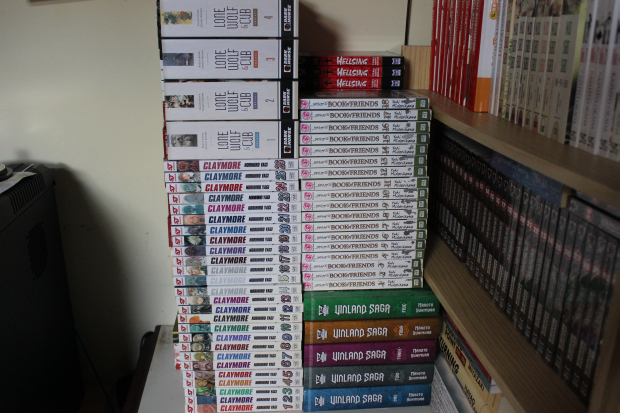 All of Claymore — the last part will be released soon, the first four Lone Wolf & Cub omnibuses, five Vinland Saga volumes — part 6 & 7 will seal if the rest of it gets released over here, and every released volume of Natsume’s Book of Friends. 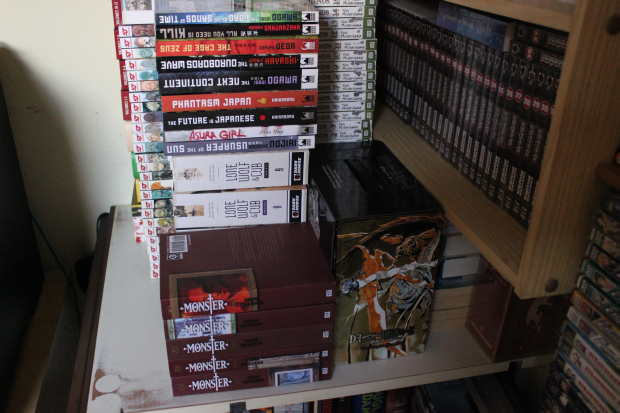 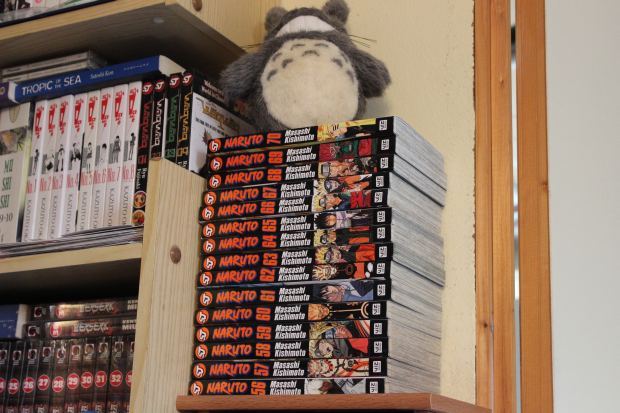 Here are some more volumes of Naruto and a cute Totoro on top. I received volume 71 (together with the first five Detroit Metal City volumes) a few days after taking the pictures. The 72nd part will wrap up the story and I won’t continue watching the anime until I’ve finished the manga. I’ve heard some things about how the saga ends and I’m not entirely sure it’ll end on a high note. 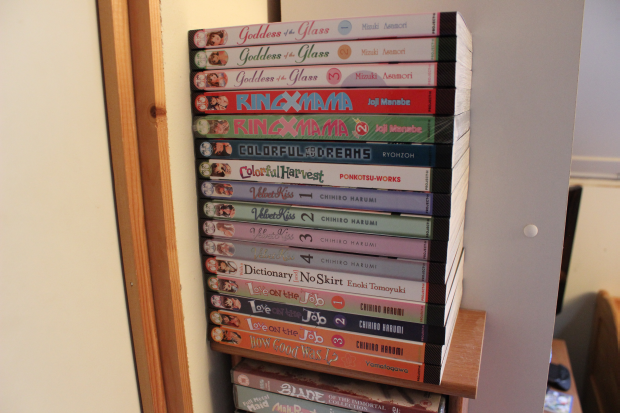 Thank you for reading this, folks. Hope you enjoyed it!