My collection of stuff - part 3: Figures

After the runaway successes that were the first two parts of my series of blogs on my collection on stuff I wasted too much money on while I could’ve spent it on things I actually have more use for, I decided to quickly post the third part to keep the positive vibes going. In the first part I wrote a bit about my games and hardware and the second part was all about my collection of optical discs. This time around, I’m going to talk a bit about my some pieces of plastic: my figures.

I was too lazy to unbox them to make proper pictures, so I included a link to the MFC entries of all the figures except the Nendoroid Petits.

I’m quite fond of the character Saber from Fate/Stay Night and I try to get my hand on every Nendoroid of her that gets released. If for some reason Nintendo ever releases a Saber Amiibo, I might even get it. The Nendoroid on the left is of singer Tamura Yukari. I got her as a birthday gift from my then-girlfriend. [Sabers: Extra, Alter, Lion, Saber, Super Movable, Zero, Lily & Racing ] 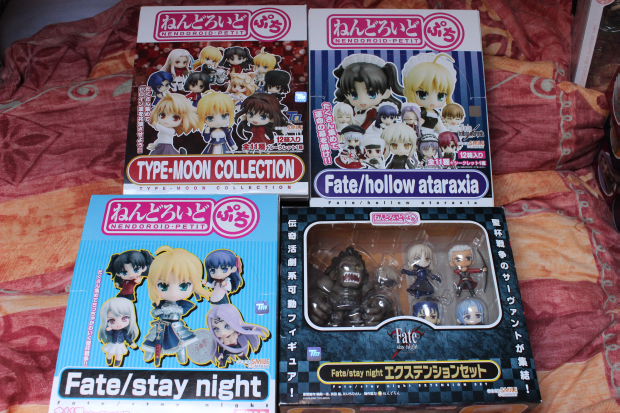 Some more Sabers hidden within all these Nendoroid Petits. The other characters from the Fate/Whatever franchise and other Type-Moon titles are quite cool too. I had them all displayed at one point, but as long as I don’t have a proper display case for them, I’ll keep ‘em boxed. They’re a pain to clean. 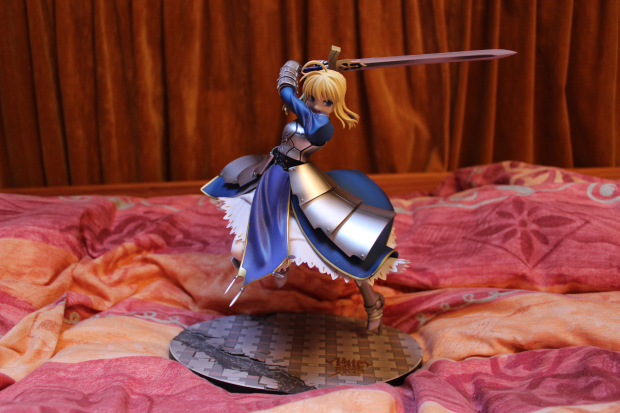 Another Saber and certainly no Nendoroid. This one is really a beautiful piece of synthetic material in my humble opinion. I had her unboxed for quite some time, but right after taking the picture, I put her back in storage. The armor makes it a pain to keep her dust free. 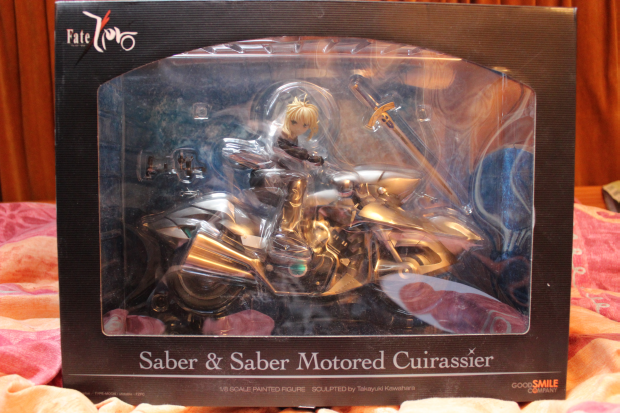 And yet another Saber. Good Smile Company really produced some nice figures over the course of several years and this one is a prime example. 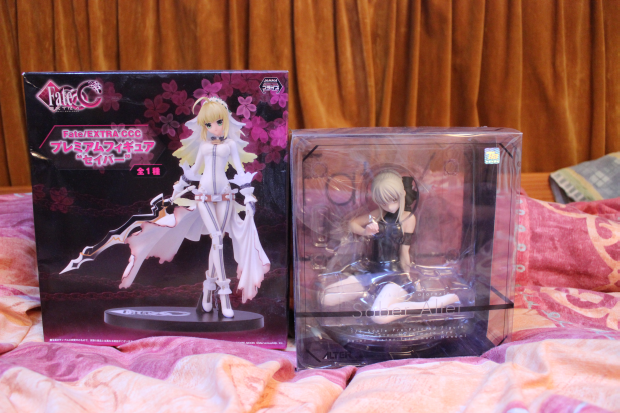 A cheap-ass Saber who I rather keep boxed — though she doesn’t even look that bad considering the budget price— and one with an almost sexy pose. Especially when you remove the ice cream from her hand, which makes it a quite suggestive pose. 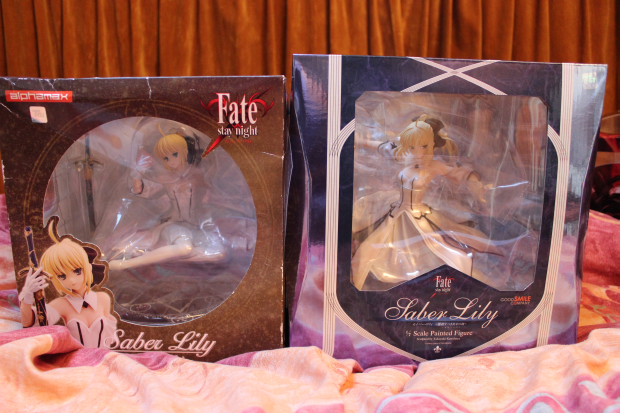 Hey, more Sabers. What a surprise. Both are very good looking. [Lily & Lily] 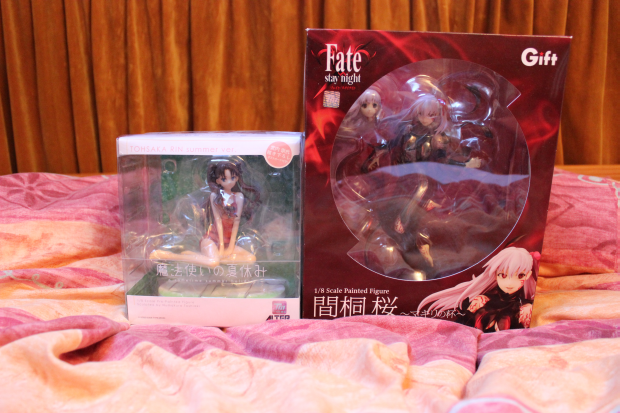 Time to change it up a bit. Rin and Sakura. Same franchise, still. I seriously want another Rin, but the one I really dig is awfully expensive nowadays. 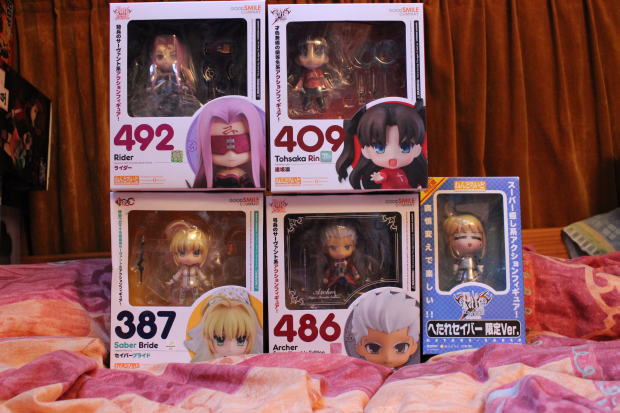 Two more Saber Nendoroids here. The one on the right is one of the earlier Nendoroids (#002) and quite frankly looks rather silly. Still, it’s a Saber. Rider, Rin, and Archer are quite nice too. 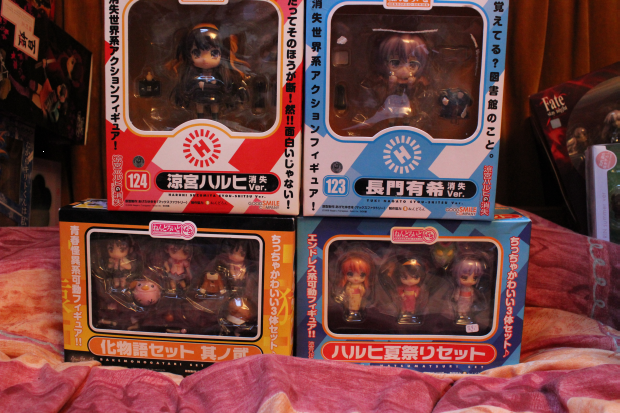 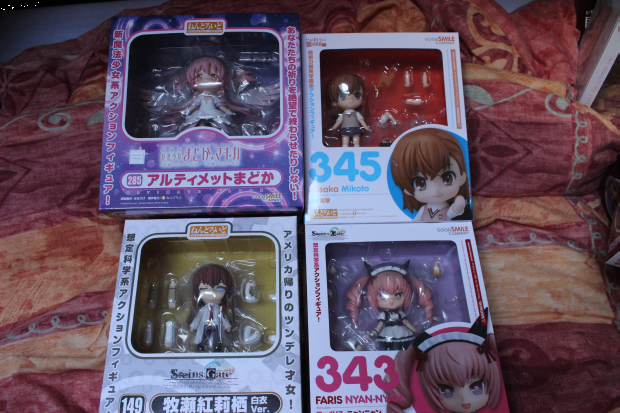 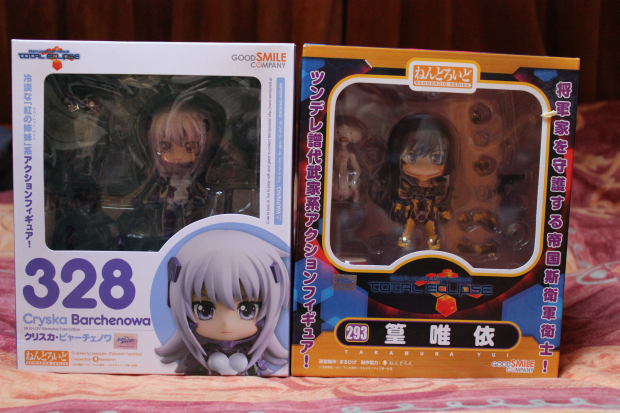 I didn't even like Muv-Luv Alternative Total Eclipse that much, but Cryska and Yui were Nendoroids I couldn't skip for whatever reason. The Cryskas an Yui pictured somewhere below blow these out of the water, though. 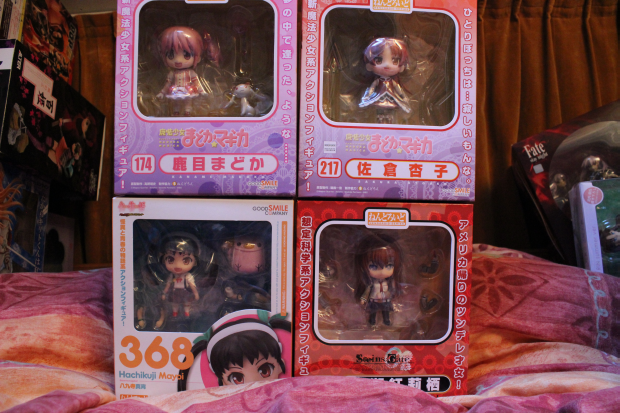 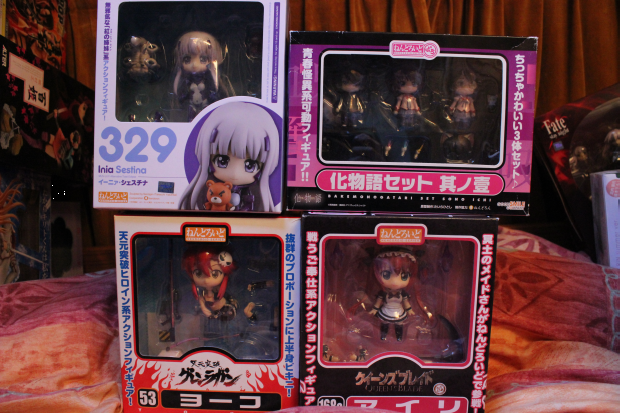 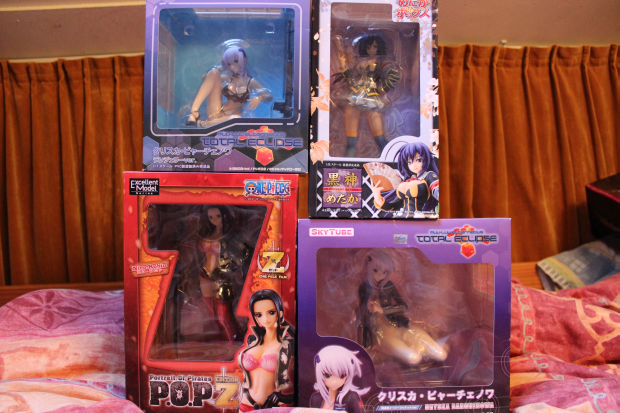 Finally, some other figures. Here we have two gorgeous Cryskas, Medaka (Medaka Box), and Nico Robin (One Piece). 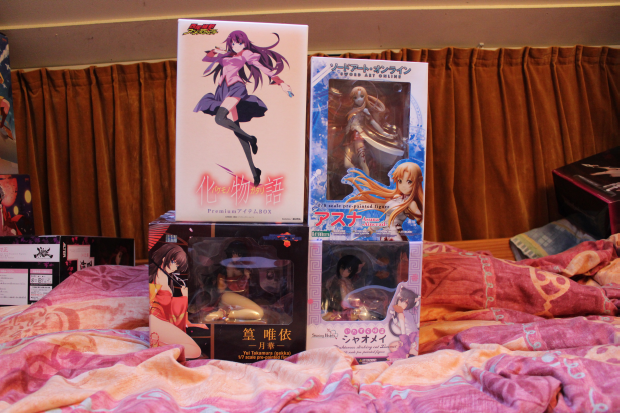 Oh, silly me; there's still a Nendoroid left. The box on the top left is a limited edition Hitagi (Bakemonogatari). It came with some sweet extra goodies. Next to her is Asuna (Sword Art Online). On the bottom a sexy Yui (the Muv-Luv Way Too Long Title one) and Xiao Mei (Shining Hearts). 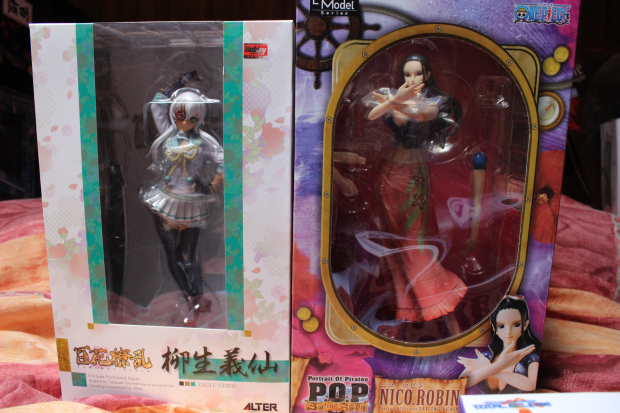 Alter’s version of Gisen (Hyakky Ryouran) is a really pretty one. Once I get a display case, she’ll get a prominent place in it. On the right another Nico Robin. Definitely my favorite female in One Piece.

Some cheapo figures here. Well, except the Asa (Shuffle!) on the left. She isn’t really worth the price I paid for it, however. And will you look at that, there's even another Saber. Others: Nami (One Piece), Nico Robin, butt-ugly Revy (Black Lagoon), Yoko (Gurren Lagann), Haruhi. 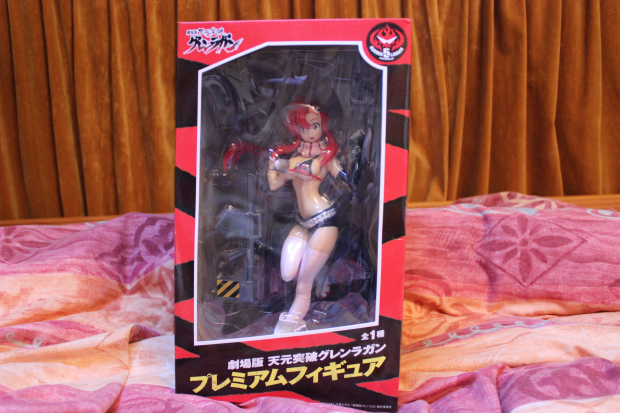 Another Yoko. She was cheap, but she looks surprisingly good. If there'd be more figures in that price range with that quality, I'd probably own a lot more of 'em. 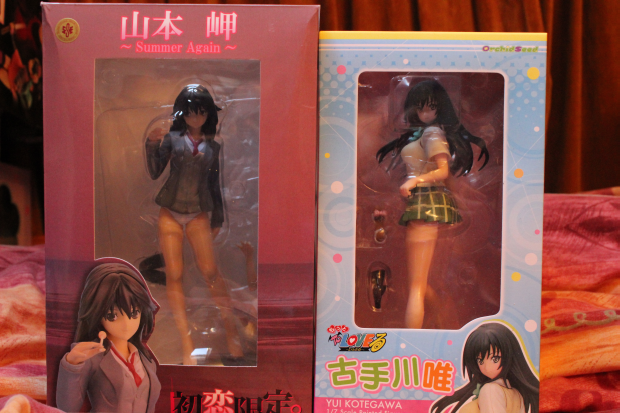 Yamamoto (Hatsukoi Limited) and Yui (To Love-Ru). Yui is what makes To Love-Ru one of my favorite ecchi anime. I don't like the chin of the Yamamoto one, by the way. It's a bit too pointy. 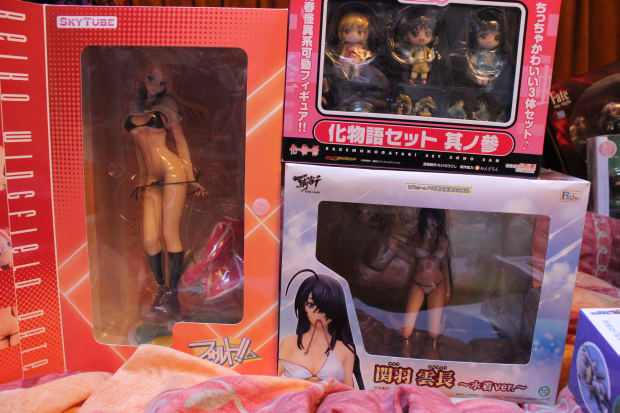 Oh, right, some Bakemonogatari Nendoroid Petits. I forgot I had more of them. On the left, one you can strip off her clothes: Reiko (Fault!!). And if I'd like, I can make Kan'u topless. 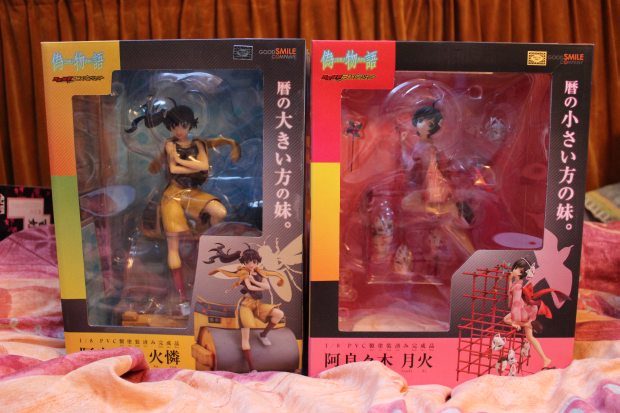 The Fire Sisters from Nisemonogatari. Two more examples of Good Smile Company’s great work. I like Karen more as a character (I'd brush her teeth), but when it comes to these two figures, Tsukihi wins. 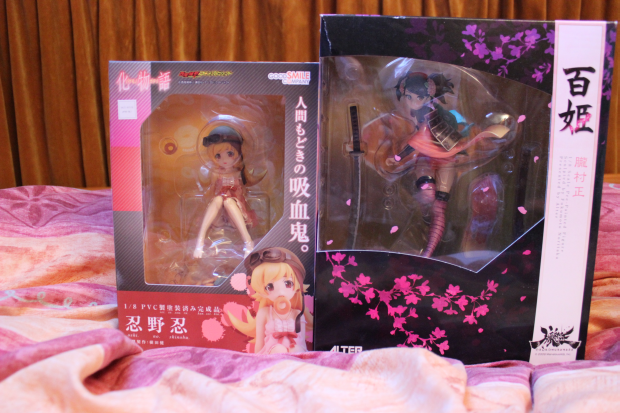 And to finish it up, Shinobu (Bakemonogatari) and the absolutely gorgeous Momohime (Muramasa Rebirth). Apart from some of the Sabers, I think Momohime is my favorite figure.

Next part of this critically acclaimed series on my collection will be manga, books & comics. It'll probably be the last part. I think I'm too lazy to make pictures of all my wallscrolls, t-shirts and small items I keep around.