My collection of stuff - part 2: Anime and other things on optical discs

It took me some time, but it's finally here: part 2 of my blog series on my collection of way too much stuff I'll never get around to play/watch/read in its entirety. The first part covered my games and hardware. This second part will be about the anime I own on DVD and blu-ray and some live-action stuff and other animated shenanigans.

Note: I don't really care about having stuff in any logical order, so you might get a bit antsy when seeing this chaos. 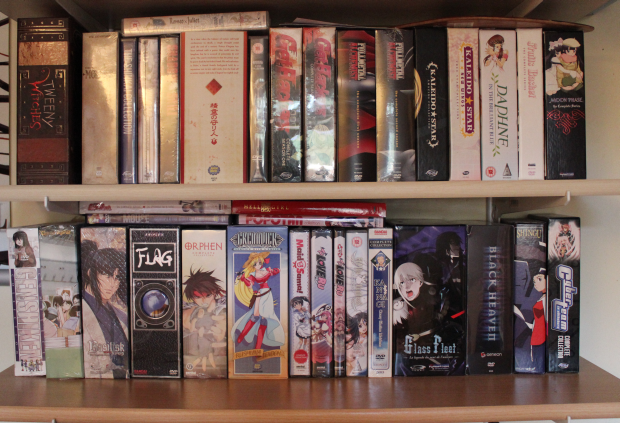 These two shelves are right above my main pc and contain some random titles. Classics like Fullmetal Alchemist can be found alongside the acrobatic and surprisingly amusing Kaleido Star. There's also otaku goodness in Genshiken, a goddess out of her element in Kannagi, one of the most lovely maids in Maid Sama!, ecchi in spades in To Love-Ru, and the awesome metal in The Legend of Black Heaven.

The limited editions of The Melancholy of Haruhi Suzumiya are filled with goodies I don't really care about, but I love how all episodes are available twice in them. There's discs with the chronological order of the episodes and there's discs with the broadcast order. If you've never seen the show and might want to give it a shot: broadcast order is where the fun is. Haibane Renmei is also well worth one’s time. 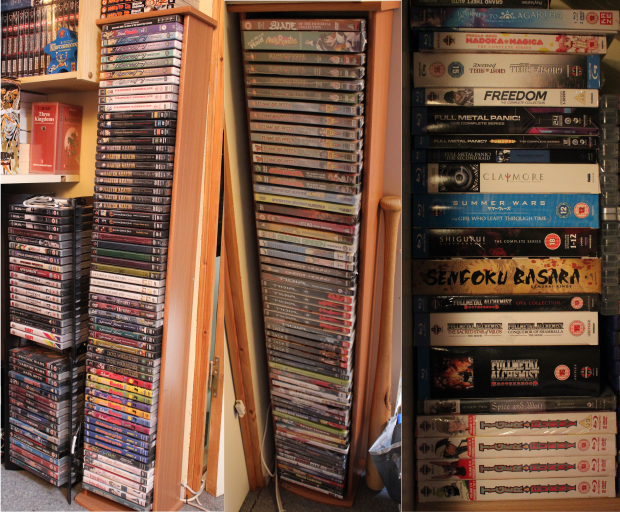 These are actually three different images thrown together. Some titles you probably can't make out from the picture on the left: Darker than Black, Death Note, Corpse Princess, 5 Centimeters per Second, Figure 17, the oddly hilarious slice of life Strawberry Marshmallow, Master Keaton, and the fun comedy School Rumble.

Some titles from the middle part: Noir, Serial Experiments Lain, Ghost Hound, Maria Holic, His and Her Circumstances (what the hell was with that ending?), True Tears, and Detroit Metal City.

On the right's some blu-rays again: Tiger & Bunny, the awesome Fullmetal Alchemist: Brotherhood, the equally awesome Puella Magi Madoka Magica, and all of the great Full Metal Panic. Yes, even Fumoffu was terrific, in my humble opinion.

And yes, that's a baseball bat. It's to protect me from ShadeOfLight. 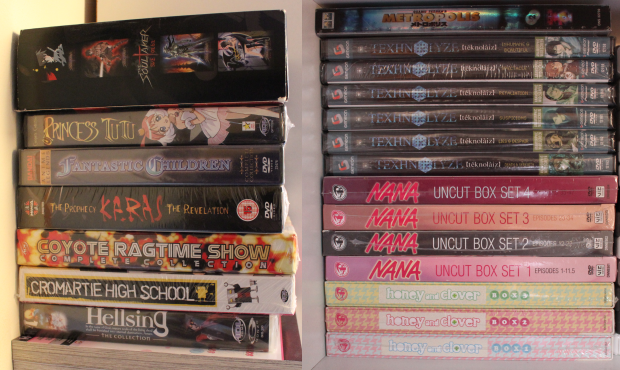 These were two images at first, but this takes a lot less space. Hellsing is a highly enjoyable anime. Honey and Clover too. By the way, you might notice a lot of these DVDs are still sealed. Some of them I still have to watch and some of them I watched as a fansub. I don't mind buying them commercially even if the chance's low I'll watch them again. Nowadays, I hardly ever download fansubs anymore. And if I do, they’re mostly OVAs that probably won't see the light of day over here in the west. 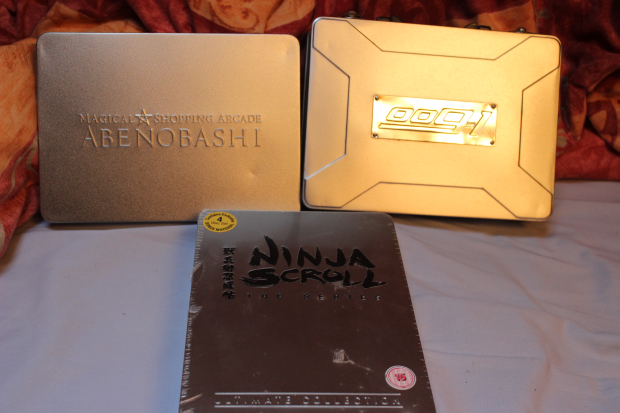 I love me some tin cases, but boy, do they dent quickly. I bought Magical Shopping Arcade Abenobashi twice. The first one didn't have any liner notes, so I upgraded to a set which had them. There are so many references in this quirky comedy, you are bound to miss out on a lot of them. A truly great show too. Now I want to say something about the ending of that show, but if you haven't seen it and plan to, I'd feel bad to spoil it for you.

Some more great series here. Neon Genesis Evangelion, the first series based on a visual novel I completed with Shuffle!, Baccano!, one of my all-time favorites series in Mushishi, the intriguing cyber thriller Ghost in the Shell: Stand Alone Complex, Trigun, and yes, Batman: Gotham Knight. It's actually made by some renowned Japanese studios.

Some more blu-rays and a few DVDs here. Both seasons of the tear-inducing Clannad, eye candy in Paprika, zombie shenanigans in Highschool of the Dead, both seasons of Ef, awesome Saber in Fate/Zero, the Mardock Scramble movies, jazzy Kids on the Slope, deathly Angel Beats, the sublime Akira, a tin version of My Neighbor Totoro, some other Ghibli movies, Yu Yu Hakusho, the weirdness of FLCL, and Soul Eater.

Mostly blu-rays here. As you can see, these are in front of the DVDs you saw in the last picture. The cuteness of Usagi Drop, the fun of Space Dandy, the post-war tale of Giovanni's Island, Attack on Titan, everything Monogatari that's been released in the UK, Psycho-Pass, Jormungand, the live-action 20th Century Boys movies, K-ON!, and three Ghibli movies that aren't released on blu-ray yet. Only Yesterday hasn't even seen the light of day yet in the US if I recall correctly.

There's also my second copy of Durarara!! It was sent to me as a replacment for some faulty discs in the other set.

Some more random series. The quite worthwhile Noein, the classic The Vision of Escaflowne, Slayers, the terrible Engrish and enjoyable rock music of Beck, the weirdness of Welcome to the NHK, and the sweet fun of Kamichu! 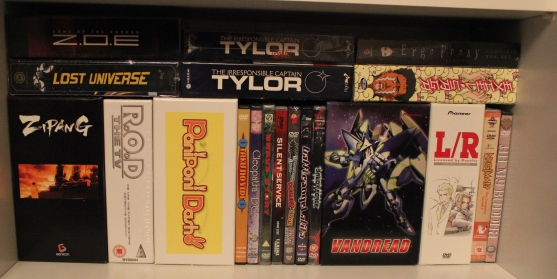 Some more classics and other mess here. The Irresponsible Captain Tylor is massively fun, Ergo Proxy is breathtakingly weird, Excel Saga is just plain weird (nsfw example), Otaku no Video is a must-see, and then there’s Zipang. That good-looking box is a sad story. Zipang, pretty much The Final Countdown as an anime, was released in seven parts, but I only managed to purchase six of them for a decent price. The part I’m missing is still available at some outlets, but I refuse to pay through my nose for it. $99.99 and up is way out the range I’m willing to pay for a single disc.

More random titles. Barefoot Gen’s about the aftermath of the a-bomb, Golden Boy’s about erections, The Tatami Galaxy’s a really weird story, Midori Days tells a story about a guy who has a right hand that’s actually a girl, R.O.D. the OVA is the best anime about books, Tokyo Godfathers is my favorite Christmas anime, Millennium Actress is a gorgeous Satoshi Kon movie, and Memories has a segment about the worst-smelling guy in the history of mankind. 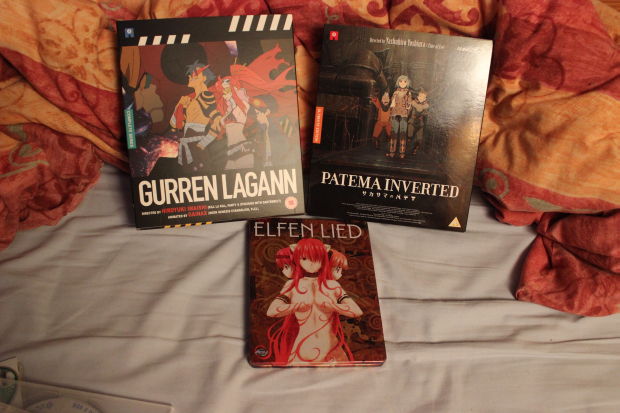 Here’s two rather big boxes and cute little tin case of one of my most beloved series, Elfen Lied. The Tengen Toppa Gurren Lagann box has an gorgeous art book, but the cardboard box that holds the blu-rays was a problematic one. First one of the plastic things that holds the discs was shifted out of place due to some spotty glue work. They sent me a replacement box which came in all dented because of the shitty packaging. Luckily, they actually care about their customers, so I received a second replacement. Sadly, Anime Limited has a history of faulty products. Apart from this packaging and the replacement set for Durara!!, I also received two replacement discs for the Cowboy Bebop blu-ray sets I have.

I helped fund the Patema Inverted release through kickstarter and nothing beats seeing your own name in the credits. Great movie, too! 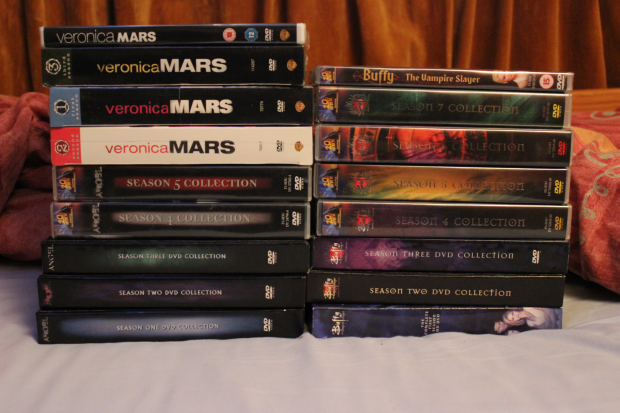 Angel, Buffy: the Vampire Slayer, Veronica Mars. Three series I loved and probably will re-watch in the near future. I haven’t even seen the Veronica Mars movie yet. I wasn’t just enamored by the series itself, by the way. Kristen Bell just ticks off a lot of boxes for me. 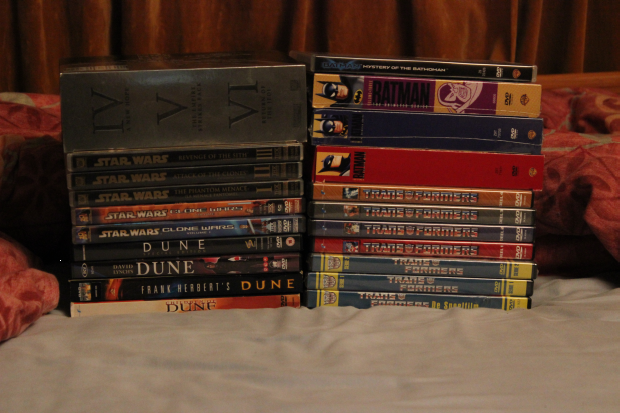 Some science fiction and animated stuff. I don’t really like the Star Wars prequels all that much, yet I still bought them.

Dune is one my favorite books of all time, and I don’t really mind the David Lynch movie or the way too colorful mini-series.

Batman: the Animated Series is one my favorite animated series not made in Japan. Fast-paced, dark fun. 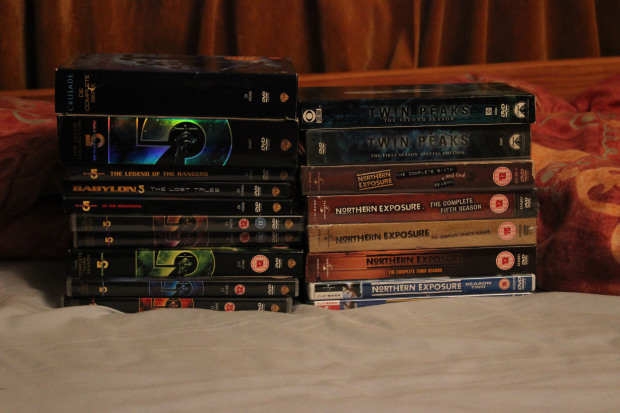 I love Babylon 5. Even The Legend of the Rangers. But that’s because it had G’Kar.

Next to it one of the most quirky series I know, Northern Exposure. Watching that somehow makes me want to go to Alaska and live there myself. Yes, I know it wasn’t actually filmed in Alaska.

And Twin Peaks makes me want to roam around in forests. 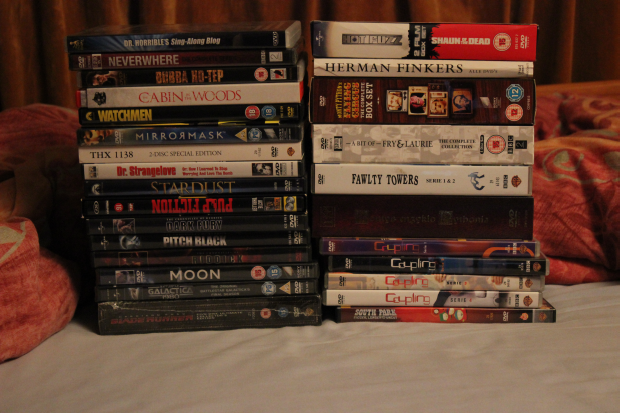 Some random movies, British comedies and a Dutch box set of a locally well-known comedian.

Coupling might just be my favorite comedy of all time. I’ve watched it at least five times and some episodes really make me laugh out loud and that’s not something I do a lot when watching comedies. I think my favorite episodes revolves about the Hebrew word for breasts. 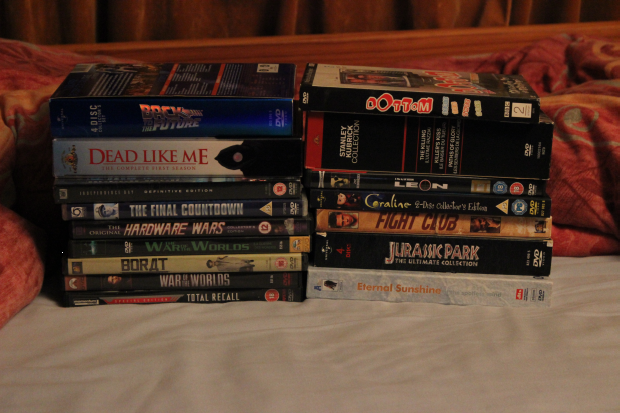 Eternal Sunshine of the Spotless Mind is one my favorite movies. It's so "real" despite being terribly unrealistic. 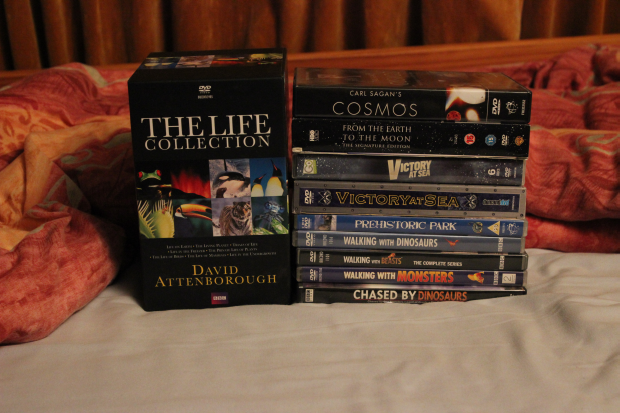 Documentaries! I can’t recall the amount of times the soothing voice of Sir David Attenborough made my hangovers more bearable. The other documentaries cover three things I like: space, dinosaurs, and sea battles. 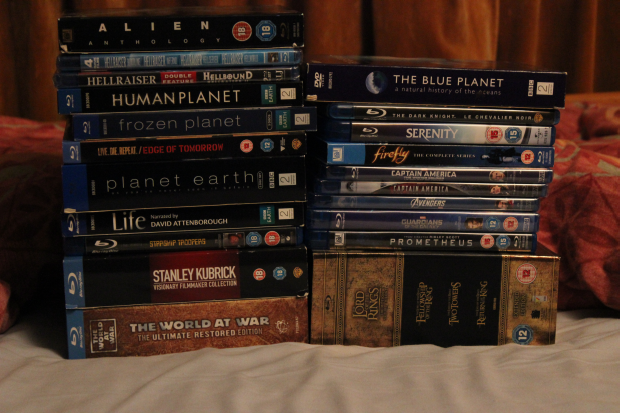 The first two Alien movies are just awesome while completely different. The third one’s okayish, the fourth one is a comedy.

The World at War is a complete nostalgia trip for me, but it’s also simply a rather impressive look on World War II. I especially like the episodes that involve warships. Nothing beats a big boat shooting massive shells. 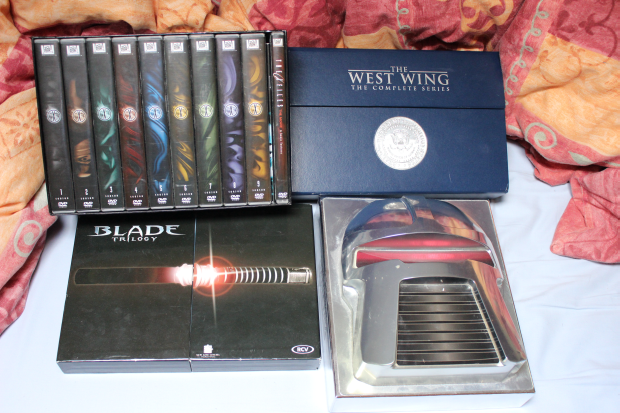 The X-Files is a good show, but it’s hard to watch when someone pulls a mobile phone out of their pocket the size of a calculator without it having a touchscreen.

I really should get around watching The West Wing already. 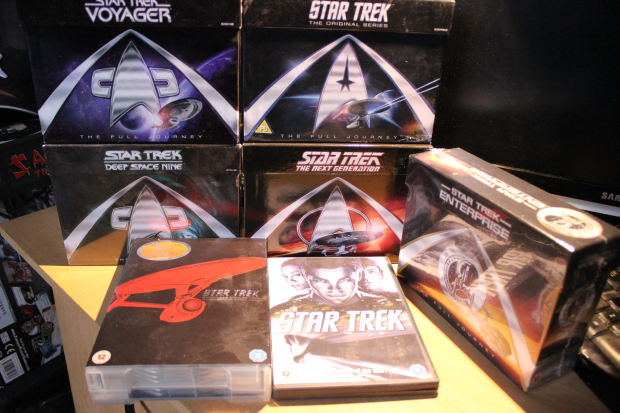 And to finish up this way too image-heavy blog entry is everything Star Trek I own.

Here’s a list of everything I own. I think it’s up to date, but over the course of several years, I might’ve missed a few titles. The last few months, I sold off a part of my live-action collection, so there’s a chance some of the titles might still be in the list as well.

Hope you enjoyed looking at this mess. Next up is my figure collection.