The Xenosaga trilogy was a formative experience in my life. I have fond memories of playing the games in my heady pre-teen years, that magical time when I was far less cynical about the world. For years I held it up as a masterpiece, in my still forming mind it was the trilogy to end all others. When a possible HD collection came up for discussion last year, I thought it might be fun to revisit the trilogy and see how well it held up to a 23 year old me. Nostalgia is a bitch. 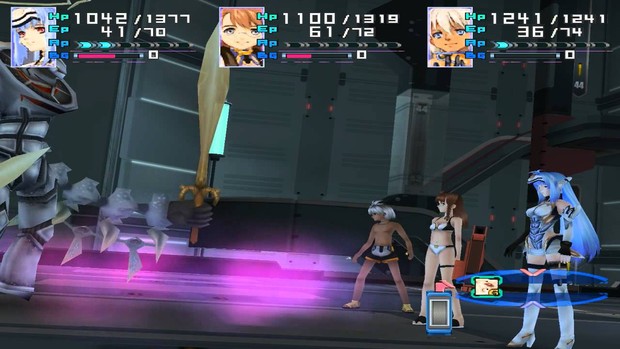 Let me start by saying that Xenosaga Ep. 1 is by no means a bad game, but it can be a fucking slog. It has an absolutely fantastic opening, full of technical mumbo jumbo no one could possibly understand, but boy those camera cuts sure are cinematic! It starts out intriguing enough, placing you in a virtual world tutorial level to get you up to speed. The pace throught the first 15 hours is about 60/40 cutscenes to gameplay, which is precisely how I remembered it. I'm a big narrative guy, so I was super happy with the way the game was progressing. Unfortunately for me this pace didn't last.

The battle system is fantastic. It's a very unique system that's somewhat hard to explain in writing. It gives you multiple basic attacks and "super" attacks called tech attacks, combined with a traditional magic system called ether. There is a good amount of room for customization and experimentation in this system, and you need to wrap your head around it quickly. This game is unforgiving, bosses can and will kick your ass if you don't prepare yourself accordingly. Even grinding has limited use as levels don't mean much in terms of stats. Instead your power mostly comes from the use of 3 different kind of points earned in battle, points that are used to learn new spells, abilities, and skills. These points can also be used to up your stats to a ridiculous level. The problem is the game never really explains how important pouring points into your stats is. The points used for upping your stats are the same ones used to level up your special attacks. So naturally I, and I assume most others, pumped their points into their attacks and completely ignored their stats; leading to a huge power discrepancy at boss time. 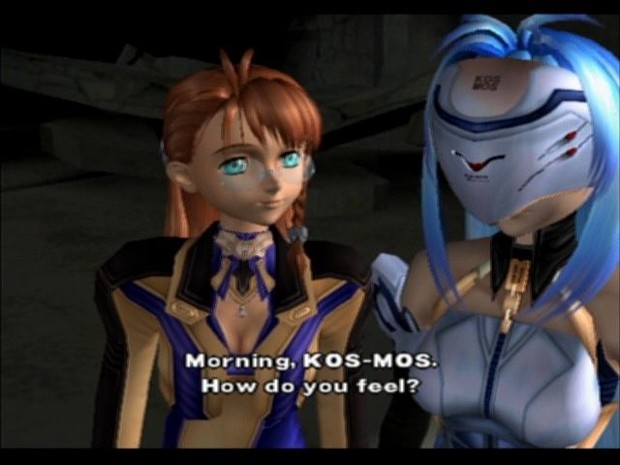 The main problem with Xenosaga Ep. 1 is that it's just too methodical. The game is so damn slow in every respect, and it becomes infuriating looong before the endgame. First of all battles take way too long thanks to the admittedly awesome animations. Every basic attack has an animation that lasts just long enough to bother you, but not to put you over the edge. Then you have your tech attacks, which all have really cool animations that are amazing the first time you see it, but are way too fucking long. They become a regular part of battle quickly, and before I even reached the halfway point I was so tired of watching the animations play over and over with no option to skip them. Eventually every battle became a chore, and I found myself popping an escape pack more often than I actually battled. Thankfully our lord and savior Erde Kaiser becomes available before the final dungeon. Erde Kaiser is essentially the Knights of the Round of Xenosaga, except in this game it can kill every boss except 2 in one shot. It also features a skippable animation, making it the ultimate weapon. Once it was in my possession I never touched another attack except against the last 2 bosses, who I hit them a few times until they got within the damage threshold and then summoned Erde Kaiser. 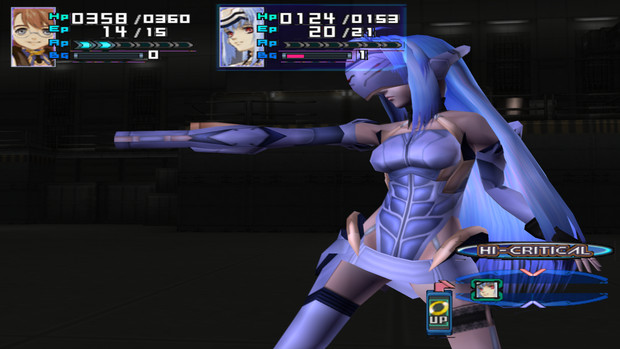 Battle is not the only aspect of Xenosaga that's slow. Menus have a noticeable open and close time, menus lag just enough that I sometimes find myself opening the wrong menu because I pushed the button before my cursor reaches the right listing. Luckily the run animation isn't too bad, but you always run into debris that has to be destroyed, or elevators, or buttons, or something else that has a way too long animation associated with it. Level layout remains relatively straightforward for 90% of the game, but the last two dungeons suddenly introduce puzzles and alternate pathways. It was at this point that I pulled up a faq, because there was no way in hell I was going to run around fighting a bunch of tediously long battles trying find the right path. 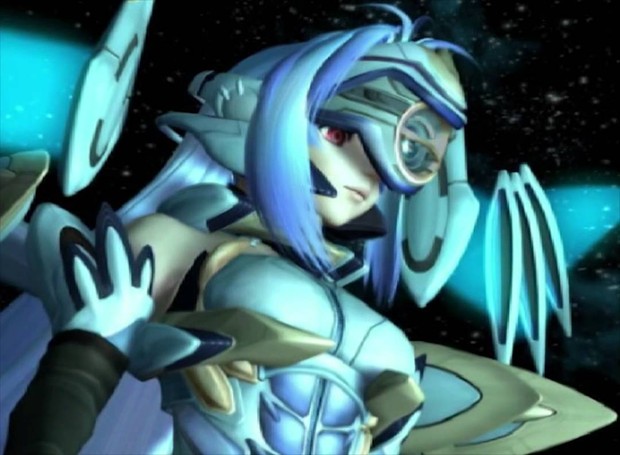 Xenosaga is fucking crazy plot wise. I vaguely remember that it wraps up pretty well in the end, but this first episode is an absolute clusterfuck. Strange terms and names are tossed out left and right nonchalantly. As far as I'm concerned it's impossible to follow what the hell is going on in this game. I just finished it today and I can't keep it straight. Weird things just happen over and over with no explanation, except the occasional anime gasp of a name of something/someone you have no prior knowledge of. It's insane, but intentional. It's clear that they expect you to play all the games to grasp anything concrete out of this first episode. Even the main character Shion is confused about what's happening, making her position a relatable one. Every character in the party seems to have some kind of connection to the greater narrative, but what that connection is remains a mystery even after the credits roll. 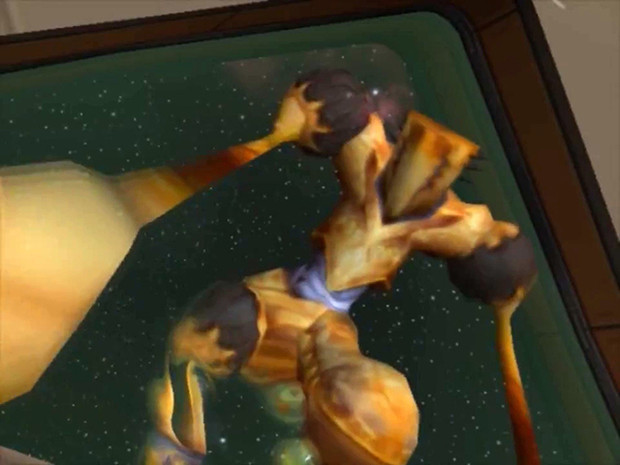 Xenosaga still looks pretty good for an early PS2 release. I think this is mainly due to it's distinctive anime art style. Environments are fairly spartan but character models look fine and faces are super expressive. There are definitely some areas that show their age, but when it comes to the sci-fi environments like ships and space colonies, the game looks alright. Voice acting is pretty strong, with the notable exception of chaos who lives in bad anime dub territory. The games soundtrack is really lacking. There are only a handful of tracks in this 40 hour game. You will hear the same battle music in regular battles and boss battles with only one exception. Most dungeons have no accompanying theme, instead all you hear is white noise and footsteps. Cutscenes sometimes have music, but the same few tracks get heavy rotation. It's a real shame, because what's there is pretty awesome. 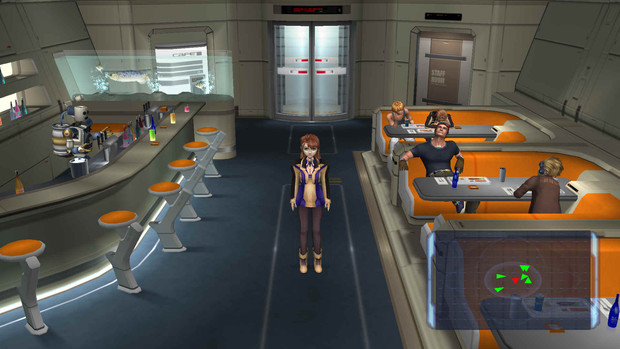 Xenosaga Ep.1 is not the game I remembered. As I said upfront nostalgia is a bitch, and she slapped me hard with this one. I was planning on playing all three games in a row, but now I'm leaning towards both taking a break and possibly skipping Ep. 2, which I remember as being the weakest of the trilogy. When the HD collection was being discussed there were plenty of people asking if they should play the trilogy, and back then I replied with a definitive yes. After this experience I'm a lot more hesitant. I can only hope Episode 3 holds up.