Team Fortress 2. What hasn't been said about Valve's team based first person shooter/hat simulator? Since it's release in 2007 as part of the Orange Box compilation (which included Half-Life 2, it's two episodes, and the original Portal), the game (the PC version at least) has been reworked and balanced so many times, adding new weapons, maps, modes, buffing classes, nerfing classes, to the point that that Team Fortress 2 of 2015 is vastly different from what it was in 2007. And while some people see this a detetrement, I personally love that the game is constantly being built upon even to this day, and Team Fortress 2 is one of the few online shooters that I find myself still coming back to, in one way or another.

But what is it about Team Fortress 2 that is so appealing that after all these years to me and the millions of players who still hop on everyday? You know, other than the bright colors, the crazy weapons, the memorable personalities of the classes, and the off the rails silly story? While I can't speak for anyone else, I will say that personally, Team Fortress 2, more than any other game that has or since come out, really emphasizes the importance of working as a team. Each of the nine classes have their own strengths and weaknesses, and each one plays a vital role in one way or another, and the key to victory often lies on players effectively using those classes and their skills: the Demoman and Sniper use their grenades/stickies and sniper rifle to pick off foes and disrupt the enemy team from a distance (or up close with the Demoman's melee weapons), the Engineer is great for supporting the other classes by providing teloporters, dispensers to heal health and ammo, and sentries to protect key areas, the Pyro is a great up close class that is great for pushing people back and finding spies, the Spy is great for players who like to sneakily take down other players and ruin a team's defense, and the Scout, Heavy, and Soldier are all great classes at taking the offensive and securing control points or intelligence because of their speed, the amount of health they have, and the effectiveness of their damage output respectively. But of all the classes that I've played as Team Fortress 2, there's one that I always find myself to be the best at. This class is one that while not know for being a powerhouse, is a vital part of any team and is on the front lines alongside his other teammates. One who fills a important role of keeping everyone on the team alive and ready to fight. And while I've gotten more kills with Soldier and Heavy than this class, if I want to play Team Fortress 2 seriously, this is the class I turn to.

I am of course referring to the Medic. 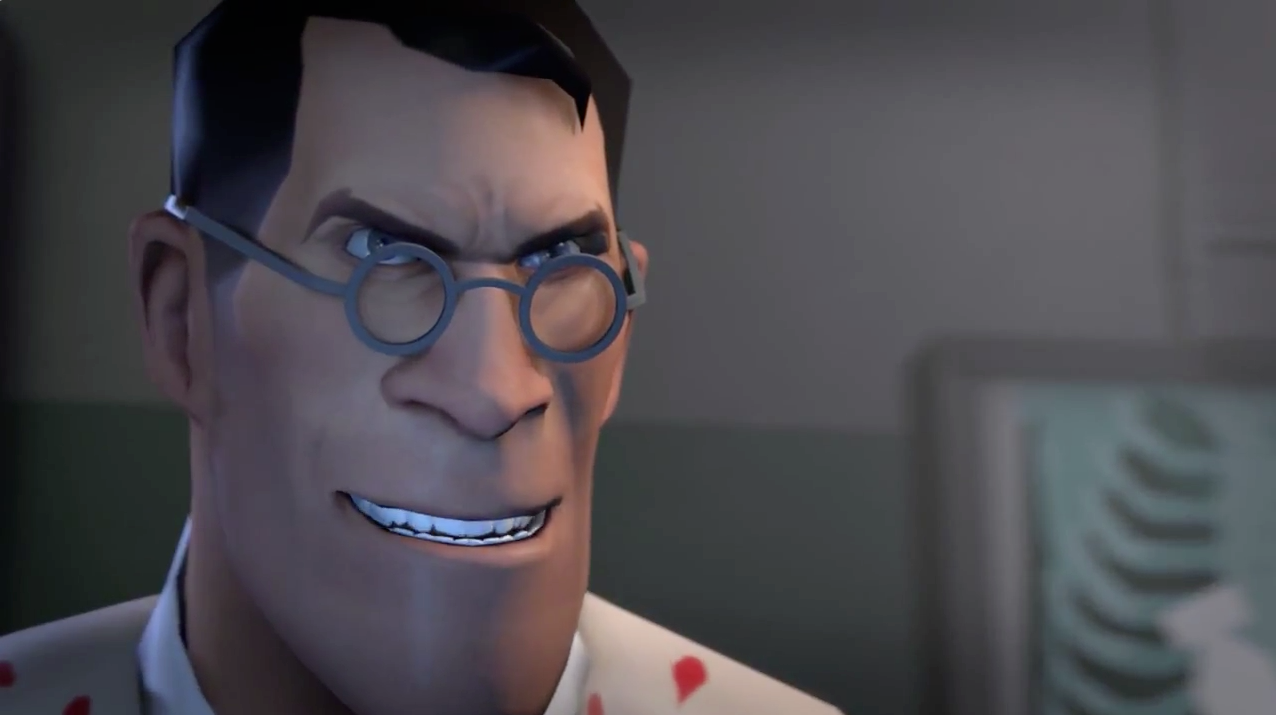 Perhaps the funniest thing about the Medic was that I didn't intially latch onto him when the game came out. I intially started playing the vanilla version of Team Fortress 2 on the Xbox 360 (something something PC Master Race), and I mainly focused on Soldier and Pyro in that version, which I rarely played outside of some free weekend of Xbox Live Gold, though I followed every major update and comic that was released for the game. It wasn't until Valve released Meet The Medic and made the game free-to-play that I decided to get into the PC version and see what all the hubbub was about. Despite not being a big PC player at the time, I was able to hop into Team Fortress 2 no problem, despite the fact that I wasn't very good. One day, while playing on a random server, the team I was on losing and needed a Medic. Since no one wanted to be the Medic, and since I wasn't doing all that well with the Pyro, I stepped up to the challenge and decided it was time to practice medicine.

No sooner did I switch over to Medic that I was backstabbed by a Spy. A few seconds later after I respawned from that, I got shot by Sniper who caught me standing around. After that, I was blown up by a Demoman, mowed down by a Heavy, and burned to a crisp by a Pyro, in that order. We ended up losing the match, and the guy who ran the server I was on,who was also on my team, kicked me. Needless to say, not a good first time experince.

Now most people who experinced this woud probably throw up their hands and not play anymore, thinking it to be a lost cause; I'm not like most people. While I did terribly my first time, I realized that the Medic was a class that fit my play style perfectly at the time: being able to help the team, but doing something that doesn't involve me getting into too much trouble. Before long I was practicing on bots, learning when to properly heal my teammates, what overhealing was, who got top priority when it came to using my ubercharge, and when to be a massive coward and run away. And while I wasn't always the team MVP (or was that good if I'm being honest here), I always made sure that the people who were much better at the game than me were fully healed and ready to go. 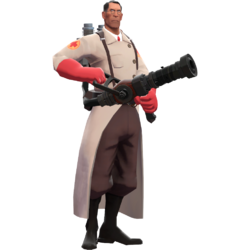 As I played him more, I realized that the Medic was my favorite of the nine classes, personality wise. He comes off as more of a mad scientist that a doctor: he's cruel, messed up, and laughs at others pain and misery. Granted, the other classes do that too, but the difference being that the Medic is the class who's sole purpose is to heal the others, which to me makes him more messed up than any of the other classes. And yes I know that other classes over the years have gotten their own weapons that let them heal, but that's not the point. Yes, the Medic has a degree in medicine (supposedly), but Valve has made it a point to empahaize the fact that he sees his team and his opponents as nothing more then guinea pigs in his messed up experiments, and sees being able to heal them as low, if non-existant, priority. In other words, have you ever heard the old George Carlin joke about how the world's worse doctor exists, and someone has an appointment with them tomorrow? That's the Medic; and I love him for it.

Of course, it also helps that he has one of my favorite weapons of any classes in the game: the Kritzkrieg, which is one of his four Medi Guns. For those that don't know, the Medi Gun is the Medic's secondary weapon that lets him heal his team and Disgused enemy Spies; as you heal, you fill up an uber meter which when full, grants a special ability based on what Medi Gun you're using. The default Medi-Gun makes you invincible for a 8 seconds, the Quick-Fix prevents blow back and let's a Medic travel with whoever they're healing, and the Vaccinator grants small mini resitiances such as fire, gun, and explosive damage. What does the Kritzkrieg do when fully charged? For eight seconds, it grants who ever the Medic is healing at the time 100 percent guranteed critical hits, so if you use it on a class that does a ton of damage, like a Heavy or a Soldier, you can do some serious damage with it. Granted, it requires perfect timing on your part, and it's super easy to get killed while using, but when it's pulled off perfectly, it's one of the most satisfying moments in video games.

Perhaps the biggest infulence of playing Medic as often as I did is the fact that my playstyle in Team Fortress 2 changed drastically; not just as a Medic, but whenever I hoped over to the other classes. I made it a point to always move and never stand in one place out of fear that a Sniper would peg me, even if I was playing as a class that wasn't very mobile, like the Heavy. I was always aware of my surroundings, and kept an eye out on whether a Spy had made it's way past our defenses, though knowing my luck, the Spy usually backstabbed me before I could properly warn everyone. I even ended up getting a headset (despite how uncomfortable I am about my voice) so to effectively communicate with my team. But most important of all, playing as Medic broke all my pre-concieved notions about playing online. I was never a big fan of playing online seriously before Team Fortress 2 (due to my anti-social nature), but after playing, I realized I rather liked it quite a bit and made it a point to play online much more; I even made a couple of new friends that way and reconnected with some old ones because of it! 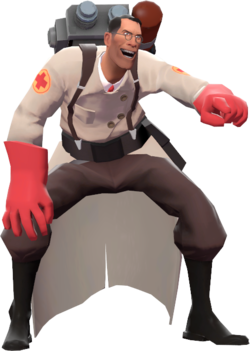 I'm not going to sit here and tell you that I'm an awesome Medic player or that playing Medic in means I'm now the greatest Team Fortress 2 player of all time. I'm not going to tell you that the Medic is the best class; hell, I haven't played Medic in such a long time, on account of the fact that I don't play Team Fortress 2 due to real life getting in the way, and the few times I do play, I mostly play on servers that are more concerned about chewing the fat and making jokes than they are about winning. But know this: if you ever need someone to overheal you, I'll be there. If you just barely survived a Demoman barrage of Grenades and need to get patched up, I'll be there. If you're on fire due to an enemy Pyro and need to mitgate the burn damage, I'll be there. And if you need to waste those tiny cowards on the opposing team....well, you get the idea. Because I'm the Medic, and I'm in the business of making people feel better so they can go hurt other people. And business is booming.