Gaming & The Mall: A Brief Essay/Retrospective

When i was a kid, nothing was quite as awesome as the local mall. Everyone remembers the local shopping mall, I'm sure, since in the 1980s and 1990s it was an epicenter of culture that it just isn't today. Back then, if you needed something, be it tools, shoes, appliances, or consumer electronics, chances are that you went to the mall to get it, and it always seemed like an event.

What was my local mall? Well, it was and still is the Edison Mall, located in scenic Fort Myers, Florida. 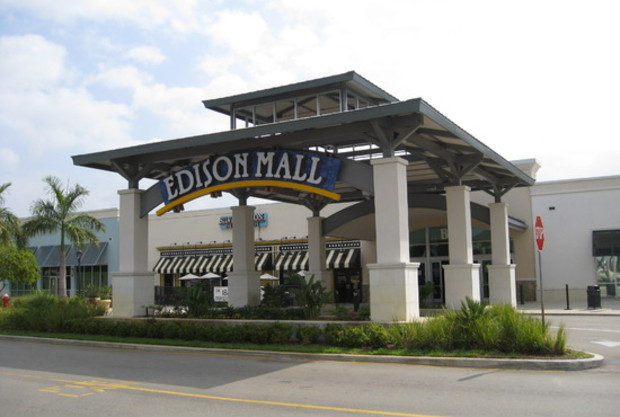 I used to go there with my dad during the summer, when school was out and I was bored at home. See, I was an only child, so I got bored too damn easily. My mom worked full-time, so during the summer my dad and I would find stuff to do to get out of the house. Our routine would usually begin early in the morning, with breakfast at a local Mel's Diner or IHOP. We usually got to the mall around 10 or 11 AM, where we made sure to park at Sears, one of the anchor stores in this particular mall. 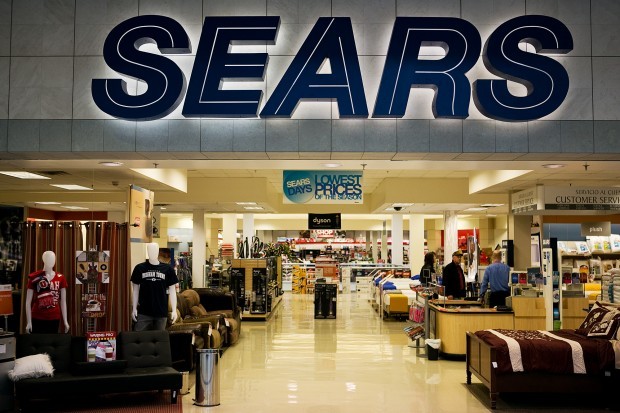 Sears itself is still a neat store, since a lot of the layout hasn't really changed in 20 years. Sure, the TVs have all been upgraded and the fashions they are selling are up to date, but a lot of the layout is pretty much the same as it was years ago. In some ways, it's a quaint look back into the past. The one thing that has changed is the location of the video games.

Sears used to have an amazing little section for selling video games. It was basically a jewelry counter, but it was filled with games. They also had awesome kiosks with SNES consoles in them, as well as Nintendo Power kiosks that played game trailers so you could see what the hot new games were.

I remember getting the NES versions of Tetris and Dr. Mario when I was just an infant. I don't think I was even able to walk at that point. I just remember my dad buying them for me. If I was in the store I could probably point out where the purchase was made. 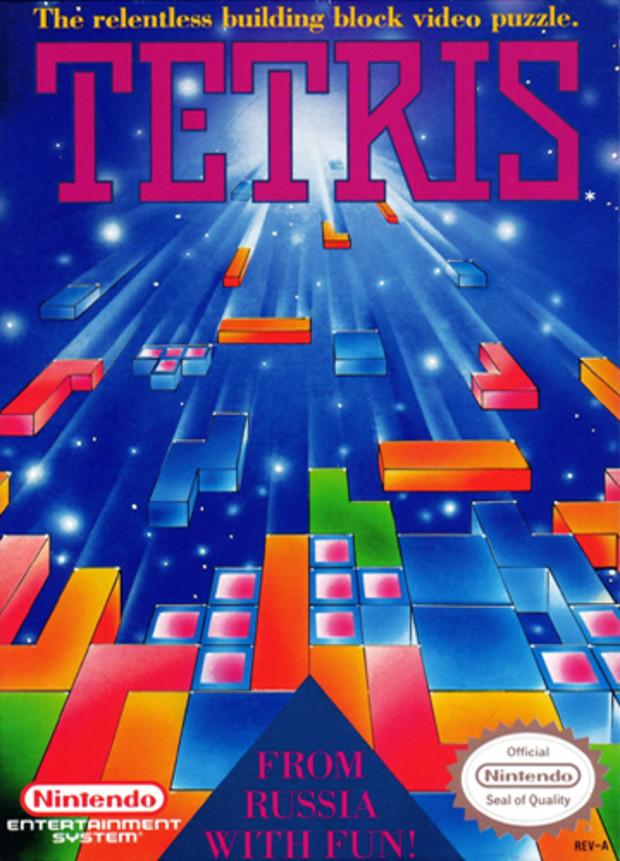 To this day, I still prefer the NES version of Tetris to the Game Boy version, mostly due to the fact that you could see the screen on the NES version. The Game Boy version, like nearly every other game on the system, suffers from the fact that the LCD screen is not great. That's more or less a universal issue with the Game Boy, however. The best solution to this is to either play on a Game Boy Advance, a Super Game Boy, or get a Game Boy Kiosk. But that's impossible, of course. The NES version of Tetris is fundamentally identical to the Game Boy version, except there isn't any multiplayer (like anyone used a Game Boy link cable before Pokemon...), and that iconic Tetris theme isn't in the game, for some reason. Still, there is a reason why I test every NES I come across with Tetris. It's good. And addictive. 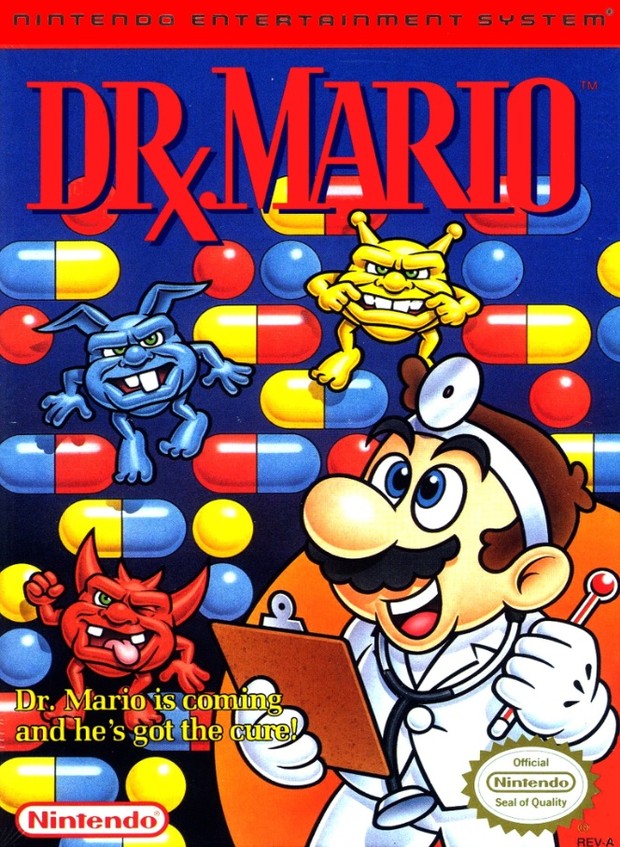 Dr. Mario is a fantastic game, but it wasn't me who played this the most in my household. That honor belonged to my mother. My mom didn't play too many video games, but she was a hell of a lot more willing than my dad was in the grand scheme of things. It's odd, because while my dad was the big fan of tech products and gadgets, he didn't much care for video games. My mom actually played a little bit. She was by no means a gamer, but every few months, she'd pop in Dr. Mario and six hours would pass in an instant. I think she liked it because, as a banker, my mom could appreciate a game where you had to think as opposed to something with mindless violence, like Double Dragon or Contra.

The same sort of thing happened when I got my Super Puzzle Fighter II Turbo machine, but that's a story for another time.

I also remember getting Mario's Time Machine from that particular Sears. I don't know the circumstances of why my dad bought me the game, I just knew that he did. There wasn't necessarily a reason for it, of course; My dad loved me so much that he probably would have bought the entire case of games for me if he could have found a way to pay for it all. 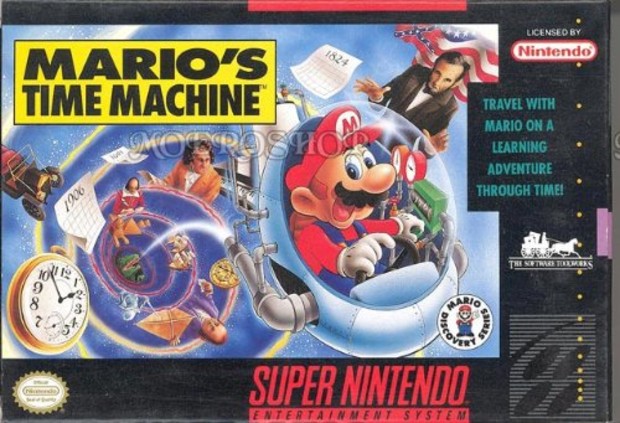 Mario's Time Machine was a new Mario game in a time when new Mario games didn't seem like they were just around the corner. Much to my disappointment, the game is, unfortunately, an educational game. Mario's Time Machine made by one of my favorite companies, The Software Toolworks. They are, sadly, defunct today, but back in the 1990s, The Software Toolworks was pumping out educational software as if their lives depended on it, which was probably fairly close to the truth. They are also responsible for such gems as Mario Is Missing and the Miracle Piano Teaching System. Now, I don't hate the fact that TST primarily made educational games, since I really do believe that we need educational video games: Games are an amazing tool for both teaching and learning, and creating such titles with the intent to enhance someone's knowledge about a particular subject is a noble endeavour indeed.

It's just, uh... Well, it's Mario we're talking about, here. Mario wasn't created to educate people. Mario was created as a video game character. Shoehorning in educational elements to the Mario world just made a game that isn't any fun to play. In Mario's Time Machine, your main task is, essentially, to travel to particular time periods, fill in the blanks on a bunch of middle school homework assignments about particular historical periods, and return important relics to their proper time periods. It barely teaches history, and the few real game-ish parts of the title are not that fun to experience. If you're looking for a game to educate, games like Odell Lake, Math Blaster, Number Munchers and Oregon Trail have definitely aged better.

It's a cool idea, though. I think Nintendo should visit this particular idea in the future: Think of how awesome it would be to see Mario travel through the various stages of his history! You could have a huge team-up at the end, with Marios from SMB, 2, 3, World, RPG, 64, Sunshine, Galaxy, 3D World, etc... teaming up to fight multiple Bowsers in one huge showdown! Think Sonic Generations, but with Mario. And have it actually be good.

Sorry 'bout that. That last paragraph sounded like a letter to Nintendo Power, or something. No matter.

Mall culture has more or less gone away for us. It's kind of a shame, because so much of our real culture was derived from these giant shopping malls. They were always places to socialize as well as shop. You couldn't live a week without going to the mall in some capacity. That was always my go-to plan with my dad, because at the mall something was always happening. You never really had a boring day. And some of my fondest gaming memories were created at my local mall, since stores like Babbages, Electronics Boutique, and Sears were the purchase sites of some of my favorite games. I just felt like sharing a couple with you all.

And y'know what? On Thursday, I start working at that very mall. Fun stuff. Most mall jobs are considered high school work, but in this economy I'll take what I can get. If that means selling cameras and tablets in the mall, then I'll do it. One step at a time. I'll have that highrise penthouse apartment and the hot tub full of cognac soon enough. In the meantime, it'll be neat to walk into work on the same path where I used to walk for fun.