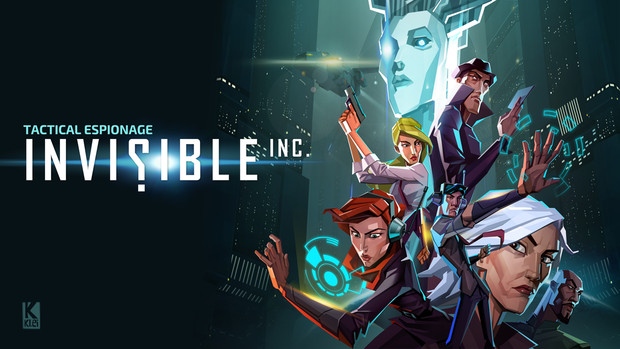 I just finished the Invisible, Inc. campaign on Expert difficulty. The exhilaration was so intense that I just had to write about it.

I've already written about it being a great game. And since it's on sale, I figured this was a good time to talk about my nail-biting, make-it-through-the-skin-of-your-teeth campaign experience. I also wanted to provide a few tips on how to play. It is a very difficult but very fair game, as long as you know the details of the mechanics (which I am here to provide).

If you are new to the game, here are a few mechanics that you should be aware of - 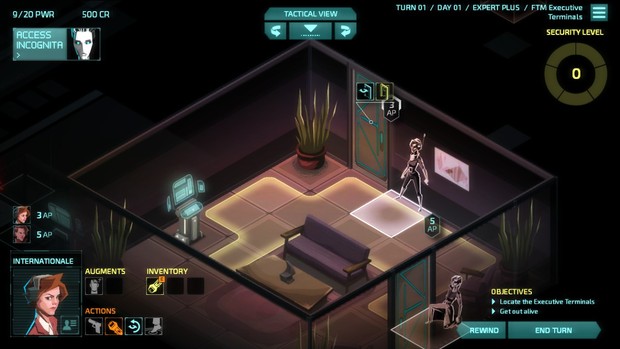 Stand beside the door. 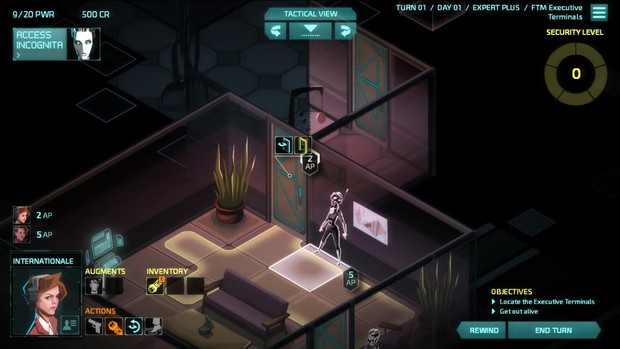 Take a peek. The area behind is clear, so we can open the door. 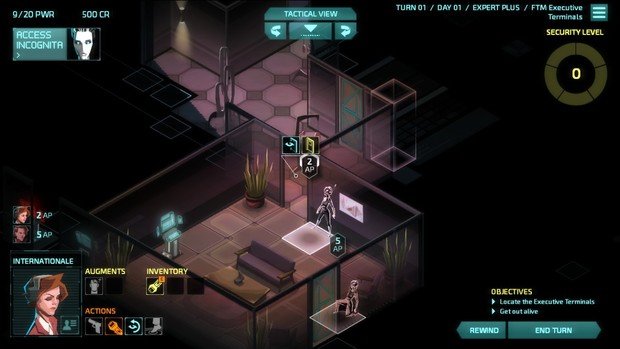 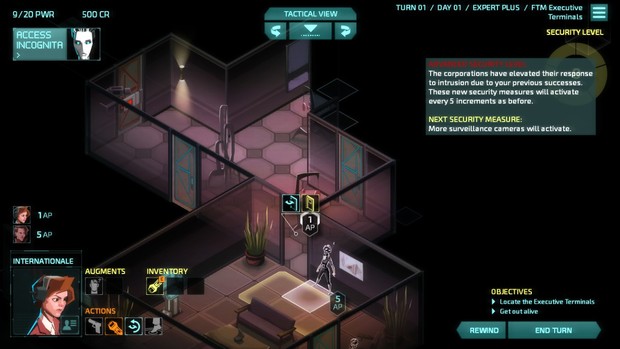 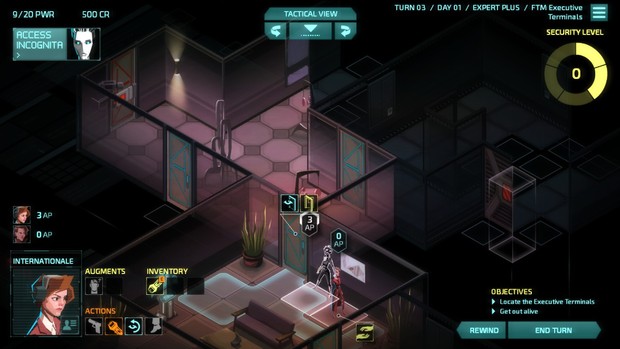 Close the door. The view is still there.

The above are the mechanics of the game. I also have some general advice to make the ride smoother -

The Final Mission (no spoilers) 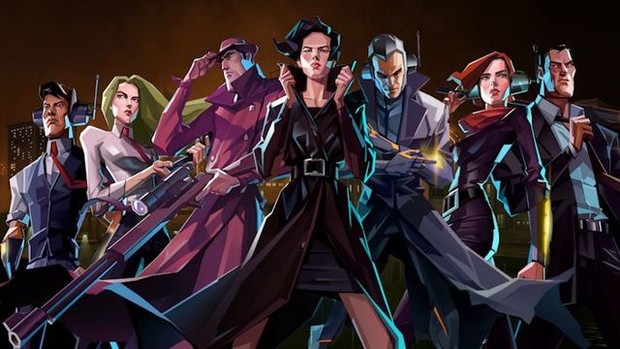 I hadn't expected to finish the campaign. I had played the game three times when it was on Early Access, losing badly twice and barely making it through the third time. In the final release of the game, the last mission was changed to be much more difficult. So, I had no real expectation of getting to the ending in just one playthrough. (For those unfamiliar with the game, there is no save/reload mechanism. It is perma-death, though in Expert setting you get one “Rewind turn” per level.)

When I reached the final mission, I knew my agents were greatly unprepared. One of them didn't even have a standard-issue KO device. No-one had any armour piercing upgrades or weapons. It was looking bad before we had even gone in.

The start of the mission was terrible. Part of the game mechanic is that the helper AI can have a maximum of 20 power (PWR) and it get +1 PWR each turn. An average turn will require around 3-4 PWR, forcing you to either find PWR from elsewhere or be foolhardy. Well, when I started the final mission, I was forced to use up 16 PWR (!!) in the very first turn.

After that, I expected to lose in every single turn. But I rallied... somewhat. Thankfully I wasn't playing under time-attack mode, so I could take my time with each turn. But every turn, I was hand-wringing, second-guessing, hyper-ventilating. I went to the washroom three times in the span of an hour.

In hindsight, I played that level perfectly. The initial PWR haemorrhage was unfortunate but necessary. I followed all my rules (above) to a the t. And, I have to say, I got lucky. The mission had a two-part objective. Once I finished the first part, I managed to find a perfectly hidden route to leave that area. And after that, all the alerted guards rushed to the first objective (where the alarm was raised), leaving me with just enough freedom to search for, find, and reach the second objective.

And then, once the game was done, came the ending cinematic. It was amazing! It was... very Klei. I have played Mark of the Ninja, so I could see the similar authorship in the ending. I loved it, though I'm sure other people will have more polarized opinion.

Overall, my experience with this game was easily 9 out of 10 for excellence in game design. The tension permeates the narrative and gameplay equally. The opening and closing cinematic both have a delicious twist. The number of items/agents combinations, along with robust procedurally-generated levels, will keep me coming back for multiple playthroughs. The only thing iffy is that some of the game mechanics have to be learned by trial-and-error. But then, that's what the rewind button is there for.

Do check out Invisible, Inc. (on sale now on Steam). Oh, and Klei, you and I should work out some sort of PR deal, since I seem to be doing a lot of free promotion for you anyway.

[PS. My intro blog was postponed because I got really excited about finishing Invisible, Inc. Also, this is a kinda awkward time in Dtoid to do an intro blog. Think I'll wait a week, hoping for the community and the site design to stabilize.]