My collection of stuff - part 1: Hardware and games

Hiya there, fellow visitors of Jabberwock (guess what game I'm playing at the moment). It's time to share some things with you. Some really personal things: my collection of random shit I've amassed over the years as a gamer and anime fan.

Every now and then I run out of room to store my things in a presentable way (read: to not trip over everything) and basically get forced to clean up my mess. While hardly my favorite activity, those unfortunate moments provide me with a great chance to immortalize my heap of rubbish for future generations of Extatixes. Not that there will be future generations of me, but that's beside the point.

I'll be sharing my collection and waste of money with you over the course of several blog posts. At first I thought about doing one single blog post, but that'd be way too much pictures at once, so I chopped it up. First up is hardware and games. In the near future I'll do one on my anime & other dvds; one on manga, comics & books; another one on figures; and yet another one on whatever is left.

In no way this is meant to be showing off. Not that it's anything to brag about anyway, but I just want to give you a small look into a part of my life. Hope you'll enjoy it! 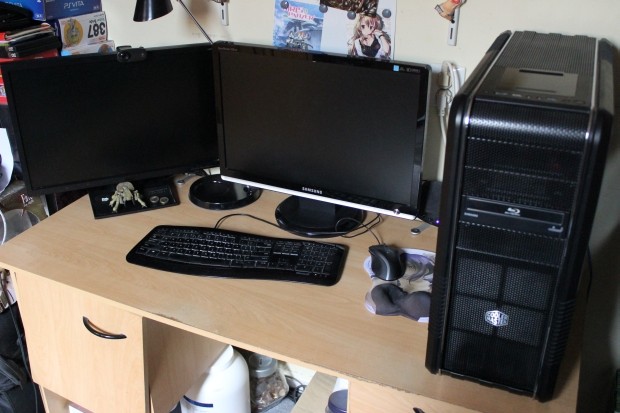 The system's name is Misaki. Named after the protagonist of Kaichou wa Maid-sama!

I don't spend a whole lot of time behind my pc, so I don't have a clue why Yoruichi's right breast is dented. 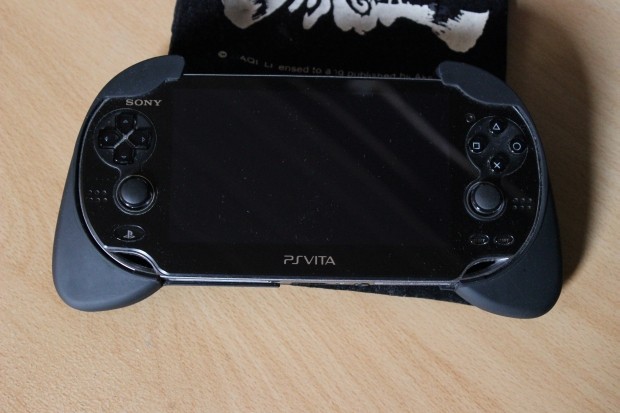 Out af all the "systems" I own, the PlayStation Vita might see the most use. The PDP Trigger Grips make playing on the Vita for hours on end way more comfortable and I probably wouldn't play on it as often as I now do if I hadn't purchased them. 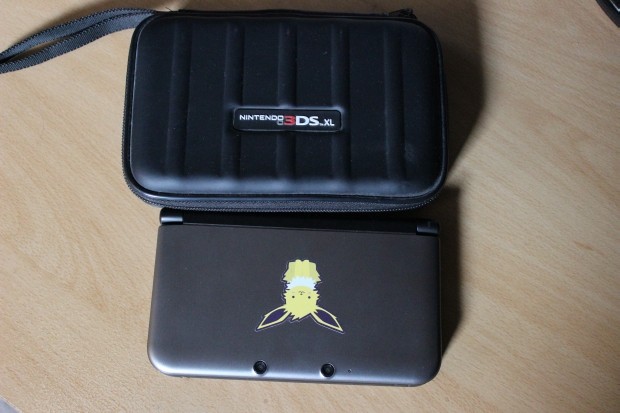 I bought the Nintendo 3DS XL after receiving brain surgery and somehow the thing's therefore special to me. I don't use it all that often, though. To be honest, my hands get tired rather quickly while playing on it, so that might've something to do with it. 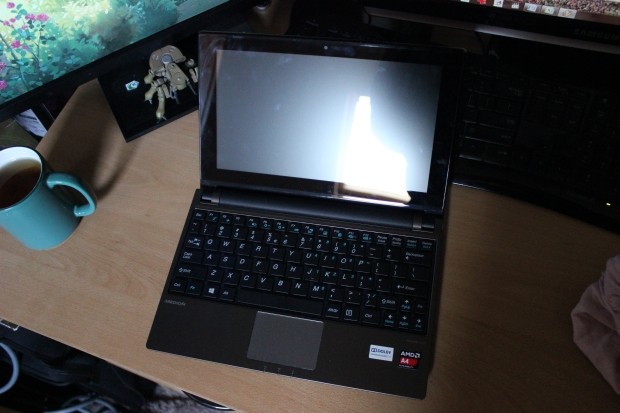 A 10" netbook with touchscreen. Nowadays the thing sees not much use, but back when I commuted to work by train, I used it pretty much on a daily basis to play visual novels and write blog posts. The first thing I mentioned isn't always a good idea when there's people around you, but whatever. 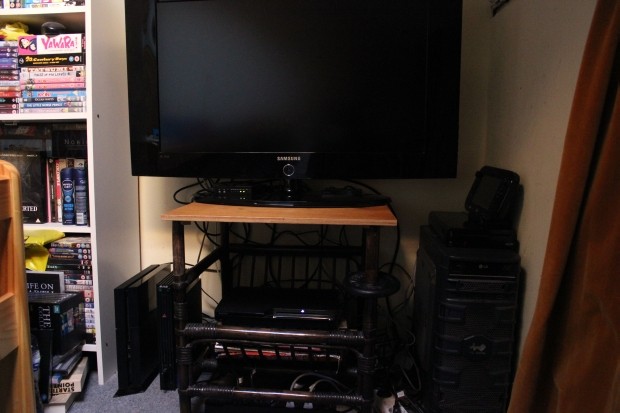 A rather dark corner in this room hides my consoles. The stuff on the left will be covered in a later post. 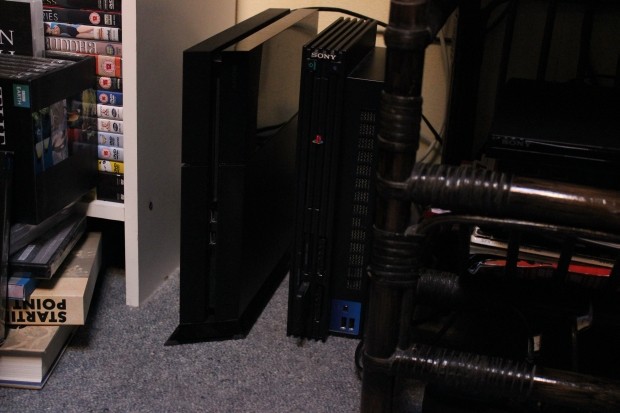 My PlayStation 4 & 2. It seems like I should clean my PS2 one of these days. 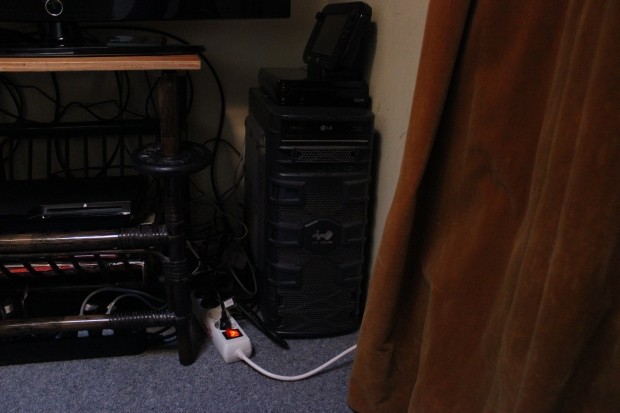 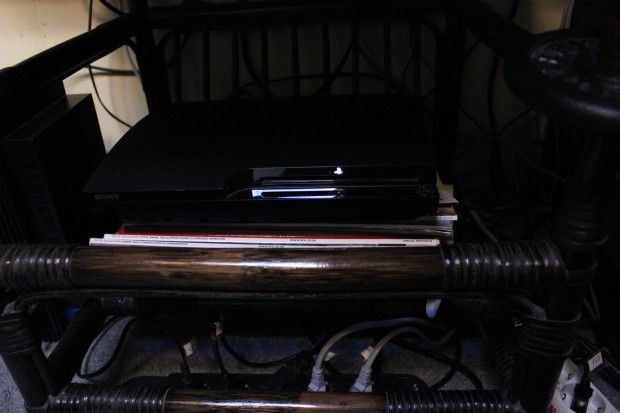 Barely visible, but this is my very first console: a PlayStation 3 (on top of stash of anime magazines.) 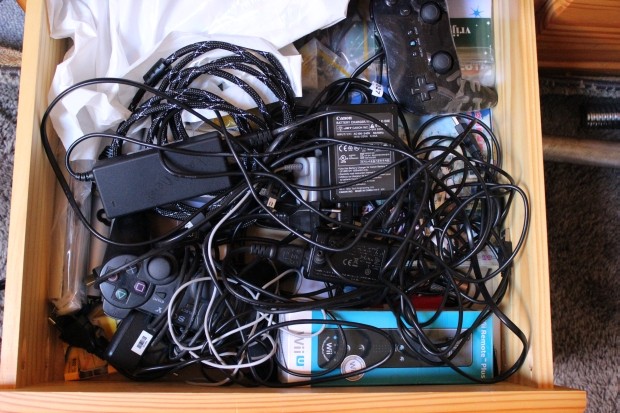 The bane of everyone with multiple systems: cables, chargers and spare controllers. The Wii Remote Plus I bought for the sole Wii game I own. It's a bit weird to have this backward compatibility but having to use the old controllers.

Missing in this picture is my Wii U Pro Controller. 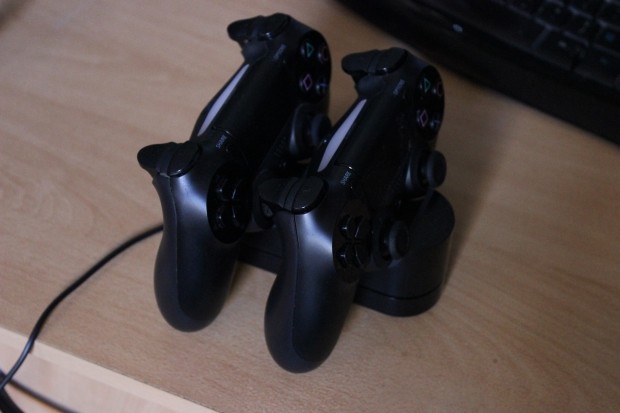 I absolutely love the Dual Shock 4, but the battery life is terribly shite. Since I don't like to have cables all over the room (they belong in a drawer), I actually bought a charging cradle. 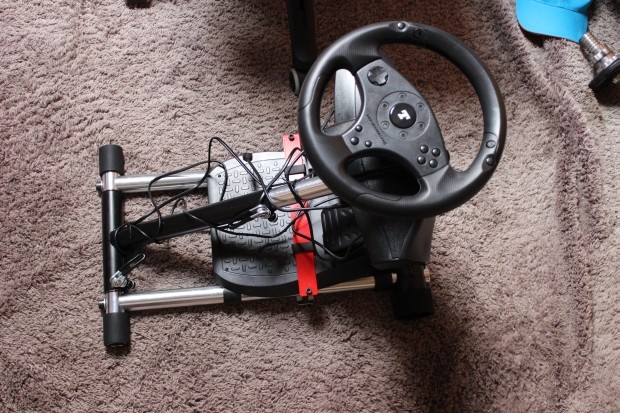 The newest addition to my ever-growing army of the undead collection: a Thrustmaster T100 steering wheel on a Wheel Stand Pro. The stand's pretty sturdy. And foldable, so it doesn't take up all that much space. If you like racing games but don't want to spend all that much money on a cockpit, I think a Wheel Stand Pro is a pretty decent investment. 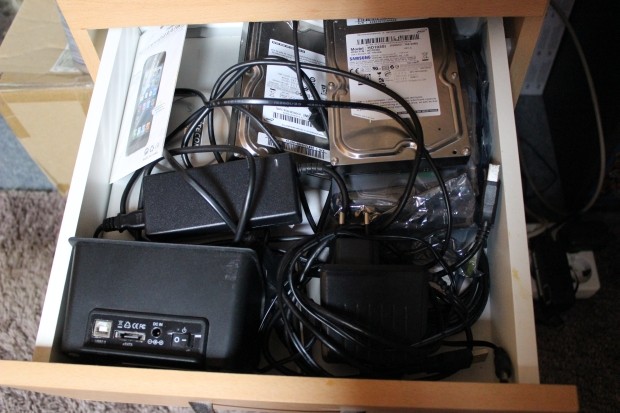 Some HDDs and a docking station for said HDDs. 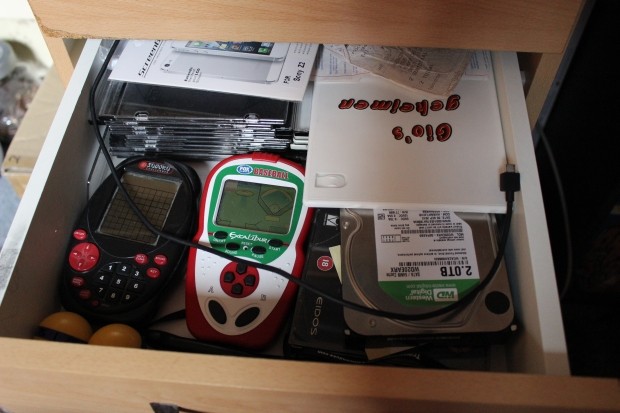 Another HDD and two terrible handheld things. Sudoku is fun at times, but the baseball one is truly awful. Picked it up at as baseball tournament while rather intoxicated. I should also have a Star Wars handheld somewhere, but it's probably in a box with my Star Wars Lego. 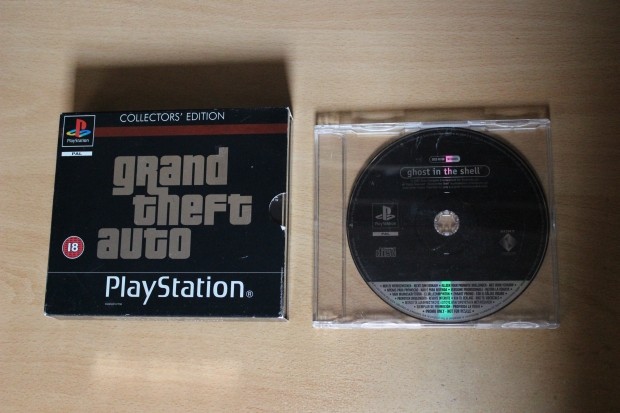 Picked these PlayStation games up for a small price, but I need to get a memory card before I commit to actually playing these. I'll have to get used to the controls in GTA, but man, that game was fun back in the day.

The Ghost in the Shell game I picked up because it's anime related and as you'll see below, I have a tendency to purchase those kind of games. 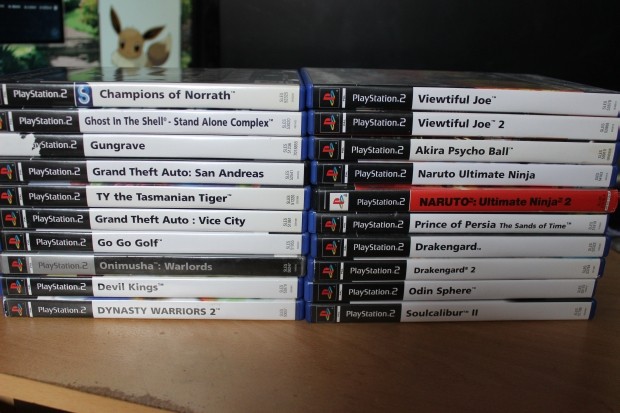 PlayStation 2 games. I think I can blame Nekro for the Drakengard games. The GTA games, TY the Tasmanian Tiger and Go Go Golf came with the system when I bought it off a co-worker for a decent price. None of the controllers he had worked, however, and the memory cards weren't alive anymore either.

There are still a bunch of games for this system I'd like to own, but titles like GrimGrimoire and Rogue Galaxy are rather hard to find over here.

Once I finish with Ni no Kuni: Wrath of the White Witch on the PS3, I plan on playing the Drakengard games. The first one I played for an hour or so, and it feels a bit like a Warriors game, which is actually a plus in my book. 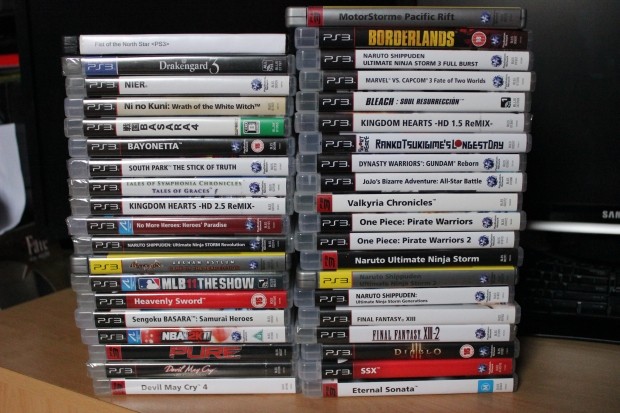 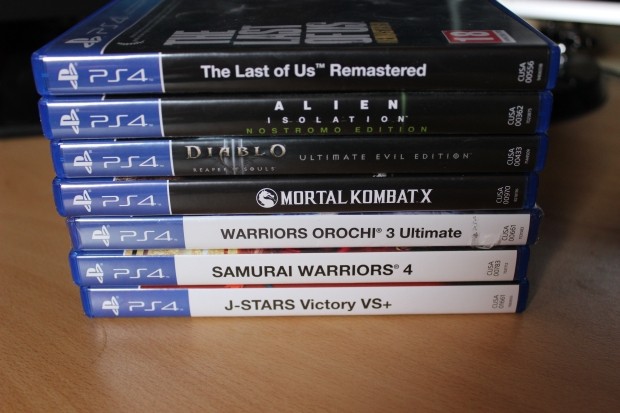 Not the most extensive PlayStation 4 collection so far, but it's gonna grow steadily the next couple of months with One Piece: Pirate Warriors 3 and the next installment in the Naruto Shippuuden: Ultimate Ninja Storm on the horizon. Might give Bloodborne a shot too. 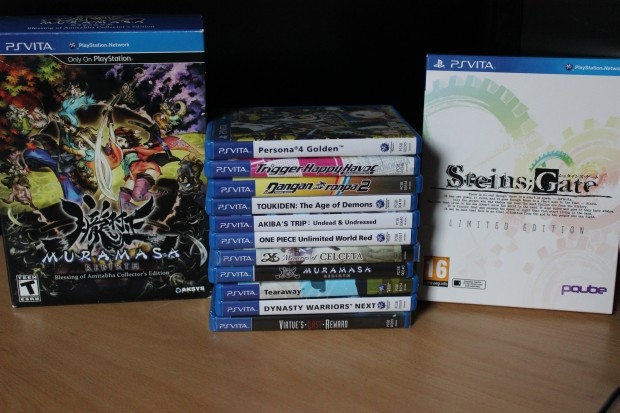 I imported the Muramasa Rebirth Collector's Edition from the US, only to find out the DLC in Europe only works with a digital copy. Since I don't like to switch between accounts on the Vita (too much hassle), I simply double-dipped. The DLC's worth every penny, by the way.

Dynasty Warriors Next isn't a very good game. The core gameplay is okay, but the Vita's touch controls are shoehorned in and make the game a chore.

I have a lot more games digitally. Really a lot more. 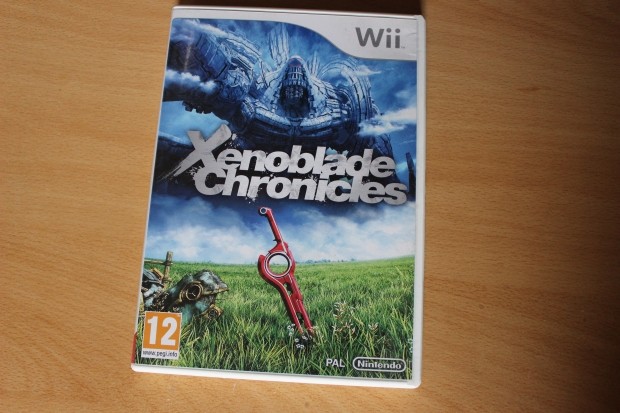 Like I mentioned earlier, I own just one Wii game, but it's allegedly a great one. Quality over quantity, I guess. 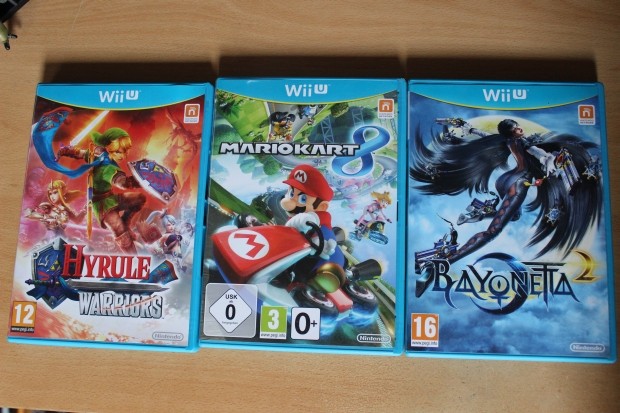 I don't own many Wii U games. The ones I have I really like, though. There aren't many digital games on my system either. Just Monster Hunter 3 Ultimate, Earthbound and the two NES Remix games. 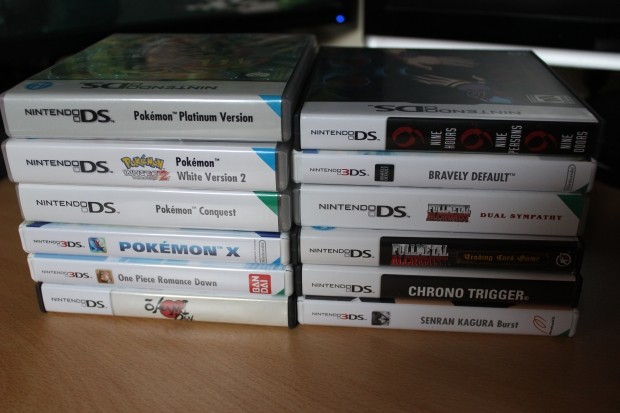 Some Nintendo DS and 3DS games. One Piece Romance Dawn is a terrible game. I really like the anime (despite its horrid pacing), but this game is so fracking boring. Also, I should play Chrono Trigger already. It seems that people have nothing but praise about that game, which is the main reason I bought it. 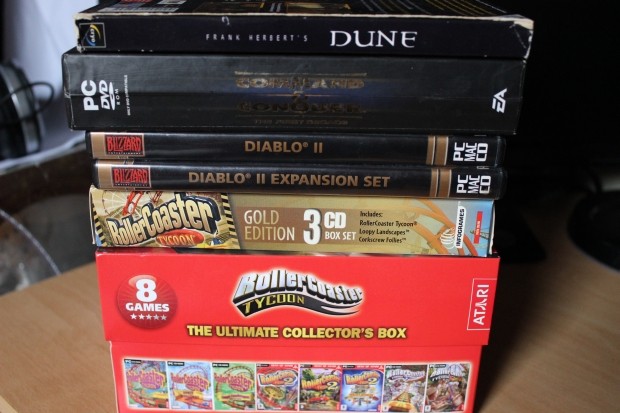 Oh, right, pc games. Remember those days when there weren't things like Steam?

I really, really like RollerCoaster Tycoon by the way. Give me the Drexler patch, a big patch of (flat) land, every attraction available and practically unlimited money. Great times are to be had. 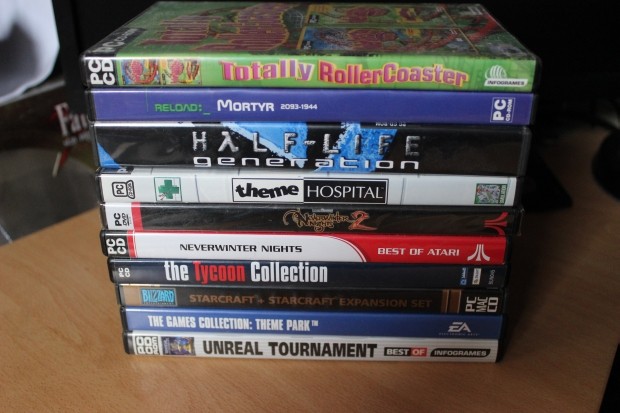 Yet another RollerCoaster Tycoon collection. I sure love(d) that game. Theme Hospital might be my most-played game amongst these, however. Nothing beats a bunch of people puking all over your hospital while you rush to get them treated. 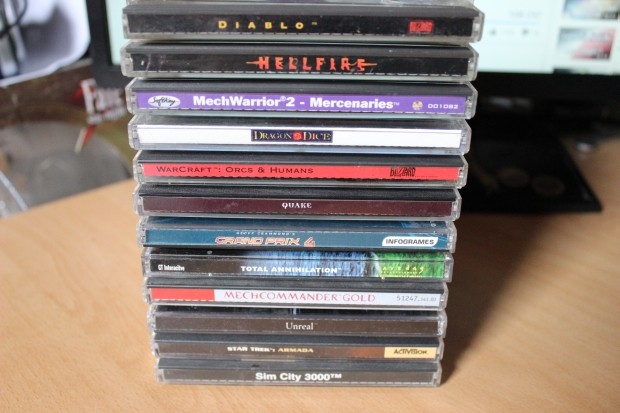 Random assortment of pc games. Played the f*** out of Diablo and Grand Prix 4 back in the days. Heck, I still have a Diablo save game with one of my heroes from back then. He can't even gain experience until the later levels and manages to walk through the first few levels without any gear and weapons without dying. 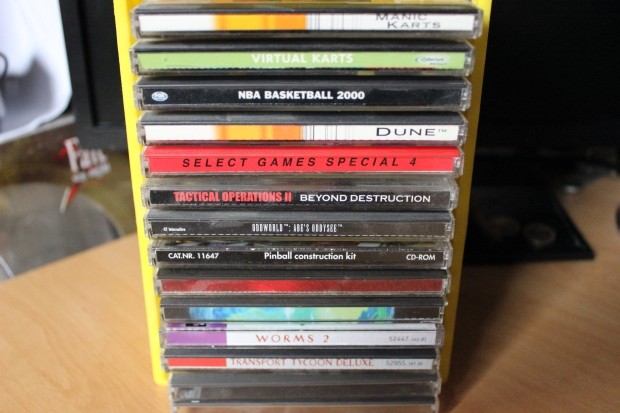 More random pc games. Frank Herbert's Dune's amongst my favorite books, so I couldn't pass up on the game. If I remember correctly, I started playing it and quickly died in the desert. Never played it again for some reason. If I can get it running on Misaki, I might give it another shot. 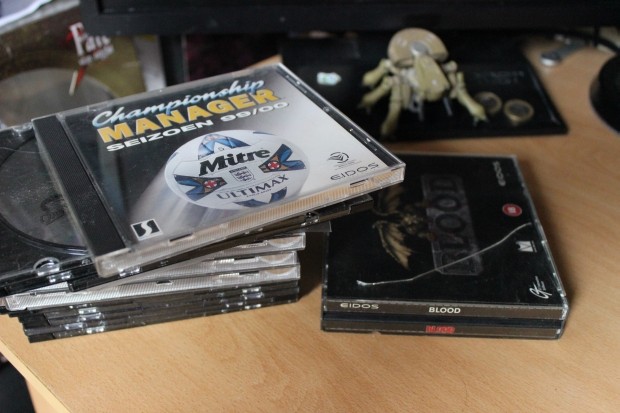 And more random pc games. I like Blood. Such a fun FPS and I usually don't really like FPSs (and suck at them). 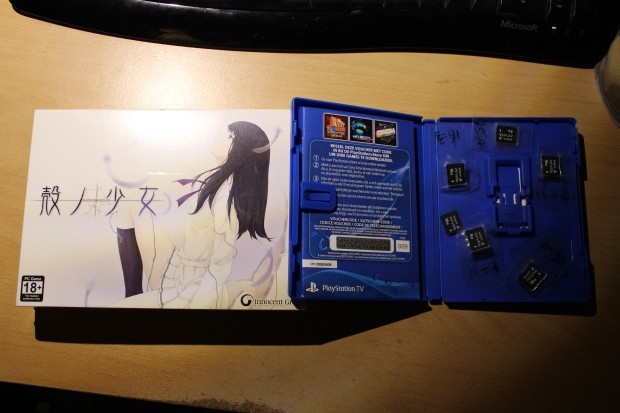 I own several visual novels, but this is the only hardcopy I have. It's by far my favorite visual novel of all time too (Kara no Shoujo).

Next to it the most expensive part of my collection: Vita memory cards. Seriously, f*ck those prices. Recently I picked up two 4 GB cards for € 5 each. Still too expensive. 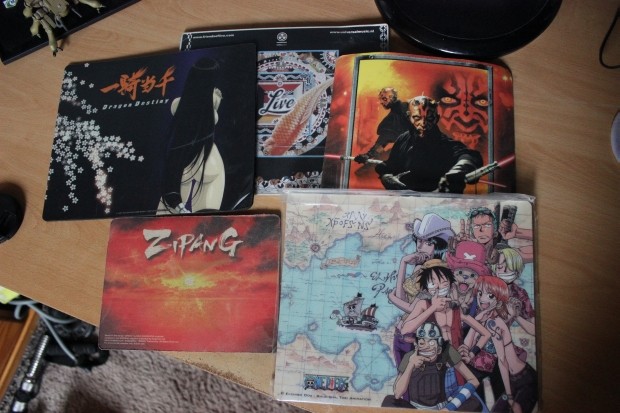 "Bonus": some mouse pads. Kan'u has a great butt.