A fae falls to the dark side...

It's been that kind of week for me. Not only did I get to enjoy the stress and tedium of job interviews and filling out more applications, (because what the fuck is my resume for again?) I had some sort of reaction to a really nice vegetarian chili dinner that ended up bloating me something fierce and made it hard to breathe for about a dozen hours. I looked up some home remedies and tried them, but neither were quick fixes so I was in for a miserable Thursday.

Then my sister and brother-in-law had to drop by because they're moving into a new living situation and need to use my apartment as storage because family. Since it's just me here right now, I didn't have too much of a problem with it, but they did kick up a lot of dust in places I don't vaccuum much. So just as I'm getting back to breathing normally the dust kicked my allergies into overdrive, leading to a nice case of hay fever, making for a wonderful Friday and Saturday.

I'm now in the sinus infection phase of coming down from said hay fever, meaning when I exhale now I sound like a dying, shrunken Wookie. The only good that has come of all this is my sister and brother-in law emptied out their entire pantry and handed it over to me because they either had no space for it or much of it would spoil in transport to the new living space if allowed to thaw. Free food is a good thing.

So there's a silver lining to all that physical misery. Well, that and I settled into focusing on Knights of the Old Republic and MGS3. I guess cinematic games are better at getting my mind off whatever ails me.

My situation affected my replay of Knights of the Old Republic rather substantially. This is actually my second time playing through the game - the first being long, long ago on a chunky Xbox far, far away - and this time I told myself I was going to be good all the way through, a Goody Two-Shoes for the light side of the Force. I even thought long and hard on a nice sounding Star Wars name, fit for a smuggler turned do-gooding Jedi:

I needed a fairy reference somewhere.

I also defaulted to the character model I originally used over ten years ago. I've said this before, but once I've settled on a look for my characters, I just can't bring myself to choose another. I like this one: 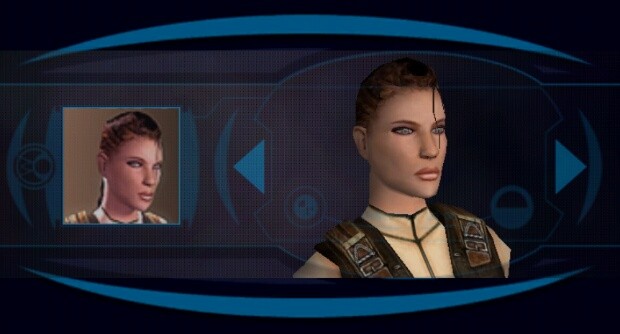 As you can see, Cyndel scowls by default. This is not the face of Jedi serenity, peace or compassion. This is the face of a lady who is sick and tired of your shit. It's a lovely face, but one that is bound to invite me to unleash my inner bitch.

I have to admit the entire planet of Taris pissed me off, too. It reminds me too much of being stuck in Midgar in Final Fantasy VII, so when the Sith bombarded the hell out of Taris just before my daring escape from the planet, I was kind of rooting for them. By the time I got to Dantooine and met the Jedi Council, my persuasion skill was high enough to lie my ass off and get me on the path to the dark side real fast.

I turned Juhani away from the dark side, though, mostly because I knew she'd join me later and I wanted her lightsaber so I could dual wield them sooner. I've gotten more lightsabers since she joined, but now that I can have HK-47 in my party I'm wary of giving another spot in my party to a Jedi. I figure there is one slot for HK-47 and the other is for tormenting Bastilla and Carth or having Canderous agree with HK-47

I've been making every bad choice I could since then, breaking up star-crossed lovers within their families' feuds, stealing from the poor, threatening people and all that dark side stuff. I don't always kill everyone, though. Everyone's always saying how the Dark Side is a bad thing, but I get money faster, I'm on my way to having two kickass purple lightsabers and I think my yellow eyes look pretty awesome.

Samuel L. Jackson proved purple lightsabers were the best because Mace Windu was the best reason to endure the prequel trilogy - that and the Yoda/Dooku lightsaber fight. Margaret and Elizabeth from the Persona games have yellow eyes, which have that "come hither so I can wreck your shit" quality to them. Yellow eyes don't mean you're evil, just that you're a sexy megaboss. So purple lightsaberz and yellow eyes says you're a sexy, badass megaboss.

But Cyndel is evil. She will ruin your auditions, take your hunting trophies, assassinate people and carve her name into your back with a vibroblade. I'm just amazed everyone still implicitly trusts her this early on. She doesn't look trustworthy. 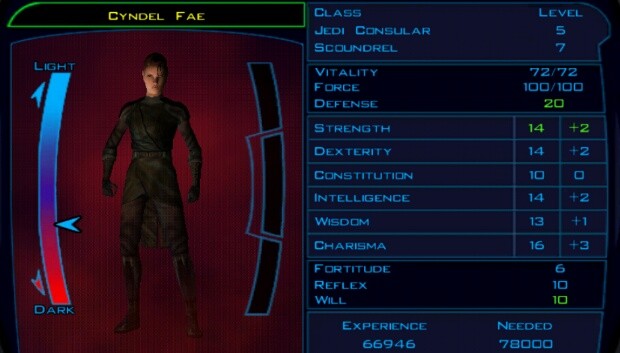 Anyway, I'm on Manaan talking to fish people and watching the Republic and Sith soldiers bicker at each other. I forgot this place was neutral so no Dark Jedi are going to jump me here. I want to fight more of them so I can find a second violet lightsaber crystal. Turns out those don't come up often. I guess I could just leave, but then I remember BioWare has never been that great at making good quest journals so I'd better just finish up what I can while I'm on Manaan.

Still... purple lightsabers. I want them. 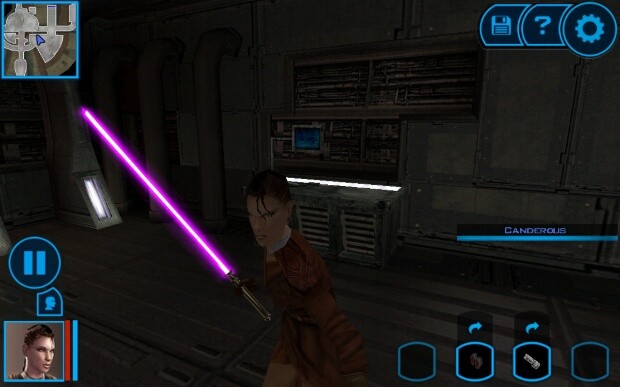 At least my mind is off feeling like crap for now. Being evil isn't all bad if it makes you feel better.