Yesterday I did something I haven't done in many years and filled out a character sheet for Advanced Dungeons and Dragons. Starting a campaign in the most recently released 5th edition I have had the roleplaying bug. After many years of relative dissatisfaction with the D&D brand, 5th edition resurrected my interest. Pathfinder was a fine distraction, but I was just waiting for D&D to get back to its roots, and in many ways 5th edition did that successfully.

But there is a difference in tone. There was something magical, arcane, and forbidden about Advanced Dungeons and Dragons. The Satanic Panic in the eighties which trickled into the early nineties was largely responsible for this mystique, giving the game a sense of the forbidden; if you played it, you were a devil worshiper, a potential murderer even, and in the media the game was portrayed as being problematic. With demonic entities pictured on the covers and a game that practically encouraged moral ambiguity due to its deeply embedded tone of Swords and Sorcery, clearly emulating fiction more akin to Conan than Lord of the Rings (you are a cutpurse, a thief, and a fighter; not a hero seeking to save the world) parents were heavily concerned with the implications that had on their kids, and what it might inspire them to become. 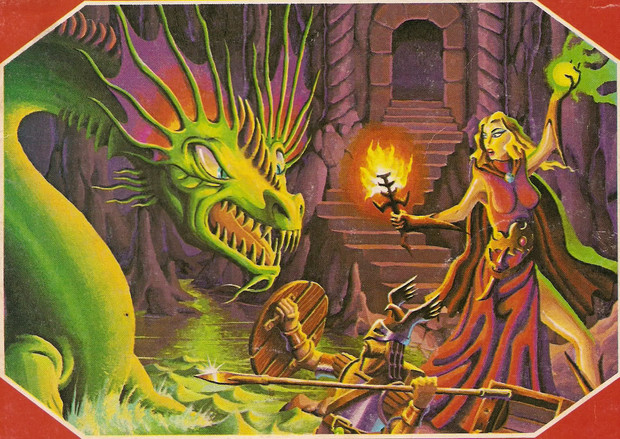 A Life of Adventure

My childhood was dripping with this stuff. Not only was I deeply obsessed with D&D, eating up any opportunity I could to play, but we played with Ouija boards, performed seances in the woods, and practiced Witchcraft. All of this came from a place of complete boredom living in a town in the North with fuck all else to do. Any sort of excitement, even the excitement of scaring the shit out of ourselves was necessary to staying sane in a town full of people into fishing, hockey, and hunting. We wanted epic fantasy adventure, a life that was full of exploring and intrigue and danger.

So when I sat down with my four year old daughter yesterday and she asked, "Daddy, can we play Dungeons and Dragons?" I couldn't say no. The character sheet wasn't mine; it was hers.

I'm not one for censorship. There is obviously a limit, but the amount of coddling that goes on today with kids is absurd. On the extreme opposite end of the spectrum, you have people practicing "free range" child rearing and a number of other bizarre practices. I try to avoid all of this nonsense whenever possible and just do what is natural for me. So my daughter sits down and watches adventure movies with me, plays Nintendo, and anything else that she shows interest in. But the most compelling moment for me so far has been her interest in D&D. Because it is a platform that encourages imagination. It encourages freedom of expression and decision making. And unlike a video game which is a static experience in many ways with predefined goals, the outcomes and stories of D&D are limitless, and when utilized properly, can be a fantastic tool for teaching in many different ways.

Kids at this age are creative, but still limited by the typical input granted to them by that which they absorb from their environment on a daily basis. I explained to my daughter in very simple terms using examples of gameplay to describe exactly what D&D was. 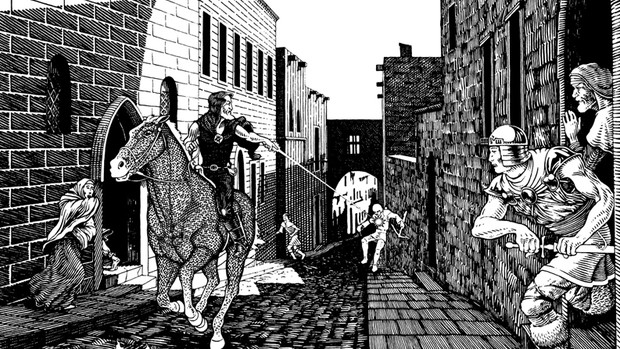 I watched her face light up at the idea of this imaginary world, but more at the idea of choice. The concept that she was in control of this world and could do whatever she could dream up was intriguing. But the idea of finding a treasure in the woods, and the thought of what that treasure might be was too enticing to pass up. This speaks volumes about the innocence and curiosity of kids, and why the original D&D was so effective in grabbing my own imagination as a kid. Sure, an adventure to save the world is compelling when told properly and executed with precision, but what is the end game there apart from some vague notion that the imaginary world you are inhabiting might be safe from...something? The simplistic greed inherent in finding the lost treasure is far more compelling especially as a youngster with no real developed moral compass, and this is the type of storytelling heavily encouraged by the original AD&D.

Once we went through a few scenarios like this, I decided to bring her in even more by printing out a yellow "goldenrod" character sheet. At this age, kids are also pretty easily impressed by such things as colored paper, and apart from the indecipherable jargon strewn across the page which she was interested by but not entirely sure about, there was a little window where she could draw a picture of her character. Too embarrassed to pick up a pencil, she directed me in drawing it for her; her half-Orc knight that she named Bobgoblin from a favorite cartoon had come to life on the page in my own crude rendition. Bobgoblin bore the family crest of a smiley face and had seventy gold pieces to his name - yes, his, another of her choices - a typical fighter who was formerly an Elf before we went through complex process of stat rolling which ruled out the possibility of her playing an Elf. She wasn't disappointed by this, and though I could have easily shrugged and fudged the rules, I try to teach her that life isn't always a grab bag of "anything goes." She decided half-Orc was an acceptable race, which was better suited to the name Bobgoblin anyway, and we moved on. 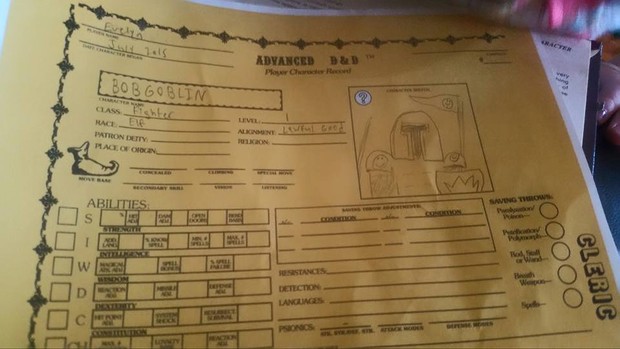 If Advanced Dungeons and Dragons has problems (and it has many) it's that it is obtuse, clearly thrown together in a fairly haphazard manner with little regard for simplicity and straight forwardness. Even Gary Gygax had admitted on many occasions that some of the more obscure systems were not ones he implemented into his own gameplay sessions. Now, it can be easily argued that the current versions of D&D don't really contain anything unnecessary or impossible to properly implement. They work best when all of the rules are being properly utilized, and said rulesets have been honed down to a science. AD&D, apart from its highly open nature, is also open in terms of mechanics. There is a lot there that CAN be used, but it is highly encouraged that Dungeon Masters create their own system of house rules in order to have the most appropriate experience for their own campaigns. We heavily fudged and rearranged rules as kids, and much like Bobgoblin the Half-Orc, left half of our character sheets completely unfilled. We played for the adventure, and the rules were simply a guideline. Dungeons and Dragons 3.0 and and 4 heavily encouraged a progression system of min maxing stat crunching gameplay, picking the best skillset in order to have a superior character. But in AD&D, you were lucky to have an average character at best, and death was not just a possibility, it was an inevitability; expected, and most of all and most importantly to convey the harsh sword and sorcery setting, feared.

There are many ways to play the game, all dependant on the will of the Dungeon Master. With endless adventures available for purchase, pre-fabricated worlds and quests, one of the most common ways to see D&D played is in a more linear setting. As a DM, it's far easier in many ways to create a pre-set adventure with little improvisation where you artificially railroad characters to the next set piece, dungeon, or encounter. But the way we played growing up was much more loose, far more in line with the scattered and chaotic nature of the game rules themselves. We made the world as we went along, and the freedom to go anywhere and do anything was assumed from the get go. This is the way I have chosen to play AD&D with my daughter. As one gets older, a general suspension of disbelief becomes more difficult to maintain, and the holes in an improvisational setting and plot can be easily scoped out and can ruin the experience. At four years old, Bobgoblin will be going on simpler quests, facing simpler challenges, puzzles, and interactions. So I want to use the opportunity to show my daughter as open a world as possible, which is a big part of the magic of the game.

When my daughter gets older, we can enjoy video games and board games together. Games with proper rules used to teach an entirely different set of lessons and skills. We will probably eventually switch to a more modern roleplaying system as well. But AD&D seems to be a fantastic starting point. Because it is oblique, mysterious, incomprehensible and difficult, I feel like it's a great starting point for kids getting into gaming. I still think it's a fantastic system and one that plays so much differently from modern implementations of the game that it is worth a look in its own right regardless of the availability of more refined editions. But time will tell, and today, the adventure of Bobgoblin the half-Orc will begin.

But I warned my daughter. "You need to be careful. The world is a dangerous place. You can't trust everyone you talk to, and you don't have to fight every monster you meet." Like I was dishing out real life advice she sat and listened, and seemed excited by this fact. And the first pair of Goblins she met on the trail she tried to parley with, asking if they wanted to play a game for the gold they were hoarding. 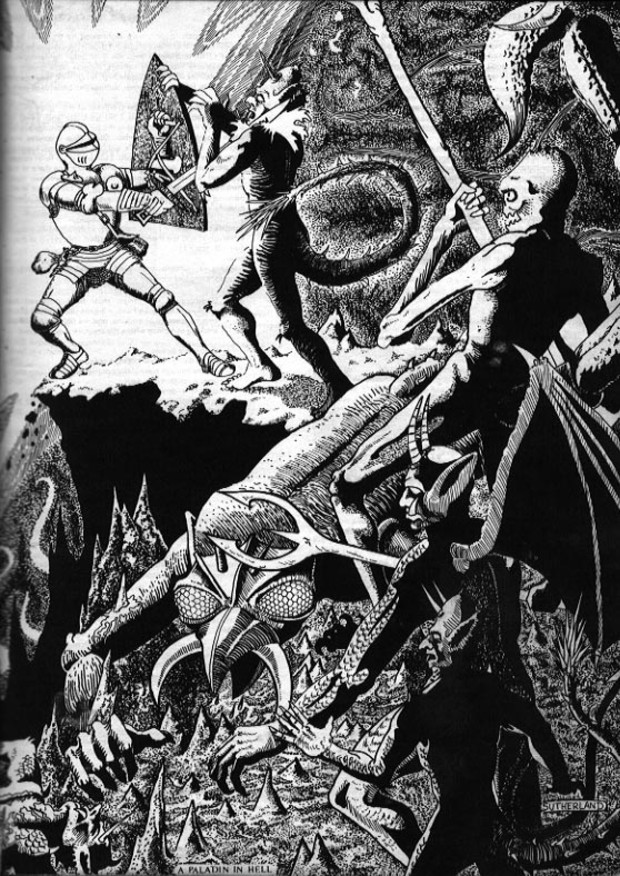 She rolled a seventeen, the Goblins rolled a twelve, and they gave her half their gold.

Bobgoblin the half-Orc took his booty and continued down the trail, learning that not every encounter had to be a fight. And open to a world of possibilities, adventure, and fun, he started toward the dark forest to find the evil wizard and a lost, ancient treasure.