I want to share a part of myself with all of you. Originally I was going to amputate bits of my body and send them all to you via the 11 O'clock Aerogyro, but I've found a simpler, less painful way.

I want to show you Kung Fu Rascals.

Sometimes we find a thing we attach ourselves too. For no particular, meaningful reason, certain things resonate with us. Things we could go our entire lives thinking fondly about while never meeting another person who feels the same way. 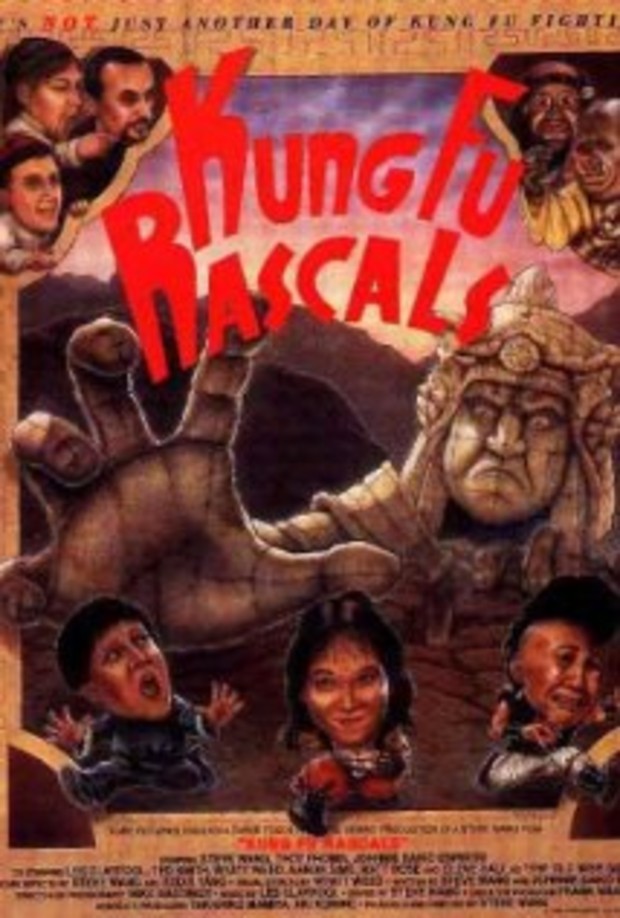 Recently, I just rediscovered a movie I haven't been able to watch in years which has finally been uploaded to YouTube, being very difficult to obtain in any format. Kung Fu Rascals, a movie by Steve Wang. To this day I have never seen it available anywhere for sale, and my VHS tape being long gone, it sort of faded out of my memory for awhile. But every few years I'd remember it, remember watching it dozens of times as a kid (for those of you who follow me, me doing a thing "dozens of times" is a recurring thing; I like repetition in the stuff I enjoy.) and then I'd think to look it up, almost like checking up on an old friend, just to see if there was any new developments surrounding it. And since 1992, there has been barely a word about Kung Fu Rascals apart from a very brief reunion between the starring cast at a horror convention a little while ago.

Steve Wang has a reasonably consistent record of B movies under his belt. Original working in special effects, with movies like Predator and Gremlins 2 on his resume, Rascals was his first feature length film spun off of a short he and his friends put together some years earlier. He'd later go on to do the Guyver films, and most recently in 2009, an American version of the Kamen Rider series. So his track record of martial arts related schlock is strong, and Kung Fu Rascals is a unique little entity that was completely overlooked in its time, though according to Steve, still managed to be profitable.

The movie follows a trio of Kung Fu stooges, Chen Chow Mein played by Steve himself, Lao Ze played by Troy Fromin of Saved by the Bell fame, and Reepo played by Johnnie Saiko who has worked on several films over the years including Stargate. With a limited budget and a fly by night script light on story, Kung Fu Rascals plays like a spoof with a heart; an obvious love letter to the Kung Fu genre with a pretty creative cast of characters, amusing gags and wordplay, and some really interesting costume design despite the low budget.

Set in what seems to be a pseudo, modern day amalgamation of America and China, the Rascals have stolen an artifact called the Sunstone Map and are being pursued by the Sheriff of Ching Wa county and his cohorts Ba Foon and the effeminate Dar Ling at the behest of the dark lord Bamboo Man and his henchman, the pig man Raspmutant. There is a real Power Rangers vibe to it all (Steve Wang would later go on to direct an episode of the series himself) with cuts from the action to Bamboo Man and Raspmutant plotting to retrieve the stolen Sunstone Map, which is known to hide the secret location of a power most...big. Despite the script being thrown together in a week a surprising amount of thought seems to have gone into creating the world itself which though sparse in appearance, most scenes taking place out in the wilderness probably due to cheap shooting costs is teeming with personality thanks to the diverse and funny cast. 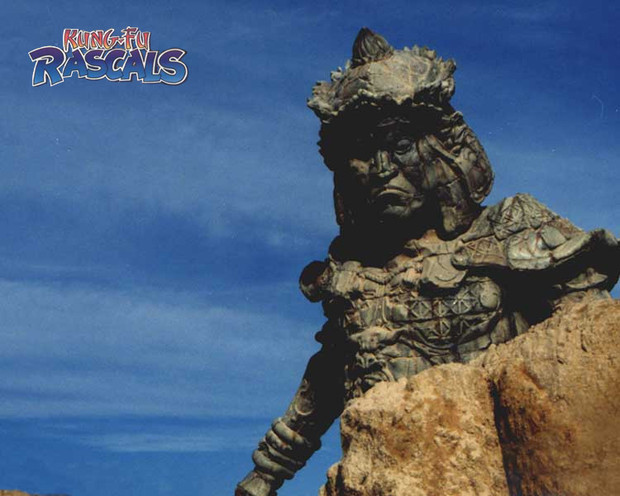 The Rascals have to go to the Old Wise Guy to find out how to pursue the power most...big, to save the Shaolin Temple. The first half of the movie is where most of the characterization and plot takes place, the dynamic between the stoic Chen Chow Mein, the eccentric Bruce Lee wannabe, hairpiece wearing Lao Ze, and the bumbling Reepo taking center stage. The rest of the film has them fighting ninjas, the Sheriff and his cohorts before finally facing off with Raspmutant himself who summons the enormous Neo Titan in a fantastically fun Kaiju fight of epic proportions. The York VHS release attempts to cap off the film with a quick text scroll to complete the plot since nothing is resolved and Steve left it open for a sequel. Ultimately it is a mess, the fighting and choreography is nothing special, some of the jokes fall flat and the music is repetitive. But dammit if it isn't a lot of fun, and it was the movie that got me into the Kung Fu genre.

Later I'd discover Jackie Chan and the masterpiece that is Drunken Master, but this was Kung Fu for me in the early 90's. It's also a film that has never been fortunate enough to be blessed with some sort of grand re-release in the same way other schlock films like Robot Jox have been. Steve Wang has always entertained the possibility of a sequel, and it's something I'd love to see. Despite being given only a taste of the little world of Kung Fu Rascals, I spent a lot of time as a kid filling in the blanks, thinking up stories for possible sequels, and of course, watching the movie over and over again. It's a kids film at heart with plenty of dumb fart jokes, goofy slapstick and purposely bad dubbing. I doubt most adults watching it for the first time (and apart from you lot, if any of you decide to click on the videos, there won't be many people watching it a first or last time these days) will get the same enjoyment out of it. But even after all these years, trying my best to take off the rose colored glasses of nostalgia, it's one of those bad movies that isn't so bad. The heart and the effort that clearly went into it, along with some pretty fun ideas saves it from the bargain bin of movies you laugh at; it laughs at itself well enough, and invites you to join in.

As far as the video goes, the quality doesn't get much better, sadly. This one was uploaded by Troy Fromin himself, and is the original cut of the film before York edited it to be more complete and kid friendly, cutting out a couple of darker, bizarre scenes and adding explanatory text that was not only inaccurate to what actually happened in the film, but which was also completely unnecessary and made the movie, ultimately, feel like it had no proper ending. 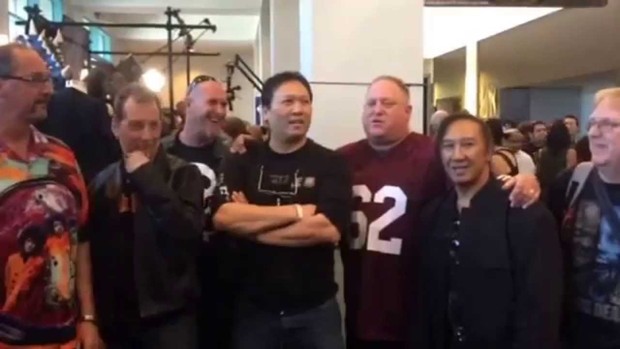 The Rascals, reunited. This almost brought a tear to my eye.

This movie was my childhood. I didn't have friends to pretend to be Reepo and Lao Ze to my Chen Chow Mein. No one I showed it too got attached to it the same way I did, and I haven't owned a copy of it in well over a decade. I can't say it deserves a lavish re-release and a lot of attention. It isn't an overlooked hidden gem which was tragically buried; it was a passion project by a budding filmmaker, written in a week and slotted neatly in the kids section of video stores. But I have a lot of fond memories of it and have always been curious to see if others reveled in the glory that was Kung Fu Rascals.

If not, I invite you to watch and enjoy; just don't set your expectations too high. It's probably not as good as I'm trying to make it sounds. But I love it anyways.