The Struggle is Real

The first time I ever sat and wrote anything was a short story for my Grade 1 class. It was open ended but had to be a retake of the classic Chicken Little story. So I just changed the birds out. That was the extent of my age six creativity. To make the birds different birds, and tell the same story.

I was proud of it though. It clocked in at well over a page and a half making it the longest story in the class. It had taken hours to write, and I wanted to see it through to the bitter end, not leaving out a single detail or opportunity for a joke about bird poop. I was proud of it, and it started an initial (and maybe unfortunate) spark. I knew from that day on that I wanted to be a writer, even though I'd eventually turn out be just a drunk who bangs keys with pudgy fingers and sadness.

You see, I wanted to tell stories. Not just any stories, but stories that had already been told better than I could ever retell them. At age nine, I was writing Robocop fan fiction. At age twelve, I was re-writing Final Fantasy Six with less compelling characters in an unappealing Star Wars ripoff setting. And at age fifteen, I was writing original pieces set in the Ecco the Dolphin universe.

So storytelling never ended up being my thing, but I did a hell of a lot of it. And as far as teachers were concerned, I was ahead of the game; producing crap, yes, but crap that was a step above the crap everyone else was writing. I got the highest marks in my creative writing classes. I only passed English thanks to the last project of the year being open ended. Most kids handed in a duotang of this or that. I handed in a binder with fifty hole punched pages, all of them filled with words.

He never said it was good, but he acknowledged my persistence.

There was a blockage, though. Something that always prevented me from moving on and really throwing myself out there. A reservation always held me back from sending my work too far out THAT WAY. It could float a bit this way, maybe over there, but I always wanted the ability to real it back in. I didn't want it out on open waters where the sharks would come and rip it apart.

I was afraid of being told I was no good.

I never excelled at anything else in my life. I was shit at sports. I tried to take computer programming and failed miserably at that. Graphic design was as alien to me as Jupiter, and I would have flunked my photography class if our teacher hadn't bribed us all with good marks so that we didn't go to the principal and rat on him for making a literal pussy joke when he was showing us his photographs of a woman holding a cat. (True fucking story.) Writing was all I had, and I felt for a long time that it was my identity.

You aren't what you do, and you aren't what you write. But I so closely associated myself to that skill that I couldn't bear criticism. I had never really been criticized, but the idea of it scared the living shit out of me.

When I finally did get over it and started hurling my work into the viper pit, it was every bit as horrible as I'd imagined. Some people were brutal, and even unfair, and I couldn't abide it. I lashed out like a spoiled child and defended my work tooth and nail. I finally got a really good piece of advice privately from someone that was moderate in tone; listen to what people say, but don't always assume they know best. Look at your work as objectively as possible. Sometimes people are being unfair, but most of the time there is at least a kernel of truth to their words. And if there isn't, take it anyways, and try to improve. 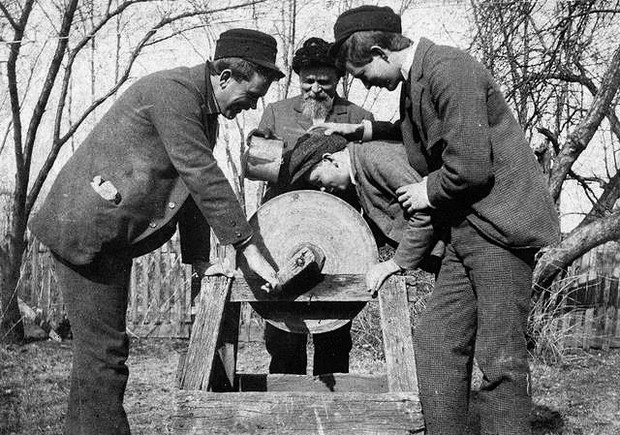 I slowly found my niche in essay and blog writing. Stories just weren't working out. Even recently, six months ago, I made a concerted effort to peddle a dozen or so fiction pieces without any luck whatsoever. If I had anything creative to say fictionally, it just wasn't appealing to the people that were listening. And, quite possibly, just wasn't any good.

When I started my first blog it came with a mountain of praise from people who I respected. And at first it was a good feeling. But that same little kernel of advice shared with me filled me with doubt. What if these people didn't actually know what was good? What if they are just saying it to build me up? What if they're full of shit? What if they have no idea what they're talking about?

So I started searching, seeking out, begging for "objective" criticism. And the only criticism I got that I put any stock into was the negative kind. It became a sort of challenge to find someone who hated my work so I could analyze their thought process and see how it applied, discover how I could improve. Then came an endless hill of dissatisfaction where, even upon writing a piece that was very well received, the thrill of the moment would wear off and I'd trash it, quite literally; my current portfolio is mostly made up of things I've written in the last few years because most of my work doesn't exist anymore. Even my old Destructoid blog, likely comprising well over fifty posts, is gone for keeps. If I was writing good stuff, it didn't matter because it could never be good enough. And in my mind, it wasn't worth holding onto garbage.

But recently there was a change. Like a switch had been flipped.

For the first time in my life, I feel satisfied with what I have done. Like I no longer have to be embroiled in an endless struggle for self-validation. I am modest to the point where praise used to make me feel uncomfortable. I feel like I've done a fuck ton of failing. But I now feel, for once, finally, that my work is acceptable. That the things holding me back as someone who can pursue his passion on a career level are semantic, and mechanical; they have nothing to do with coming up with ideas or executing them, but more with understanding how to pitch work, how to network with people, and generally get OUT there.

This is incredibly satisfying. It's not a tangible measure of success. I had always assumed that once I was able to get paid for my work, that meant I was finally "good". That money was the only substantial metric by which one could judge the merit of their talent. That house of cards would crumble when I'd see people profiting off of The Best 10 Dwarves That Have Ever Been Tossed, And I Cried At What Happened Next! articles abound. So for awhile I thought I'd never be able to look at myself and say, "you are successful", because if money was not the penultimate barometer of judgement, than would could have possibly been?

It was me all along.

Sometimes we are our own greatest foe, our own unconquerable obstacle in the way of success and happiness. There are a lot of writers here, a lot of good ones, and I have seen too many who suffer "the struggle"; whether it be confidence in their writing, or just the real life tribulations and problems that get in the way of successful progress in any aspect of life. There is a lot I have to be happy about in life, but I have been the one thing standing in my way of that. And I'll probably always struggle with self doubt. But today I was finally able to look at the collective accomplishments I have made, however minor they may be in the eyes of someone else and say, "I'm satisfied." It feels like half of the battle is over, that the only I thing I need now is a bit of know how, a bit of luck. Because without feeling arrogant, pretentious, or up to my ears in my own self absorbed horseshit, I feel like I can look at myself in the mirror and say, for the first time in my life:

"You are a good writer."