Where In The World Is GoofierBrute? 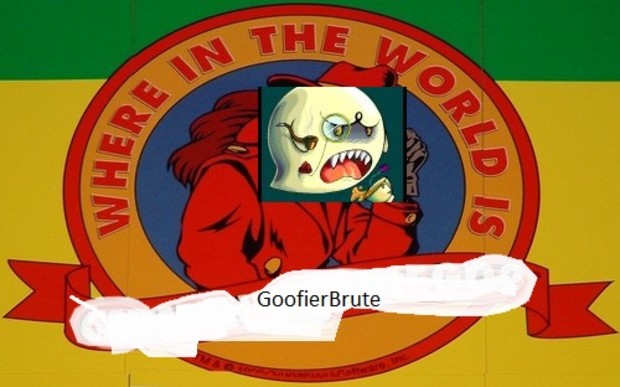 Answer: in the back of a Camaro, in a Jack in the Box parking lot, fapping to his Rosalina, Lucina, and Palutena amiibo while his Pac-Man amiibo and a homeless man peeing outside give him a thumbs up. This has been "Where in The World is GoofierBrute?"

In all seriousness, as some of you may or may not have noticed, I haven't been C-Blogging for a few months, and I haven't been commenting as much as I use to. While little old me not commenting and making C-Blogs as much as I used isn't that big of a deal in the grand scheme of things, I still thought it would be fair to let everyone know what I've been up to these last few months, since I now have some free time to do so. After all, this site has become my second home in the four years I've been here (five this August, which I promise to do something for), and some of my friends I've made in recent years I've made as a part of Destructoid in one way or another. I suppose before I go any further, I suppose I should just say this right now, so as to avoid any kind of confusion: I AM NOT LEAVING DESTRUCTOID. I know that this sounds like one of those farewell posts, but it's not. This place has become a part of me, and through hell or high water, I'll be here until Niero says "fuck it, burn it all down". I'll still be here, talking about video games, anime, Queen, dicks, Gardevoir, and how wrong GajKnight is about Naoto. It's just you'll be seeing a bit less of me c-blogging for the time being, and here's why.

First, let's get the personal stuff out of the way; considering I very rarely open up about myself outside of the net, consider yourselfs lucky. Back in November, my dad twisted his back the wrong way, which immoblized him for awhile. Not long after that, he fell, resulting in him being taken to the hospital. Before any of you respond, let me say that yes my dad is fine now, and that while it took my dad five months to finally get back to what he was before he pulled his back (we found out he has arthritis in his back), I'm happy to say that he's doing really good right now outside of the occasional soreness and cold. Still, between keeping an eye on him, taking him to see his doctors, and working on getting his final affairs in order (we both agreed he needed to do that after his fall) leaves very little time for serious blogging as of late. And what little time I do have to write is left for my new job.

Yes, that's right, in much less depressing news, I have a new job, and it's pretty cool if I say so myself. I'm a Contributor to the website All That's Epic, covering the video game news Monday through Friday.

While great news on it's own (as I've been looking for something like this for years), what makes it even more impressive is that it's because of Destructoid that I have this position at all. You see, after one of my friends who works for All That's Epic noticed some of the stuff I wrote here in the C-Blogs, he let his boss, the founder of All That's Epic, know about me. He liked me a lot, and the next thing I knew, I was writing various stories as a Guest Contributor before being told I'd be a regular Contributor, complete with my own page and everything. I even got to report on E3 this year! I didn't physically go to LA, but I did report on the conferences and everything. And did all of that thanks to Destructoid, so now I can add that to the list of things I can thank you guys for.

Now don't worry, I'm not going to spam the comments telling you guys about checking out my work, nor am I going to write C-Blogs telling you tp go visit me; I'd be happy if you come visit, read a story or two, and even comment, but I don't want to force or bug people to be a part of the community if they don't want to. But if you do go over there, see if you can find me, though those of you who follow me on Twitter might already know who I am (SHAMLESS PLUG). Speaking of Twitter, to those of you who do follow me thanks! And I'm sorry I don't say a whole lot on there; being the idiot that I was, I used my real name when starting my Twitter account, so now I can't really say much on there without running the risk of getting in trouble. Hell, I doubt the few Dtoiders who follow me/Dtoiders I follow on Twitter even know who the hell I am, or if they do, don't really care.

Anyway back on topic, before this gets even more off the rails. In short, I'm just putting this up to let you all know how I've been, why I've been realtively absent as of late, and how things have been turning out for me lately. The way I see it, one-third of you will read this and think that's awesome, one-third don't care, and the rest are wondering why I haven't posted a picture of Gardevoir. But like I said before, I consider you guys my friends (even though I havem't met many of you in person), and since my family and non-Internet friends knew, I figure I let you guys know what's up as well. So yeah; thanks for reading, sorry if this sounded incoherent (I'm wrote this originally at 1 in the morning and it looked a lot worse), and always stay beautiful. Good night, and good luck. Also: