♪ Everyday is great at your Junes! ♪ (June 8th)

To say that I have been playing Persona 4 would be putting lightly. I have been living it. Being in that world, listening to the soundtrack on my walks, thinking about fusions on the pooper, even the sweat off my brow tastes like Persona 4. Though, that might just be a byproduct of the stimulants I've been taking to keep myself awake.

Got any plans for today? Persona 4. What about the following week? Persona 4. Is there anything else you're doing with yourself? Persona 4. How many fingers am I holding up? Persona 4. 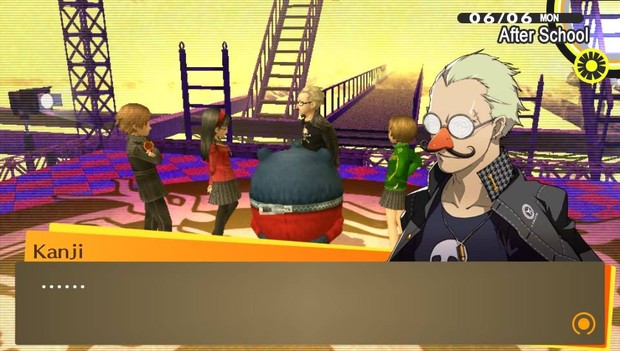 Fresh off of yesterday's intense session, it's fitting that this session was relatively easy-going. About the only thing of note that happened was Kanji being ushered into our queue of party members. There wasn't any rite of passage where we paddled his hindquarters in gas masks or had him run laps around the peak ridges of a volcano, but we did break him in with a few Shadow battles.

I still keep forgetting to change a new member's tactics to "Direct Commands". Rookie almost blew my chances of defeating a spawn of Wealth Hands! Unlike Persona 3: Portable, this game feels much more balanced around being in full control of your team so there really is little reason not to make use of the feature.

I suppose the other options are more suited for grinding earlier sections. 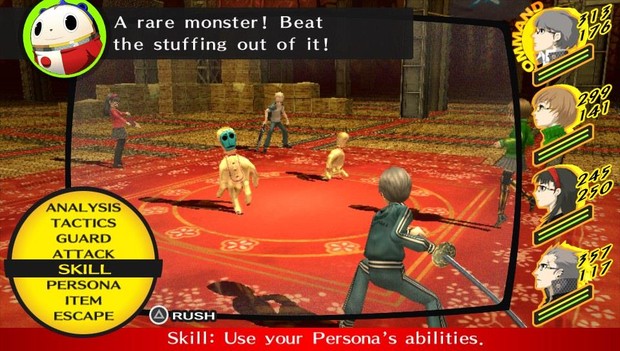 The only grinding I can foresee myself taking part in is toughing it out solo and nabbing all the experience for myself in order to grasp on to those ever elusive late progression skills for certain Personas.

Jack Frost obtains Mind Charge at level 25, you see. I've racked my brain at the possibility of such a glorious skill turning up casually at some point down the line and maybe even sooner than I think, but it's given me a nice excuse to get a feel for exactly how this game is like without several other lovely people to count on to pick me up when hope has turned to doubt and then doubt quickly turns to "Well, at least I can just respawn at the start of the floor.".

If I'm looking to play through this game a second time and so soon, NG+ on Very Hard (where retries are disabled) is definitely the way to go. 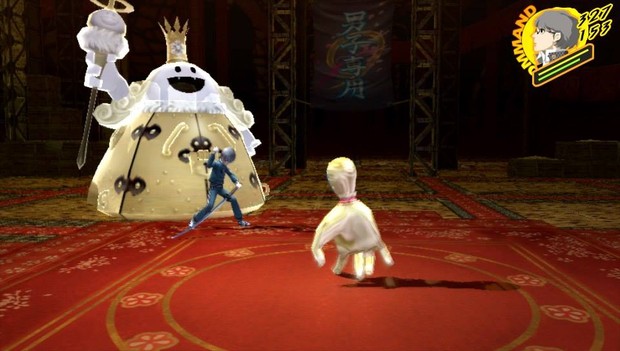 Since I was all by my lonesome and with his moveset limited, Jack Frost was like the child you let win during sports, fights, or cards. Everyone else had to pull their weight and Jack was just there to finish them off.

"Oh yeah, that was all you sonny. You did great. We're super duper proud of you. You want some pizza, tits, and ice cream? Enjoy. You deserve it."

Once I throw him into the Compedium for good, I'll tell him his life was a lie and perpetuated by those he thought were closest to him. 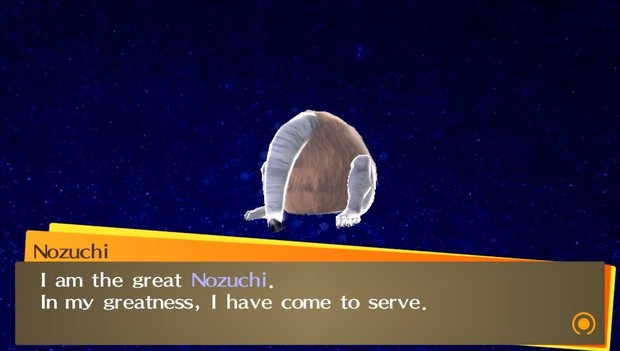 If I were to wind up tape around the left button of a mouse, open up Microsoft Paint, and then play air hockey with said mouse, I would likely end up with something more indentifiable than the above furball. Nonetheless, I traded up Legion for this "Nozuchi" and Phoenix is now almost completely irrelevant thanks to Incubus (who has a cone dick, I might add).

To it's credit, Nozuchi is a powerhouse when it comes to ailments. I almost never used them in SMTIV, but they seem to connect plenty more often in outings such as Strange Journey and now Persona 4: Golden. I love watching Silence go to work, leaving once troublesome twats no more dangerous than a fruit fly. Or inflicting Rage all like "I think he mad." and then slapping them up across the noggin with a folding chair all like "Yeah, u mad.". 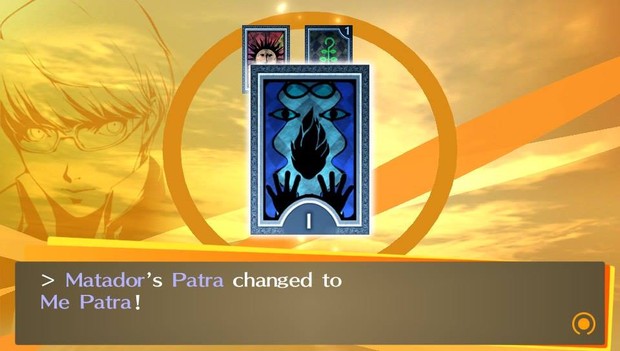 I think I just found my new favorite Arcana card. 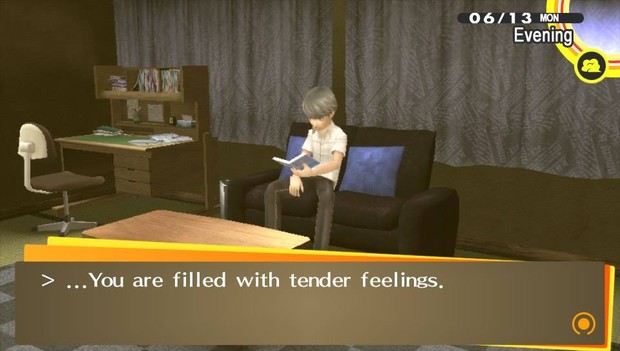 Not a sex book. 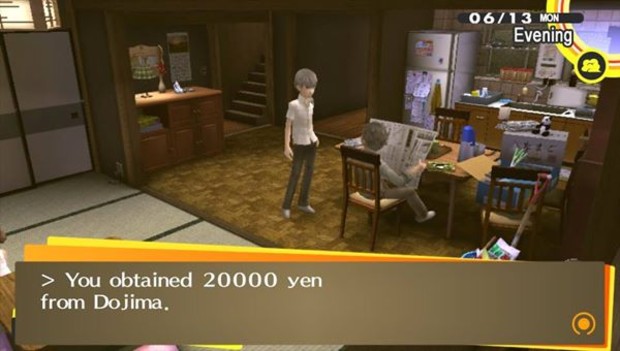 Not quite the modest reward I thought I'd get for my excellent exam scores.

Actually, despite him being a bit of a hardass, I'm beginning to really like Dojima. He now lets me out at night because I asked nicely, he secured me a small fortune, and he handed over his old scooter just for me! He's so close to becoming my daddy. I hope I can ask him about girls without things getting too awkward. God, I just want Yuki-senpai to notice me. 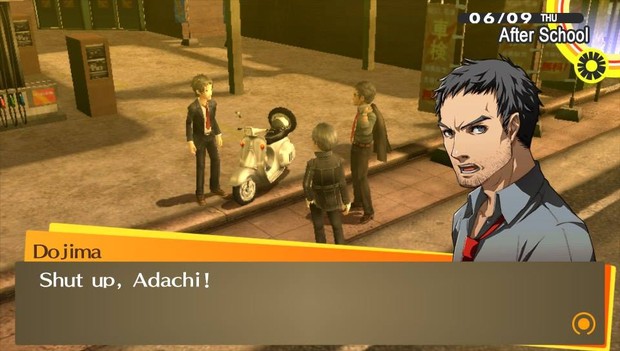 Reminds me of another certain quell/hate relationship. 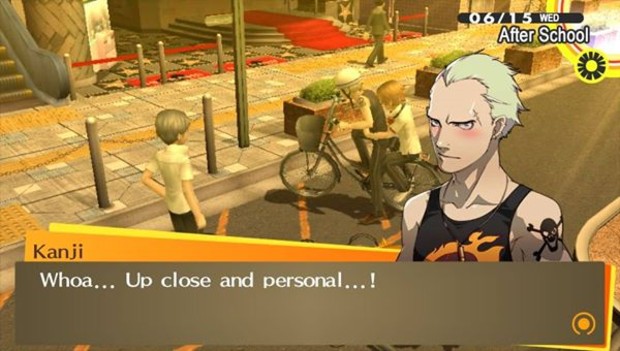 [And now we move on to the daily music and R34 choices!]

I searched up a playlist I'd been keeping track of for a little while and was pleasantly surprised to find it updated with another P4: Dancing All Night remix and by none other than Silent Hill/No More Heroes composer Akira Yamaoka!

It's weird to see so many negative comments on the video. I think it's a splendid remix. I absolutely love the darker edge and the echos/juts of the sampling before the verse kicks in.

I mean, regarding the lyrics... they've always been a little crappy here or there. This rewrite is no exception. I choose to ignore the truth and mix in my own interpretations! You think I'm gonna let that ruin my fun? I guess I've never been one to focus on lyrics. I'm instrumentation/melody first and foremost. 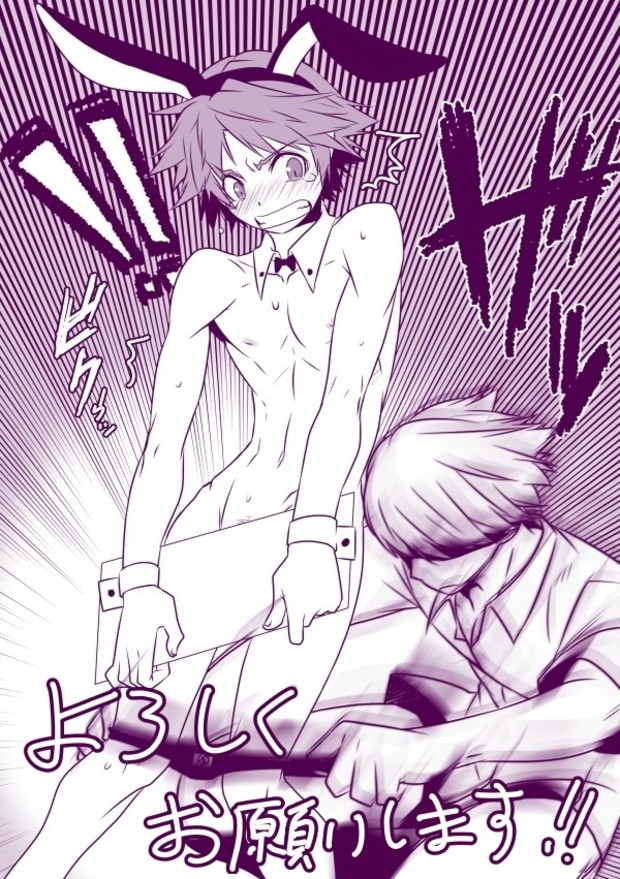 "Now's our chance! Are you ready?