♪ Everyday is great at your Junes! ♪ (June 5th)

Okay. I've got this iteration nailed down. This is my first full session with 99% of the content completely new to me and I have some pretty neat stuff to talk about. There's even some bollocks I should have went over during the last blog that I now find absolutely worth mentioning off-hand in the following paragraph.

Ahem. Did you know that a dried pickle was what netted me the required level of Courage to concur the "beasts" that supposedly dwelled at the shrine at night? That I had no idea co-op attacks were in! I even made this: 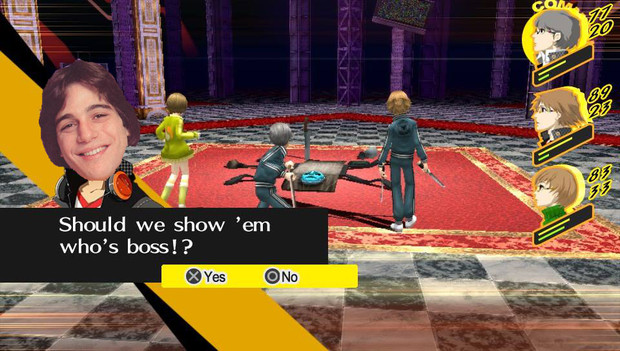 Speaking of segways, here's another! 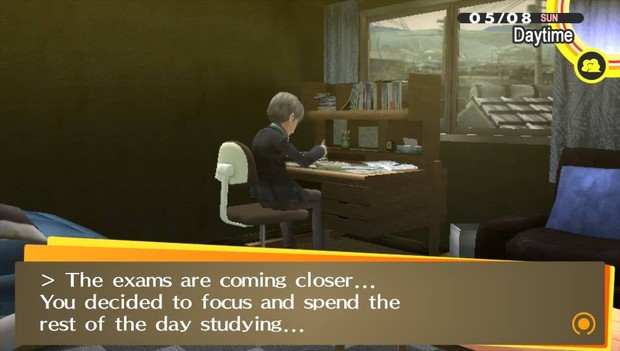 I wasn't kidding when I said this game felt like real life high school. Just without the Proactive, disappointment, or real life consequences. I spent the better part of the days leading up to the exams period studying, desperately trying to raise my intelligence or at least work out exactly why it was I needed to know who it was that translated some trivial English to Japanese that one time.

Thankfully, though, in the end, it seemed worth it! Well, that and actually paying attention to the answers given out almost directly during my classes.

For all my confidence, though, I didn't think I'd actually manage to rank within the top scores! I would've really impressed Yukiko-san if she had been around to see them. I'm not gunnin' for these awesome grades for my health, ya know! 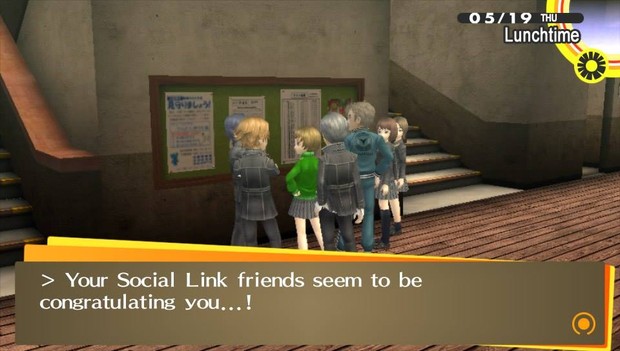 At least Chie and Yosuke seemed impressed. Like that's accomplishing anything. 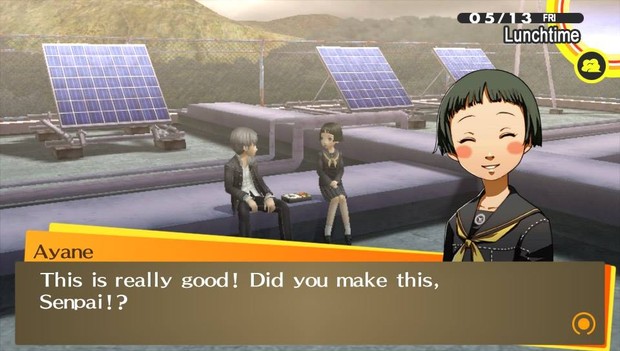 I made lunch for me and Ayane to have together because I felt bad for continuously missing Band practice. 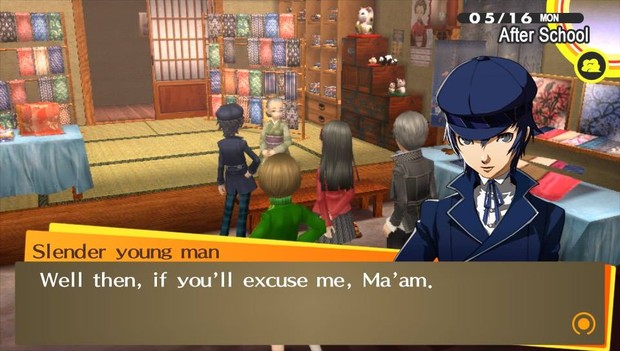 Fun Fact: I actually did think Naoto was a dude for a long time a while back. I found "him" incredibly sexy. But, whether male or the other kind, Naoto is pretty fine. Yes, that's still a fact. "Androgyny" stacks amongst some of the best "-ny" suffix terms around! I think that was an article on Thesaurus.

But, sorry Gaj. Yukiko is still best. However, to be fair, there really isn't much else to go on at this point with Naoto. Much of mine and the game's attention has been on Kanji "Boy Lover" Tatsumi. 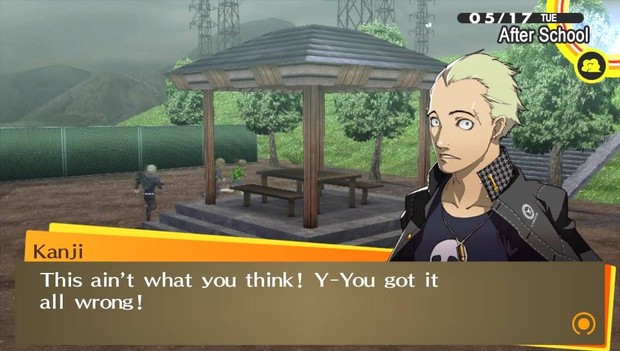 Perhaps it's my biased affection for Troy Baker, but his performance is far and away the best of the bunch. Smooth as ass cheeks and he does some pretty ace yelling without coming off as forced or, in some way, obnoxious. Anger or distress is always a hit or miss with video game VA's. I also appreciate that they kept his introduction short. I don't think we would have gained anything from being beaten over the head with his harsher side to then be finally shown that, suuuuurrrrpriiiiiiise, he's actually completely misunderstood.

After witnessing Yosuke and Chie's "Shadow" selves, any person with half a third of their brain would see the pattern: Each major protagonist has a side of them that manifests into mirrored depictions and you're gonna fight them. This aspect of the plot was kept fresh because the next character, Yukiko, had been much more reclusive than the others. There was an air of mystery around her, so it was nice to have an extremity clear things up and now she's a more interesting, open character for it.

Now, with Kanji, it's clear he suffers from some kind of complex. He's overly-sensitive and often rash. His character beyond such face value attributes aren't clear, so a "Shadow" self is a perfect way to move things along. 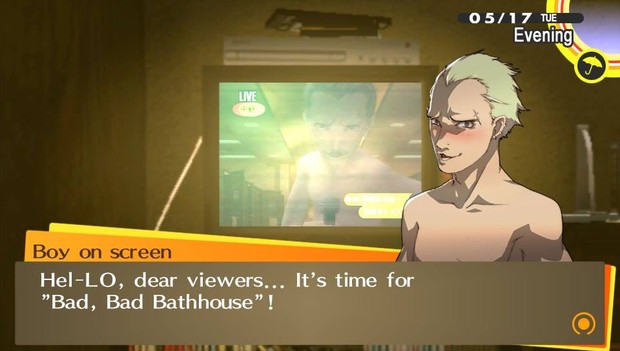 Oh, I wish he was always this cutesy. 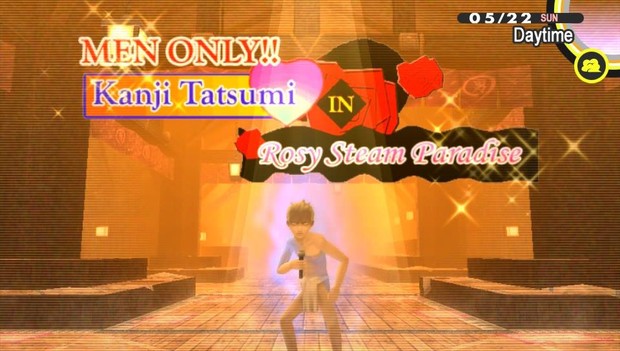 I'd watch it. For the plot, of course. 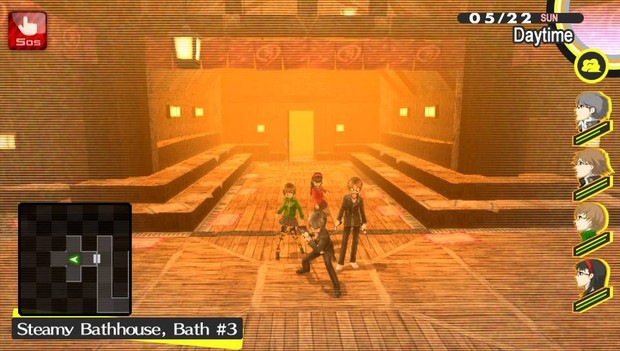 I'm enjoying Kanji's bathhouse a whole lot more than Yukiko's castle. Many of those long stretches of hallway are gone and those square rooms previously reserved for treasure chest locations are now used for the basic layouts. Things are becoming new, more complex, yet slightly less monotonous. Then again, for all I know, there may be some later traversal gimmicks that fly in the face of a good time ala the castle's teleportation floor.

Dungeon-crawling, in general, has been really heating up. 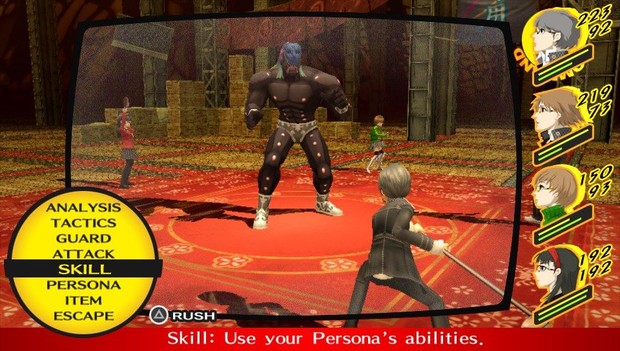 You can't hide behind that mask, Hulk Hogan. "I seeee youuuuu!". 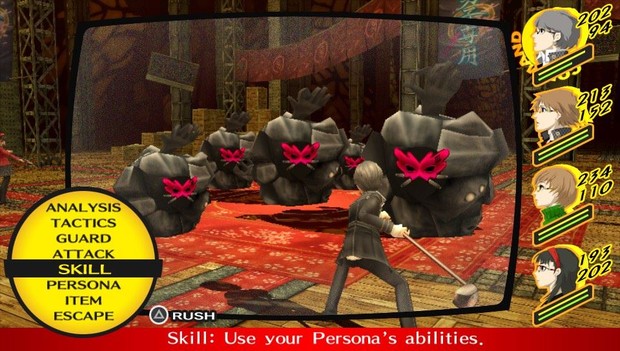 Here we see 5 Golems preparing for next year's Mardi Gras. 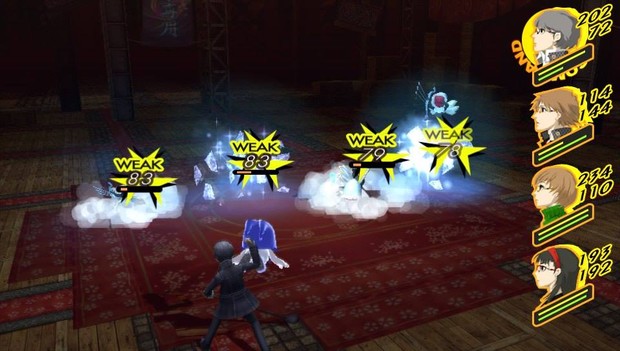 Would you believe that I took on a third part-time job? Between my translating at home, day care during the week, and now a pub at night, I have no right to say that I'm ever without anything to do. Does anyone actually go to bed in this game unless they're forced to? I sure don't. Band, gardening, studying... my main priority, though, besides battling, is managing my Social Link with Yukiko.

More and more, I'm convinced that she wants my weiner. I think my heart fluttered a bit when I asked her straight out for her number while stalking Kanji, with the way she said "Call anytime.". I don't think she knows exactly what it is she's getting herself into, but I'm gonna go ahead and take that literally.

At the very least, I can't let her end up with someone like Yosuke. If that ever happened, it'd be because Yosuke is so darn pushy. Not in a jerkish sort of manner, but he's a rather desperate young man. At this point, given even the slightest hint of a pervish ulterior motive, I turn into Mr. Morooka around him. "You ain't looking to be hitting on some girls now, are yeh? This is an investigation, you little rat! Set that loser brain of your's straight and focus!".

[On into the daily music and R34 choices!]

As much as I may be preferring the actual layout of Kanji's bathhouse, I'm already missing the castle music.

I absolutely love how the raving verse section transitions into that somber breakdown with that frantic percussion line. This is the first dungeon and it perfectly encapsulates the overwhelming nature of the situation for our heroes. Both the terror and feeling of hopelessness. I do really like Sauna, but I think it'd be more suited for a mini-boss than for dungeon-crawling.

I probably wouldn't mind having Muscle Blues as Kanji's dungeon music. That'd always be worth a chuckle. 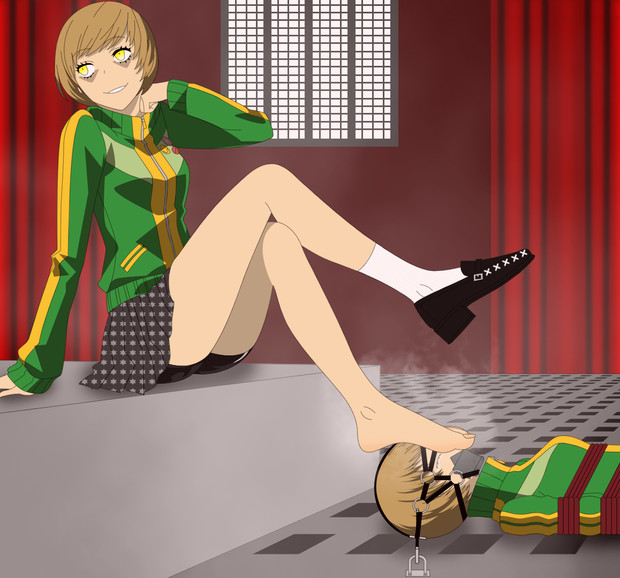 More Chie! I think my goal for tonight will be to find some really good Kanji R34. My choices wouldn't be so limited if I didn't have to exclude the nudey ones. Confounded, Destructoid!