♪ Everyday is great at your Junes! ♪ (June 4th)

I may have forgotten to take out the garbage, I may have accidentally ran my lawnmower over the neighbor boy's frisbee, I may now have a 6th and 7th finger on my left hand thanks to a series of unfortunate events I don't care to get into, but at least I finally made some real progress in Persona 4: Golden last night.

In fact, I've actually past the point I originally quit at! From here on out, it's all completely fresh and I am thrilled.

Well, actually, I may know some vague details regarding some late-game story happenings because, hey, it's the Internet and Persona 4 is a somewhat old game, but it'll be mostly new! Between that and saving Yukiko, everything's comin' up Seymour! 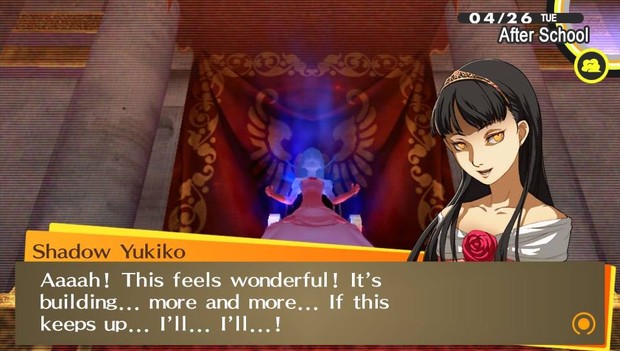 Shadow Yukiko's boss fight was really awesome in that I was able to make some excellent use of my recently-fused Eligor. Since Senri hardly got any spotlight because what the heck's a leopard lady doing with that Raiden cosplay, it was nice to know my hard work during fusion had begun to finally pay off in some way.

With Eligor's resistance to physical attacks, Yukiko's Double Fangs were more like subtle nipple twisters than a sharp poke through the stomach. With both Yosuke and my Eligor sporting Dia, I could stack heals onto Chie to compensate for any damage taken while guarding after her 1 More. Lastly, with Eligor's Patra, I was able to negate both Yukiko and her prince's Fear spells. About all that would have made things easier would be if I was rocking a Bufu attack myself. 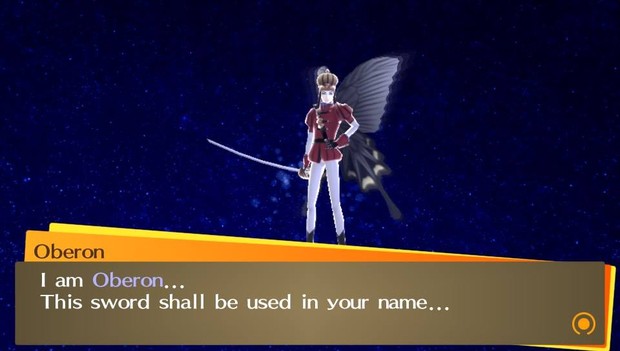 But, hey, you know what's even better? This bamf. Oberon. I still love my Eligor, but Oberon is packing some serious Magic, Endurance, and Luck stats. The latter two thanks to some continuous Arcana draws during Shuffle Time. I'm talking about 4 or 5 buffs to both stats. Also, he doesn't fuck around with Arm Chopper.

When I first began using Oberon and had come to realize my new PHENOMINAL COSMIC POWER, I was already in a good mood as I was coming off the tail end of a streak of rainy days. In Persona 4, much like in real life, rainy days are incredibly relaxing and I found plenty of fun is just taking quick little strolls around town whenever I could. I wasn't even concerned with going anywhere. I just wanted to soak up the atmosphere. 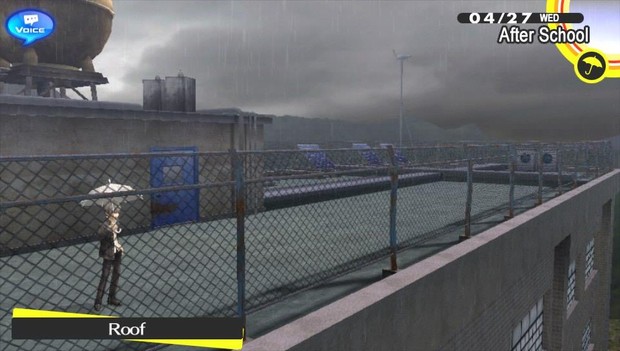 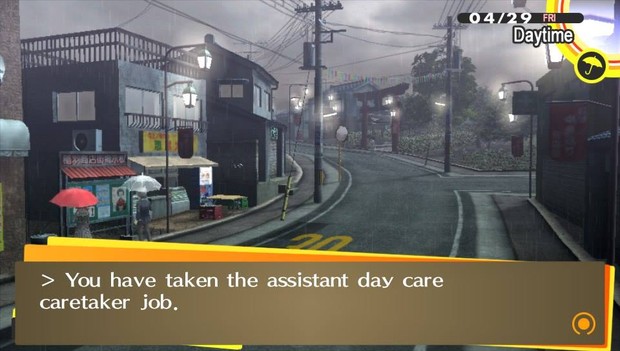 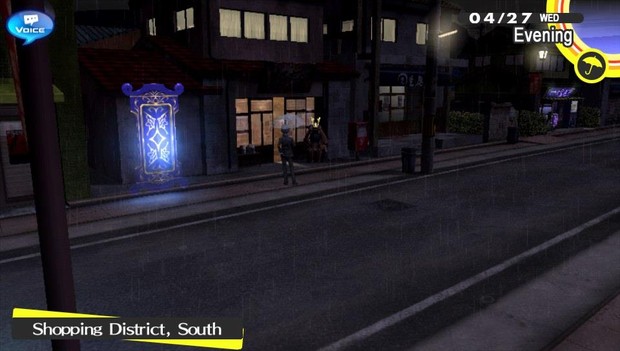 What's this? The metalworks shop is staying open late tonight?

And I get a discount?!

Somebody, get me a towel. 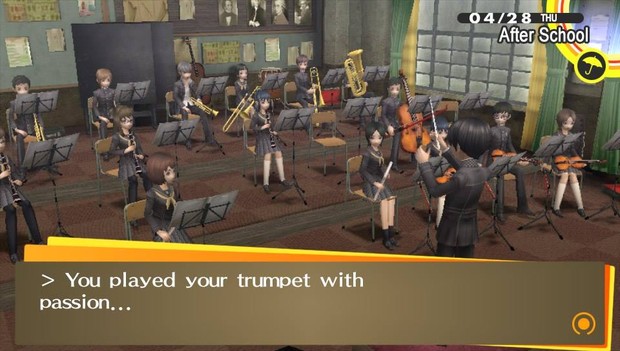 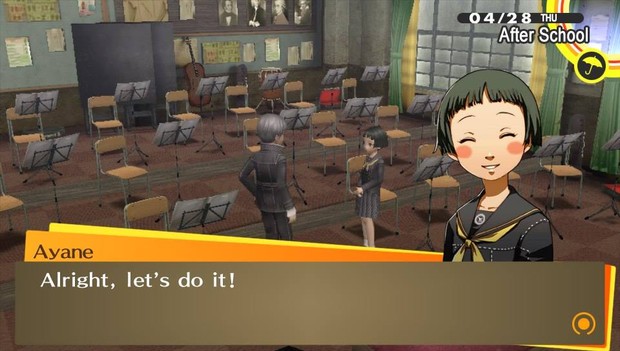 Ohhh m- okay, I really have to cool it with the innuendos.

I think I've hit "that" point in this game. Not quite past the point of no return, but definitely that point where I find it hard to believe I'll ever stop. I've commited myself to more than several fusion chains, I now have two part-time jobs, I've joined Band, I've already spanked more Shadow ass than I can count, and I have an exam next week!

The story has also officially hooked me. As I've been over before, I absolutely love the characters. Even at their worst, most of the cast's performances are stellar. It's like a high-quality anime where you get to play during the filler sections! You know, those little side stories or events that a show might explore that take the main plot nowhere but do offer up some extra substance or lore? And those fight scenes that drag on for several episodes? Now they're character-building exercises that feed into my love of loot and exploration (even if the dungeon designs aren't exactly ambitious)!

I can't say I even have any complaints about the bits with Shadow Yukiko. Much more fleshed out and thematic than either Yosuke or Chie's, it felt considerably less hamfisted. I actually found myself most empathetic towards Yukiko's inner self as, despite her opportunities, she doesn't have the spine to venture out and go against the grain while she waits for the world to sweep her off her feet and make everything perfect. That was basically me for much of these past several years. Something I'm glad to be over with.

I hope this sets a precendent for the rest of the cast. 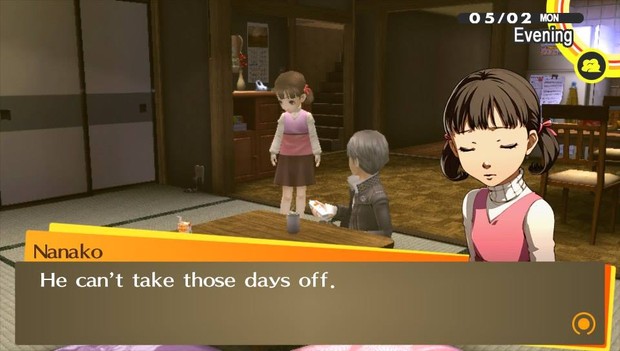 The only character I have a real problem with is Nanako and even she is impossible to hate. She's a dream little sister and adorable to boot.

Whoever performs her voice isn't always perfect at seemlessly portraying a small girl rather than an adult trying to sound like a small girl, but they must be doing something right when I smile literally everytime she's happy or wish to comfort her when she's sad. I mean I got goddamned teary-eyed when she seemed so profoundly disappointed that Dojima had to cancel our Golden Week vacation.

To say that she was excited would be an understatement. Poor little thing. 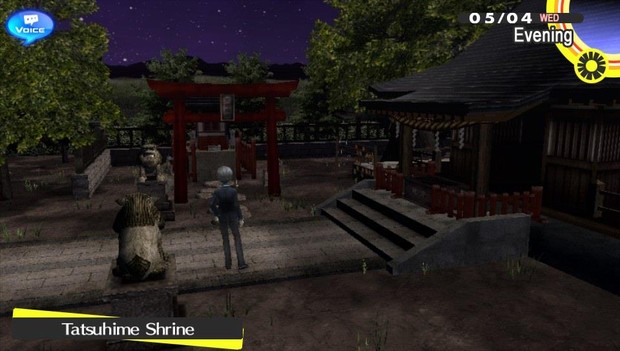 On a lighter note, I now have a big enough dick to venture out to the local shrine at night. I couldn't help but have those ghostly rumors peak my interest and it seemed as if the game was building to something going down there provided my Courage stats were appropriate.

At first, I chuckled at the idea of there actually being nothing. That it just now unlocked access to the shrine whenever. That it was all hype. I prayed at the main hall, searched around for signs of anything at all, then left with a content smirk.

The next day, though, was a pleasant surprise. 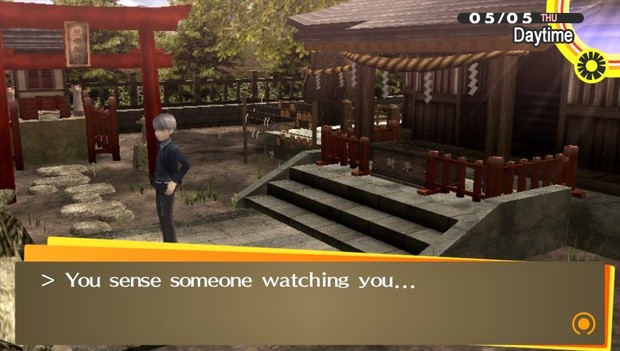 Spooky music started playing and I suddenly felt my body shudder. I actually was just a tiny bit convinced I would have to throw down with a mini-boss or perhaps a Gastly. And me with no Great Balls. 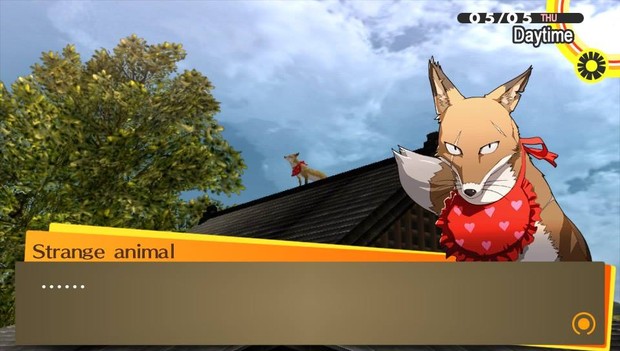 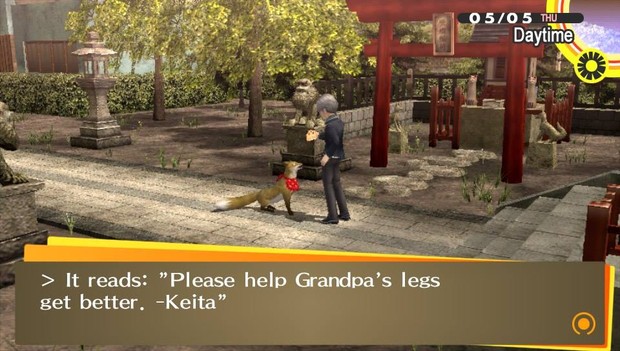 O-oh. You're a messenger? You're here to help?

Better yet, he is the Hermit Social Link.

They pulled a fast one on me. Nothing happened the previous night, I was enjoying a spontaneous cruise over to the Junes grocer, and I figured the game was taking me to the shrine to meet up with one of my sexy friends. What I got was way better and I think I now understand why I've been seeing so many anthro fox depictions of Yosuke around places like Pixiv.

This game just keeps getting better and better.

[And now on to the daily music and R34 choices!]

The original Backside of the TV is an interesting track. It's not often that the female vocalists get to show off their hip-hop chops and the melody hook is far from conventional. Interesting, but still far from a favorite of mine. It suits the game more than it suits itself, which is fine. That's much of the point of video game music, but Persona's pieces have typically been more than that to me.

This remix, however, is the best piece of music I've heard in a good while and is now a big driving force behind my excitement for Dancing All Night. As if I wasn't already incredibly excited. The added layers of sound and progression coupled with the new Lotus Juice's takes really have given this song the identity is should have had from the beginning. If only it had just one more verse or at least a few more measures. 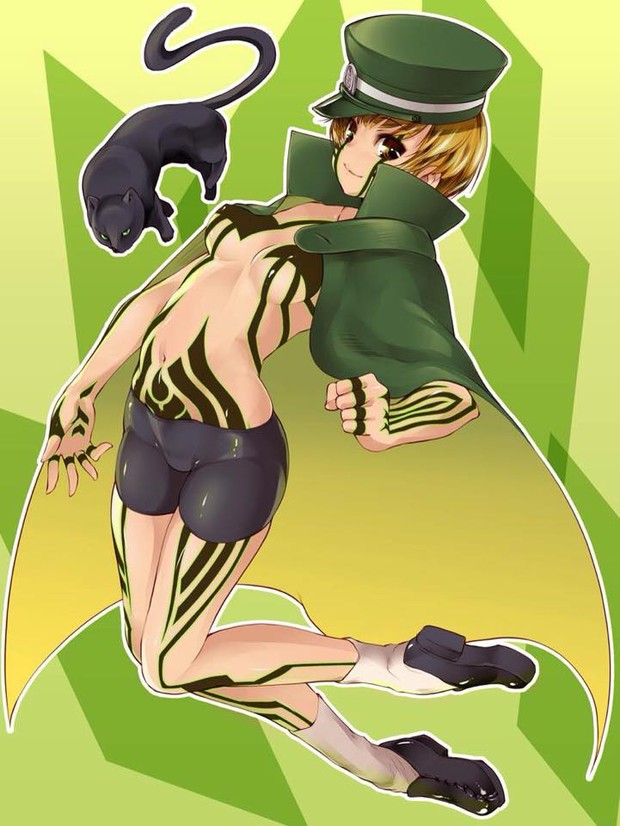