♪ Everyday is great at your Junes! ♪ (June 2nd)

For those who missed yesterday's, let me just say I'm not a fan of you right now. But, it's okay, because you can always read it now!

I'm not kidding. Read it now.

Now, can we move on? It's been a rough couple hours and I am in no mood for any further interuption. I haven't even done my morning squats yet. TODAY IS JUST FUCKED DAMMIT! 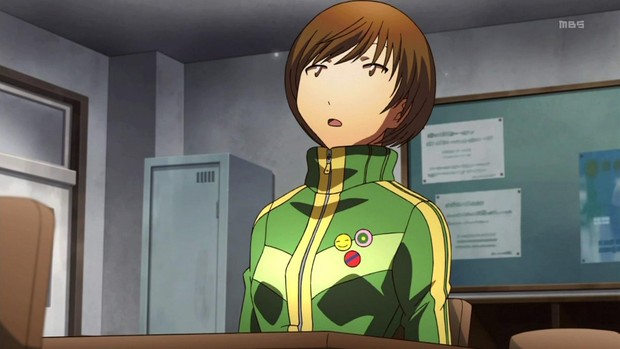 I am the alpha here, motherfucker.

You know who I can count on, though? Persona 4: Golden. What a great game it's been thus far. Not only is it great, but, unlike some mobile games I play and despite it's size, it loads surprisingly quickly. I can get into a game in around 45 seconds to a minute and that includes going through the Vita's home screen and on into when I have control over my character.

Ironically, mobile gaming sometimes seems to forget that ease and quickness of access are part of the point of having something on-the-go. Games I would love to get in a quick few minutes of here or there can have you go through several watermarks and sizable loading screens before the action starts. With Persona 4: Golden, sessions are likely to last at least 10-30 minutes given it's length and wealth of activities, so it's a pretty damn decent trade-off.

Me? Sessions are more like 2-4 hours. And my Vita still sits at more than half charge. I love this thing. 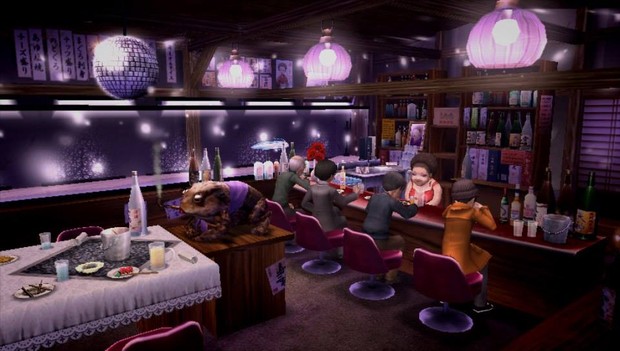 I remember being completely captivated by this setting and then being surpremely disappointed I couldn't do anything with it just yet when I originally played Golden. 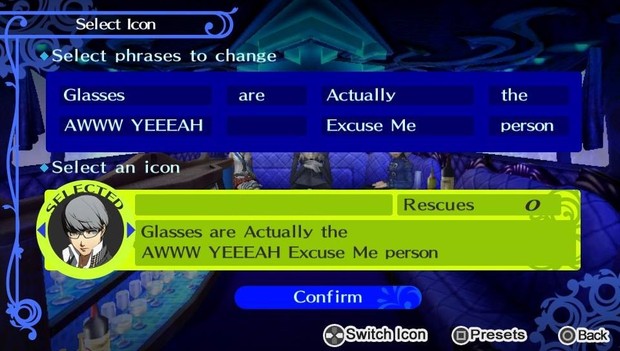 At least I apologized.

Even down to the little things like audio feedback, even outside battles, impresses me about this game. I shouldn't feel so satisfied that I helped Yosuke out during class with a question I had no idea how to answer, but it felt amazing. I didn't know how many chapters some guy did of a book I had never heard of, but I guessed 3 because 2 seemed like too few and 7 seemed like too much. I had no right to, but I nailed it!

> "Yosuke seems to appreciate you" 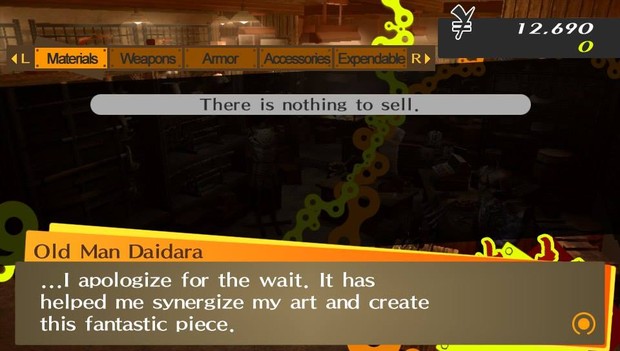 But, boy, did that first *clank!* of the metalworks crafting make me jump.

Interesting how so many people are still playing this game (online). Guess I shouldn't be surprised as it's fucking Persona and not Perfect Dark Zero, but it still made me smile to see so many prompts for for Rescue Requests coming in and sometimes even as many as 2 or 3 people helping me out whenever I put out the call.

I put out those calls because I actually did need help. I don't remember the game being this challenging. I mean, it's not that hard at all, but I was goddamned taken out by a Laughing Table because I wasn't learned enough to focus on him because he's actually a sonavabitch. One "Evil Smile" and my entire party was in Fear. Next turn, Yosuke and Chie ran off and I was left still unable to move. I'm dead now.

And those golden hands? I wasted so much time and SP on them. They actually made me angry each time they ran away. 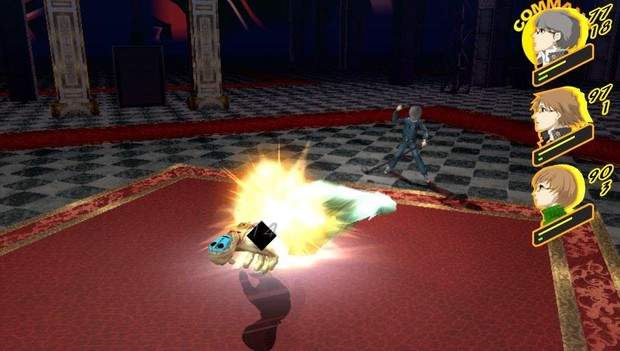 My options were limited! WHY CAN'T YOU JUST BE WEAK AGAINST ZIO LIKE EVERYTHING ELSE?

Because of enemies like him, I've grown somewhat attached to Slime. Resistant against physical attacks, Fears troublesome or slippery foes, and I'm sure to make use of his Red Wall ability (fire resistance) given the chance to efficiently fuse with him.

All my time last session was dealing with stuff like this. I still haven't saved Yukiko. Who, by the way, I have decided to make my waifu when the time comes. It's clear she wants me. On top of that, she's such a sweetheart. Chie used to be who I figured I'd want to end up with, but plans change. I am like the seasons. Or at least my penis is.

But, hey, speaking of fusions... 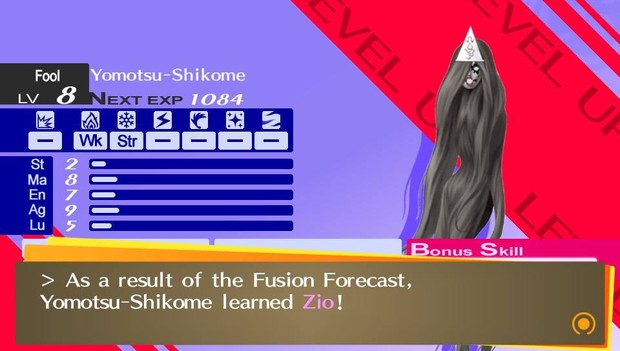 This was probably the very first fusion mishap I've experienced throughout my time with SMT that actually was beneficial!

For one, I can't even fuse Personas past level 7 as of yet! That's already pretty hype. But, not only was she a much better pick than Sandman and past the level barrier, but the "Fusion Forecast" gave her an extra and very useful skill! I intended that last bit to happen, but it was the cherry on top of this creamy, chocolatey fusion. Now I know how that Reese's guy must've felt. 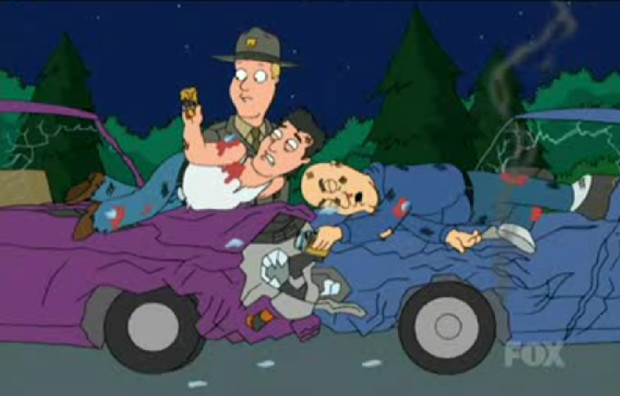 [On to our daily music and R34 choices!]

This was actually the song that started it all. A friend of mine was playing this over a game of Left 4 Dead and I couldn't help but ask "What is this funky-ass groove, yo?". "It's from Persona 4!", he replied.

It's the perfect music to stroll around town to. Smiling from ear to ear, got my shades on, big steps forward, enthusiastic sways of my right and left arms, and a song in my head. That outta drown out the voices.

I guarantee I would have made playing Persona an eventuality given the astounding popularity of the last Persona 5 trailer, but who knows when I would have actually played any of them?! I'm very glad I got into them when I did. 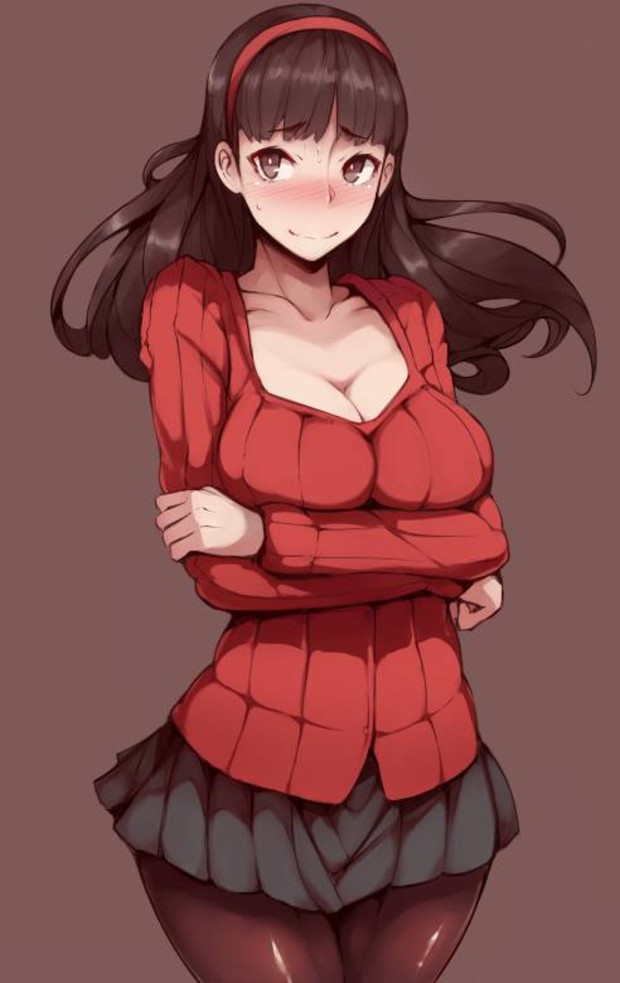 In honor of my new best girl declaration, here's some Yukiko with boobs the size of her noggin.