A Report From The Front Lines: Amiibo, Wave 4 Release.

The night of May 28th was a bad night to be out in Fort Myers, Florida. There was a fire on the northwest side of town, which ensured that the night air was not only full of fog, but was also full of smoke in addition to the smell of burning wood that made everyone crave barbeque in a weird, morbid way. You couldn't see the streetlights in front of you on the main road. Someone needed to plug in the expansion pack so we could have got some goddamn high-resolution in this town.

My first stop was Wal-Mart. They only had two Amiibo: Pac-Man, and Charizard. Or, as the employee said, "The Yellow Ball and the Lizard Guy." Who doesn't know who Pac-Man is? Really? Eh, whatever. It was a late night. The last thing the employee probably wanted to do was carve open a box of plastic toys for people. After that ordeal, it was off to bed, 'cause I had to get up early in the morning.

I got up at 6:15 AM yesterday. I don't normally do this willingly. Usually it involves a lot of "Ugh" and "Goddammit", but today I was ready. I cleaned up, put on my Destructoid T-Shirt and hurtled down to Target. This was the site that greeted me:

From left to right, that was their place in line. The two in front had actually been there since around 3 AM, apparently. That takes some goddamn dedication. Props to them.

A line quickly formed, of course. I was 5th in line. About 10 other people showed up, give or take. Most of the employees had no idea why we were standing in line. The few that did were unaware that there was going to be a line for Amiibo.

Oh, but there was. I was going to get a Jigglypuff even if it severely inconvenienced me.

Most everyone in line was going for Jigglypuff, but others were gunning for Robin & Lucina. I have those two coming in the mail, so I'm good on that front. All I wanted was a Jigglypuff. Oh, and a Silver Mario. I forgot about that one until someone in line mentioned it was going to be available.

When the doors opened, we all walked single-file to the Electronis department. They let us in one at a time, and limited our purchases to two per guest. I didn't have a problem with this, but a lot of other people certainly did. A few people in line were complaining of the policy, because it meant that they couldn't get a Jigglypuff if they were getting Robin & Lucina, or they could only get Robin and not Lucina if they wanted a Jigglypuff. This screwed a lot of people over, but I can understand why they were doing it. They ran out of Jigglypuffs a little after 8:15, as far as I know. Stock-wise, they had about 30, according to Brickseek, but that may not be entirely accurate.

After that, most people at the store headed right to Toys R Us. I didn't care about my place in line there, for reasons I will explain below. Instead, I went to IHOP. 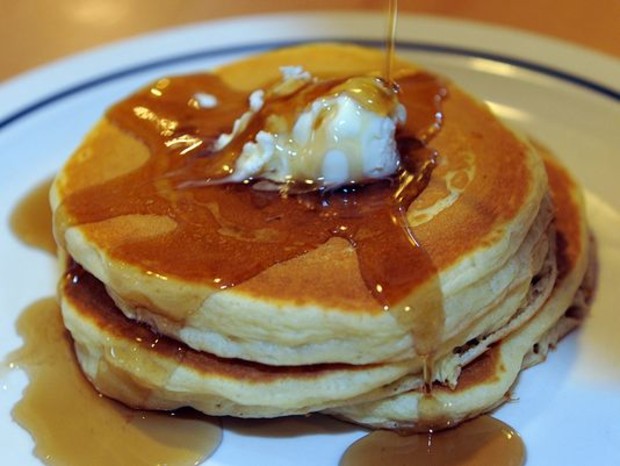 Literally everything comes with a side of pancakes: My beverage, my entree, my friggin' check...

Toys R Us was packed.

Alright, this wasn't the full line. Here's the front:

Someone in the line didn't want to be photographed, as you can see. One dude is flipping the bird at me, because of course he is. I think it's too funny to leave out.

The people in line were all really cool. It was an absolute blast talking with them, as they are some dedicated video game fans with a love of little plastic figures, just like I am.

Now, I know that I made a pretty big deal about Toys R Us' tactics in my last Front Lines post, but today was a different story. One of the people in line had the foresight to talk to someone in the store, and he was spreading the word that they had approximately 70 Greninja Amiibo to sell. This is pretty crazy, since I'm pretty sure that Toys R Us' previous exclusive Amiibo, Lucario, only sold about 70 total, judging how hard it is for people to find one of those things. One store, 70 Amiibo? Of an exclusive? I didn't hold my breath. I wasn't buying it.

This was pretty awesome. It solves at least a small facet of the problem with Amiibos right now: The fact that you can't get these things in stores outside of the most common ones. Toys R Us had enough Greninjas to spare, it seems. A friend of mine walked in on her lunch break and was able to get one without issue, two hours after they opened. I am concerned that they won't be getting any more Greninja after this huge initial shipment, but it's a step in the right direction.

As for inside the store? Well, when the store opened its doors, we all walked single-file down to the electronics department, where they had Amiibos arranged on a table. They had 2 each of Robin and Lucina, Plenty of Greninjas, and a good supply of everything else. They even had five or six Marths, that were immediately snapped up, of course. Still, six Marth Amiibos in one place. Better than what it was before.

I did indeed take a photo of the inside of TRU, but since there is an issue with privacy in a place of business (that and the photos are very blurry), I'm not going to post them. But know that the whole thing was a madhouse. There was a single-file line, which was good, but people were jumping around to look at the Amiibos on the table, people were holding on to their stuff to dear life. The staff was friendly and they expedited the checkout process so the line would move. Awesome stuff. I walked out of the Toys R Us R-Zone with a shiny, new Silver Mario, which went to the owner of 8-Bit Hall of Fame, a local video game store.

But Titannel, didn't you go to Toys R Us to get Greninja?

Indeed, I did. I definitely got a Greninja. However, in the interest of full disclosure, I must admit that I was given one for free from the manager of the Toys R Us. I do not know why this was done, and I don't know if it will ever happen again (nor do I expect it to). My best guess is that one of the employees or a manager heard me talking about the craziness from the Greninja pre-order event, and they knew I was a fan (and a regular customer to the store for numerous other things, as well). Either way, this was really nice of the store manager, and I appreciate it immensely.

This Amiibo hunt was fairly painless for me. Hell, I went back to TRU with a friend and he was able to get a Grenina himself, and that was significantly later in the day (I didn't buy another, because that would have been a hell of a dick move to that awesome manager). Most everyone came out with what they wanted, and that's a far cry from what happened at Gamestop during pre-orders, or at TRU during their Greninja Pre-orders.

Unlike Chris Carter's experience, the Amiibo scene in Southwest Florida was pretty pleasant. Yeah, Robin and Lucina were scarce, but at least people actually had a chance to buy them due to store limits. I actually saw them in-person, which is more than I can say for King DeDeDe (which Gamestop never got in for me) or Meta Knight (which I had to buy from Best Buy's website, site-unseen, back in December to even get a chance at it).

Oh, and I picked up Splatoon at Gamestop. Gonna play that like crazy soon enough. They had plenty of Amiibos, too.