Welcome to Saturday Stuporcade! In each edition of this new series, I will chronicle my journey through an episode of an old game-based cartoon and provide undoubtedly incisive commentary on the wacky adventures within! I won’t necessarily cover every episode in a series, and I may skip around between shows, but I’ll do my best to cover the most interesting or noteworthy installments. You can check out the Episode Guide here [COMING SOON!]

For this introductory entry, I’ve taken a look at what I consider to be the quintessential animated videogame adaptation: The Super Mario Bros. Super Show. I decided to start, fittingly, at the beginning with Episode 1: “The Bird! The Bird!”/”Neatness Counts”. The 80s may have been on their deathbed by September 4th, 1989 but their stench is all over this show from the very start. Hold onto your butts; there’s a lot to cover here between the episode itself and establishing the show itself. 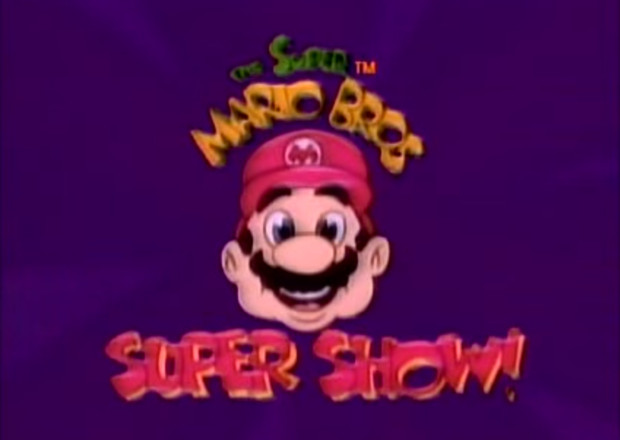 A bombastic instant-classic theme-song opens the show (and wastes over a minute of valuable time!) on a properly ridiculous note. Stars Lou Albano and Danny Wells prove they’re in it for better or worse by whole-hog hip-hopping their way through the infamous “Plumber Rap”. Like most cartoon openers, this one is desperate to make you ADORE it from the outset, insisting several times that “you’ll be hooked on the brothers” should you surrender your valuable time.

After this sequence of surprisingly fluid animation and exhaustively expository gangsta rap, the scene is properly set at Mario Bros. Plumbing, a cheap-o warehouse resembling nothing more than Peewee’s Playhouse post-hurricane. Mario and Luigi, portrayed in these live-action segments by the same wrestler-canadian duo who voice them, are preparing for their evening plans. As they cooperatively clear their bodies of pasta like friendly monkeys harvesting ticks, they hear a mysterious voice from their medicine cabinet: Baywatch Heartthrob Nicole Eggert! 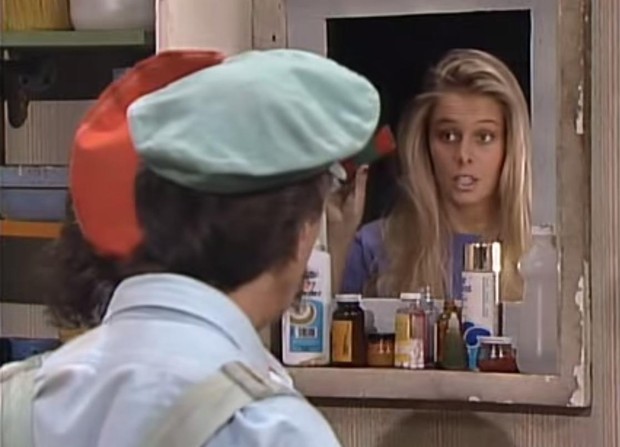 “I was checking the expiration dates on your toothpaste!”

Removed from the context of the era, this guest spot has little impact, but that’s okay because the show has no idea how to utilize her anyway! I had no idea who Eggert was before watching this, and I learned nothing about her from it. Her character also remains a mystery, and aside from the toothpaste line we’re given no reason for her presence. Each episode of Super Show opens this way, with an unimpressive-even-for-the-time guest crammed into a loose story filled with lazy slapstick comedy.

As the brothers try to impress her by fixing a sink (causing it to backfire and soak her, HAWHAW!) the show hits us with a goddamn SECOND THEME SONG to introduce the animated meat of the episode. It provides 30 additional seconds of crucial explanation for the deeply-layered tales soon to unfold, explaining how our heroes flushed themselves down the drain to the Mushroom Kingdom where conflict rages between the natives and the evil forces of King Koopa. The Bros. are depicted as animated characters before and after they flush themselves, lazily squandering at least a half-decent explanation for why the characters switch forms between formats. If the sleep-inducing opening segment didn’t already tip you off, not many people involved with this show seemed to give much of a damn. 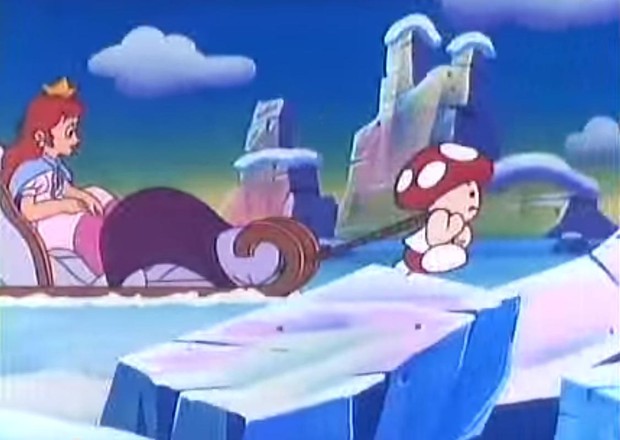 Toad: The Face of Indentured Servitude

Unlike the live-action parts, the animated segments provide an actual story with above-zero production values, which makes you wonder why the show doesn’t just open with these parts. The writing is shockingly competent, and the opening moments establish the four main characters quite well.

Toad, the ever-faithful mushroom retainer, is an interesting combination of cantankerous old man and silly child. He’s hot-blooded to the core, and continues pulling the Princess’s sled out of loyalty despite his constant groaning and griping. It’s an interesting take on a character who had no real characterization in the games at the time, since the story-lite Super Mario Bros. 2 was the most recent release during the show’s development. His voice is grating but fitting.

Princess Toadstool, often referred to as simply “The Princess”, enjoys the ride, demonstrating her lazy 1%-er attitude. When Toad is kidnapped by Birdo (thinking its her baby) she snaps into action and leads the charge on his rescue. This the closest thing to “leadership” I’ve seen any incarnation of this character exhibit, and is infinitely more interesting than present-day Princess Peach. The very normal voice tinged with regal mannerisms is spot-on, if not an outright amazing performance. 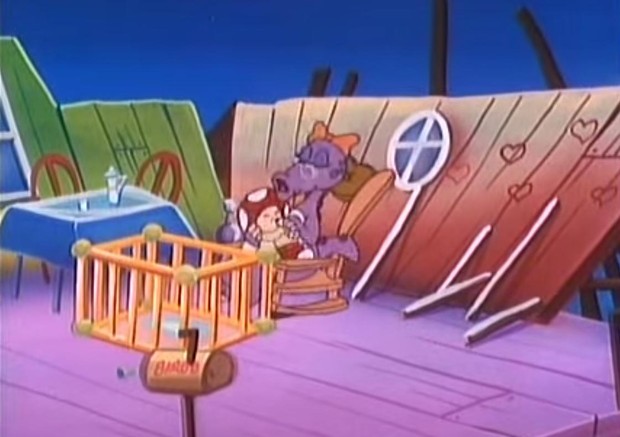 Luigi is reluctant to heed action’s call; his shaky voice and neurotic facial expressions really sell his trademark reluctance. Let’s be clear: Danny Wells is the best thing about this whole stinking production. He’s clearly committed to the character, and he sounds like he’s having a hell of a good time. Nintendo clearly agreed, since this portrayal would go on to define Luigi’s character from then on.

Mario, on the other hand, is a brazen-to-the-bone do-gooder with relentless energy and an eagerness to please the Princess. He wastes no time getting down and dirty when required, often rushing headlong into danger. Lou Albano provides a goofy, carefree performance despite his gruff voice and it totally works. Listen, Charles Martinet is my man, but I’d not be able to stand his perma-falsetto jabbering for minutes on end. Thank god this show predates him landing the job by several years. Albano effortlessly sells each Shatner-esque narration at the beginning of each adventure, which give more exasperating over-explanation to these desperately simple affairs.

Once the quest-of-the-week is underway some surprisingly sinister Flurries observe from afar, cackling that they can’t wait to put the Bros. “on ice... FOR GOOD”. They then report to their boss: a quintessentially “bumbling 80s cartoon villain” incarnation of Bowser known as King Koopa. He’s quick to humiliate them for daring to treat him with respect. He’s a despicable tyrant, which is underscored by his Megatron-in-a-garbage-disposal voice. 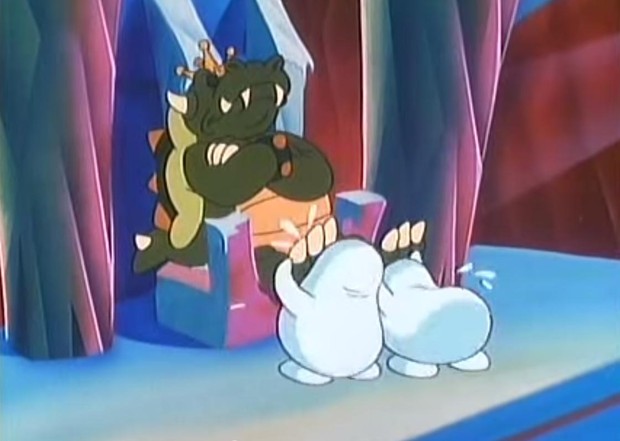 He then orders an air raid of Bob-Ombs thrown by Albatosses(mistake theirs, not mine) while Birdo, still under the impression that Toad is her child, takes him out for his first “flying lesson”, aka throwing him off a goddamn cliff. Mario finds a Fire Flower, which the Princess informs him will make him into “a SUPER Mario”. After playing patty-cake to summon Pasta Power with his brother, he uses this to blast Koopa’s minions to hell (Luigi’s tells him to “cook their super goose!” with devilish delight). Toad, after falling against recycled background over and over, takes off his mushroom hat(!) to use as a parachute, landing near his victorious friends. 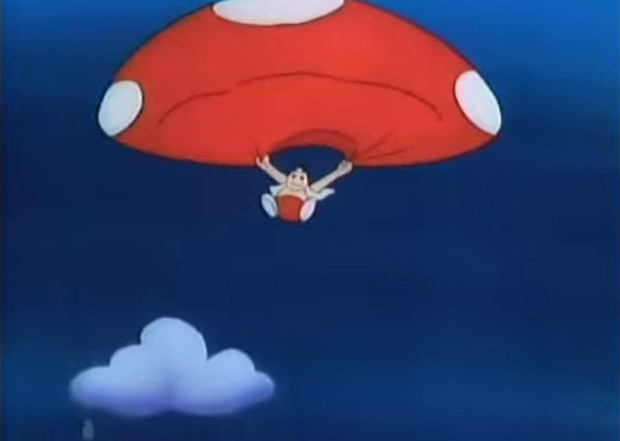 After some convincing from the rest, Toad grumpily embarks upon one last journey up the mountain to return Birdo’s actual child, who they apparently discovered while I was busy packing a bowl to help me survive this endless progression of tripe. The elated mother then serves them worms, which Mario mistakes for his beloved spaghetti because he’s blind and a moron.

With that heartwarming adventure wrapped up, we’re back on the mean sets and streets of Brooklyn for a conclusion to the thrilling antics of the live-action brothers. They manage to dirty Eggert again and again, even causing stray debris to tumble in from the window (doesn’t seem to bother them), which smashes her from above. 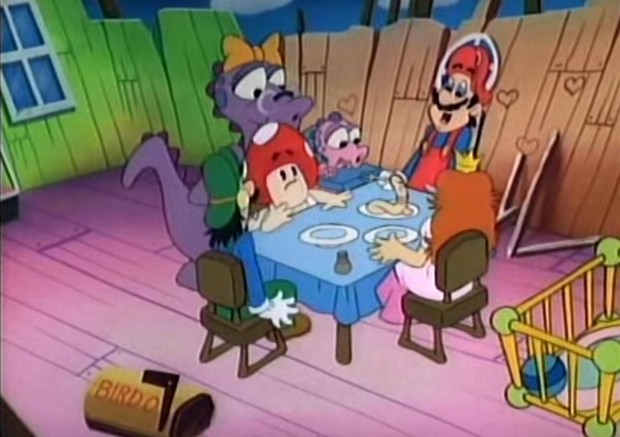 After taking a brief break to sneak-peek footage of this week’s The Legend of Zelda episode (I’ll have to get to that one eventually), they apologize profusely. It’s all good, though, because she had been on her way to a “sloppy party” where the goal is to show up as dirty as possible (presumably taking place at Trump Tower). They share a hearty laugh, making me envy the easy amusement of these richly-defined characters. 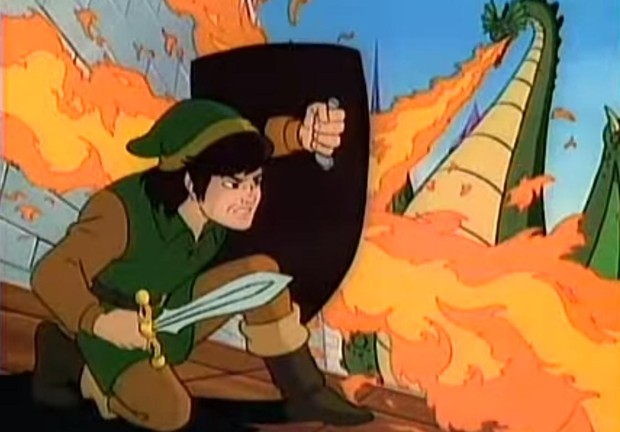 The Super Mario Bros. Super Show is an odd duck. Working with the scant storyline material of the first two games, the creators at DiC were forced to create most of the affair from scratch. The live-action segments are ceaselessly dull, with “big names” stopping by to make lame jokes and get smacked around by cheap props. Nearly every one of the 65 episodes would follow this format, and repetition of this painfully simplistic material does it absolutely no favors.

It has a lot of oddities, like Bowser(sorry, “King Koopa”)’s half-Wart design. In fact, it primarily incorporates settings and characters from Doki Doki Panic/Super Mario Bros. 2 despite that game not taking place in the Mushroom Kingdom. Looking back on this show as a relic, it’s startling how much attention was lavished on the Subcon elements, given how widely ignored SMB2 is today. This lends everything an appropriately surreal quality, and though probably unintentional it makes the show a worthy footnote in Mario history.

There are a lot of ingredients for an interesting Mario show in this first episode, but they don’t add up to anything substantial. In spite of some strong characterization, the writers don’t seem to have any solid plans for what their heroes should actually do. Everything feels limp and inert in a way that would have been difficult to overcome, had I been sober. I had originally planned to cover every episode of this show, but I’m questioning the wisdom of putting myself through 65 episodes of this in a row.

See you all next time! 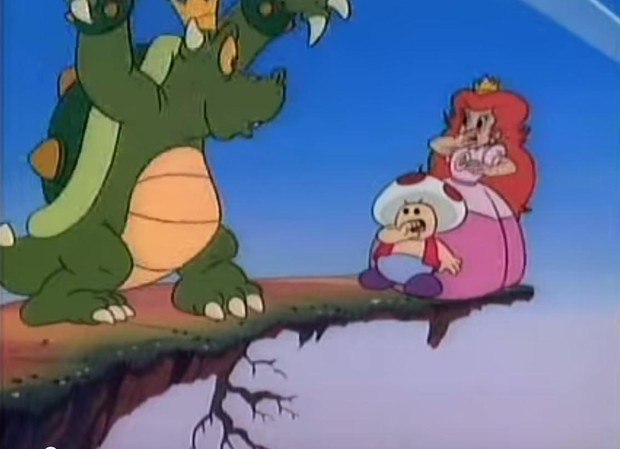 This is the ugly face... of being hooked on The Brothers

Whitey is prone to overthinking stupid things and under-thinking important ones. Most of his time is spent playing handheld games while binging on podcasts. He has a penchant for less-than-classic games, bad movies, and terrible television.

Disclosures:
-On friendly terms with PR folks at TellTale Games