Unequal Equality: Is this the future our heroes should be fighting for?

Yesterday, at long last, Chroma Squad finally launched. It comes after a successful Kickstarter campaign followed by a long and arduous development period plagued with legal issues brought about by good old Saban Entertainment.There are hopes of ports on the horizon, ports to the PS4, Vita, and iPad, but I'll wait for confirmation before I get too hopeful.

I've been playing the game for a little while now, and so far, while it's very much improved from early betas, the writing has some issues that are... pretty hard to ignore if you're a nitpicky sort of person. Grammatical issues, flat sounding dialogue, and emoticons thrown in all over are among my chief complaints right now, but beyond that, it's a fairly solid game that I think RPG fans, Super Sentai fans, and/or people just with nostalgia for Power Rangers could probably get plenty of enjoyment from for its fair asking price of $15. It's not the most in depth RPG in the world, no, but for the price and getting to make your own Super Sentai team and matching giant robot, it's definitely worth a try, I think.

Sadly, going through this game will not make Gardevoir Sentai Destructoider any more official.

That said, this isn't why I'm writing about Chroma Squad. I haven't beaten it yet and I want to really sink my teeth into it before I write an in depth response to the game itself should I choose to. Considering how much it's improved since early betas, I want to give it the benefit of the doubt about some of these things.

For now, I'm writing about the game because of the story of a particular stage, or "episode" as the game calls them, that really struck me as off. It's an early one in the first chapter, or "season," so there aren't major spoilers here if anyone is worried, though considering it just came out, I do hope that qualifies as warning.

Before starting the episode, your heroes talk about how they need to have someone to save like in the "real" superhero shows. One of your characters suggests their sister, who, according to them, really wants to be someone saved on a superhero show. If the character in this role happens to be the beaver or robot character, that might open up a whole other can of worms, but let's touch on those at a later date.

Anyway, to give some added context, your characters are stuntmen who have started their own studio, so it seems perfectly logical that one of them might have a relative who would want to use their connection to maybe get a bit part in an episode. I mean, if I had a relative working weekly on a Super Sentai series, I'd wear a dress and a wig if I got to be in one for a week, shoot.

Regardless, point is, your team needs someone to save and one of your characters has a sister who has apparently wanted this enough for them to pop right into their head as soon as the topic comes up.

Another of your characters takes issue with this, though. Because a woman needing to be saved from distress like that would be sexist.

And this is what happens. 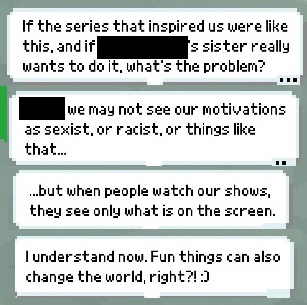 The solution the team comes up with is, in order to avoid coming off as sexist, they'll find someone else — someone male — to be the "damsel" in distress.

Does anyone else see the huge, glaring problem here?

WHAT THEY THINK THEY'RE DOING:
By not placing a woman in the "damsel in distress" role, they have avoided doing something sexist and have helped pave the way for equality in video games and media!

WHAT THEY'RE ACTUALLY DOING:
By refusing to let the character let his sister take the role, what they're actually saying is that if you're a woman, you can't have or do what you want if it could potentially be perceived as sexist. They've also denied this person's unknowing sister what may have been the chance of a lifetime.

This brief exchange pretty much sums up everything that is wrong with all of these arguments about equality in gaming and media right now.

Obviously, this is just a game and just a very brief series of exchanges at that, but if we can use that argument here, why is it that that argument doesn't apply elsewhere about things that are "just" games?

According to this logic, women can't do what they want if the things they want could be seen by the world as "sexist," so they have to do things that aren't. By following this doctrine, we'll have equality for sure!

Except that's just forcing women into a new role. Rather than promote equality, all this does is shift women from one role to a new one — ironically, it's almost as though people want women to have less rights and less representation, because they certainly don't seem to want women to have freedoms.

Because that's what equality is supposed to be about — not covering yourself up or beating up the other guy that used to be bigger than you, but getting to just be. Real equality would mean a woman would be able to be a damsel in distress without it being a problem, because she wouldn't be a "damsel" in distress, but a "person" in distress.

In a game about superheroes, this exchange was about as unheroic as it gets, don't you think?

It's the same for race, sexuality, and just about everything else, too. A black character will get flak if they act "too black," but conversely, if they don't, then they're "acting too white" or "not black enough" and people will say the character isn't one viewers can relate to — you can't win. And if they character is a drawing, how they're drawn is bound to bring up comments too. This extends to real life too.

And just look at how it hit the creators of this fictional show in this game. Look at the message it's leaving here.

If you want to create something, you better not include a woman in it. Even if you're fully aware you aren't sexist and your actions aren't being done with sexist motivations, even if the woman in question wants to or would want to be part of this creation and has zero issue with it, it doesn't matter. Tough luck. When consumers take in media, they only take in what the media is offering and can't consider factors like that. Factors like that don't matter. What people want doesn't matter. The only thing that matters is whatever the current social standard is and making sure no one gets hurt feelings, apparently.

My goodness, with what a dangerous topic this is, gosh... It seems to me like we better take extra special care to not put women in any situations that could offend anyone. We're trying to change the world after all, right?

Let's not women do or be represented in anything at all.

Even if they want to do it.

Especially if they want to do it.

Thanks for teaching me such an important lesson, Chroma Squad.

A Message From Zetta:
To those of you dealing with other issues around the Community Blogs regarding what's been going on with the site and its staff, I apologize if this comes off as insensitive given the timing. I considered waiting a few days to post this, but I feel like if the site is going to stay open and if people are going to be sticking around, then life needs to go on. With consideration to all of that, but knowing that I really don't know what is going on and thus probably shouldn't be sticking my nose any deeper than I already have by offering this, I just want to say that for those of you leaving the site, I wish you well, and I hope that you'll still keep writing and find somewhere you'll be happy doing it again soon. Don't let that spark die! As for those of you staying, while I can't say I've been the most social butterfly around, I do hope to get to know you all better in the coming months and beyond!

And for everyone who read this, sarcasm and all, whether you comment or just skimmed, here's some love from me to you. Close your eyes now!

Hey there! You seem to have taken a wrong turn, friend. Front page is thattaway, and Zetta is currently on vacation, in a manner of speaking.

But hey! If you actually do mean to be here for some reason, then hello! Although I am not really here at the moment, when I am active, I go by Zetta around these parts, I am an enthusiast of all things Kamen Rider as well as most things Vita, as well as all sorts of other nonsensical nonsense. Good times!

When I'm not busy writing annoyingly long comments, you can find me here, writing annoyingly long blogs. I dream of the day everyone on the internet can get along and be friends, like an annoying anime protagonist...'s even more annoying love interest, and in the meanwhile, am dreaming of putting my wordliness to good use in something creative someday, lest my existence be completely wasted.

My console of choice is the Vita, my favorite Kamen Rider changes with the tide, and I really have no idea how to end this at this point.

Time for a pose!