I (inadvertently) stole one of my favorite games

I spent most of the PlayStation 1 era obsessed with Japanese role-playing games. I blame Final Fantasy VII, mostly, since it was the first game I ever bought with my own money, causing it to become the standard by which all other games were compared.

Since then, I have maintained a certain fondness for the genre, but JRPGs don’t really hold the same special place in my heart that they once did during those pre-teen years.

There is one game, however, that I will proudly fly my JRPG flag for any day of the week. Suikoden II, released by Konami in 1999, is not only my favorite JRPG of all time, but one of my favorite video games ever.

It’s also the only video game that I ever stole.

Maybe stole isn’t the right word. Maybe it is. Ultimately, I’m not the judge. Through a couple of shady moves by my ten year-old-self and some dumb luck, I procured a copy of Suikoden II through very unlikely circumstances. I’m not proud, but fuck it, I got the game for free.

During the late 90s and early 2000s, everything I knew about video games came from hours spent pouring over back issues of Electronic Gaming Monthly at my local library. Dial-up internet was still par for the course, and my parents would rather forcibly drag me away from the computer than let me tie up the phone line looking at video games featuring spiky haired kids fighting androgynous men. (I got my comeuppance by faking a fever and getting to miss school, only to print out a full FFVII walkthrough that was something like 70 pages). Despite internet-related reservations, I was afforded free reign at the library, where I used my time in a way that any self-respecting adolescent would: pouring over video game magazines and checking out Redwall books. 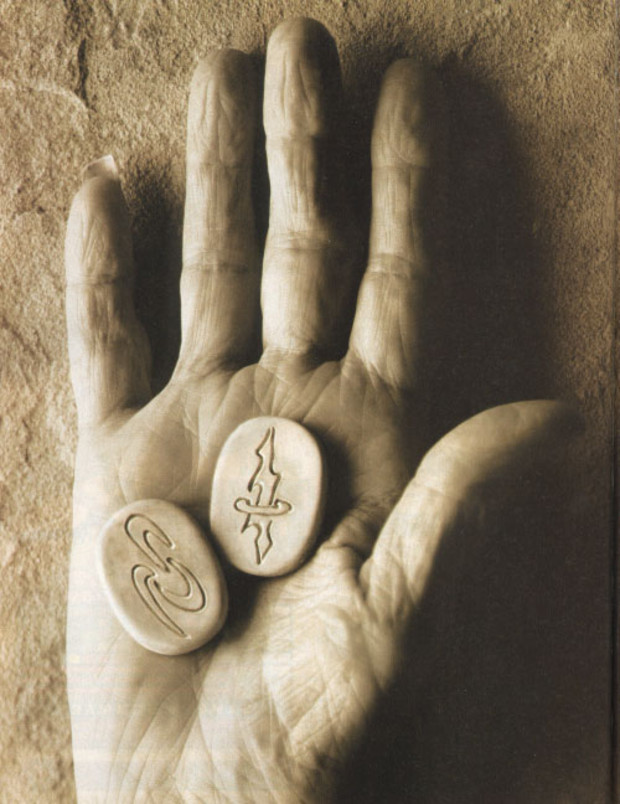 It was in one of those tattered EGMs that I came across the ad – quite possibly the only one at that – for Suikoden II. It was simple compared to the absurdity that was video game advertising in the late 90s, but utterly entrancing to my youthful eyes. A two page spread, the left side featured a weathered hand, two smooth stones nestled in its wrinkly palms, inscribed with strange markings. The right page contained a cautionary message.

“For temporary relief of Dragon’s Breath, Monster pains, or Battle fatigue; Take 2 as often as needed.”

Below that, ‘Suikoden II’ was written in blue letters. I knew nothing more about the game other than that two page ad, but I was sure that I wanted to play it.

Similar to how I learned about video games from reading magazines at the library, the majority of the games I actually played were rented from a local video store. While I would often try to hustle a few dollars here and there by doing chores around the house, being a kid meant that I didn’t have a steady influx of cash to buy whatever games I wanted. Thankfully, my parents were always happy to let me rent whatever I wanted from our local mom and pop video rental store. 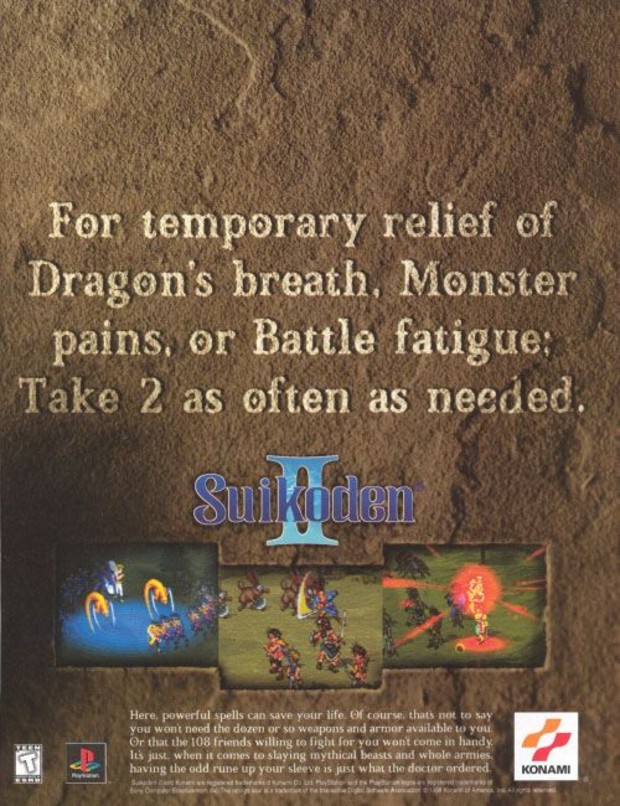 It was at this store, Franklin Video (rest in peace), that I feverishly searched for Suikoden II. Week after week, I poured over the PlayStation games the store had in stock, but never saw it. Eventually, Suikoden II left my mind.

In the middle of 2000, I rented Thousand Arms. Most of the game’s subject matter went over my head, but I loved the game. I played it (to the best of my abilities) religiously, but didn’t make it to the second disk by the time it came to return the game to the store. It was at that moment, I made a conscious decision to keep Thousand Arms. In what can only be described at ten-year-old stupidity (or brilliance), I came up with a plan.

I switched the two Thousand Arms discs from the rental case and put Wild Arms 2 back in their place. I figured that because both games had Arms in the title, I could return the case, continue playing Thousand Arms, finish it, and then claim ignorance the next time I went to the store. I’d give them their game back and I’d get my Wild Arms 2 disks and everyone would think I was just a dumb kid, not a devious mastermind like I saw myself.

A couple days after making the swap, our house phone rang. My mother called me upstairs from the basement, a confused look on her face, and told me that it had been ‘Franklin Video’ on the phone. I distinctly remember thinking that I was screwed. A cold rush swept over me and I prepared to come clean.

“They want you to come to the store,” she told me, “there’s been a mix-up with a game you rented.”

For all intents and purposes, I thought my ten-year-old ass was busted. My mom suggested that we head over now and I complied, silently putting on my shoes, head hung in defeat.

When I got to the store, the manager told me that they had found my Wild Arms 2 disks the other day. He said I must have mixed the names up when I went to return the game and that it happens all the time. He laughed as he said it and shrugged in my mother’s direction as if to say “kids, huh?” before looking back to me.

“The problem,” he started, “is that we can’t find your game anymore.”

For whatever reason, someone had misplaced my Wild Arms 2 disks. At that exact moment, I realized I was alright, I’d get away with my master plan after all. Wild Arms 2, for all of its weird western vibes and absurd moments, would be forever remembered as a casualty in a grander scheme. 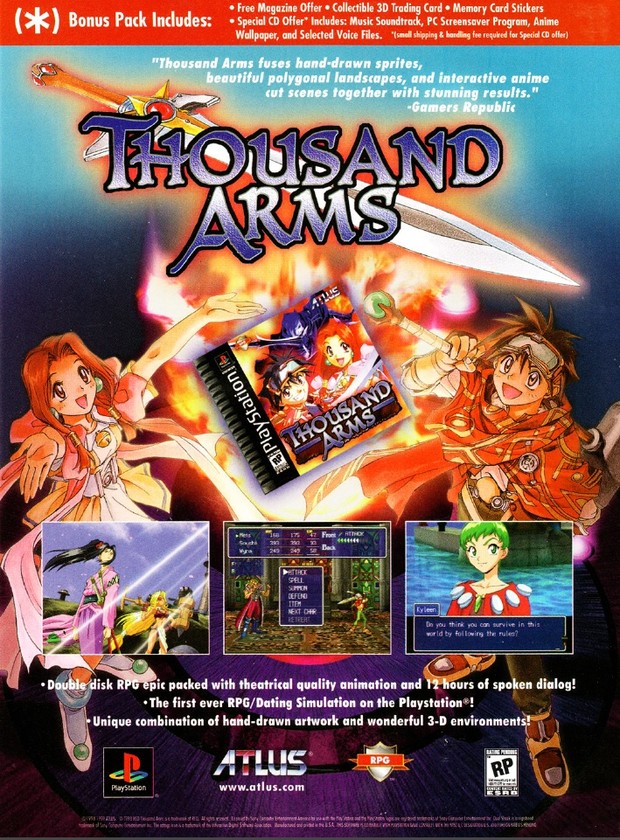 To keep my ruse up, I put on my best sad child face. In order to make things right, the manager offered to let me take any game I wanted from their store and keep it.

Any sense of guilt or remorse fled from my body and I became the happiest kid in the world. I thanked the manager and wandered through the wire-frame aisles, subjecting each game with a level of scrutiny that I couldn’t imagine mustering now.

And then, at the last aisle, I saw Suikoden II. The images of the black and white ad that had captured my attention flooded back in. Without a second thought, I selected it as my game.

Since that day, Suikoden II has been a perennial favorite. I know that the circumstances surrounding its acquisition aren’t the most honest, but I was a kid and kids do really stupid things. I played through the expansive RPG with a reverence that is hard to describe. To me, the game was perfect. I proudly took control of the Wolf Army (because wolves were and still are bad ass), and battled against Luca Blight. I reveled in our victories, recruited talented warriors to our cause, and shed tears when allies fell in combat.

And then, years later, when I was moving across the state, my disk broke. I guess you could say it was karma. To this day, my broken copy of Suikoden II sits on my desk, reminding me of how powerful games can be. It also serves as a reminder that stealing shit and lying to people isn’t cool, but I think everyone should know that by now.