Ooh, what's over there?! #3: With your back up against the Dunwall

Exploration across prairies, in streets, in trenches, in grasslands, in frozen tundras, through deserts, on the sea, in the air, I love every act of exploration that can occur upon this earth.

Violence can be fun, and so can strategizing. In fact, videogames are fun in many ways. But to me, nothing beats the feeling of being transported to a new world with all sorts of amazing new things to see and do. The feeling of looking to an unfamiliar horizon and going “Ooh, I wonder what's over there?” before heading off in that general direction and no doubt being distracted by something cool halfway there. The feeling of seeing a tower off in the distance and wondering whether you can climb it. The feeling of checking to see whether there is an edge to the sea or not.

It's that feeling this series is devoted to. But don’t think that I'm restricting myself to big open-world sandbox games here. A well-made 2D Platformer can give you much the same feeling, and cleverly hidden secrets can give you just as much incentive to explore as any far-off castle. It's all fair game, as long as you make me want to explore every nook and cranny of your world, and you’ll let me. Invisible walls will earn you a slap in the face, but may not be unforgivable if you have something to make up for them. As compared to the world of Xenoblade or The Wind Waker which I looked at in #1 and #2, Dishonored couldn’t be a bigger contrast. That's exactly why I chose it this time. The previous games featured giant green fields, beautiful ocean vistas, and more flora and fauna than you can shake a stick at. Meanwhile, Dishonored has a drab, grey world where everything tries to kill you and the only fauna you’ll ever see are giant man-eating rats. And yet, Dishonored’s Dunwall is just as worth exploring as the Bionis and the Great Sea ever were.

It's simple really; just because Dunwall is a dirty run-down city doesn’t mean there’s nothing to explore.

First things first though, what is the world of Dishonored all about? Well. Dunwall, as a city, is a shithole. It's a shithole to the point that you start wondering how people even survive in that place. The large town is subject to one of the most corrupt governments ever, and it shows. Homeless are everywhere, there isn't a splotch of paint anywhere in sight, people look freaky and 'off', and the swarms of rats will literally eat you alive. The only thing anyone seems to care about in this place is the whale oil industry, which is not exactly glamorous to begin with, and surviving by any means necessary. In fact, the only places in the entire city that seem habitable are the mansions of the higher-ups, the people with the money and power that probably wasn't obtained in an entirely wholesome manner. Incidentally, these higher-ups will make damn sure that the lowlives down in the slums won't intrude on their luxurious lifestyle.

Doesn't sound like a place you'd want to live, right? Fortunately, through the power of VIDEOGAMES, you don't have to. But you can still take your sweet time to explore...whatever there is to explore in Dunwall. Which is more than you might think. And depending on where you stand you can actually get some mighty good views of the city and its businesses. 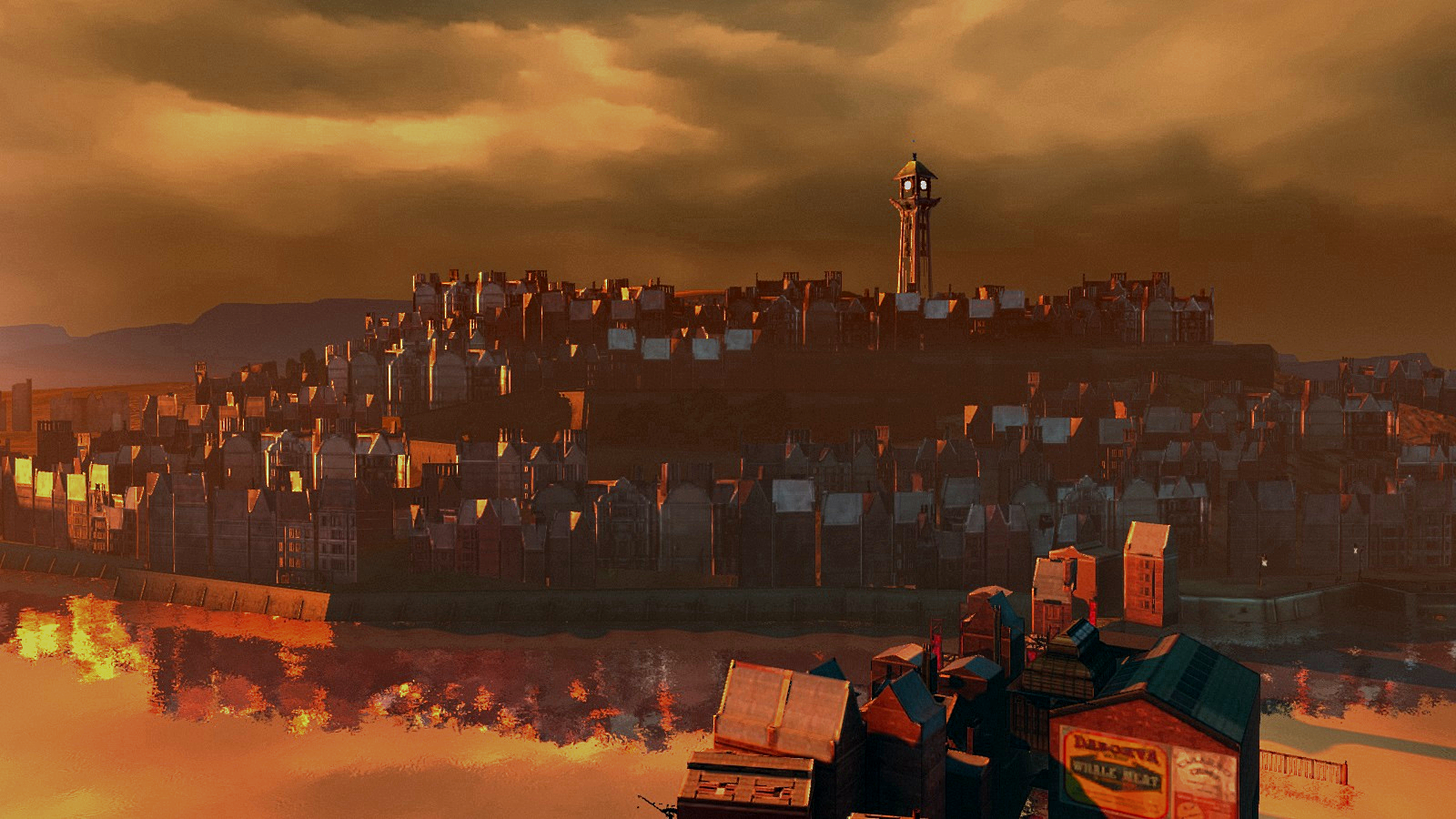 - This is as inviting as Dunwall will ever look.

If there is one thing that I have to credit the Dishonored devs for, it's that they made Dunwall feel like a complete and coherent world. While Xenoblade and Wind Waker were waaaay prettier, they can't match Dishonored on pure sustainability. Dunwall may not be a place where you would want to live, but you can definitely see how it would be possible. You can tell where the houses are, where people might go for groceries or bar-hopping and all the other things you'd do on any giving day. You get insights as to how the city's economy works, who holds the political power, and the importance of religon. It's a sustainable world, it could function. That's incredibly rare to see in video games (or anywhere!) and I'm having a hard time coming up with a better example than this. Few other games let you explore the whole spectrum of a fictional world from the lowest sewers to the emperial palace, but Dishonored does it and then some.

Another commendable thing about exploring every nook and cranny of Dunwall is that it's all functional. No matter where you go, rarely will you find a place that’s completely empty. Rather, money or ammo will be hidden everywhere you care to look, and sometimes you might even find new gear or upgrades hidden in the damnedest places. But that's not the best thing that you can find, not by a long shot. You see, at its heart Dishonored is a stealth game. "Get from point A to point B without being seen". And that's what exploring Dunwall is all about: you want to find the sneakiest route to where you need to go. Even when you don’t find any gold in that alley you decided to check out, chances are you’ve stumbled on an alternative route to your ultimate destination. That sewer you found yourself in might just be the perfect way to bypass those annoying guards upstairs. That tower you climbed might have an open window somewhere, so you can dash straight to your target on the top floor. In Dishonored, every bit of exploration you do serves a very direct purpose. It's all the better for it. - You want to be at that tower second from the left. How many routes can you spot?

Finally, Dishonored succeeds at one very important thing of exploration that I haven't had a chance to mention yet. Exploration is only as good as your means of getting around. That makes sense right? I mean, how much fun is it to explore a gorgeous landscape at a snail's pace? Not much, you still want to feel like you're getting someplace. Preferably someplace you wouldn't be able to go in real life.

The basic mode if transportation in Dishonored are your own two feet. But not long after you start the game, you are gifted with the best thing an explorer could want: a teleport. Called "Blink", this will let you go anywhere within a 10-feet radius or so. You can use it to pass by guards unseen, or to break your fall from a long drop. The most important thing of all, however, is that you can combine it with your already above-average climbing skills to make any rooftop your bitch. From that point on, you can go almost anywhere. In fact, you can go so many places that every once in a while I stopped to wonder whether this was intended by the devs or if I had found a bug of some kind. It has always been the former. Water drains, chimneys, balconies or straight from roof to roof, with Blink the entire city is your oyster. An ugly oyster without any pearls, but an oyster nonetheless.

Combine that unique ability to scale almost any obstacle with the point I made earlier that any exploration is useful for your main objective, and you can see where this is going. No window is safe, even on the top floor of the highest mansion.

Even with my back up against the Dunwall, I'll find my way out.

- Favorite thing 'over there': Kaldwin's Bridge, which I climbed as high as I could. 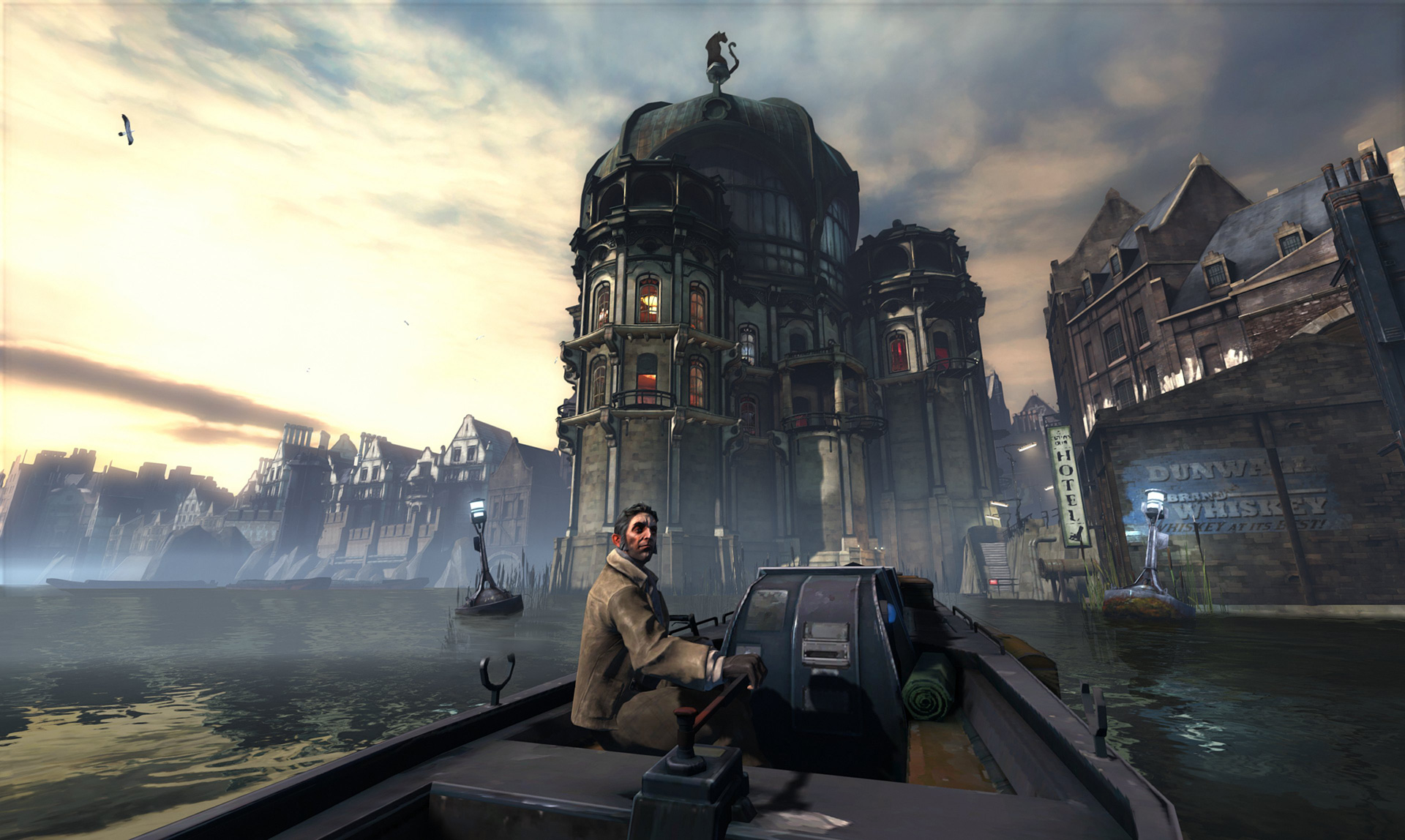